I’ve said this before but I’ll say it again, thank you SO MUCH to everyone that took the time to fill in the 2010 Rock n Roll Bride readers survey. As always, I was blown away by your responses and even though some of the things brought up were ideas I’d already thought of and changes I already wanted to make, a lot of new thoughts and criticisms where also expressed. Hard to read sometimes, but necessary! I certainly have a lot of work to be getting on with (well, my poor web-designing husband does!) but rest assured that I will be making some really positive changes to the site as soon as physically possible.

I wanted to take this opportunity to share the overall results with you all as well as share our overall winner of that amazing bootie of prizes with you. The gorgeous ‘Pie’ won over £900 worth of wonderfulness and I have to say, I was totally sad to post it all away! Check her out: 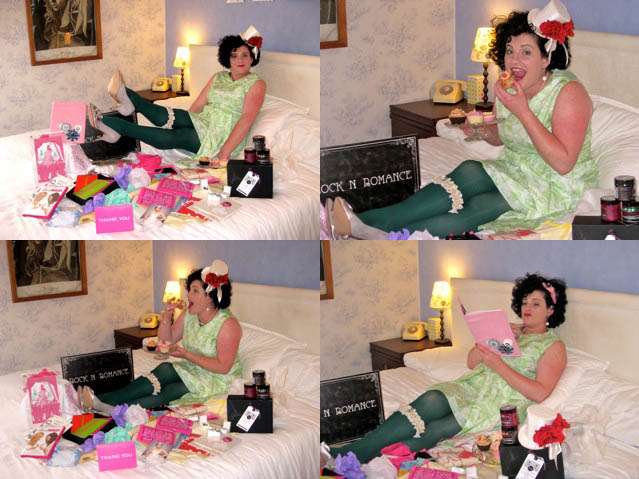 And her 10 year old daughter particularly enjoyed the Manic Panic hair dye – so much so that she now wants pink her for her Mum’s wedding! Starting them off young, I like that! 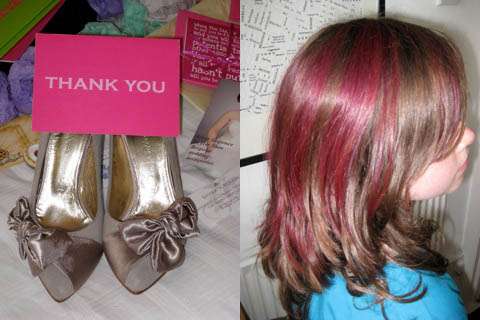 Anyway…on with the results. Huge thanks to Alexis of OMG I’m Getting Married who created these wonderful graphics for me. 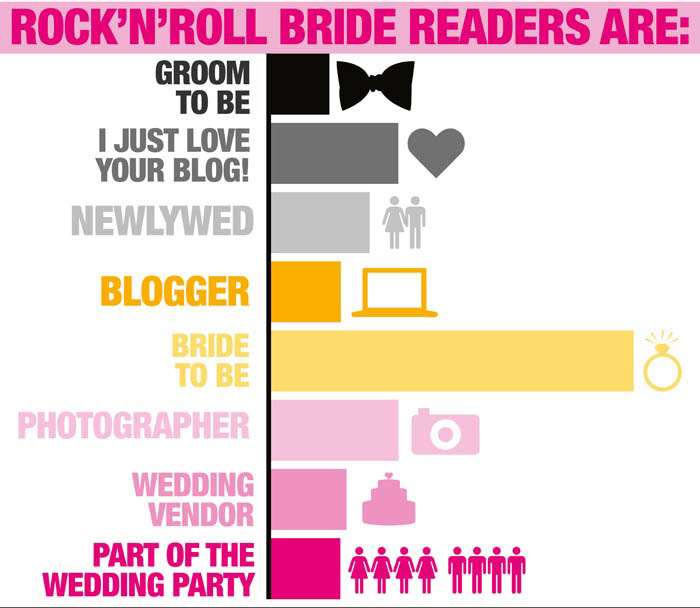 Unsurprisingly, the biggest group of readers are brides to be, however I really wanted to know the ratio between you brides and other wedding professionals/bloggers who read the site. I was pleasantly surprised at exactly how many of you were brides planning weddings, a whopping 63% of you. 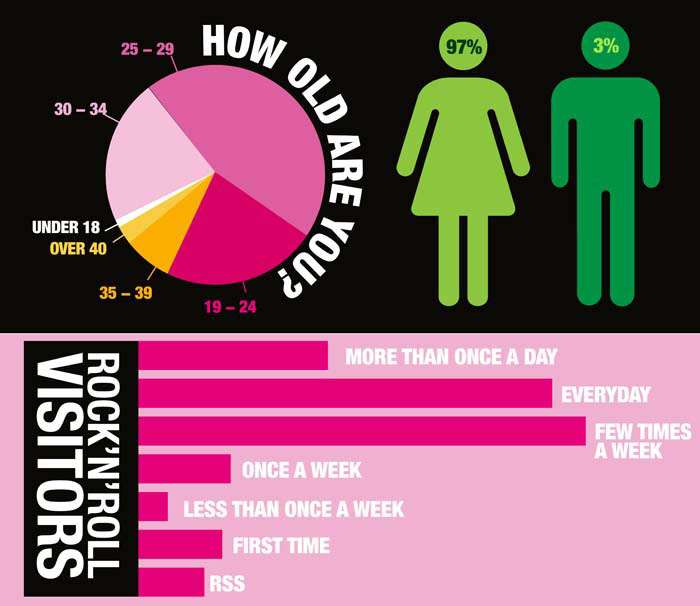 Unsurprisingly again, the vast majority of you were female (97%!) However a lot of you still mentioned that you’d like to see more stuff for grooms on the blog. I’m on it! Let’s get those boys involved shall we?! Most readers are ages between 25 – 29 and most of you visit a few times a week, closely followed by those that pop by everyday!

Although I can see this info with my Google analytics, I thought it’d be cool to find out and share with you exactly where you all come from. Although the US is still the most popular location (and of that, most of you are in California (20%), New York, Texas and Illinois) the UK certainly is creeping up to rival our American friends – and when you consider how much smaller the UK is than the US, I think 38% is quite an impressive number. 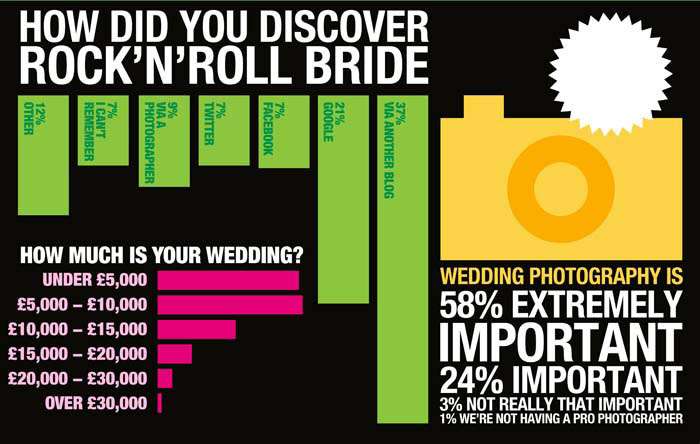 As is the nature of blogging, the vast majority of you discovered me through another blog (37%) with Google coming up a close second (21%)

I am also really pleased that a huge 58% of you regard your wedding photography as ‘extremely important’, with 24% of you saying it was ‘important’ for your wedding. This was by far the number 1 thing you consider when planning and budgeting. Even though Rock n Roll Bride budgets are smaller than the national average (which is apparently anything from £20-£25,000), it brings joy to my heart that you still want to get great photographs. Just be sure to send them into me for potential features after your big day!

It was quite an even split between your favourite types of posts which is great because it means I can keep posting a wide range of weddings, photo shoots and ‘How to’ posts (I’ve actually been posting more of these recently as a lot of you mentioned in your comments that you loved them and wanted more.) However of course actual weddings were by far the most popular features and so I will be giving priority to wedding features over the others in future.

Another positive point was that (the majority) of you love the new blog design and layout. Whist there are certainly tweaking issues (and thank you for telling me – I will definetly be making changes to the top navigation bar in particular) the overall response was positive. A few of you did say you preferred the old header and style of the blog but I’m afraid I wanted a face-lift! I’d been rocking that old header for over a year and it was time for a brand refresh. 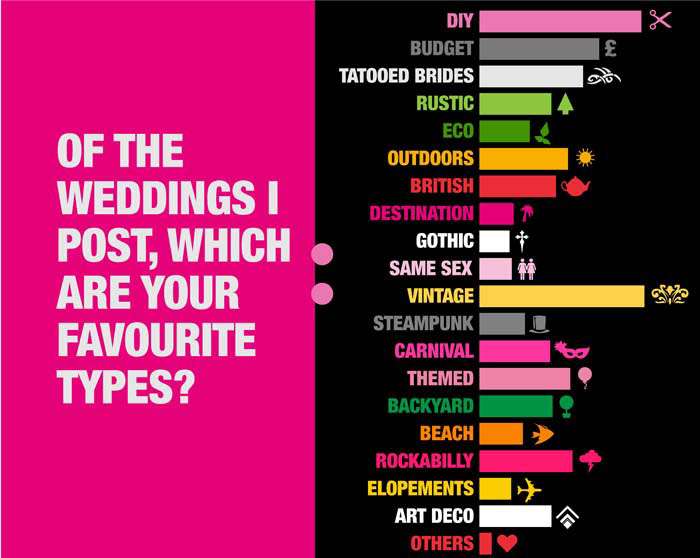 All styles of weddings were popular (yey!) but particularly diy, budget & vintage (which unsurprisingly was the way the majority of you described your own weddings! See below…) 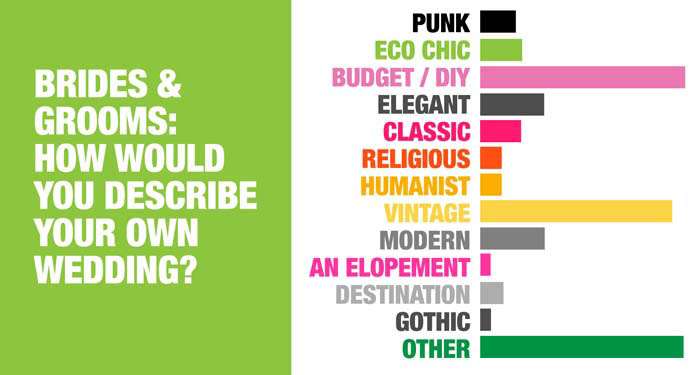 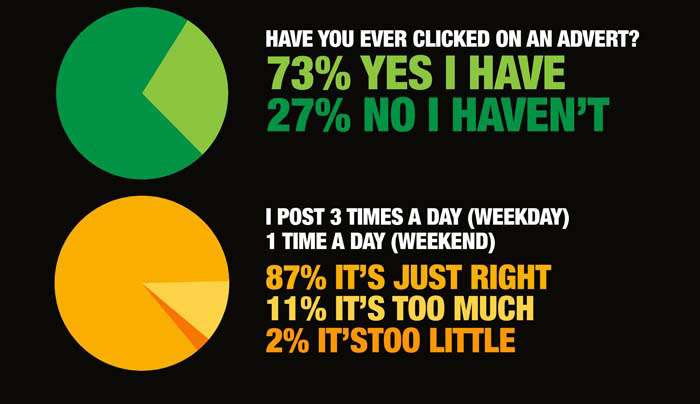 Another huge and pleasant surprise was that 73% of you had clicked on an advert on the site. Whilst some of you commented that there was too many or you didn’t like seeing adverts on the site (I’m sorry but adverts and sponsors are what keeps Rock n Roll Bride going and enables me to do this full time so that ain’t gonna change!) a massive 25% of you had actually booked someone they’d see featured or advertised on the site. That’s fantastic news for me (because it means you like the people I feature) and great news for my sponsors (because it means they get to book fabulous, alternative clients!)

I hope you’ve enjoyed this little insight into the readers survey process. If you haven’t seen it yet, I also worte a User’s Guide to help answer some of your questions I saw coming up and over and over in your comments.

Any thoughts on the overall results?