As photographers, Emmy & Aaron are more comfortable being behind the camera then in front, but for their one year anniversary (this week!) they decided they deserved some gorgeous photographs of their own!

Emmy told me the whole story:
When we took a little anniversary trip to a cabin on Cowichan Lake (Vancouver Island BC Canada) I pulled my dress, by Demetrios, out of the closet and took it with us.  We had a great little cabin on the beach and there were some other perfectly decayed old buildings on the property including this great lime green shed.  The owner expressed some concern that we were making photos in front of “the biggest eyesore on the property”.  I think that old shed is perfect!.  We met over a conversation about our shared love of photography.  Pretty soon we also loved each other and now we love making photographs together.  We can’t believe how lucky we are that we found each other and that we both have the same passion.  I don’t let him shoot me that often – I like being behind the camera as much as he does – but putting that dress on tends to let you become somebody else for a while.  Doesn’t hurt that its my hot hubby behind the camera!  Everyone should do this on their anniversary – let those dresses out of the closet girls you look fabulous in them and they want to be seen!  You don’t have to be a photographer just head out and have some fun!  I LOVE my dress and it was soooo much fun wearing it again!! 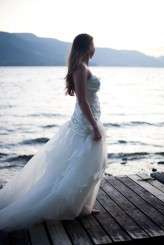