I’ve been told a few times that I’m too nice about everything and everyone on Rock n Roll Bride…now, considering I’m not such a heavenly creature in real life  that may be true.  However my argument is, why would I want to put someones wedding up here and slate it? That’s just mean and that not what the Rock n Roll Bride is about.  I’m all about celebrating uniqueness and diversity in weddings!

However, I just discovered Tacky Weddings (via Wedding Skulls) and omg this girl is doing all the bitching for everyone…and I love it!
I personally would never want to slag off someones wedding – I’d just avoid it if I didn’t like it, but you should defiantly go check out this site, either for the hilarity or maybe even for some inspiration (seriously the Gothic and the Hello Kitty weddings are awesome! – I’ve featured one of those Hello Kitty weddings before!) 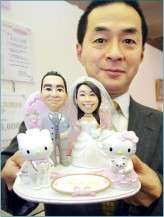 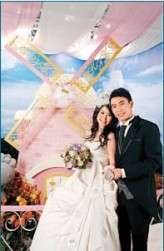 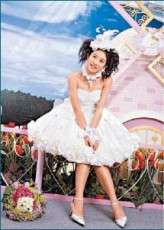 Credit: {1} KBO  No photo credit is specified on Tacky Weddings, however if you know the proper credit for any of the uncredited photographs here please let me know and I will add it.

When I saw Courtney and Cori's wedding for the first time I let out a little squeak of approval. Not only did these guys have a carnival themed wedding at a theme park but the bride used Hello Kitty (my favourite!) throughout her amazing outfit! Her shoes, nails and bouquet (!!) all had Hello Kitty on them. Is this the cutest thing ever or what?

Eric and Kat met in college. They now both work in the video games industry and have a mutual appreciation of all things Japanese - anime and robots in particular! "We share a love of Japanese culture", explained Kat. "We even went to Japan for our honeymoon. We wanted to somehow incorporate our interests and playful personalities into our wedding, but not alienate our guests, as we had a lot of family members attending."

Being a fashion designer in Brasil, Fernanda and made her own wedding dress/ She also hand stitched the one's her bridesmaid's wore too. Her work is inspired by Japanese culture so that, and her architect husband's love of clean lines, influenced the theme of the wedding.

Adam & Klara had two weddings, the first in Osaka, Japan and the second in Brighton, UK. The Japanese ceremony was held in Kitahama and afterwards the couple and their select few guests headed to Tables in Shinsaibashi, Osaka for tea and cake! When back in the UK, the ceremony took place at Brighton register office and they recreated the tea & cake reception idea with a simple gathering at Metrodeco, a 1930s themed cafe that specialises in high tea.