This Bride is just so fantastic looking..I love her necklace..in fact I want her necklace.  It’s getting late and I’m pretty tired so I don’t really have much else to say so just enjoy the photographs! 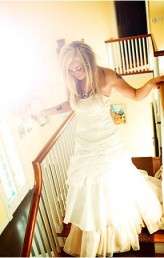 Credit: Mandy and Me