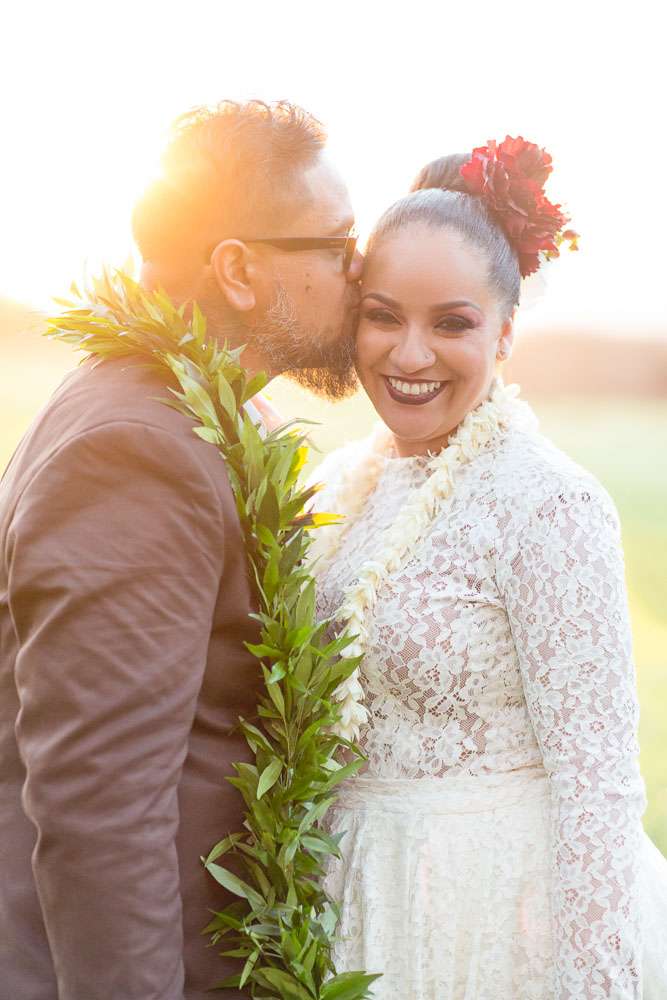 Jessica and Kanoa’s Hawaiian wedding took place on Maui. Their ceremony was conducted in both Hawaiian and English by the groom’s cousin. The bride was inspired by lots of vintage elements. 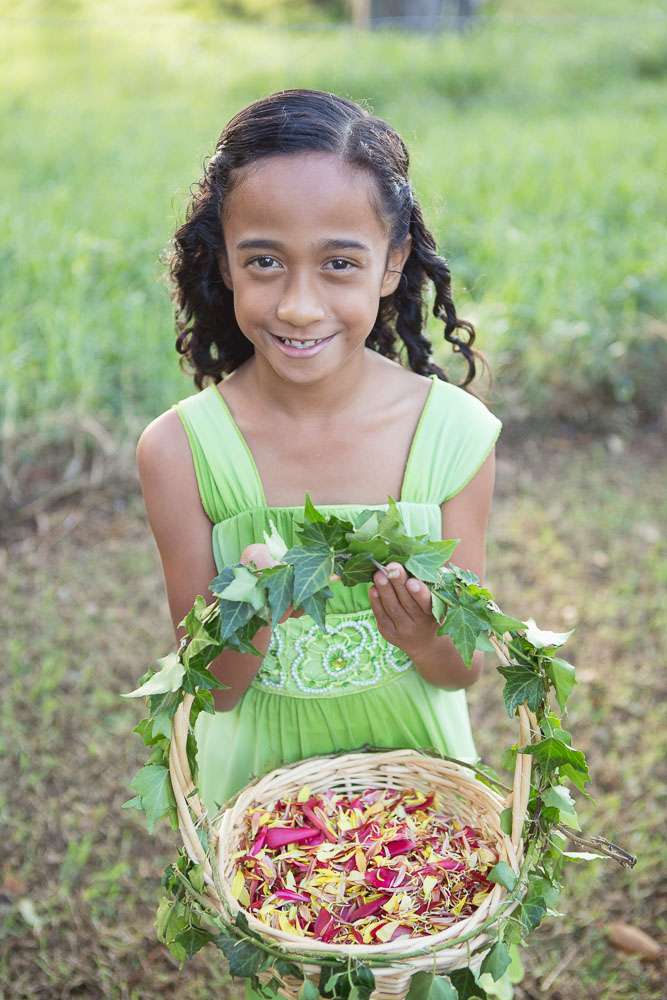 “I’ve always felt like I was born in the wrong era”, she said. “I would’ve loved to be the age I am now in the mid 60s/early 70s. I tried to incorporate that vibe when designing my wedding dress. My favourite movie is The Virgin Suicides; I love the modest yet gloriously romantic dresses in that film. I also promised my mom that I would cover all of my tattoos for our ceremony, hence the higher neckline and long sleeves (which I absolutely adore). As far as the other details of the wedding theme, Kanoa pretty much gave me free reign. Autumn is my favourite season, so I tried to stick with the vintage theme and incorporated dark reds and rich fall colours. The dinosaurs just sorta happened on their own!” 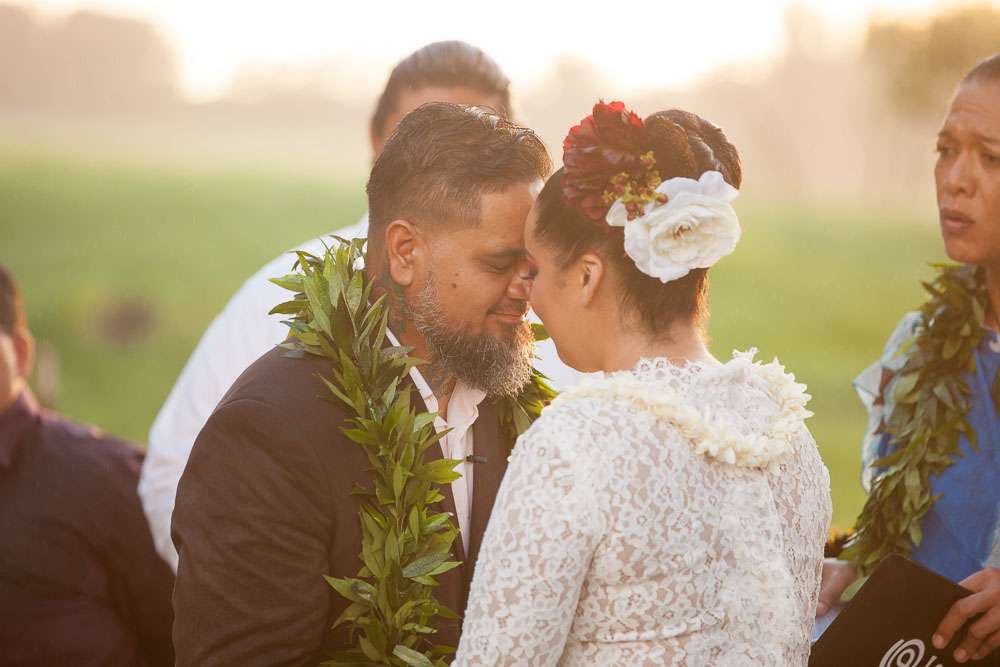 The wedding was held at Ka Hale Olinda in Makawao. “Being in the entertainment business, Kanoa and I chose the venue because it overlooked Rainbow Bridge, one of the last places Jimi Hendrix performed at in the 70s”, she continued. “Our ceremony was very personal for us, as our officiant, Pulama, is Kanoa’s cousin and we’ve spent a great deal of time with her. She also helped me write out and learn how to pronounce a section of my vows in Hawaiian as a surprise to Kanoa. I was so nervous about that! I didn’t want to mispronounce anything or offend Kanoa’s family by saying the wrong word by accident! Kanoa and I gave each other leis (a Hawaiian tradition that sometimes replaces rings), which are now dried and hanging in our bedroom. We also did ‘honi’, our foreheads press together and we inhale each other’s exhale. This is also a Hawaiian tradition that bonds us together by sharing ‘ha’ (Hawaiian for ‘breath’, the source of life.) 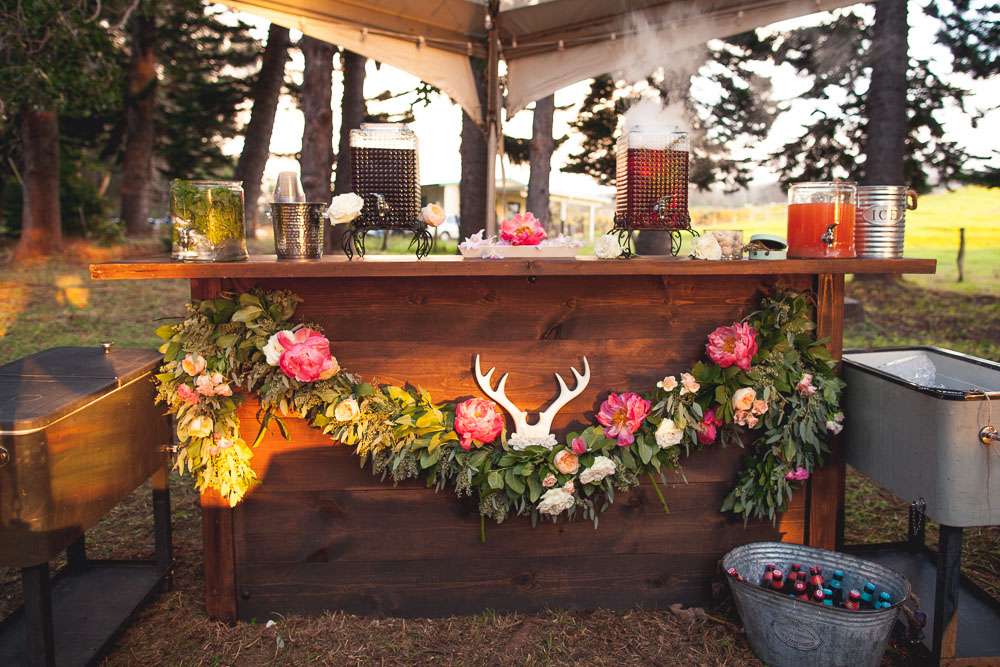 The weather was a bit temperamental, it rained but they also got a glorious rainbow during the vows! “I actually LOOOOOVE gloomy, rainy days”, said Jessica. “During our whole engagement I kept saying that I hoped it would be gloomy on our wedding day. The morning of our wedding, it was pouring rain at our venue. Like, flash flood conditions. There was mud EVERYWHERE (thank goodness for fantastic dry cleaners!). Thankfully, it mostly cleared up well before our ceremony, though we did have a few light showers during our ceremony (which I loved).” 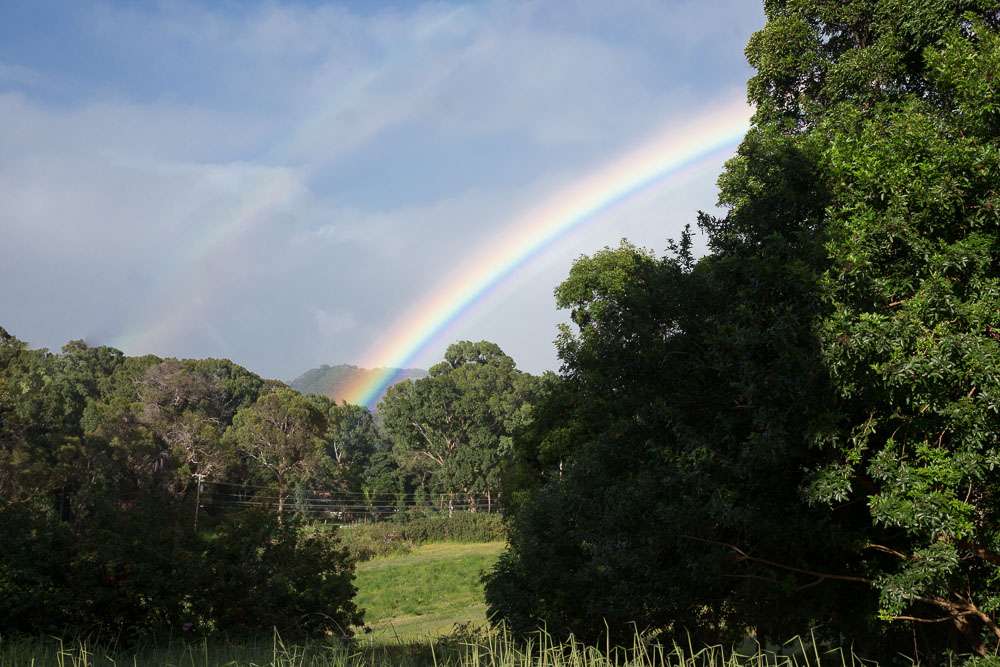 The DIY projects included the centrepieces and favours. “All of our centrepieces were wax-coated autumn leaves, twigs and both fresh and dried flowers. The mason jars were a last minute change. They were supposed to be displayed in real pumpkins however we bought them two weeks before the wedding and they didn’t last. I waxed them every day, gave them bleach baths every two days; they were basically my little pumpkin babies. But, with the humidity here on Maui, they didn’t make it. The mason jars were a great save, though.” 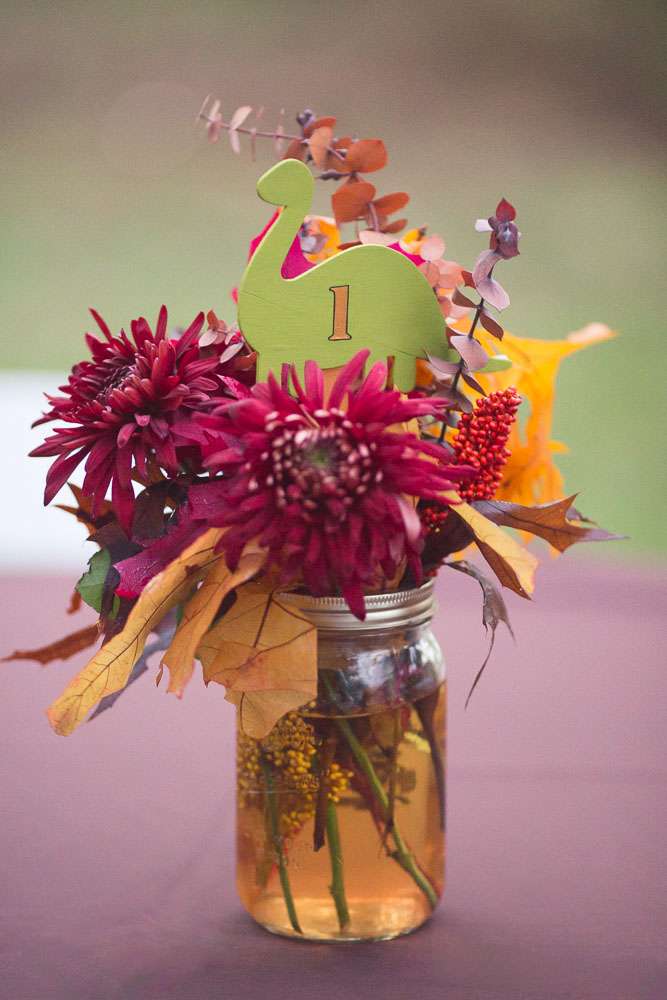 “The place names and favours for our guests were candles that my mom, sisters and I made. Being a bartender, I have unlimited access to empty liquor bottles that just get thrown out at the end of the night. I learned how to score and cut the bottles and we used them as candle holders. Our favours were loose-leaf tea bags inside a little burlap bag with a personalised stamp of our faces on it.” 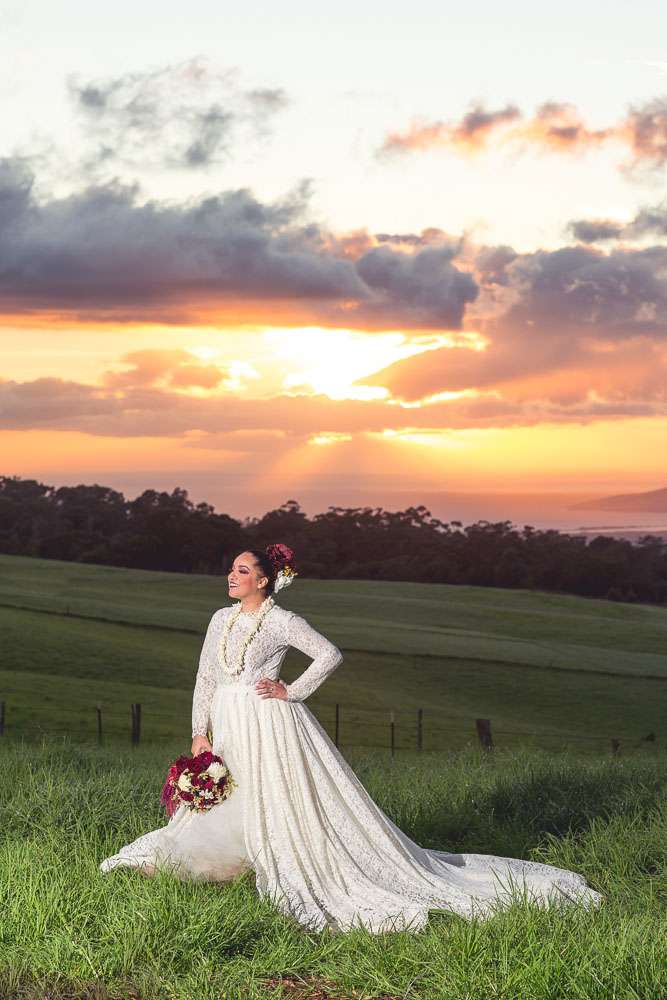 “The best part of the wedding was planning all the little details”, the bride concluded. “I also loved having all our family and friends there to celebrate our love. The only thing I would change is that I wish I ate more truffle macaroni and cheese for dinner. I only got two bites in between the drinks, dancing, hugs, kisses and pictures!” 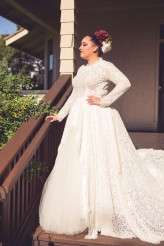 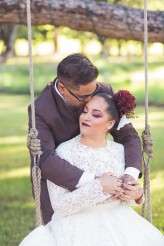 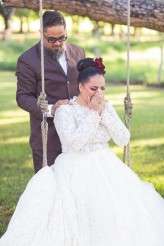 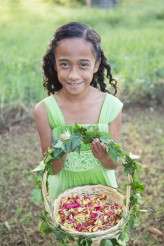 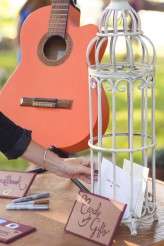 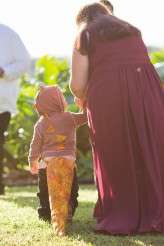 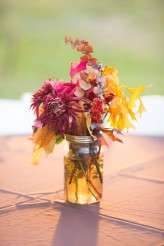 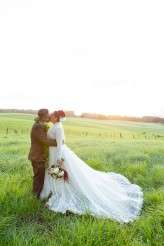 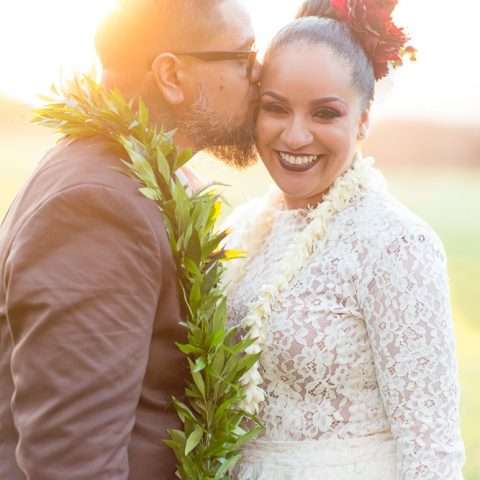 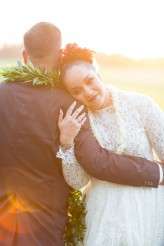 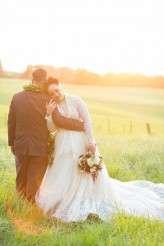 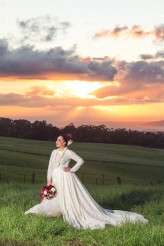 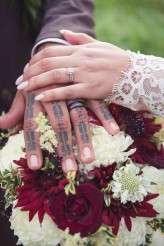 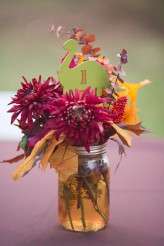