I think this wedding is quite different to the style I usually favour, but I still love it! The hat reminds me of going to English weddings where all the ladies wear big adornments on their heads.

Photographer Courtney, described this day to me:
Megan and Norm were married on May 30, 2009 at Willow Park in Louisville, Ky. That had no attendants, except for their “ring dog” Misha.

Megan didn’t opt for traditional hand-held bouquet instead chose to
compliment her outfit with a huge, gorgeous hat.
The Bride and Groom opted to accent their wedding with fleur-de-lis, a symbol of Louisville. While the guests noshed away on vegetarian friendly fare, trashcans were adorned with signs informing everyone that all the serving ware was fully biodegradable.

The music before the ceremony and during the ceremony was provided by
local musician friends, and the guests danced during the reception to the
musical stylings of a ragtime band, Rascals of Ragtyme. 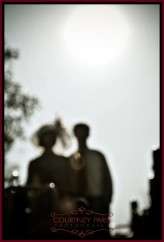