About 30 seconds ago these popped up on Angie & Matt Sloan’s Twitter(s) and I am just dying to be the first blog to share them with you all. How gorgeous is Mele? This shoot is absolutely glorious.

OK calm down now Kat, you may well have got a little bit over-excited there. 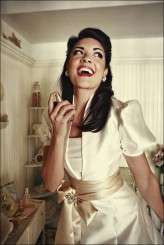