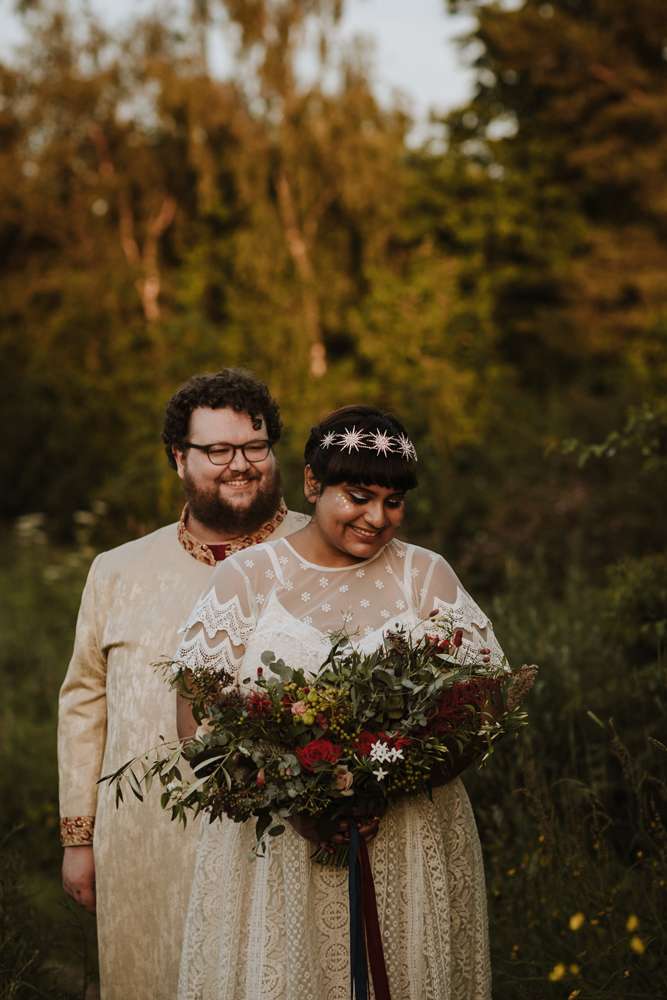 Diversity is most definitely a hot topic right now, we have our socio-political climate to thank for that. Rock n Roll Bride has always been about accepting everyone that feels marginalised – regardless of whether that’s because you identify as LGBTQ, you’re from a minority group, you’re plus sized, disabled or just a little bit goth! Basically, if you don’t see yourself being represented by the mainstream wedding media, at Rock n Roll Bride we want to say pull up a chair and join us.

But we don’t always get it right. There was a VERY heated discussion on cultural appropriation in regards to weddings in our private Facebook group recently. The reason I think it can cause such uproar is because often these things fall on a sliding scale – what offends one person may not offend another and the cultural history of something in America, for example, might not have the same significance to people that grew up in the UK.

For me personally it is a very difficult thing to discuss publicly. I will be 100% transparent with you here and admit that it actually makes me extremely uncomfortable. I don’t want to get it wrong and I don’t want to cause even more offence. However, I do think it’s something that needs to be addressed, least of all so we can all become better educated about it in a non-judgemental space. I don’t know all the answers, no-one does, but I hope that by opening up this discussion we can learn something and become a more actively inclusive group.

After a recent (very lengthy!) discussion with my friend Nova of Nu Bride, I’ve invited her to write this article. Nova is a diversity advocate and does incredible work on raising awareness around race and culture. She is a wealth of knowledge when it comes to this stuff and I’m honoured to publish this piece for her.

Over to you Nova! 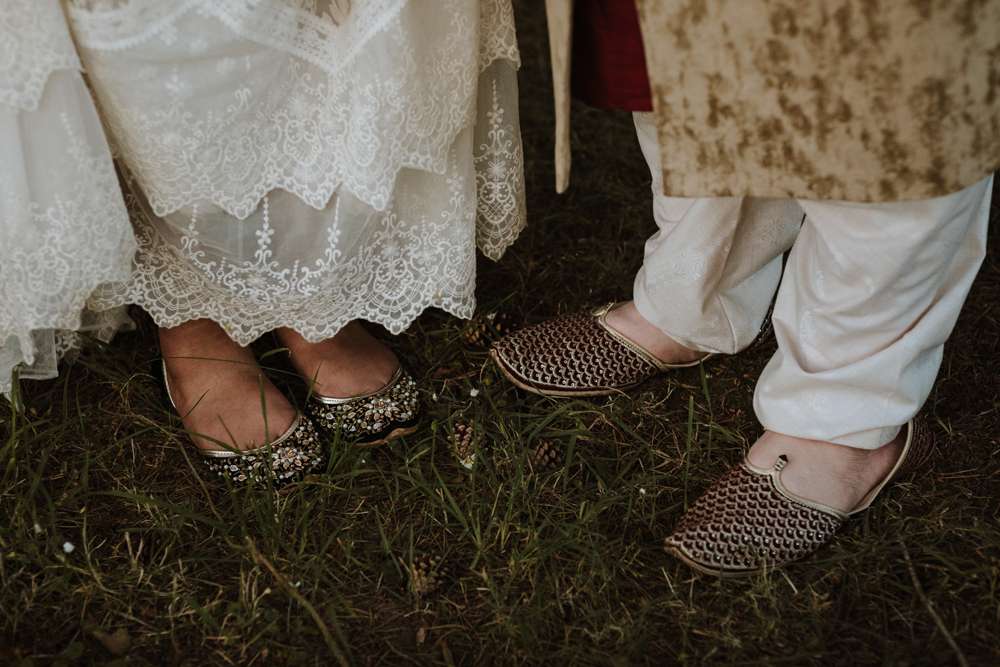 I often get asked how to fuse cultures together without them looking like, ‘mish-mash’. How to respectfully celebrate cultures that might not be your own without appropriating.

Nu Bride is all about celebrating difference and encouraging you to have a wedding that acknowledges your western side and is also representative of who you both are in a way that at times honours more than one culture, something more and more couples are keen to do. So, with a growing online cancelling culture, how do you do that without culturally appropriating?

What exactly is cultural appropriation?

In black and white (no pun-intended): Cultural appropriation is ‘the unacknowledged or inappropriate adoption of the customs, practices, ideas, etc. of one people or society by members of another and typically more dominant people or society.’

The key component to cultural appropriation is remembering that it only becomes problematic when a dominant group of people (for example, white people) take on the culture of a minority group of people (for example Native American Indians) who have historically been marginalised / oppressed in some way and who still face discrimination pertaining to their culture. It could be anything from clothing, food, sacred religious artefacts or hairstyles like braids or dreadlocks, for example. It is generally considered offensive when it is done in a way that stereotypes, exploits for commercial gain, or is taken without consent.

Here some examples to bite your teeth into:

Beyoncé Slammed For Cultural Appropriation After Performing At Indian Wedding

Gucci Criticised For Cultural Appropriation On A Global Scale

The jury is out for if this wedding example is appropriation or not, I will let you decide after you have digested this article in full. 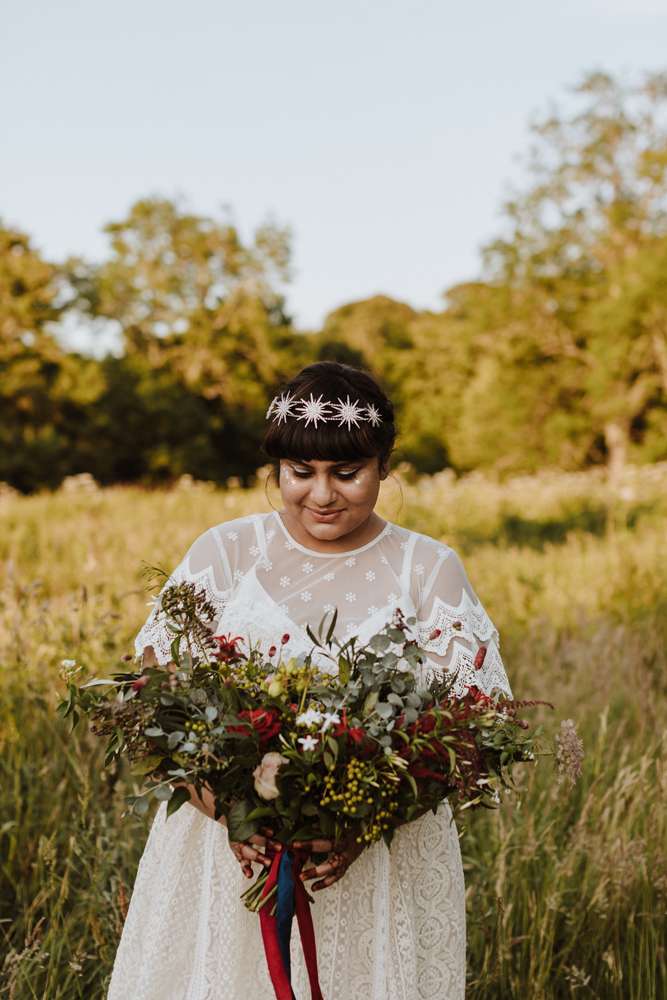 Isn’t cultural appropriation just an excuse for people to be over-sensitive?

Well, not if it is true appropriation no (and yes, there can be a fine line, context is everything), and definitely not if the objection is coming from someone who actually belongs to the community that is being appropriated. It shouldn’t take away from our own experience to be sensitive and respectful of others cultural identity, particularly those who still face discrimination for simply being themselves. Being inspired by and showing appreciation is not the same as appropriating.

For example: South Asian traditional wear is popular in weddings. The colours, how regal it is, the decadence of the jewellery such as Maang Tikka and fabrics often inspire style choices and expression. A colleague of mine recently said that when she chooses to express her culture on a day-to-day basis, she is subjected to racist abuse for simply wearing a bindi (a symbol pertinent to both her Hindu faith and culture). Many people in Indian communities still face discrimination as a result of their race and for expressing their culture. In contrast, a person in a dominant group can wear a bindi without any connection to Hindu faith or South Asian heritage and doesn’t face the same discrimination, nor do they have racist slurs hurled at them. Instead, they are seen as cool or trendy. That’s a set of examples of how and why perhaps the most innocent of appropriation can cause outrage and harm.

Weddings are the perfect opportunity to explore traditions from around the world that have meaning to you and to express your own culture and personal tastes. But there is a fine line between appreciation and appropriation, especially when it comes to clothing and accessories. This is where the shit can often hit the fan. Your wedding is ‘your day’, but If you are choosing to share your wedding over on the internet, be prepared to be held accountable. 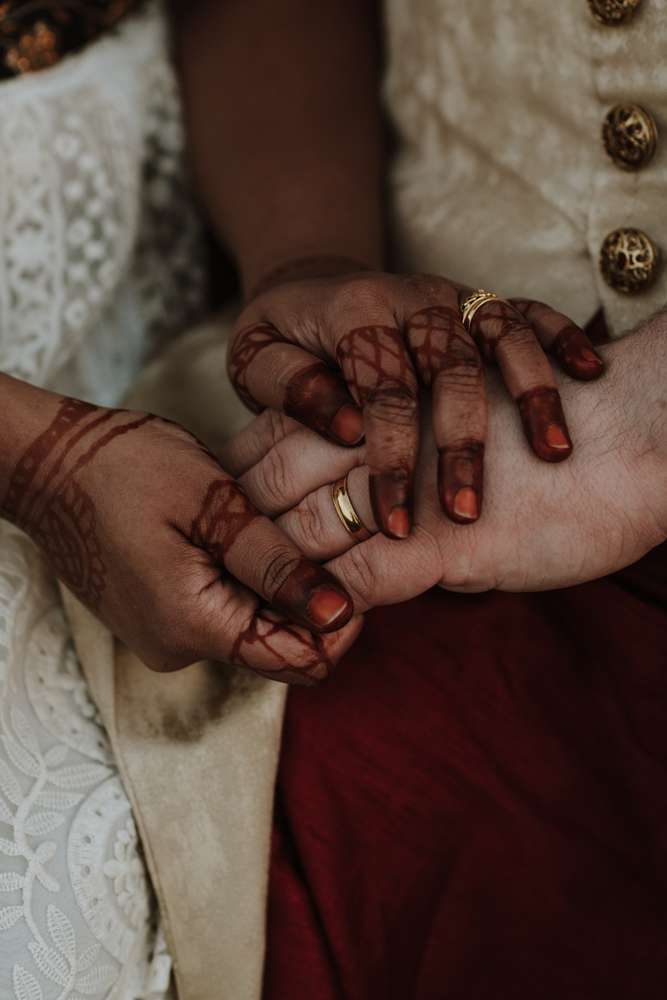 So how can you incorporate the things you love without appropriating?

Understand the bigger picture. No-one is telling you what you can or can’t do, that is ultimately your choice, but if you don’t understand what appropriation is or why it’s so offensive (and you want to so you can avoid causing harm) spend some time doing some research. No-one expects you to know about every single origin of every single culture on earth, but they may expect you to be more aware by educating yourself.

We can be inspired by and respectfully borrow from other cultures without appropriating by simply being more aware.

In the words of Aretha, just have respect. Rage from cultural appropriation often comes when people of the community being appropriated feel they are being exploited or misrepresented.

It is not a bad thing to be inspired or appreciative of another culture, in fact it should be encouraged. Diversity adds a richness to all of our lives. Just think about how much we regularly experience culture through music or food, BUT there is a fine line between appreciation and appropriation. Let’s take Jamie Olivers’ Jamaican Jerk Rice incident for example. At face value it seems totally blown out of proportion. “Jerk” is a form of marination thought to have been originally developed by African slaves in Jamaica as way to preserve their meat. However if he was being mindful of its origins and wasn’t simply using it for mainstream commercial gain (and considered giving back to the community with which it originated) maybe it wouldn’t have blown up like it did.

Consult, research and understand the traditions, the clothing and any sacred meaning behind the item or culture you are inspired by. 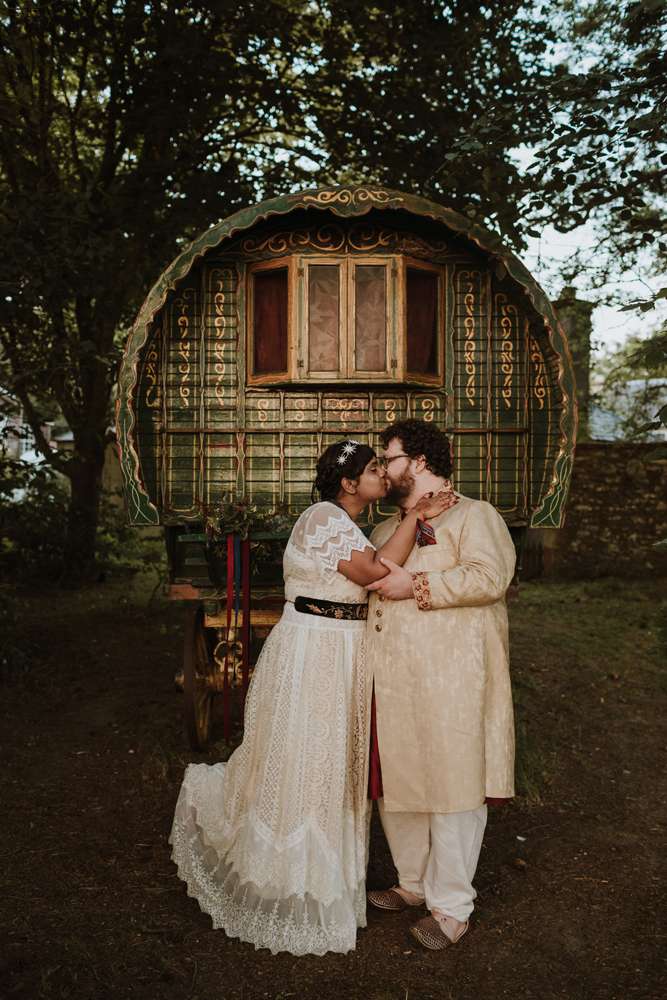 The largest forms of offence caused by appropriation often occur with religious items. My genuine advice? Don’t mess with this. If you or your partner don’t belong to the religion, leave it alone. If you are inspired by another’s culture and you want to incorporate aspects within your styling, think about authentic music, food, entertainment or decor touches instead. Do not use sacred religious items just because you like the way they look, or to express a theme if it is not part of your culture

It is the same with any culture that has experienced genocide by westerners. There are so many other ways you can choose to express your personal taste and personalities.

THE POWER OF MONEY

You have the power of choice. If you wish to show appreciation or if you are fusing more than one culture together, exercise your power of choice and actively choose where to spend your money.

If you are having a multicultural celebration with traditional wear that you would like your guests to embody as part of the union of your two cultures together, hire or buy from suppliers and vendors from the community with which you are celebrating the culture from. Buy cloth from artisans and use your wedding information card (or website) to recommend where to buy items from. Also use them to educate your guests about the meaning behind the cloth, colour, symbol or outfit for example.

The morale of the story? Be mindful, educate yourself, be respectful, give back or avoid! Happy planning! 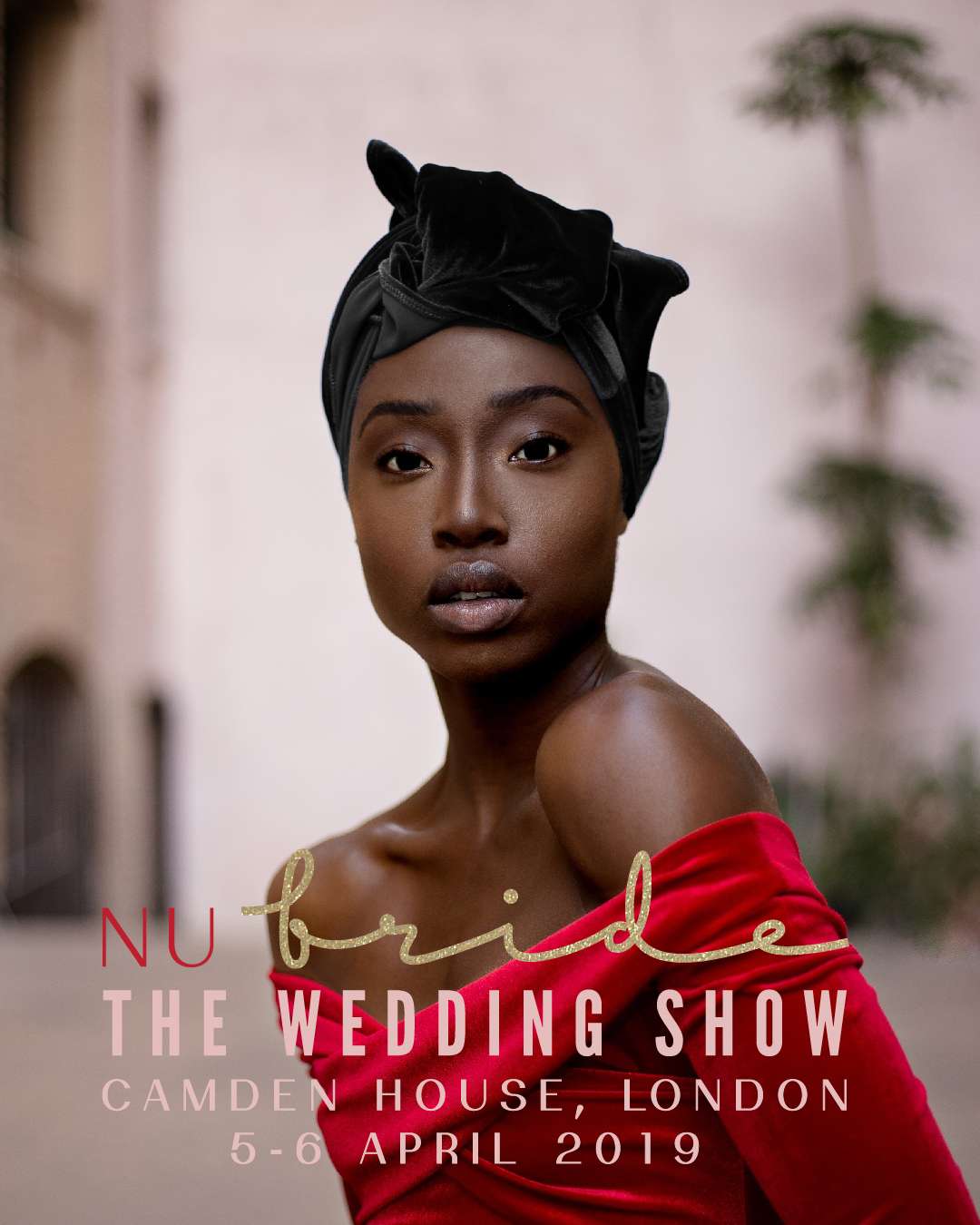 Nova Reid founded Nu Bride in January 2012 to educate and encourage a more visually inclusive wedding industry. If you would like to find out more about planning a modern and equal marriage and fusing cultures together, check out Nu Bride The Wedding Show, the UK’s first wedding show dedicated to diversity. Taking place on the 5th and 6th of April at Camden House, London, Rock n Roll Bride readers can get 30% off a limited amount of advanced tickets by using the discount code NBTWS001. Subject to availability until the 28th February, once they’re gone, they’re gone!