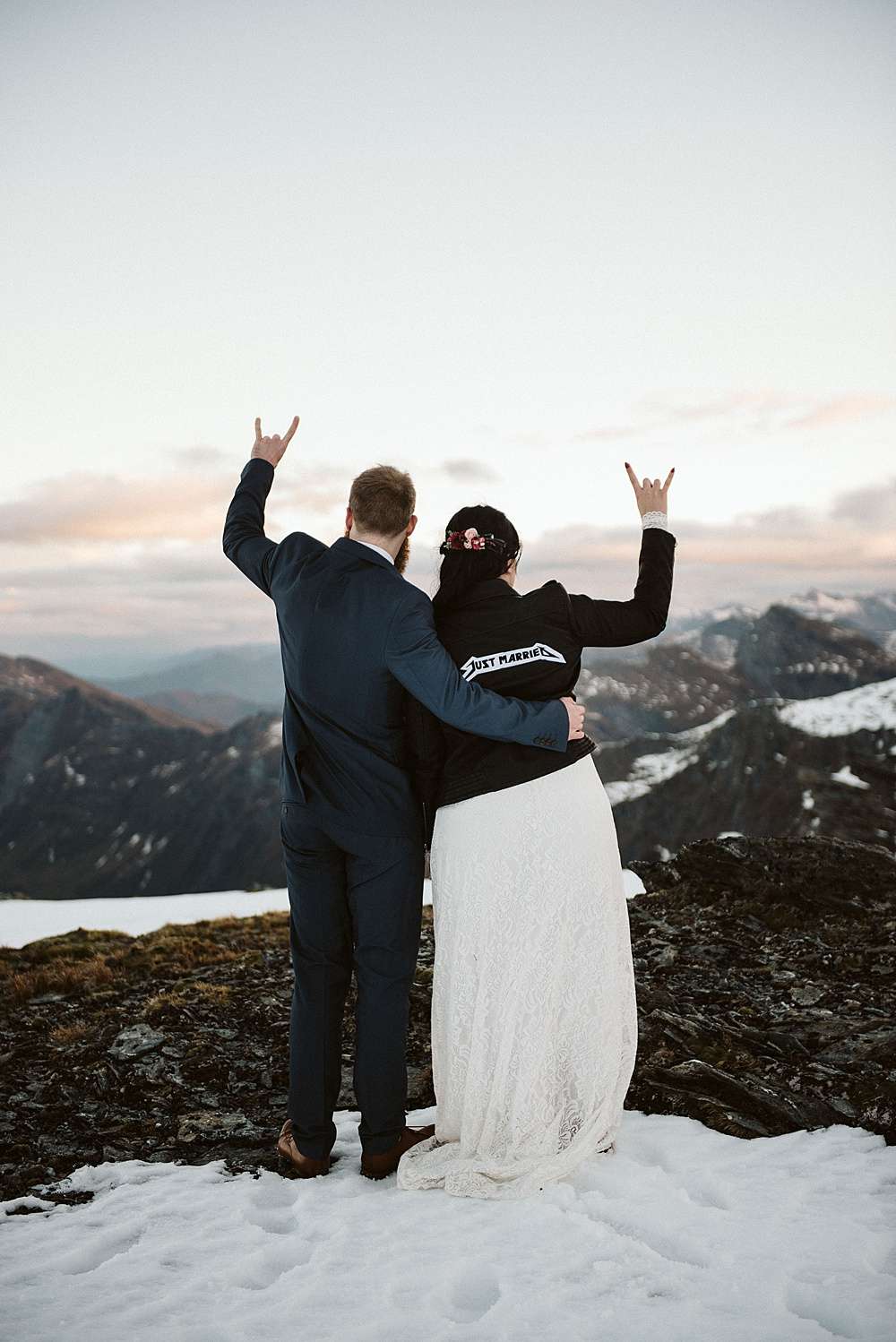 If this elopement had a soundtrack, it’d be a very emotional rendition of You Take My Breath Away mixed with the Game of Thrones theme tune. Jess and Sam’s beautiful wedding is a genuine breath-taker, as they got married at Glendhu Bay Lookout, which looks over the Mount Aspiring National Park. Fittingly, I am now aspiring to get to this national park, stat. Then, they took a helicopter ride to Fog Peak and, well, the photos speak for themselves. 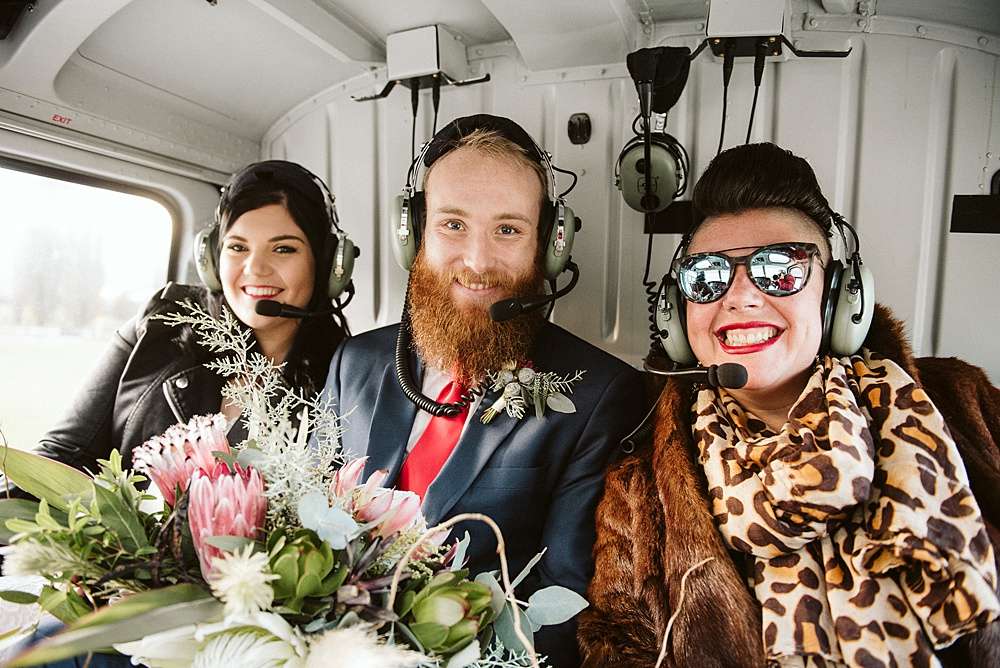 “We’ve never been fans of large, traditional style weddings so we’ve always wanted to do something a little different from the norm,” Jess says. “We also fell in love with New Zealand and the beautiful landscapes when we did a road trip around the country in 2017. After considering different types of weddings to have at home in Australia with friends and family, we decided that it wasn’t ‘us’, and that we had to do what made us happy. We both wholeheartedly agreed that we wanted to have an intimate wedding and get married amongst the stunning scenery in NZ!” 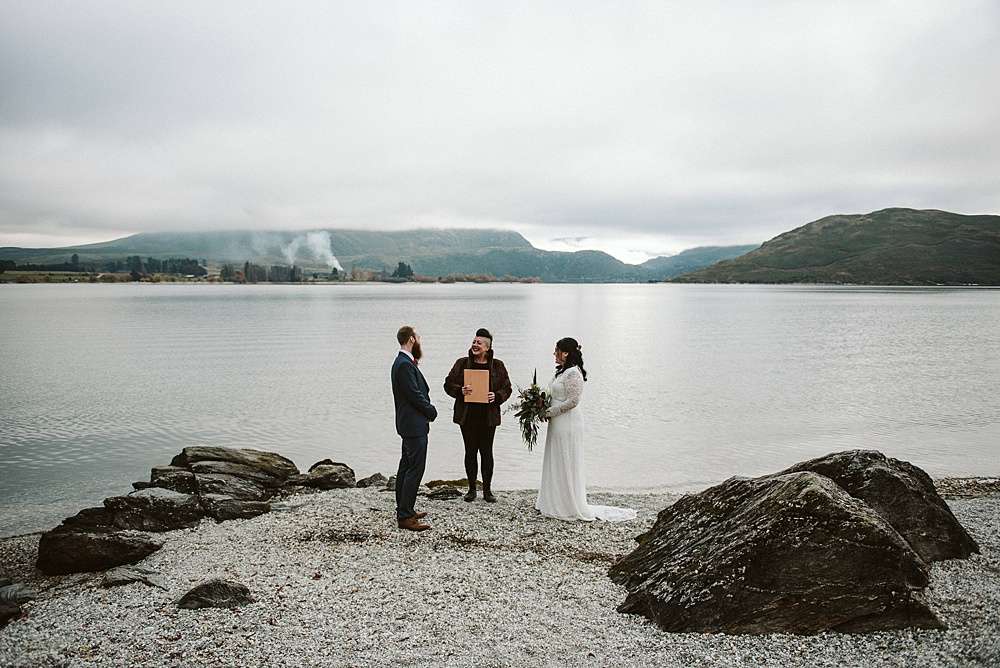 “As you can see from the photos, we couldn’t have a serious moment even when we tried,” Jess continues. “We laughed a lot and couldn’t wipe the smiles off our faces.  It took some getting used to walking around in the thick snow of Fog Peak in a long dress and flats, but I had Sam there to help me and laugh at me whenever I fell over.” 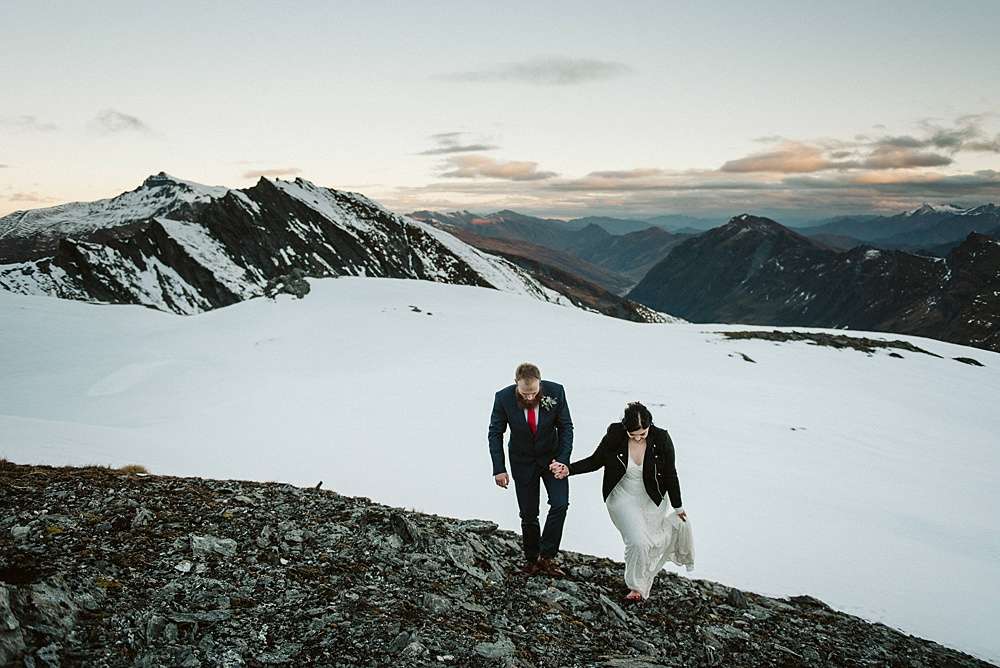 The couple met when both working at a liquor store in 2012, and hit it off when they discovered they both shared a love of heavy metal and pop culture. “We achieved ultimate geek level as our vows included quotes from Game of Thrones and Lord of the Rings, and our wonderful celebrant Emily Cane included a poem called Superhero which described the love we have for each other perfectly. I also pinned a custom made ‘Just Married x Metallica’ back patch to my Rivers leather jacket.” 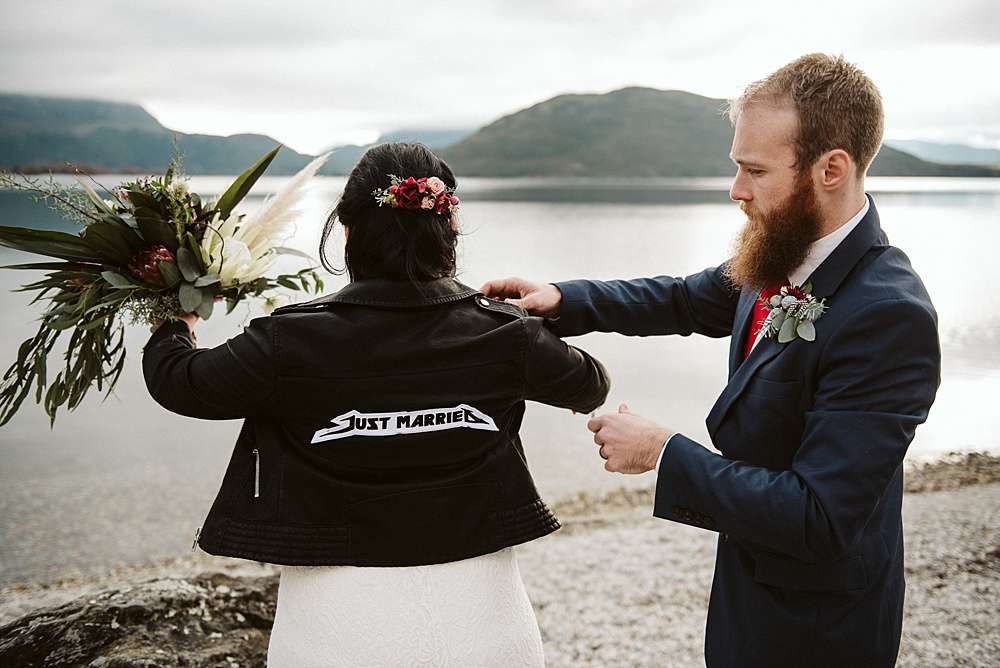 They saved a lot of money by eloping, even though that wasn’t the reason they did so. “My dress was brand new, handmade and cost less than $250 (AUD) off Etsy. Sam’s entire suit cost $100 (AUD) from Target.” 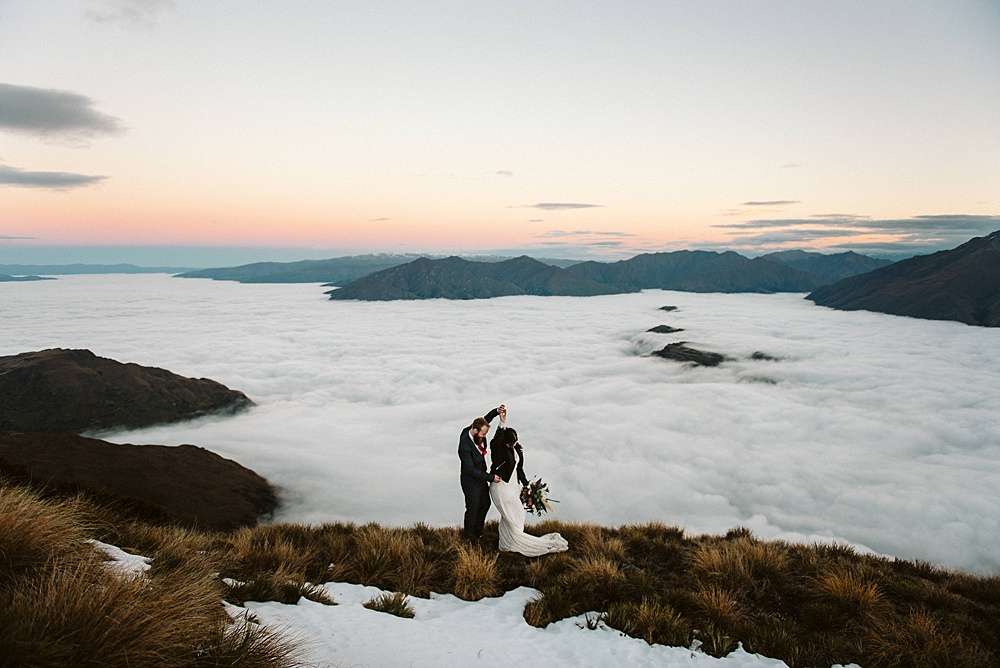 If anyone’s thinking of eloping, Jess advises to do it with bells on. “I think what sets us apart is that we focused on our happiness and got married the way we really wanted to. We decided that having a traditional wedding where you become fixated on pleasing other people rather than spending the intimate time together wasn’t for us. The day is about the two of you, and having that special, intimate time together is something we truly cherished. Have fun, take in every moment, and don’t stress!” 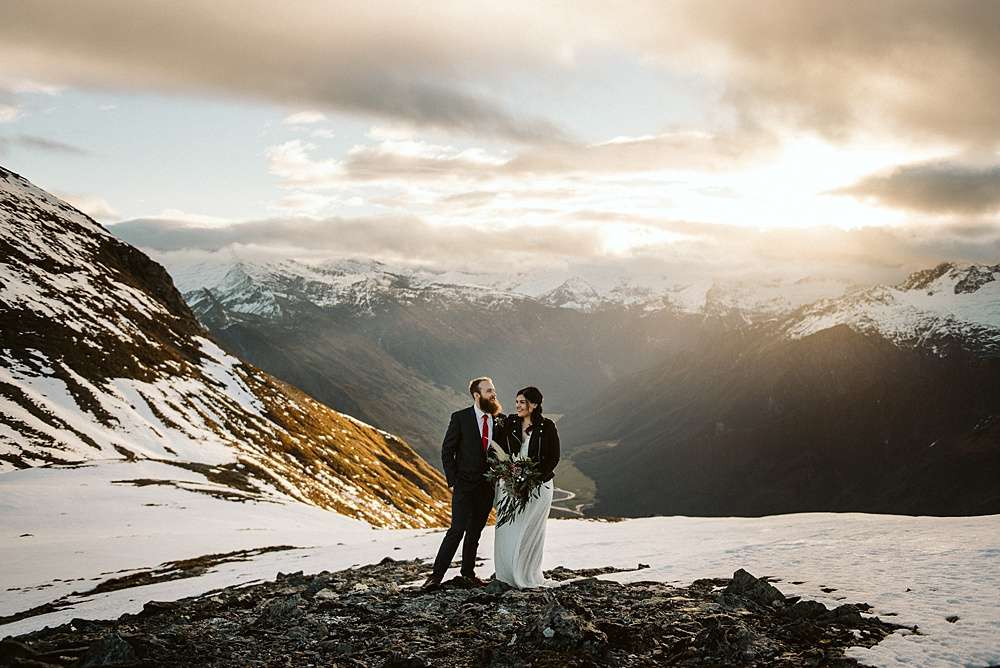 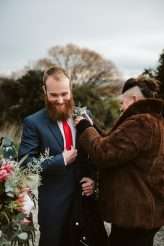 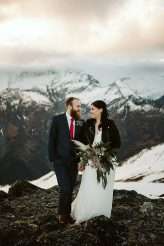 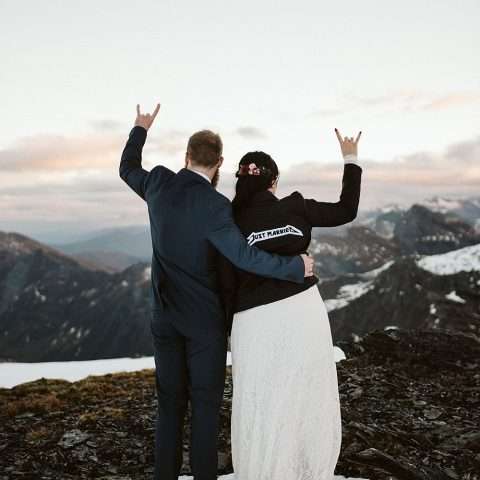 Holy forking shirtballs. Yep, I think the only explanation to these stunning, STUNNING images is that Erin and Steve got married in actual heaven... Because WOW. In reality, the wedding was held in Queenstown, New Zealand but same, same right?

After living in Queenstown for many years, finding peace and serenity on the mountain tops after many a hike, and Ashleigh and Wian couldn’t think of anything more perfect than saying ‘I do’ on top of those same mountains.

Spring has very much sprung over here in the UK. And as the daffodils start to line streets and parkways, I usually forgo featuring any obviously winter weddings. After all, who want to be reminded of the cold and bleak mid-winter when it's so glorious outside?! Well Meghann & Nathan's wedding was different. They were married in the Colorado Mountains, where snow is a pretty regular feature. They also had a steampunk theme and only spent $2000 on the day, making it a wedding that I just knew you guys would flip out about. So, yet again, my self-imposed rules are being broken today. Oh well!

Masha and Lenya are prolific skiers and so wanted this mutual love to be reflected in their Israeli wedding. The day took place at Villa Dalia, in Moshav Ora on the outskirts of Jerusalem. There was free-flowing alcohol and sports references throughout.

Devin and Nina were married at the Solitude Mountain Ski Resort in Utah, in May. Her completely stunning dress was 'Josee' by Grace Loves Lace. "For our wedding day I wanted simple, and unique", she wrote. "We were exhausted of going to the same wedding over and over and wanted to do something a little different."

A Sunrise Family Hike with a Mountaintop Elopement Ceremony

Nakean and Amanda, who both have a children from previous relationships, met online and bonded immediately due to their mutual love of outdoor adventuring. Many of their early dates were doing something adventurous - from hiking to snowshoeing - so, when the decided to marry in August, having an outdoor adventure elopement was the prefect choice. They decided on an early morning hike, with their kids in tow, culminating with a mountaintop elopement as the sun rose.