Sarah and Sibley’s wedding was held at The Barn at South Milton. They planned a day to celebrate them, the joining of their families and do have a damn good time! Spending just £7000, they saved money by wearing high street clobber (Sarah’s incredible sequinned dress from JS Collections at House of Fraser and Sibley’s snappy suit from Moss Bros) having a DIY cake, picking wild flowers and making all their own paper goods and decorations. 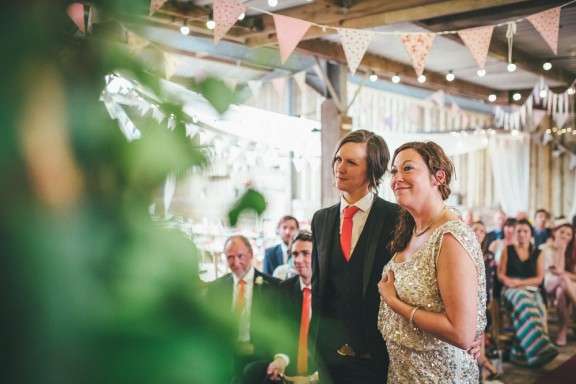 “Our theme was a rustic barn, country style wedding”, Sarah wrote. “I guess the difference from most traditional weddings was that we made most things ourselves with the help of one of our best friends. We also didn’t have any kids there. It meant there was no loud screaming through the ceremony or speeches, parents didn’t have a distraction and could let their hair down and enjoy themselves.” 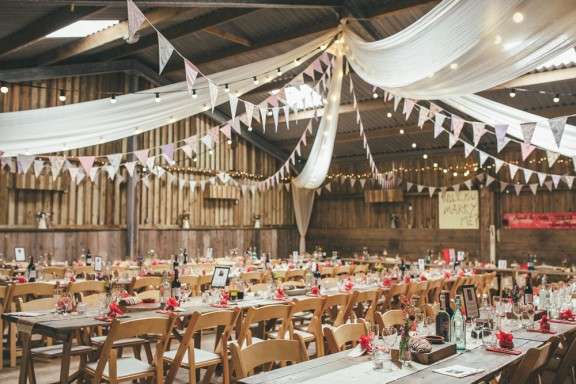 “We were incredibly relaxed and not bridezilla brides at all,” she continued. “We just wanted to have a massive celebration with our friends. I think a lot of people have always rooted for us as a couple. That, and us probably being the only gay couple a lot of people know, it was a big celebration for everyone. It was also incredibly special that gay marriage was legalised at the end of March and we were one of the first few couples to get married in the South Hams.” 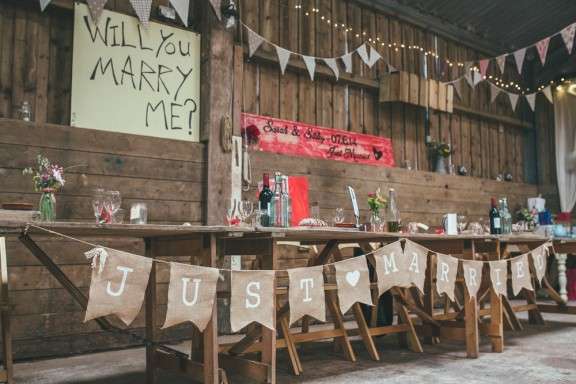 “All our invites, the table plans, table decorations, our order of the day, all our signs we made by  us. We made stencils and spray painted them onto old scaffolding boards. We also used old floorboards and treated, sanded and painted them in red and grey to use used them for our breadboards. Both the signs and boards came out really well and have since been used to decorate our garden!” 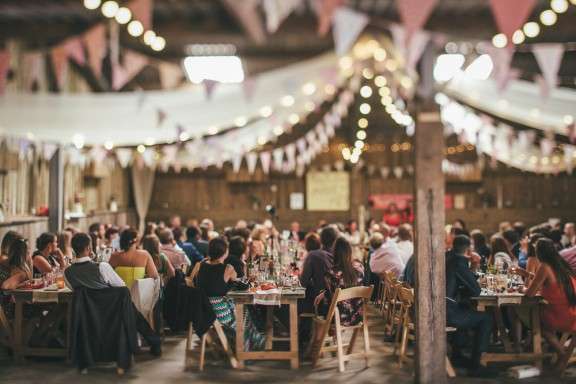 “The favourite part of the day for us both was the ceremony and speeches”, she said. “We had a personalised ceremony performed by a friend which made it more sincere and definitely more heartfelt than if it was a stranger doing it. We had speeches before the food and they were very long, funny and very entertaining.” 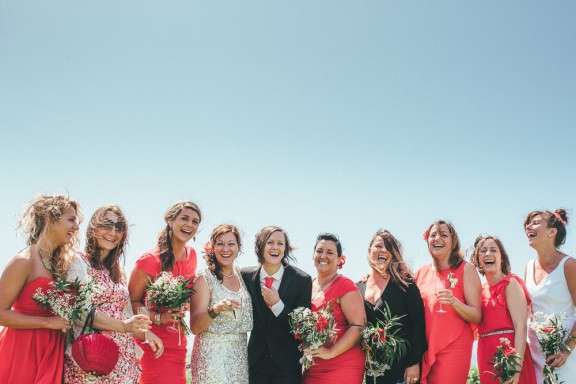 “Our biggest expense was the venue at £4000 but it was totally worth it! Paula and Paul, who own it, were on-hand all day and night, and busied and directed unnoticed the whole time. The venue price included a lot of things, like tables and chairs, heating, spring water on tap, the photo booth, table runners, jam jars and anything that was left over from previous weddings! They were so helpful and the nicest people, we couldn’t thank them enough. We also had the venue from Tuesday evening to Sunday afternoon AND camping was free onsite!” 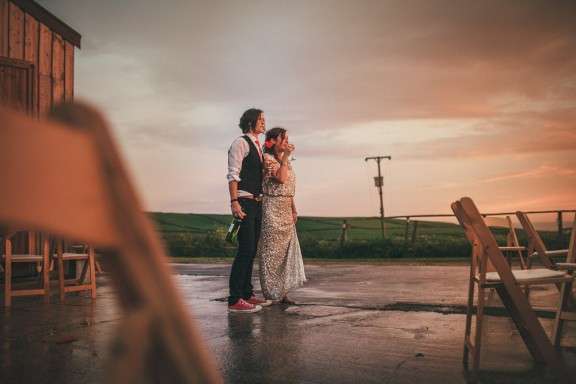 “Our advice to other couples would be to just enjoy it all”, she concluded, “the build up, preparation, the day itself. You can get to caught up in the little things and on the day none of it will matter. We also thought it to be really important to act like guests at our wedding! It was much more fun than being the centre of attention all the time! Another thing is to take time out to be with each other, Brett, our photographer, took us off for photographs for probably about an hour, and it was great to walk back to the buzz and think that all those people were there for us.” 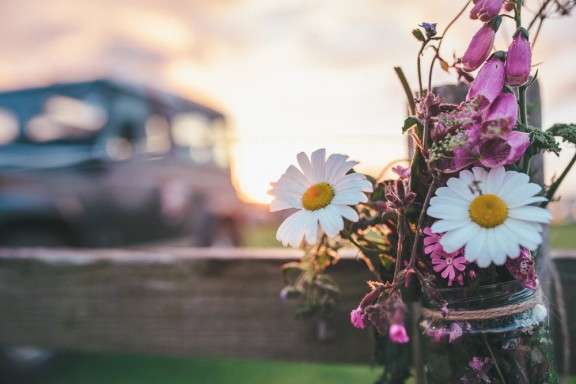 Shen and Eva's wedding was inspired by Shen's love of red hearts and how they've decorated their home. "After I purchased my dress (the red one), and as an extension of our home decor, we had lots of love hearts everywhere in the wedding", said Shen. "The day had a little bit of us all over it - from Marvel to Minions with some vintage cameras (as a nod to my work) and music thrown in. Everyone said to us how personal it all was with all the little touches,"

Cathie and Claire were hitched at Glenmore House. Their wedding was bright and full of fun! The pair both rocked amazing outfits, Claire in a red Candy Anthony dress and headpiece and Cathie in a corset from Fairy Gothmother and trousers by Vivienne Westwood. At their reception they had a popcorn cart, bunting, vintage suitcase for cards and vintage vases and jam jars for the flowers with tea lights.