2011 is looking like it’s going to shape up as the most exciting year for Rock n Roll Bride so far! Not only have I got top secret and super-bloomin’-exciting new projects that I’m already working on for the new year (watch this space!) but a few weeks ago I was emailed by a PR friend of mine asking if I’d like to be involved in the brand new Designer Vintage Bridal Show, which is happening in Birmingham, UK in February!

They asked if I’d like to attend as a special guest to come and meet…well…you lot – so I of course jumped at the chance! So, on February 19th and the 20th I will head up to Highbury Hall in Birmingham with my friend Annabel from Love my Dress to take part in the ‘Meet the Bloggers’ segment of the show.

Be sure to keep your eyes and ears peeled as I’ll be posting more about the show as I get more details, including letting you all know exactly how many of my awesome supplier friends are going to be there when they confirm…and from the whispers so far it’s going to be a totally awesome bunch of people! 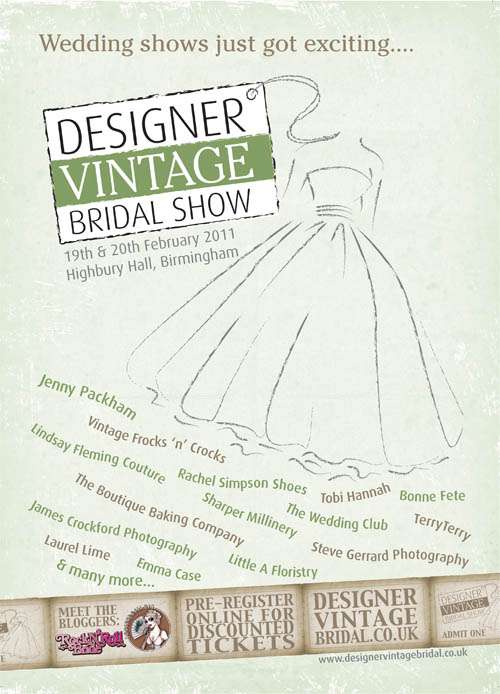 The Designer Vintage Wedding Show is a brand new bridal show, celebrating the creative, the incredible and the absolute hottest designers and suppliers of all things vintage, is making its debut in Birmingham next year.

With vintage influences making themselves very much at home in the fashion world, the Designer Vintage Bridal Show, organised by bridal shoe designer Rachel Simpson and Clare Guest, co-owner of The Wedding Club, a designer and vintage bridal boutique, will showcase exceptional talent within the bridal industry.

Highbury Hall, an impressive Victorian house, plays host to the 2-day event where guests can wander through an explosion of eras, each area dedicated to a decade of style, oozing with treasures and must-haves for the vintage loving bride-to-be.

From designer gowns to boudoir style underwear, from head to toe, from brand new to vintage originals, from fashion shows to afternoon tea and all nicely wrapped up with entertainment and a chance to meet and talk to the experts.

“Vintage fashion keeps on making a comeback and never more so than in the bridal market,” says Rachel. “With so much creative talent coming from the heart of the country, it made perfect sense to pull them all together under one roof, to create the Midlands’ first designer vintage bridal show.

Clare added, “More and more frequently we are asked by brides, where they can find ideas for a truly vintage styled wedding.”

I look forward to seeing loads of you there!