Natasha and Shaun’s wedding had a vintage 60s and 70s theme to reflect their love of retro fashion, music and style. They’re both obsessed with The Beatles so that had a big influence too. 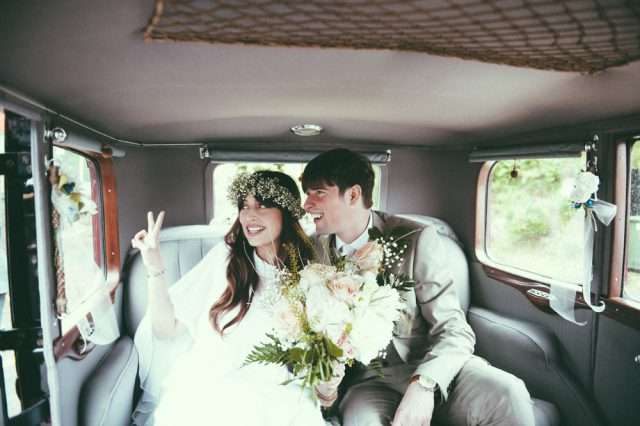 They decided to marry in June as they wanted a summer wedding. “We also wanted to go on our honeymoon to Glastonbury straight away!” Natasha laughed. It took us just over a year to plan the wedding but right from the start we knew exactly what we wanted. We have a lot in common – more than just our love of The Beatles! We also love art, fashion, vintage, festival and films so we brought all those things into the theme of the day too. When it came to styling the day we both agreed we wanted a small, yet very relaxed wedding. We also wanted the day to echo weddings from the 60s and 70s, with a vintage feel. Our main colours were gold, taupe and mint.” 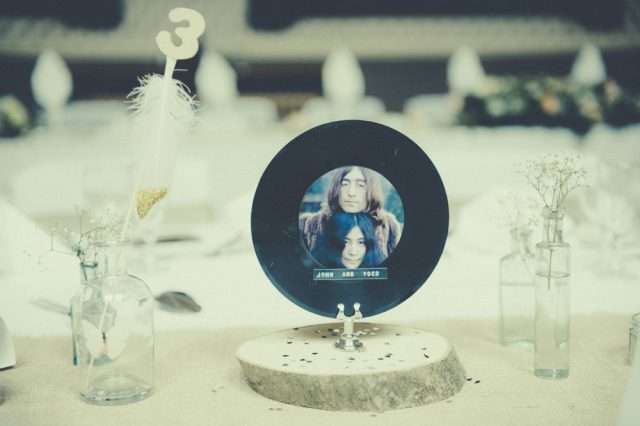 Natasha wore a 70s vintage dress from Glory Days in Yorkshire. I researched Glory Days online and instantly fell in love with the dresses. The shop was like stepping into a vintage haven. It had every wedding dress imaginable from every era, I was really spoilt for choice. Originally I thought I wanted a short, 60s style dress like Yoko Ono’s wedding dress but with a short veil. However I stayed open minded and tried on lots of different styles. The one dress I initially had my eye on didn’t suit me in the end. Eventually I found ‘the one’, a stunning silk chiffon bat wing sleeved gown from the 1970s. It was simple and fuss-free and was so comfortable!” 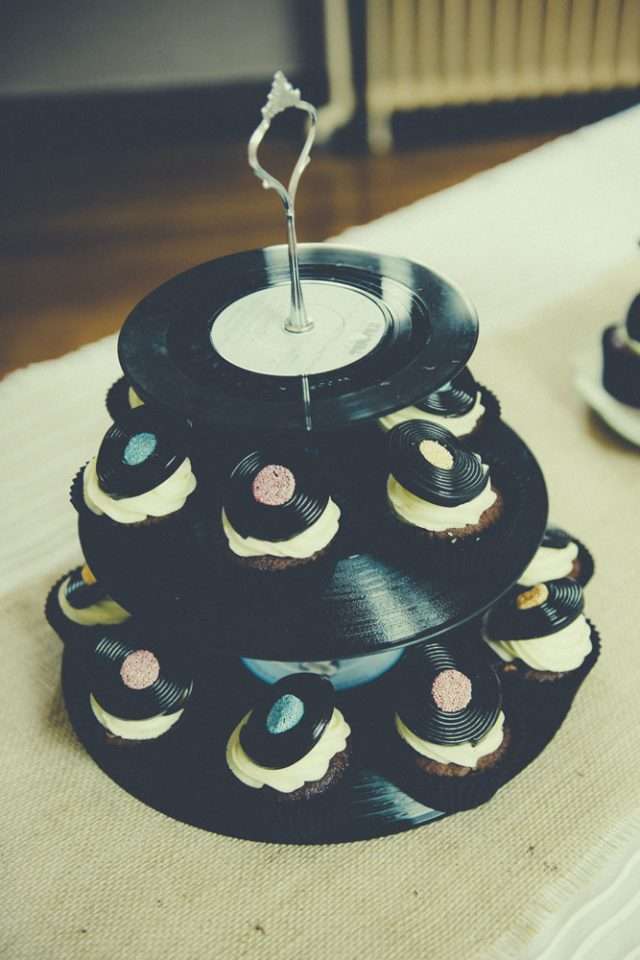 The ceremony was held in a little village called Bromborough on the Wirral, where Shaun grew up and the couple now live. “Getting married in a church was something I had always wanted. I couldn’t have imagined getting married anywhere else. The reception followed in Hulme Hall in Port Sunlight. We chose the venue because it was local and we didn’t want to go anywhere too far away from home. The venue itself is famous for being the place where The Beatles made their first appearance with Ringo Starr in 1962!” 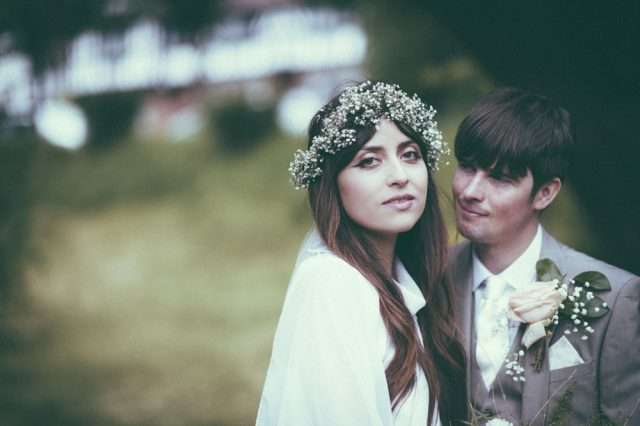 “We made our invites, table plan and the favours (personalised CDs with our favourite love songs on). Our tables were named after famous couples in Rock n Roll. We had tables named after Johnny and June Cash, Elvis and Priscilla, John and Yoko and Paul and Linda McCartney to name a few.” 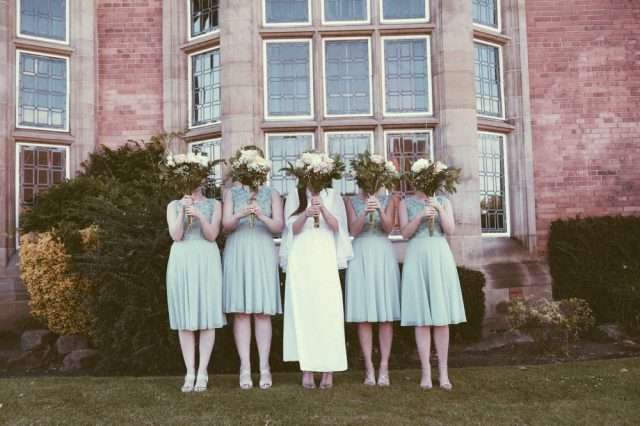 “The best part of the wedding was driving in our wedding car after our ceremony, on the way to the reception. We had a bottle of champagne and just giggled to each other the whole way. It was just what we needed after exchanging our vows! It gave us time to be together and to look forward to the rest of the day.” 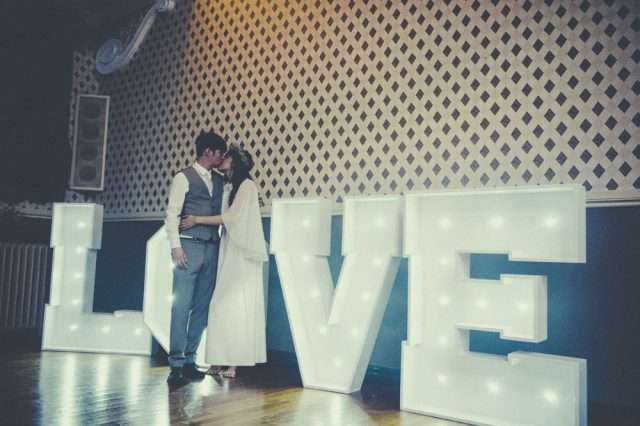 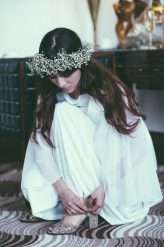 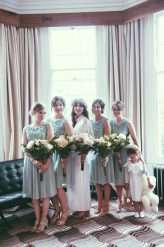 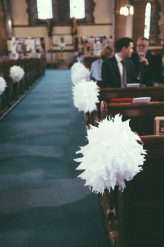 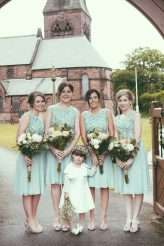 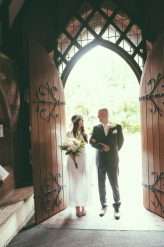 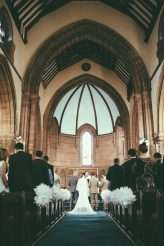 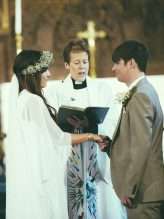 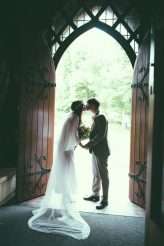 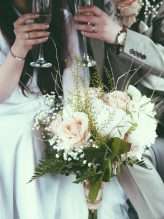 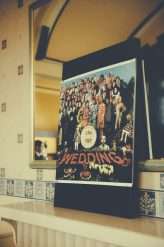 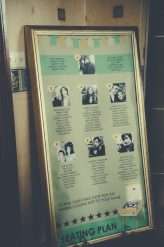 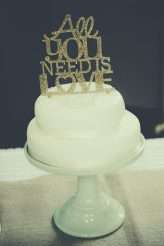 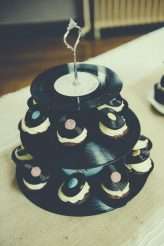 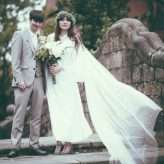 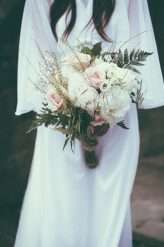 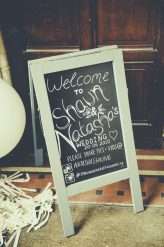