High school sweethearts Victoria and Ian were married in May. Their wedding was loosely based on their love of Glastonbury festival with references including their invites and the decorations.

“We wanted the wedding to be fun and informal”, said Victoria, “and we really wanted to have the ceremony outside. We fell in love with a secret garden at Burton Manor but it wasn’t licenced for ceremonies. So we decided to sign the register a day earlier and have a non-legal ceremony on the day that we organised ourselves. It was a massive gamble on the weather, but we lucked out and had lovely sun throughout. My uncle Tony played guitar for the guests as they arrived and we supplied camping chairs for the ‘more mature’ festival goers, while other guests remained standing for the whole ceremony.” 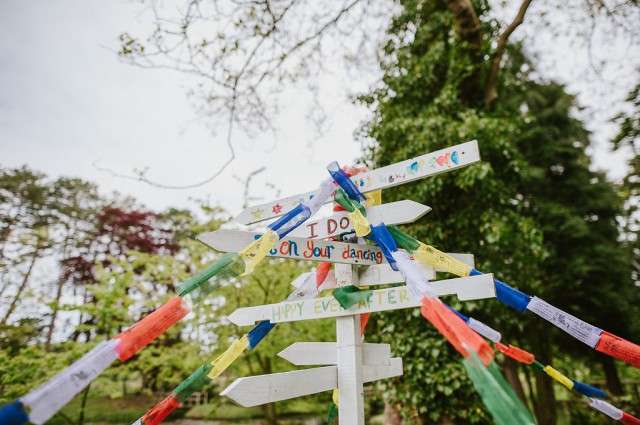 “The only thing I knew about flowers is that I wanted them bright and colourful”, she continued. “I let our florist use their imagination to create an amazing surprise for us on the morning of the wedding. The flowers were one of the highlights of the day and took the least amount of effort and stress.”

“One of our favourite things was our rings. We couldn’t find rings any that we liked so we decided to do a wedding ring workshop to make our own! We did everything for them including coming up with the ideas and melting down Ian’s granddad’s ring to use. They are now even more personal and special because we made them ourselves.” 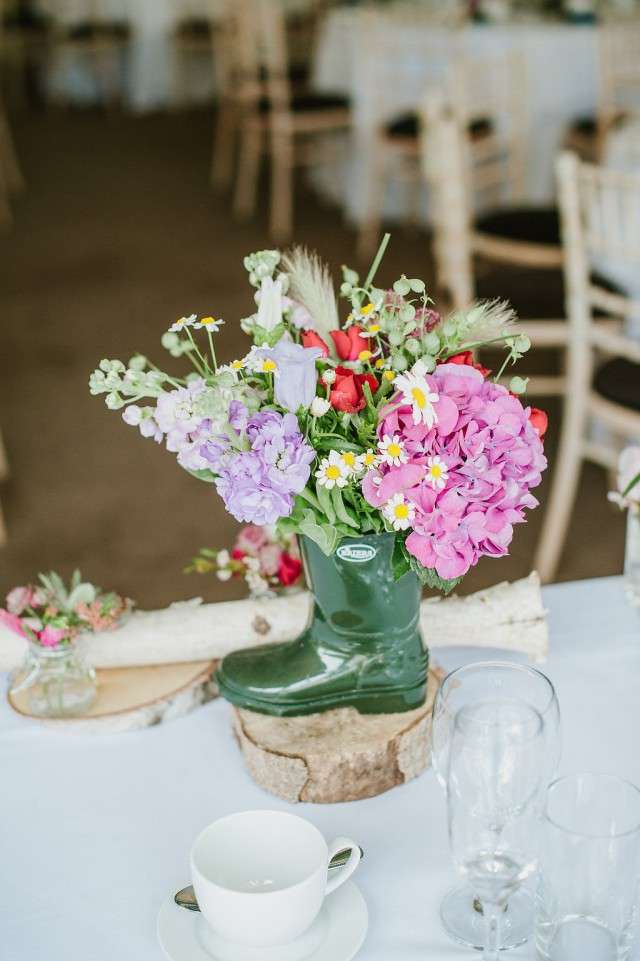 The reception was held at Thornton Manor, Cheshire. “The festival vibe continued at the the reception. We had a live band and DJ lined up on the ‘main stage’, as well as our hay bale circle outside with a selection of instruments for ‘festival goers’ to make their own music and entertainment.” 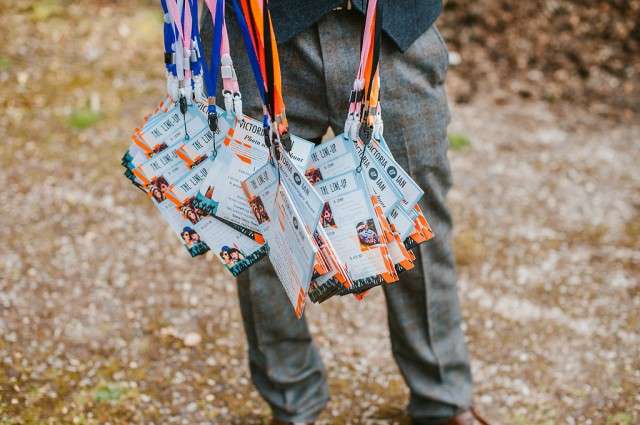 “We handmade most of the decorations and stationery”, she explained. “The dad of one bridesmaids made wooden crates and stencilled our names and the date on the side. He also made a fantastic box for the ladies room, that we then filled with goodies including from lollipops and plasters. These DIY items are still special to us and we have them at home now which is a nice reminder of our wedding day. The cakes were made by guests – we had a cake competition!” 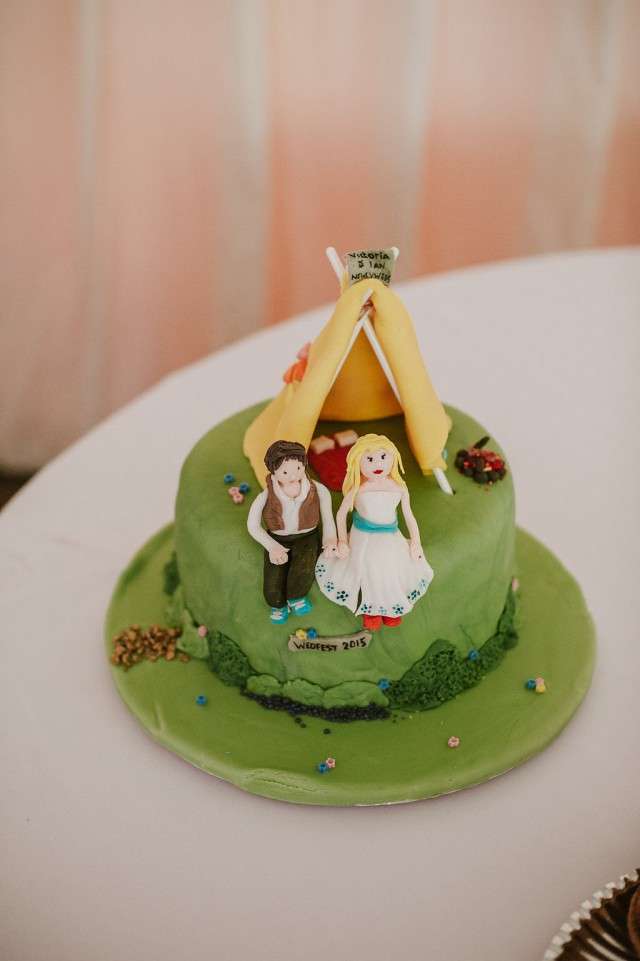 “Our venue was the most expensive thing but we tried to save money everywhere else like having an afternoon tea instead of a formal three-course dinner. I always wanted an Ian Stuart dress, but knew I couldn’t afford the price tag, so I bought a sample from London Bride Couture. We got Kinder Surprise eggs as a fun alternative to traditional favours.” 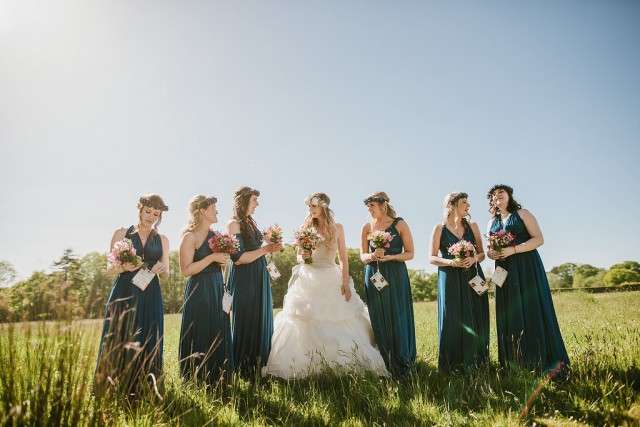 “If we could do anything again, I wish that during the wedding breakfast we’d made time to go around each table to say hello”, the bride concluded. “The day went so quickly, it was hard to get around everybody later on.” 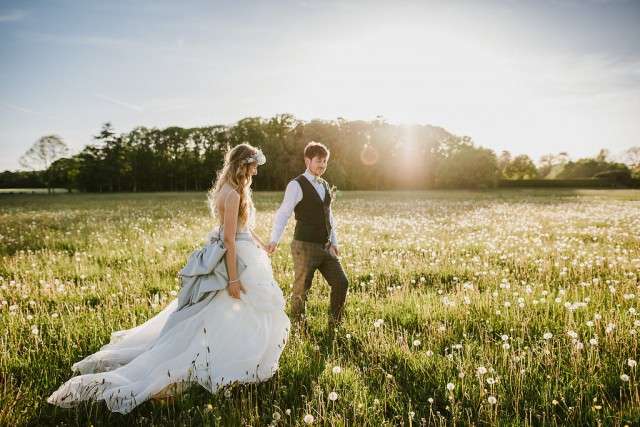 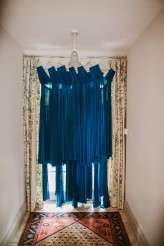 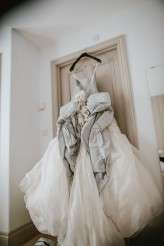 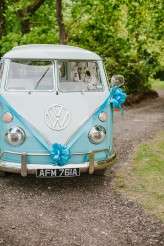 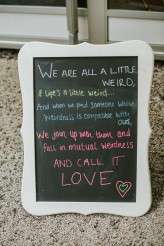 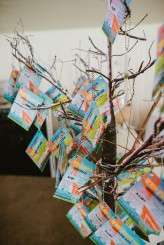 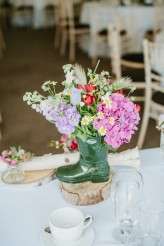 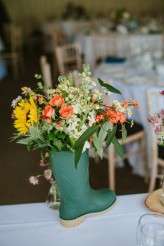 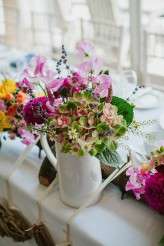 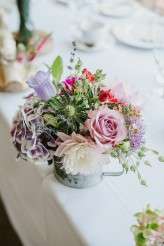 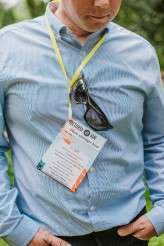 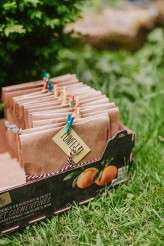 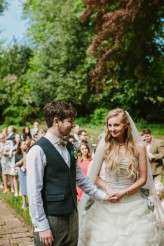 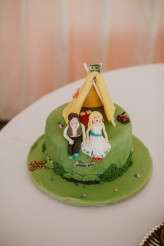 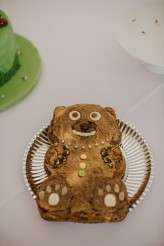 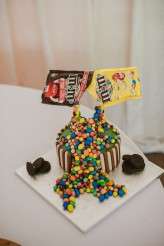 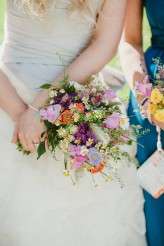 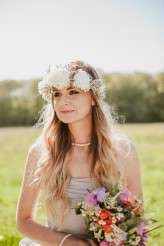 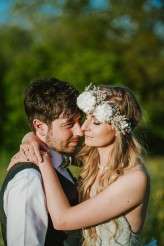