Oh how I’ve been dying to see this movie. Who doesn’t love a good wedding chick flick? I was super jealous last month when I read that all my favourite US bloggers were getting to see the film before the rest of the world but now it’s our turn!

The movie isn’t released in the UK until June 22nd but Universal Pictures and the incredible Charley from London Bride have arranged an exclusive (and I mean exclusive – the cinema only hold 45 people) preview showing of the film on Wednesday 15th June. There will even be free drinks and canapés. I’m SOLD! I’ll be heading down to Soho Hotel, London with a bunch of other wedding obsessives, giant bowl of sweet popcorn in tow.

The best bit though? I have two tickets for you and a friend to come along and join in the fun too. 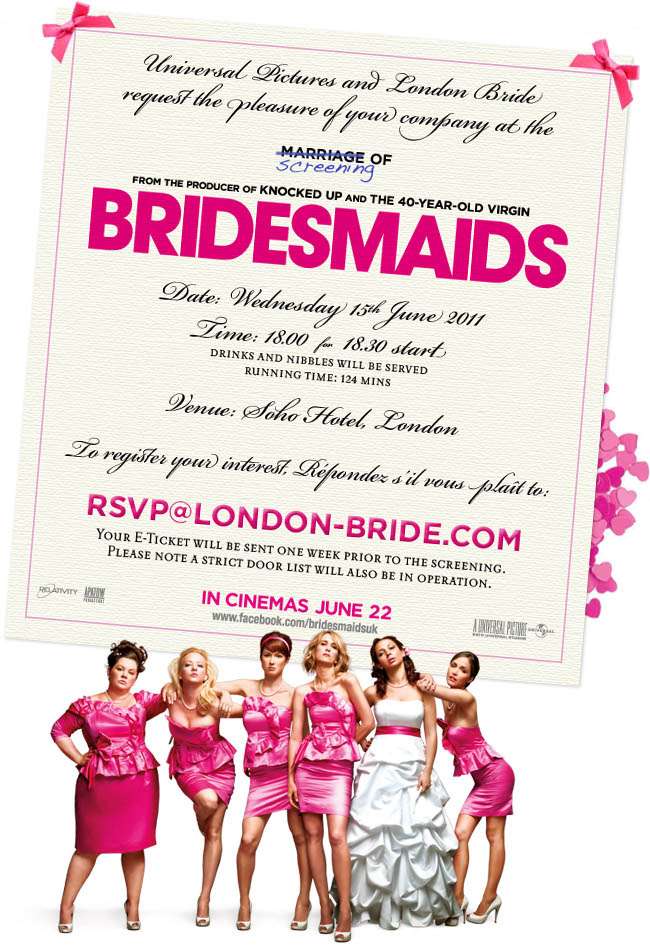 For your chance to win, all you need to do is send an email with the subject line “Bridesmaids: The Movie – Win Tickets to an EXCLUSIVE Pre-Release Screening” to rsvp@london-bride.com. Remember to include you name and your guest’s full name in the email. The winner will be chosen at random and announced on Rock n Roll Bride on the 9th June in my Thursday Treats post.

I’ll see you there!

To hear more about the film that’s been dubbed ‘The Hangover for girls’, be sure to join in the fun over on the official Facebook page.