This British groom and his Texan bride may have met at a Chicago Cubs game but flew back to Texas to get married. Both parties brought some of themselves into their day – most notably in the cakes! Matt must certainly be a football (soccer) fan. I loving Holly’s Justina McCaffrey dress from Belle Vie Bridal Couture in downtown Chicago, the Rock n Roll graffiti portraits (’til death do us part’ how perfect is that!?) and the masquerade ball-esque masks. 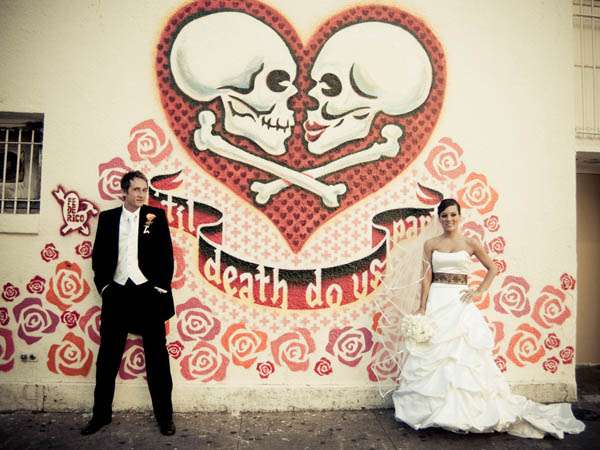 Thank you to photographer, Belen for sharing these today 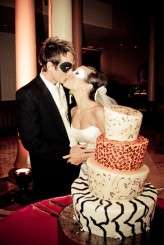 "Woodland party circus!" replied newlywed Kat when I asked her to describe her wedding. "At least that was the three things we kept saying to people when they asked what our wedding was going to be like." Kat & Mat were married at The Hideout, a bar and music venue in Chicago. "We really didn't want to have a traditional banquet wedding, and we both wanted something that was very relaxed", the bride continued. "The ceremony was an important part of the day for us but we also knew the party was equally important! We saw the reception part of the evening an opportunity to really celebrate with all the friends and family who had come from both close (a few blocks away) and far (as far as Australia). We racked our brains and both of us have some great memories of The Hideout. We spend a lot of time going to shows there and we even first met at one, so it seemed like a natural fit. I think the venue was what really made our wedding special and started to really define how we were going to work in the rest of the details."