Good morning guys. I am very excited today to share the love story of Vana & Damien, our fabulous competition winners.  I can’t wait to go to their wedding in November…they are just such an awesome couple.

Come on then guys…tell me all about yourselves!

When I first met Damien I was 12 and hanging around outside my music class.

I spotted this cute boy with that odd 90’s curtain haircut that was all the rage (why?!) But obviously being 15 (so much older and  more sophisticated) he had no idea I was even alive.

At 15 I’d acquired a couple of things that made me noticeable *ahem* – and we started dating. It was a brief summer thing which ended when Damien moved to Bristol. I cried in my bedroom listening to Slayers – Undisputed Attitude for about a week, before vowing to chop my hair off, move to London and become a punk. Which I subsequently did a year later – oh the folly of youth!

Almost a decade later Damien got my e-mail address from a random mutual friend, and got back in touch with me. We e-mailed back and forth, and chatted on instant messenger for what seemed like ages.

Then one day he called me and said he was playing a gig in Camden and did I fancy meeting up.

I was so nervous I nearly didn’t go and as my friends and I were mooching around outside deciding which bar to blow the gig off for, he came out of the venue with his guitarist!

Damien tells me he knew in that instance that he’d fallen in love.

After the gig his band made their way back to Bristol minus a drummer!

We stayed up and drank ourselves sober with vodka, and talked on my sofa till 6am. Somehow he never made the train back home that day, nor the next day, or the one after that.We’ve been totally inseparable ever since.

Damien proposed to me on our two year anniversary, it was a rainy day and we were at Pendennis Castle.All of a sudden he starts saying “No way, that’s so beautiful – look babe”, I couldn’t look as he was peering out of a tiny teeny window and was blocking the view.

Then he turned around and all I saw was a sparkly ring.

I just started grinning like a village idiot, jumping up and down and all manner of strange sounds exited my for once speechless mouth!

So that’s our little love story, we’re totally blown away that Kat and David have chosen us as the winners for the competition.

It’s the best wedding present ever!

Are you as in love with them as I am?

Here they are the day they met up after all those years and feel in lurrrve! 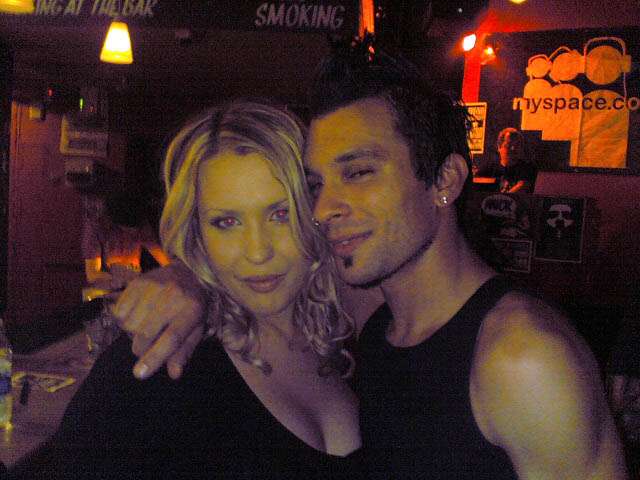