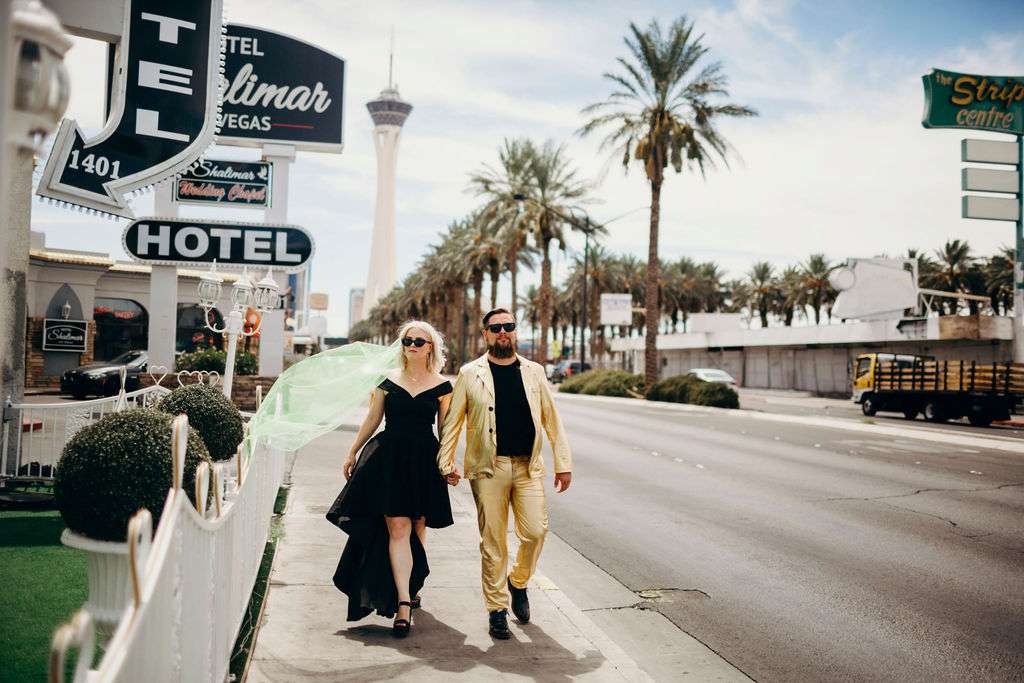 Christine and Eddie’s elopement is like a lot of the Vegas weddings we feature in so much as they had a quickie quickie chapel ceremony and spent the afternoon waltzing around the city taking fabulous photos. The thing that really made their day stand out to us though was Christine’s INCREDIBLE one-of-a-kind outfit, it’s not every day we see a bride rocking a (home made!) neon green veil!

They were married in August at A Little White Wedding Chapel. “The idea for our wedding was for it to be Vegas, fun and intimate”, said the bride. “We honestly did not use much for inspiration, we wanted to just do our own thing and do it in a way that we would love and remember. We wanted to keep it about us and just have fun with it.” 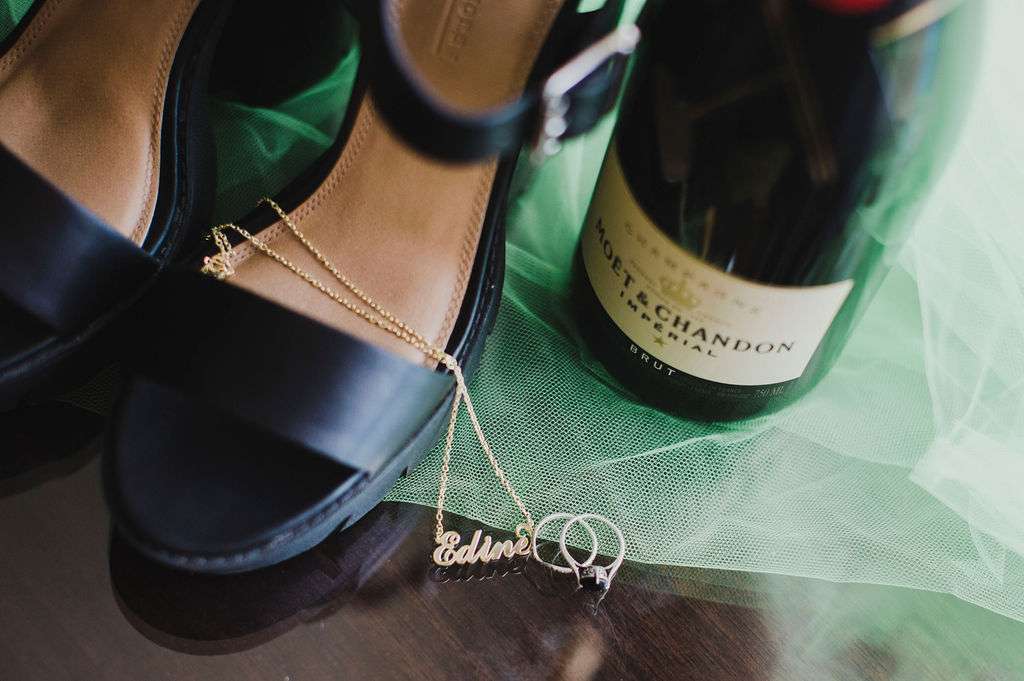 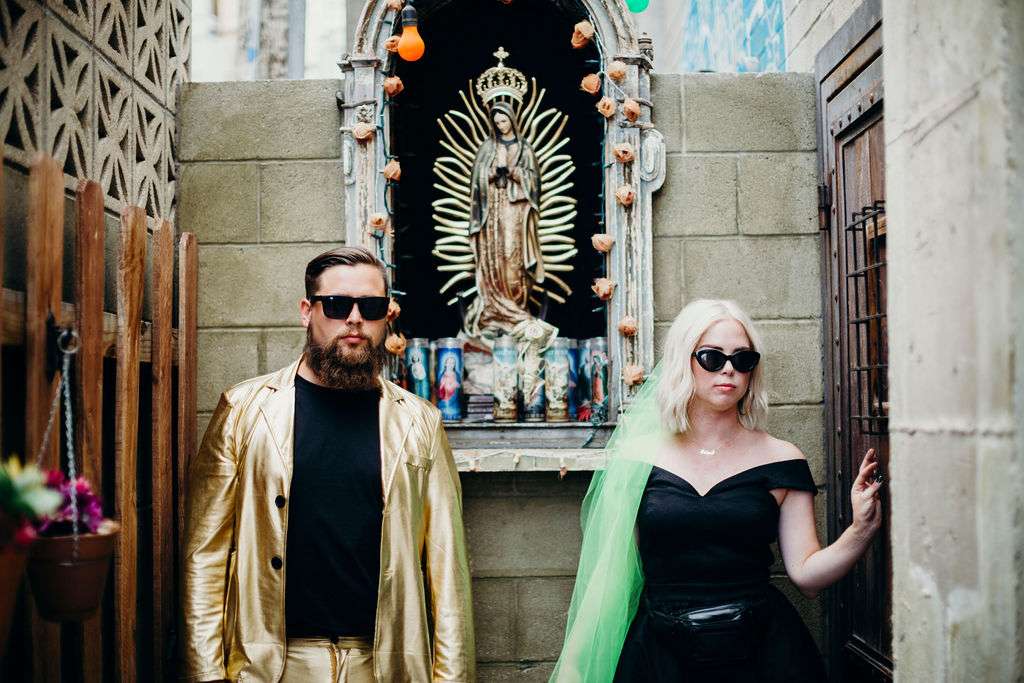 “I definitely think our outfits were very unique. They are not something that a bride and groom normally wear. I always loved the idea of having a black wedding dress and my green veil was  just green tulle I bought and put in with bobby pins! Eddie’s gold suit went perfect with my black dress and the wedding location. I also had a necklace made that says ‘Edine’, which is the couple name we gave ourselves.” 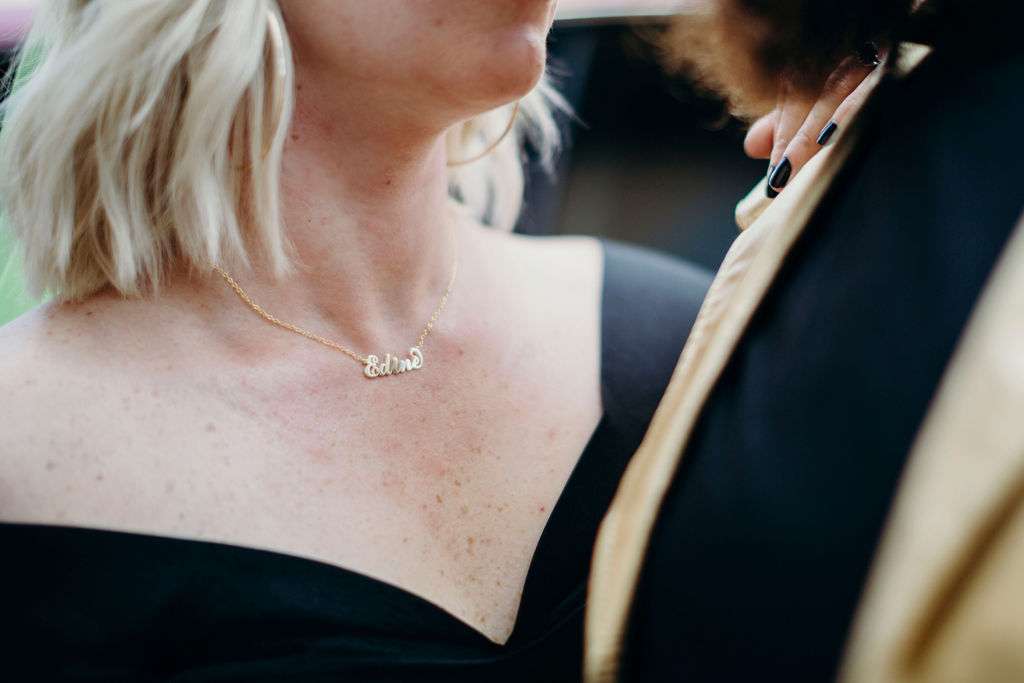 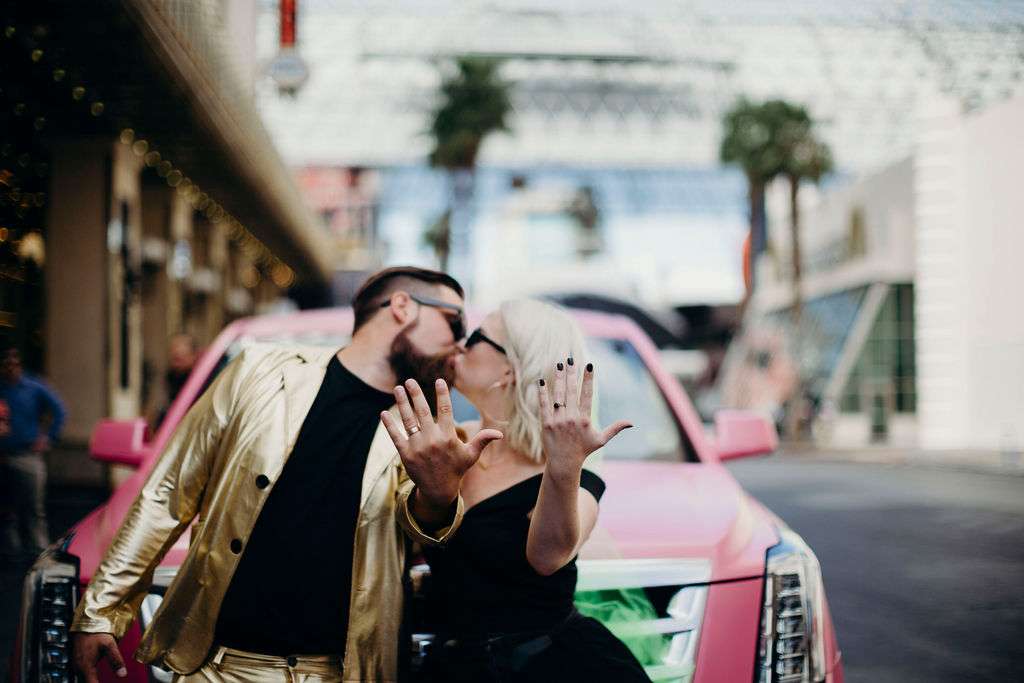 Although this was a small wedding, it wasn’t technically an elopement as they invited a few members of their family to be there with them. “We originally wanted it to just be the two of us, but decided that we would also want our immediate family to be there when we said our vows”, she explained. “The ceremony was outside the chapel in the gazebo, it was only about 10 minutes long but just how we wanted it.” 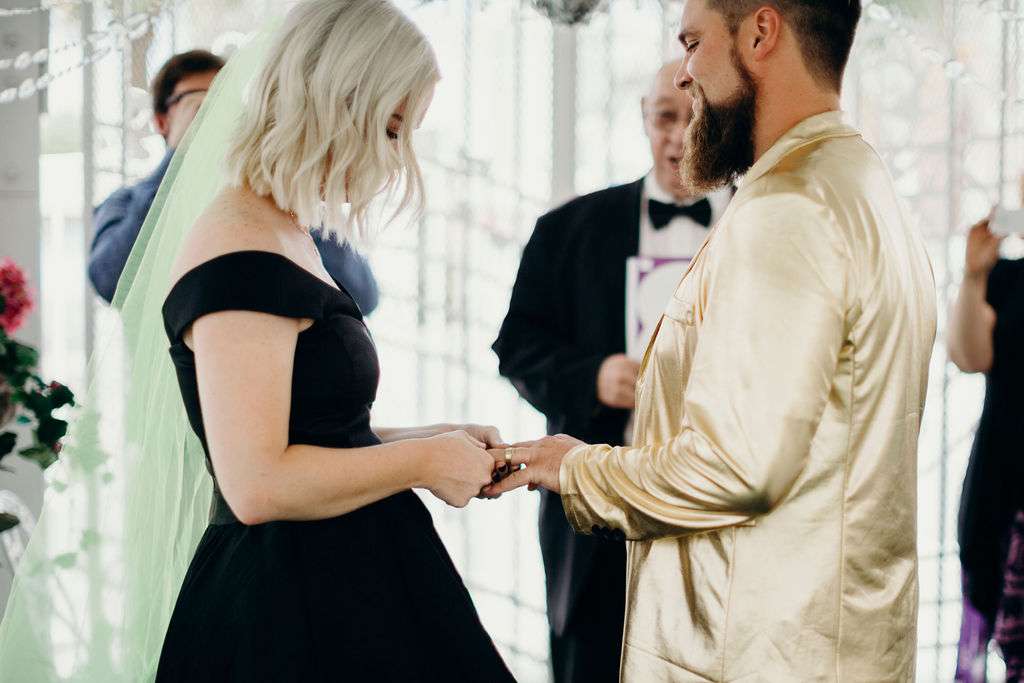 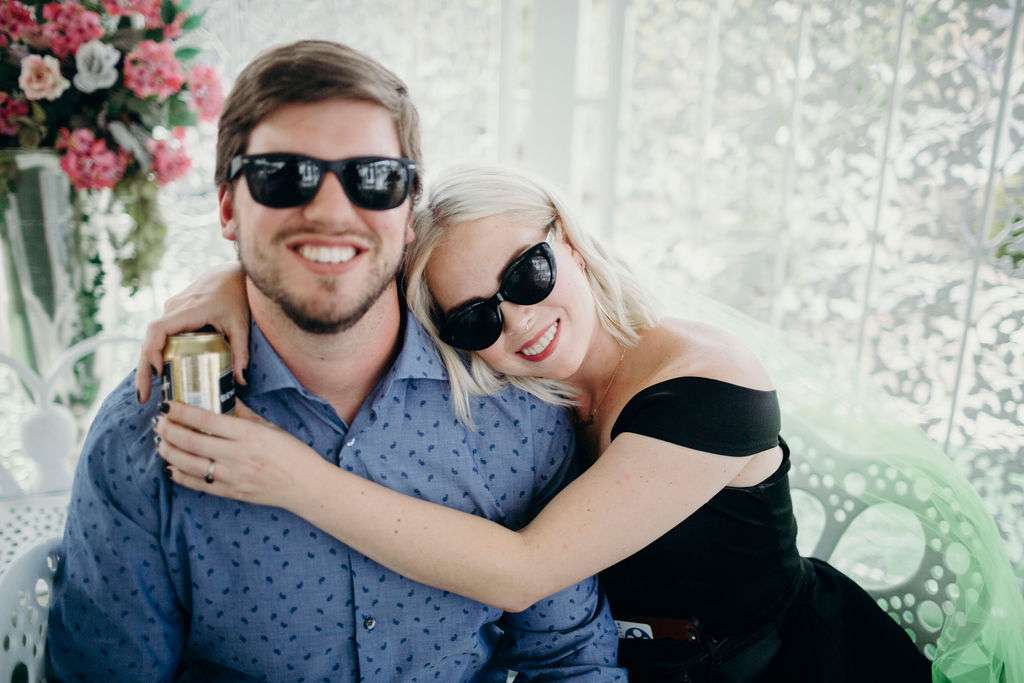 “We had no real budget and we didn’t splurge on anything except the limo but if your’re in Vegas you might as well rent a pink limo to drive you around! We kept things to a minimum and did not get extras that were not for us. We opted out of things like flowers and a cake. I am also lucky enough that my sister photographs weddings for a living so we did not have to put out money for that, which would have been the biggest expense.” 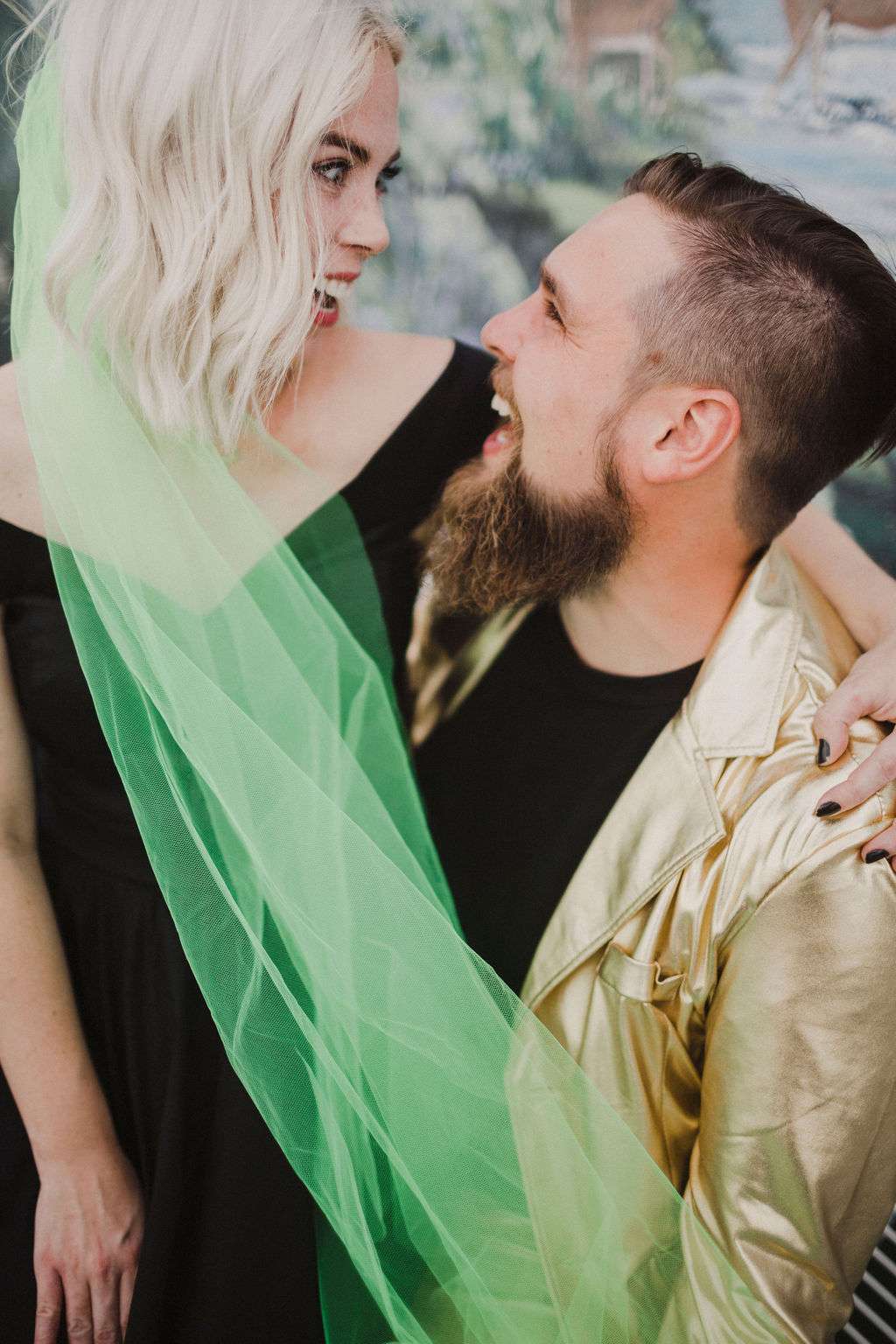 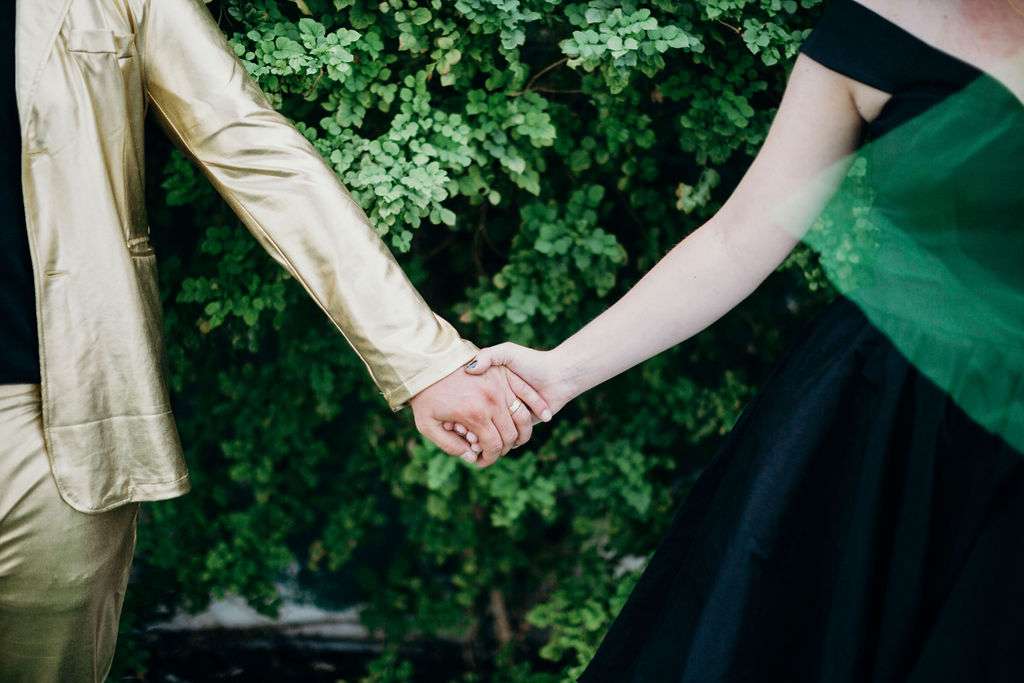 “Our advice for other couples would be to stick to what you want and your vision”,. she concluded. “Especially when you are not sticking to the norm you will get a lot of weird looks or questions. This day is about the two of you and celebrating your love. I am so happy that when we look back at the day it is us. I feel like if we went a different route we would have regretted not sticking to what we had wanted. Enjoy every second and do you… Oh and take Vitamin C before! I ended up having the worst cold and losing my voice. I still had the best day but it would have been nice not being sick!” 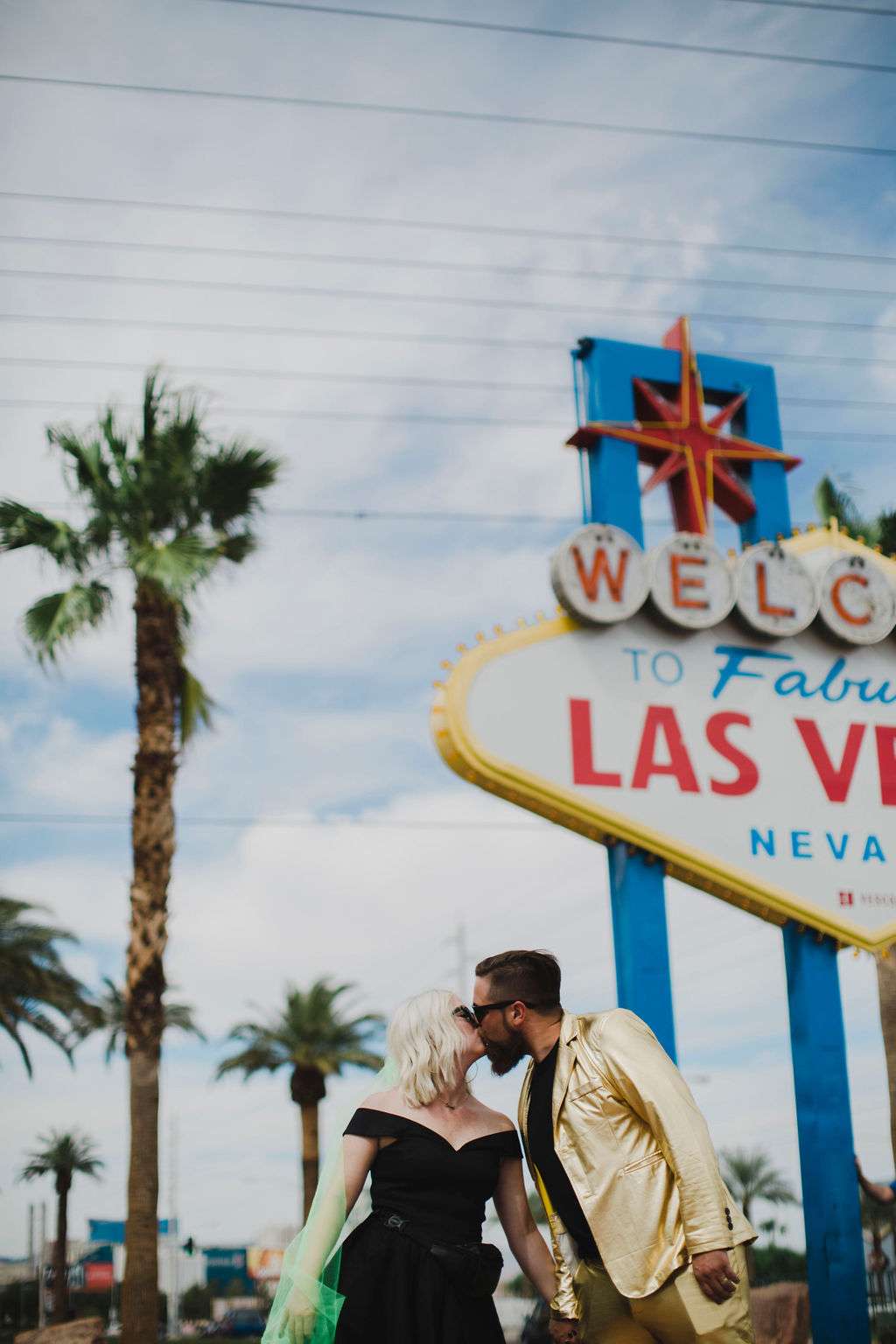 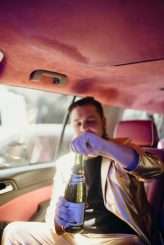 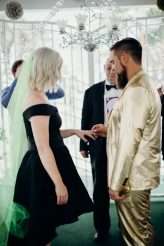 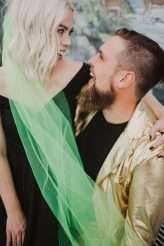 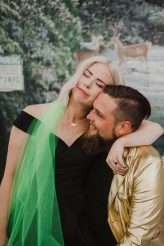 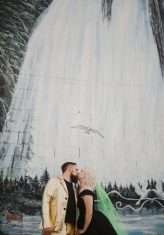 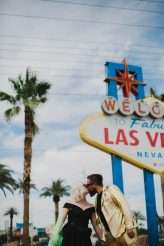 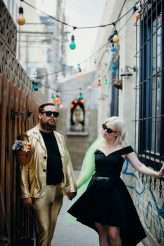 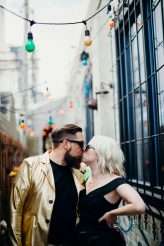 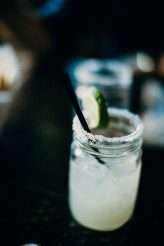