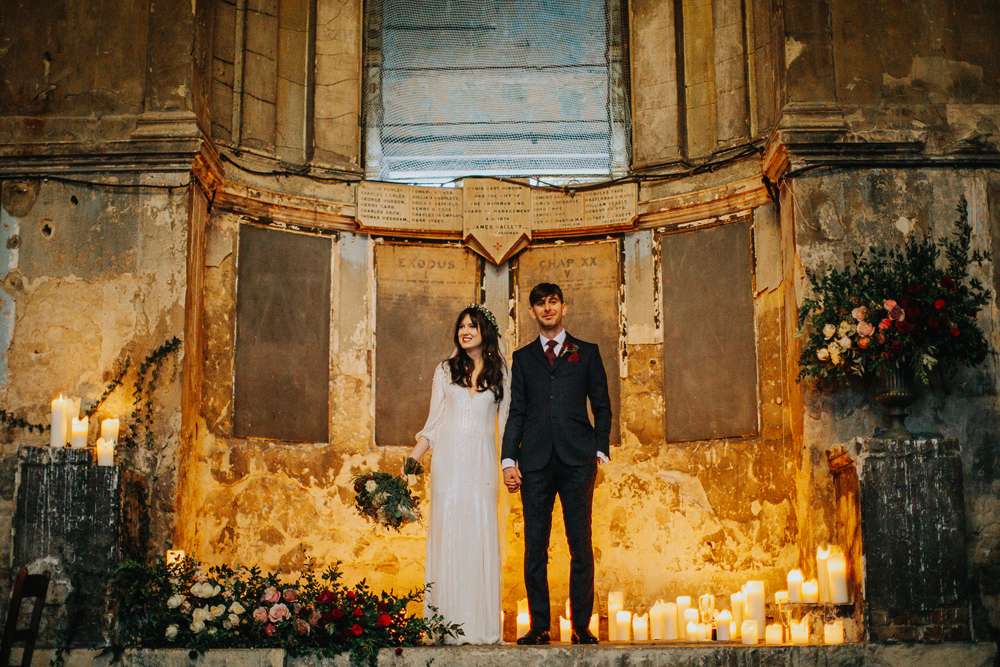 Tara and Mido’s wedding took place in December has style in buckets – and we mean BIG buckets. Christmastime is magical in London anyway but this gorgeous couple really brought the sparkle and glamour with their celebration. They described it as ‘Baz Luhrmann’s Romeo and Juliet meets a Vanity Fair shoot’ – we love that! The wonderfully talented Lisa from Devlin Photos captured it perfectly in all its glory.

Tara looked a vision of old-school-inspired glamour with hair and make up by Lou Seymour and the beautiful embellished Lara dress by Jenny Packham. Her bridesmaids are a vision too in a mixture of high street and vintage, which they picked themselves upon being told the colour palette was gold. 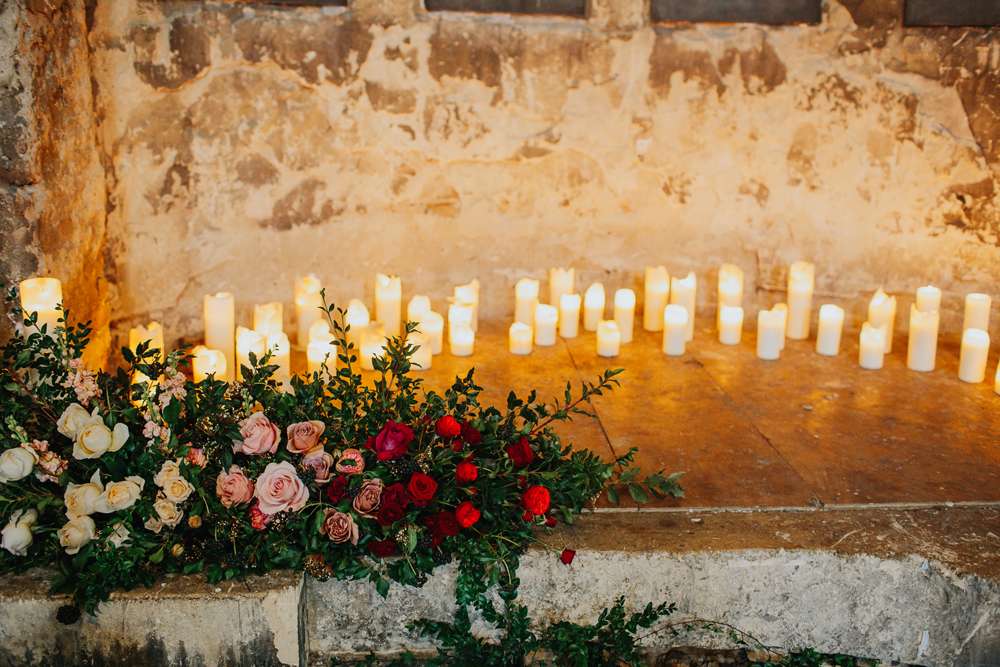 Despite living in New York throughout the entire planning process, Tara and Mido planned the day of their dreams with their ideal suppliers who made it completely personal to them. Tara explains, “Our two venues, the Asylum in Peckham for our ceremony, and Brunswick House in Vauxhall for the reception, were so unique that we didn’t have to do much. They really set the tone for the whole day.”

She continues, “We live in New York so it was difficult meeting up with vendors, but we made it work. We owe a massive thanks to Liza at the Asylum who set up the candles and fairy lights in the chapel and made it look so pretty. The service all came together perfectly, with the lights and candles and my dreamy flowers from Red Eden and Olive, and was my favourite part of the wedding.” 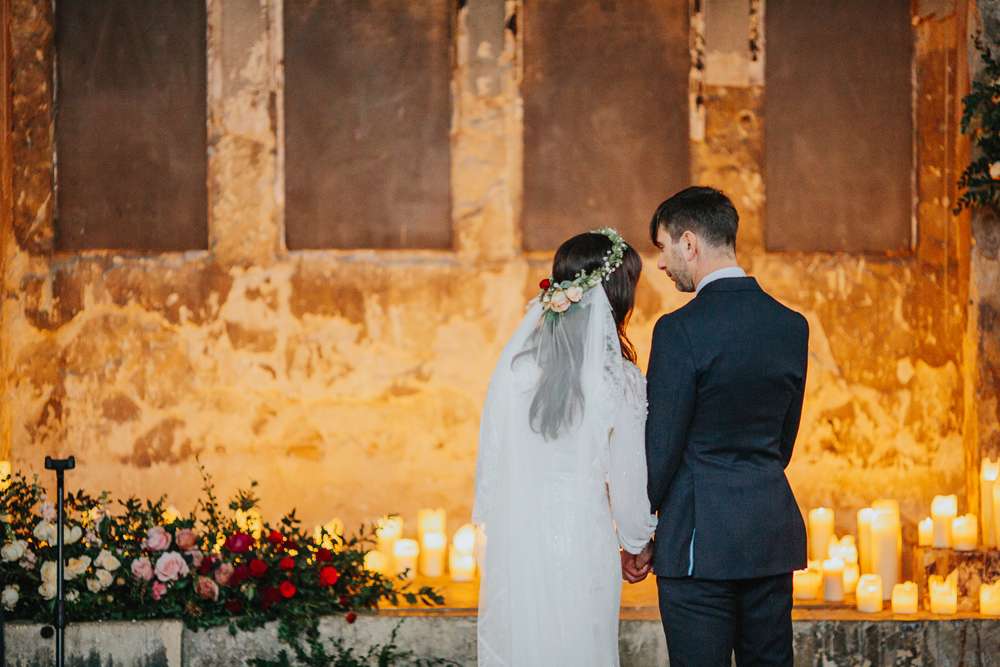 As Tara and Mido met at Latitude Festival, and Mido is a tour manager and sound engineer for musicians, music was an incredibly important part of the day. “I walked down the aisle to a string quartet playing Ladies and Gentlemen We Are Floating in Space by Spiritualized, which was incredible. It’s one of our favourite songs and just before we started dating we went to see Spiritualized in LA so it’s very sentimental. Our very talented friends Robert Been of the Black Rebel Motorcycle Club and James Bagshaw of Temples performed songs on the guitar – Promise, and In My Life by the Beatles respectively, and were accompanied by a string quartet who also played whilst we signed the register and when we exited the chapel. My school friend Charlotte read a passage from The Humans by Matt Haig – it’s a great book!” 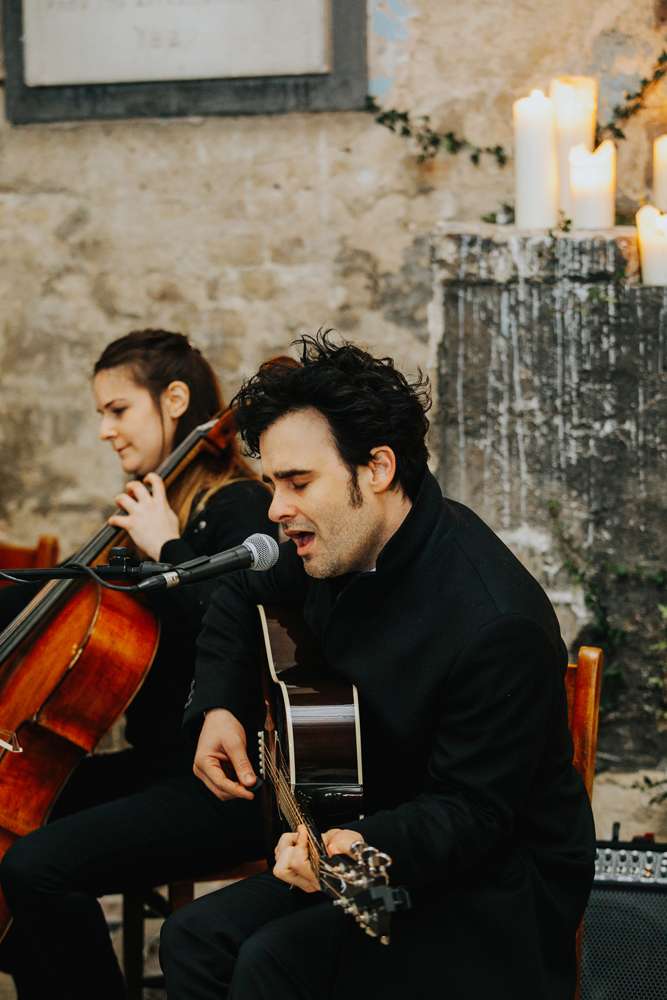 Guests were handed prosecco outside the chapel after the service. “We were quoted a ridiculous sum for caterers to hand it out,” Tara explains, “so we decided to do it ourselves instead. We bought some lovely prosecco from Aldi (yes, Aldi!) and 120 glasses from IKEA and asked the chapel to hand out the drinks. We saved a fortune!” 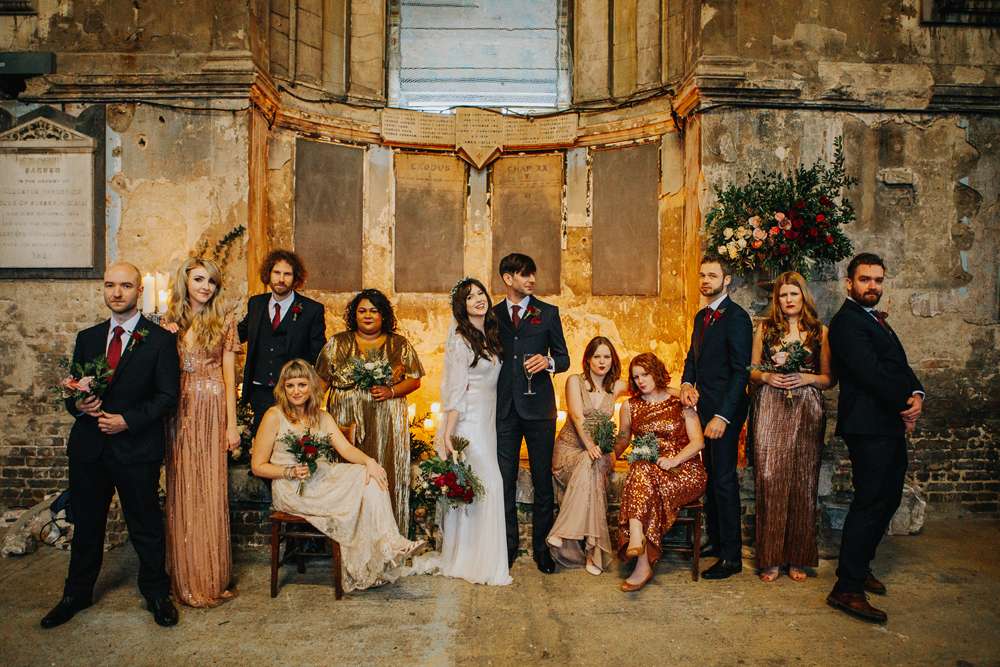 After the service, guests boarded a retro London Routemaster to get to Brunswick House: “It’s an amazingly unique venue with quality food and wine. We had a sit-down three-course meal with rare beef for 110 guests, which was our biggest expense, but it was worth it and everyone complimented it afterwards. Massive thanks to the unflappable Jo and Tammuz from Brunswick House who were brilliant.” 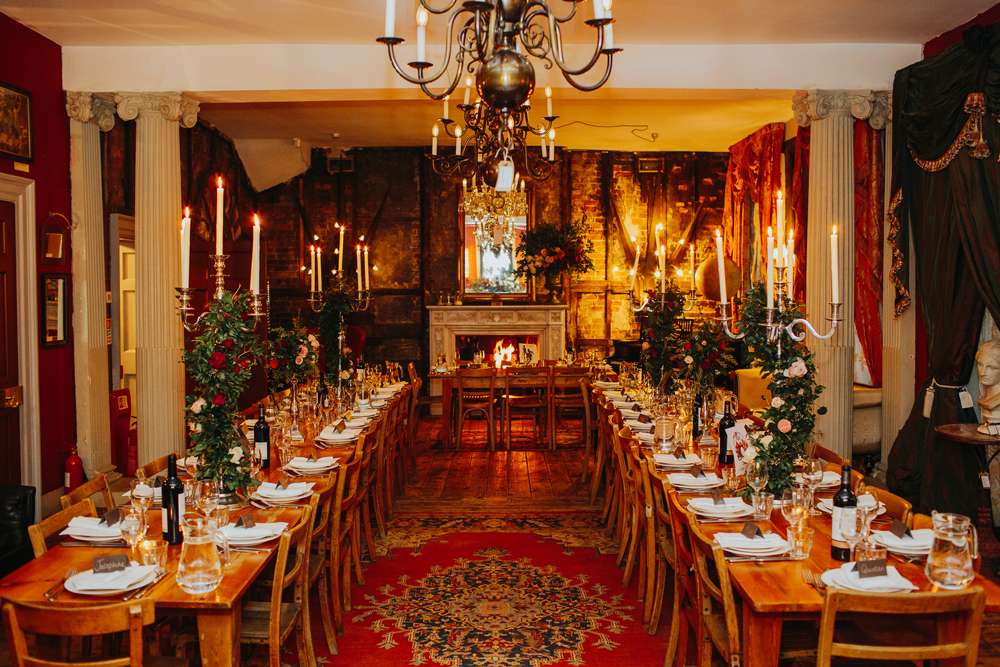 The table names were named after artwork from some of the couples’ favourite albums. “Our top table was David Bowie’s Hunky Dory! Nick Scott of Narcsville, one of our guests, helped design the table plan, save the dates and invites, which Mido helped put together – they were record sleeves. Mido also made an order of service for guests, which were put on the seats in the chapel.” 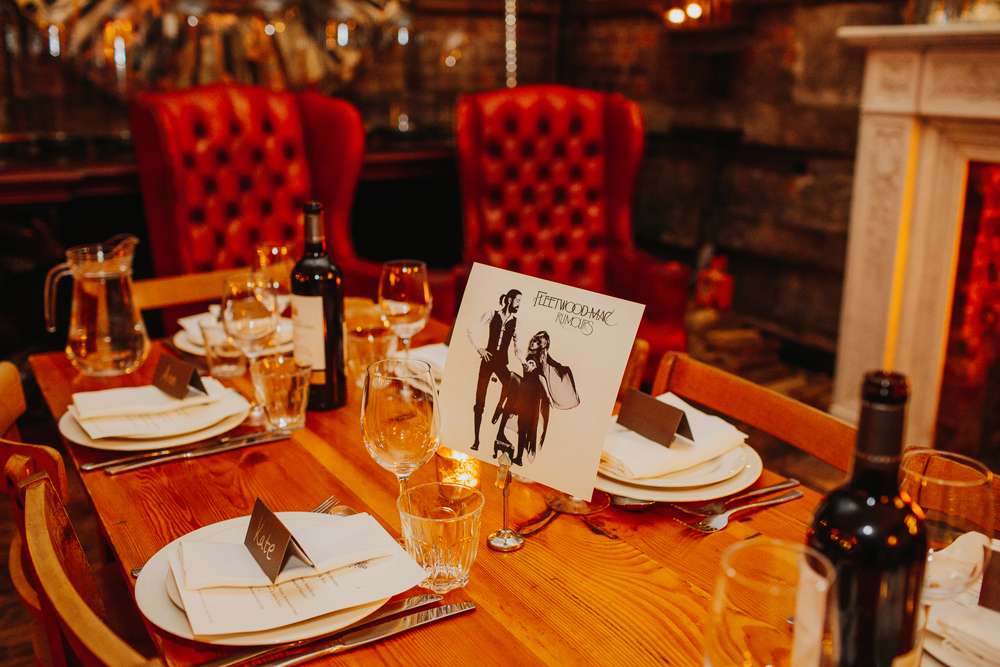 After the wrong PA system arrived and Mido had to get it working on his hands and knees, the guests then partied the night away, including DJ Sets from Nick Scott and Best Man, Ali Tant. “Everyone got too tipsy and we forgot to cut the beautiful cake from French Made,” Tara laughed. “I wish we had remembered! I also wish we had filmed the service to capture the amazing musical performances. Having said that, if things go wrong, shrug it off and don’t panic. Things will always go wrong. There’s nothing you can do, people won’t notice, so just carry on having fun. Our registrar was late and so poor Mido was left standing at the altar – someone had to tell guests I was outside and not to panic!” 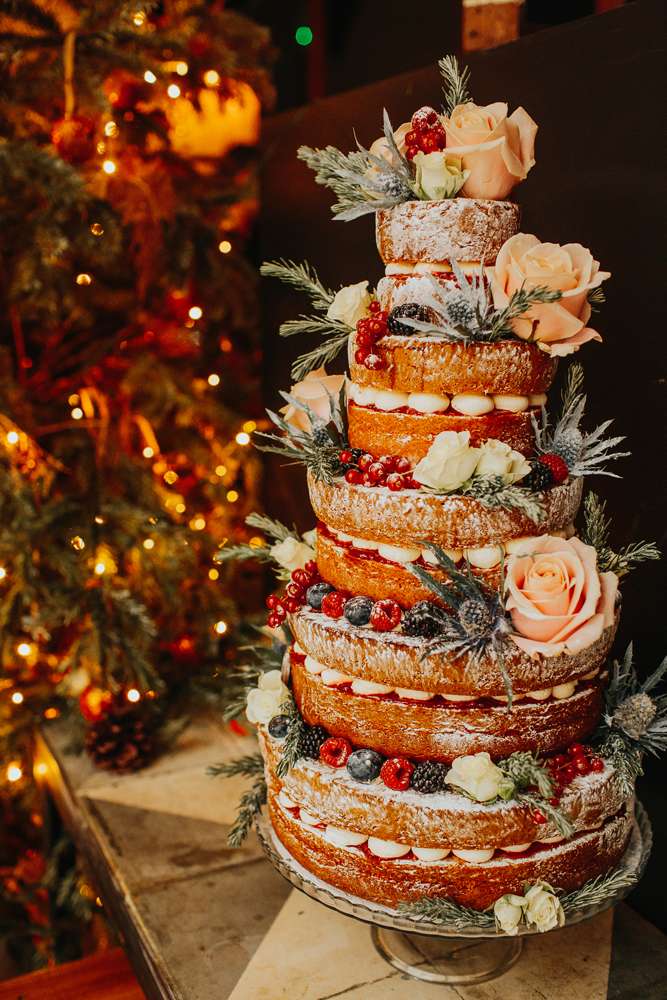 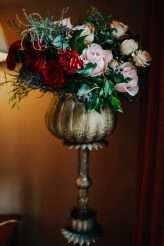 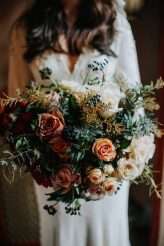 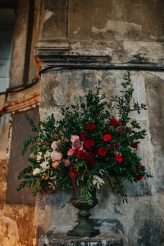 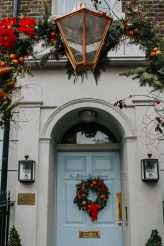 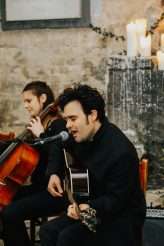 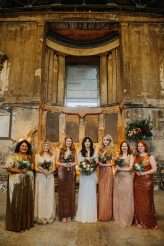 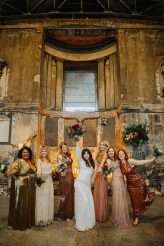 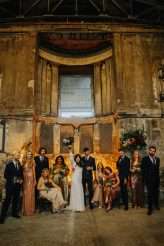 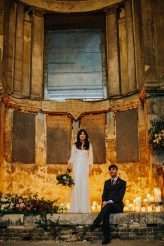 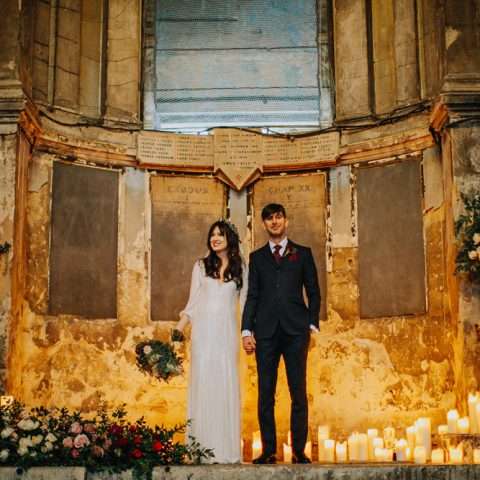 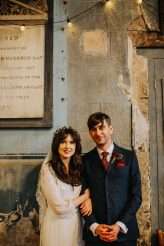 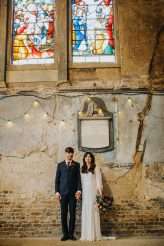 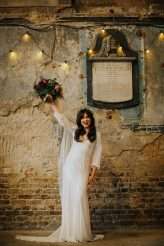 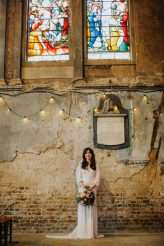 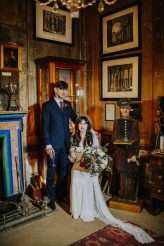 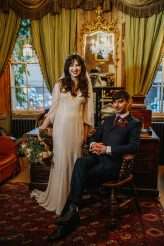 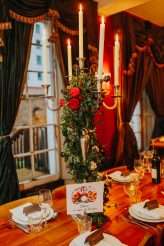 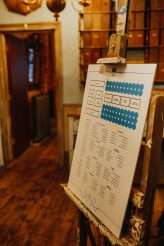 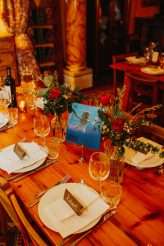 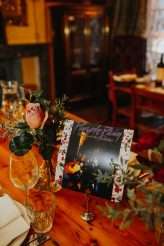 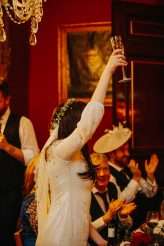 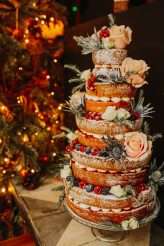 Jess and Paul's wedding is a modern day London fairytale. Their autumnal celebration featured a lot of gorgeous and delicate gold elements with splashes of pink, beautifully simple single-stem bouquets, and a plethora of incredible suppliers local to Islington, where they first meet for a date night after work.

Gothic Asylum Wedding with Baseball Bats Instead of Bouquets!

Stormy and Dan were married in London and although they didn't want a theme, their personalities and sense of style really came through on the day. "We flirted with the idea of a theme but to be honest it was difficult to find something that fitted the both of us and wasn't super stressful to implement", Stormy began.

Viki and Stef wanted to take the traditional wedding format and put their own spin on it. They were married at Asylum Chapel in Peckham, London followed by a reception at the Battersea Arts Centre complete with a 90s cover band!