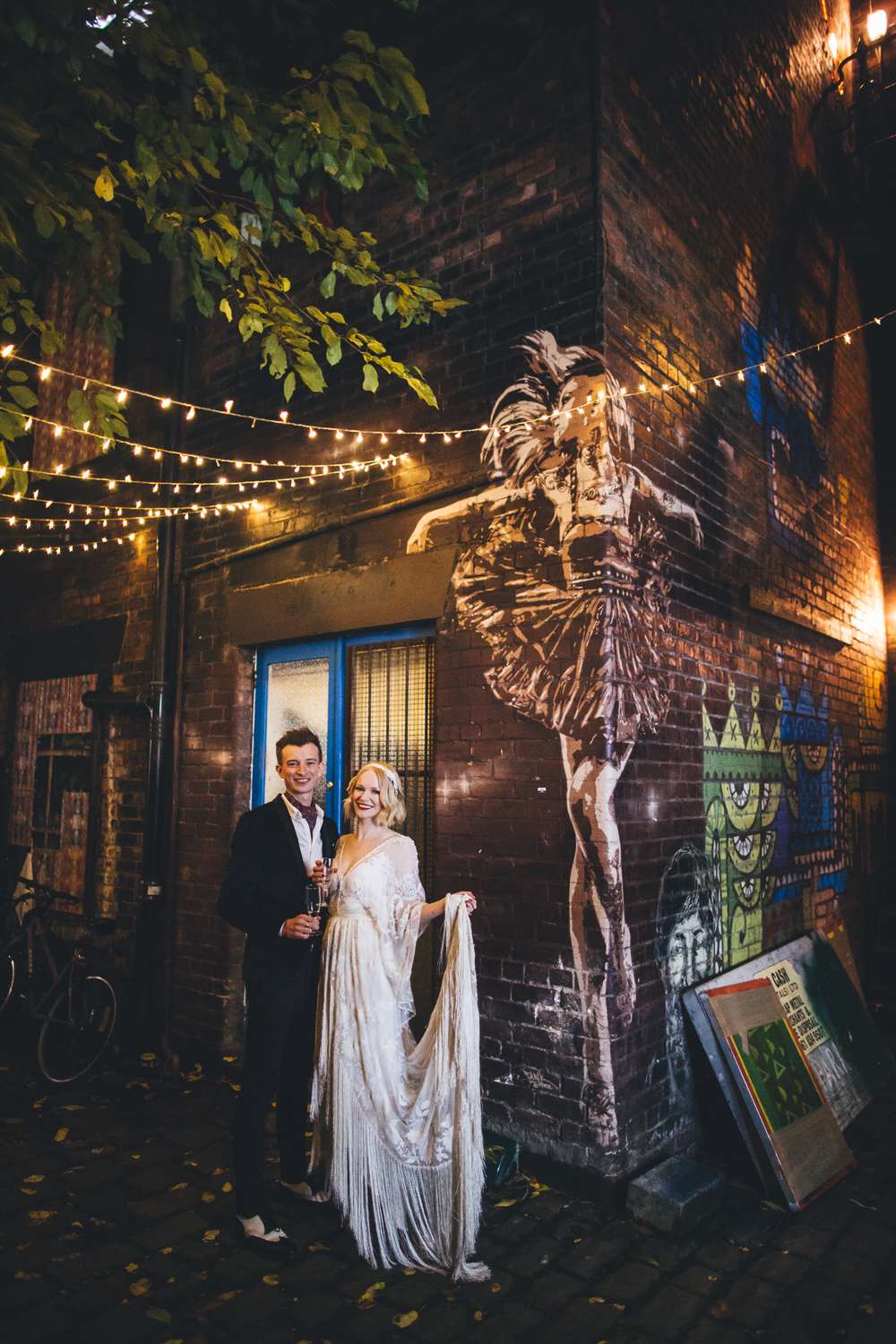 Jo and Gareth wanted to celebrate Manchester with their wedding. So they picked two iconic Manchester venues and had local music and poetry performances. They also only used suppliers based in the city. 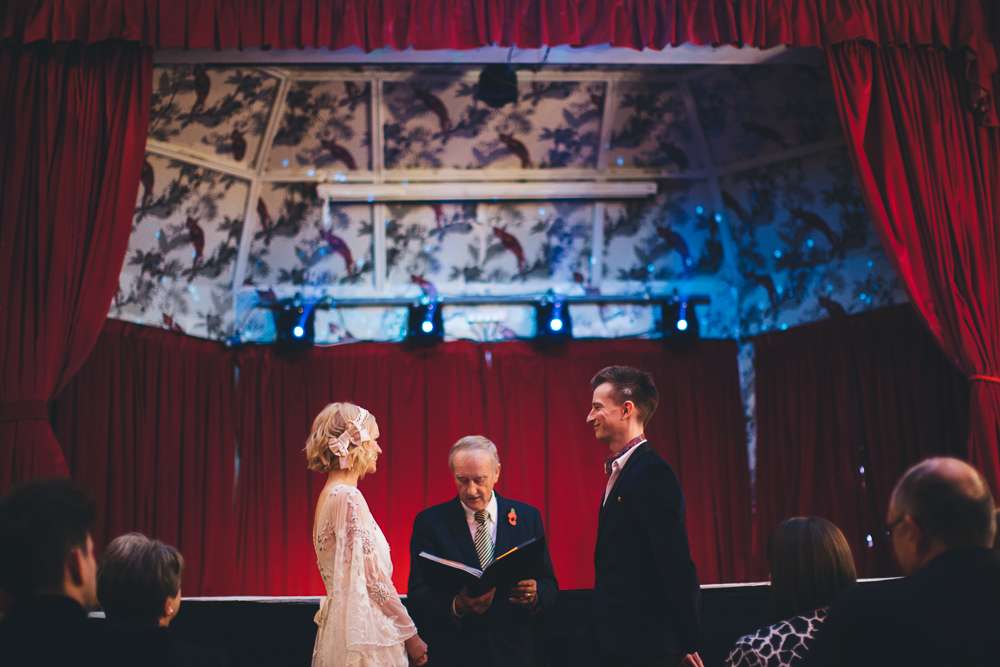 The ceremony was held at The Deaf Institute. “We really enjoyed the ceremony, our registrar was fantastic”, explained the bride. “He put us at ease and was really kind. We walked in together to Jumpin’ Jack Flash by The Rolling Stones which was a massive highlight! Our friend, Midge, read the poem I Wanna Be Yours by John Cooper Clarke, and we also played the poem St Anthony: An Ode to Anthony H. Wilson by Mike Garry. The room was the perfect setting with the stage, glitter ball, and wall of speakers. We walked out to Rebel Rebel by David Bowie whilst our guests threw confetti – it was so much fun!” 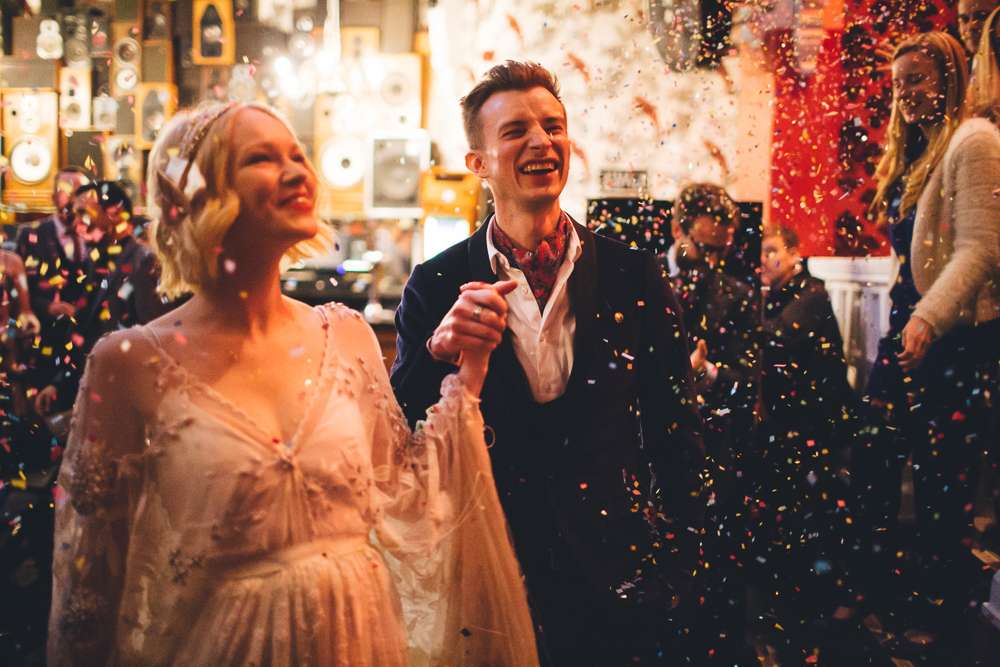 Afterwards their reception was held at Islington Mill, which they decorated themselves. “The reception venue was our biggest expense from out £7000 budget”, she continued. “It was still really good value, but we also paid for ourselves and some close friends to stay at the Mills’ B&B for the weekend to extend the celebrations. The décor was really cheap as we either made it, or bought it online. We actually really enjoyed decorating the Mill together on the morning of the wedding, with the help of four friends. Seeing all of our ideas and DIY come together was great, it was also fun to spend time with each other and friends that morning!” 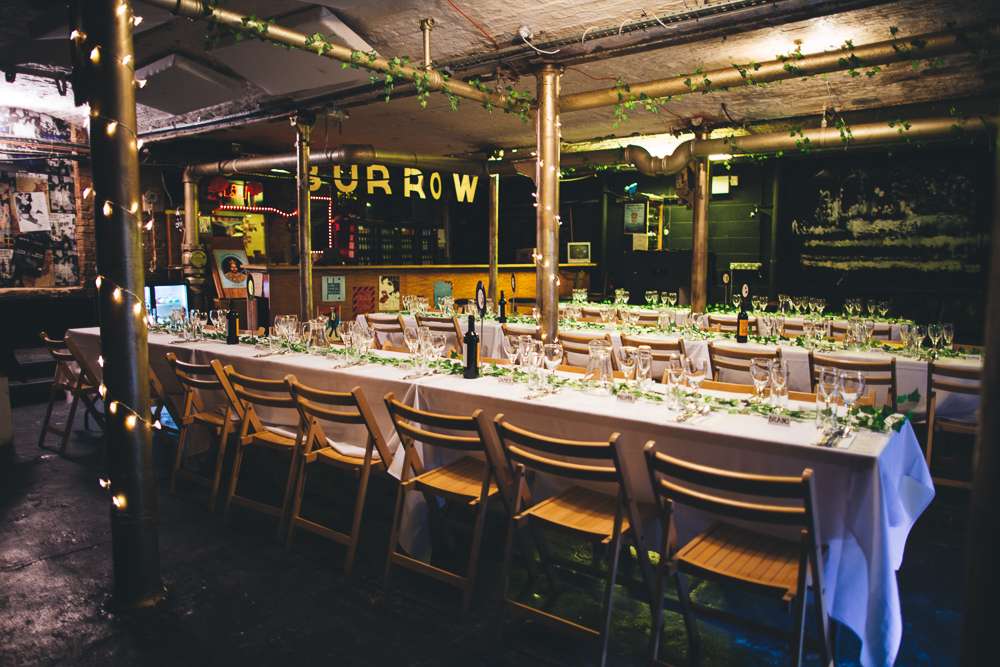 Jo knew she didn’t want to go down the usual bridal boutique route for her dress. “I avoided the typical visit to bridal shops, instead I looked at vintage and high street and didn’t expect to end up with a wedding dress”, she said. “I was open to any colour or style as long as I loved it. I ended up seeing my Rue de Seine dress on Pinterest but knew I couldn’t afford it. As I couldn’t stop thinking about it, one day I decided to look on eBay… just in case. There was one for sale in London, in my size! My headband was made to order, I have one similar with a black velvet ribbon that I wear often and have had for years. I contacted the designer, Little Fille, who no longer makes headbands, but she agreed to make one especially for me!” 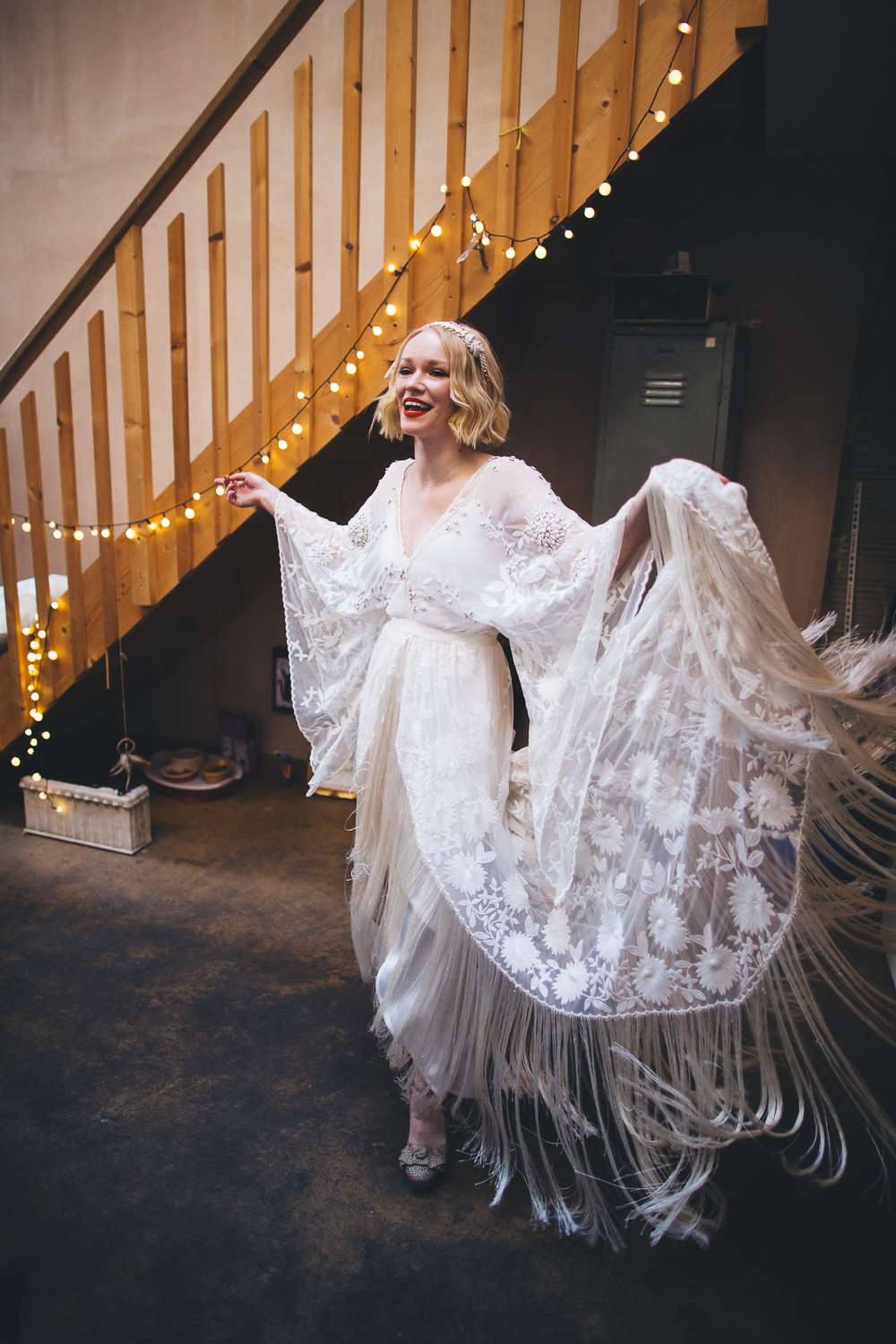 The groom wanted something similarly different for his outfit. “I was thinking about velvet or mod-style suits”, he said. “In the end I bought a navy velvet jacket with matching waistcoat from Noose & Monkey, a red paisley cravat online, a white shirt and black skinny trousers.”

“If our budget had allowed it, we would have loved to have had a video made”, Jo concluded. “Other than that we don’t really have regrets as we are so pleased to have achieved what we did with our budget.” 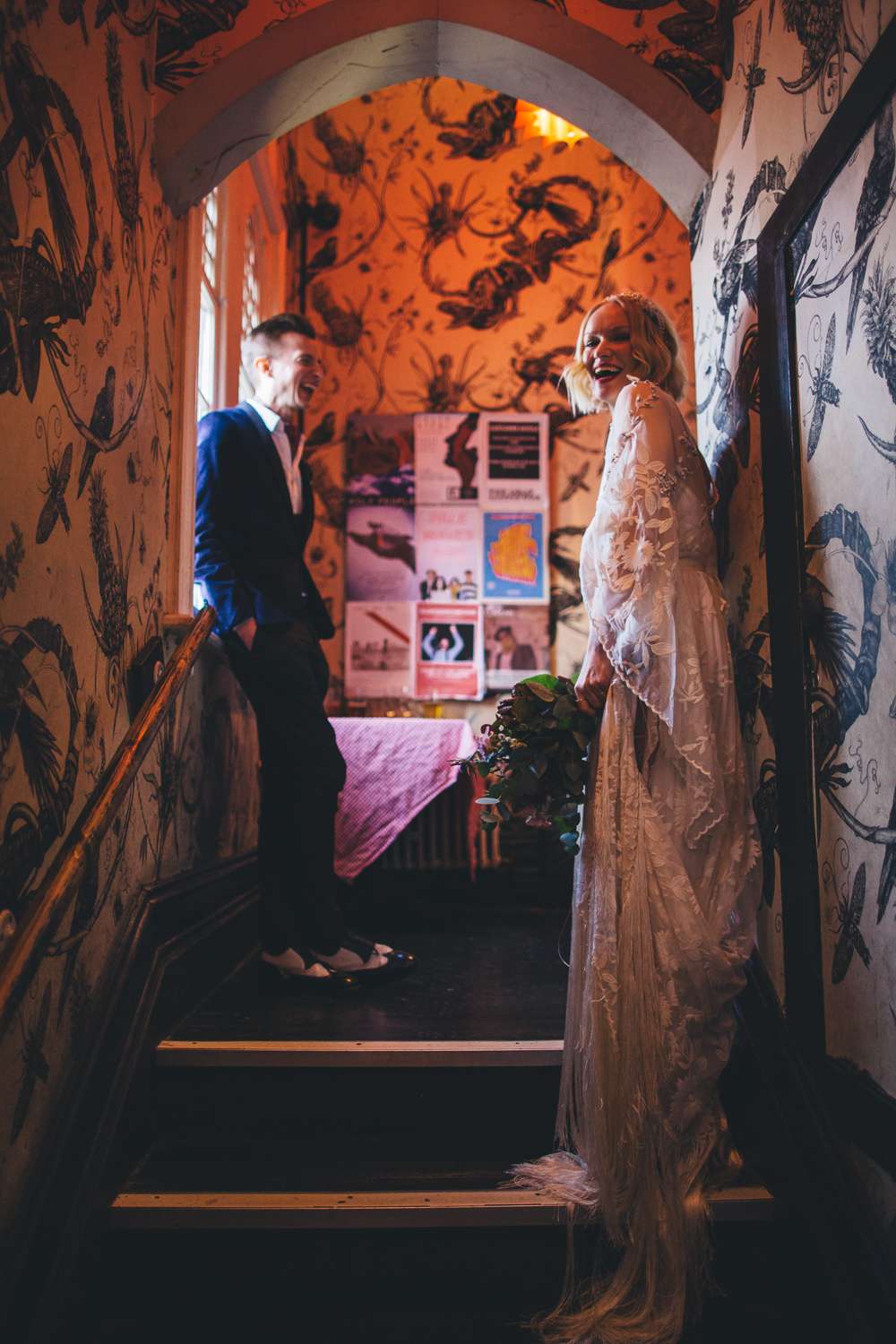 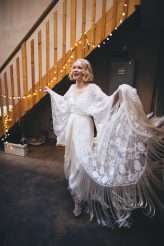 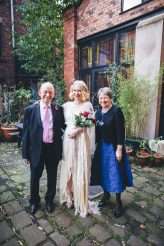 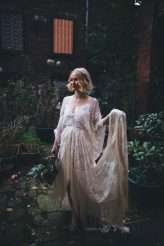 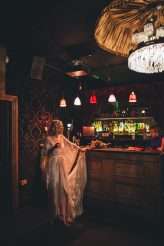 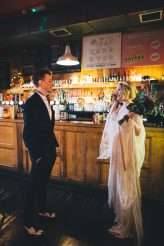 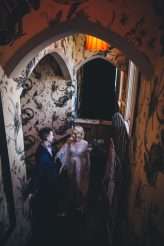 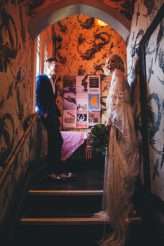 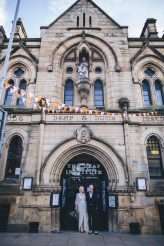 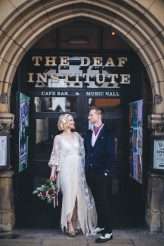 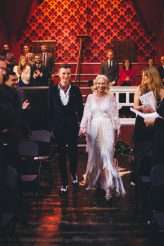 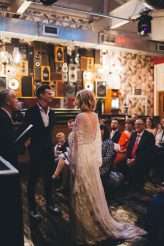 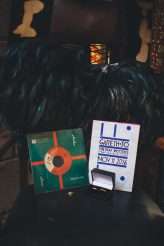 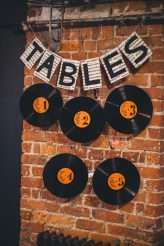 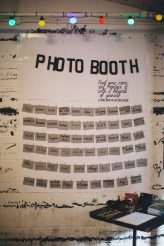 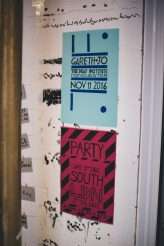 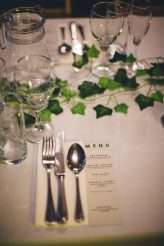 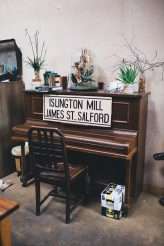 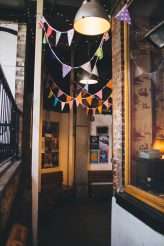 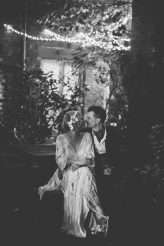 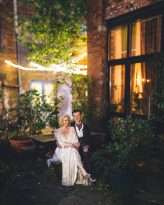 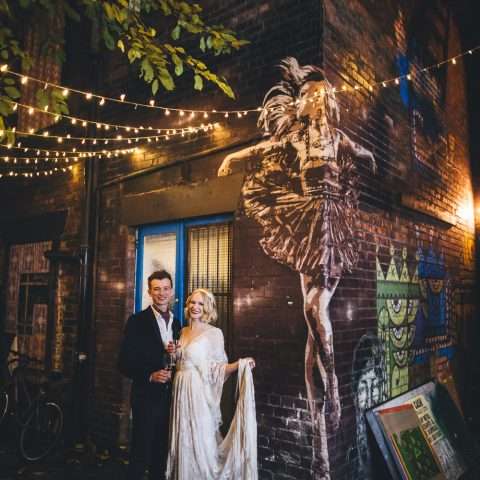