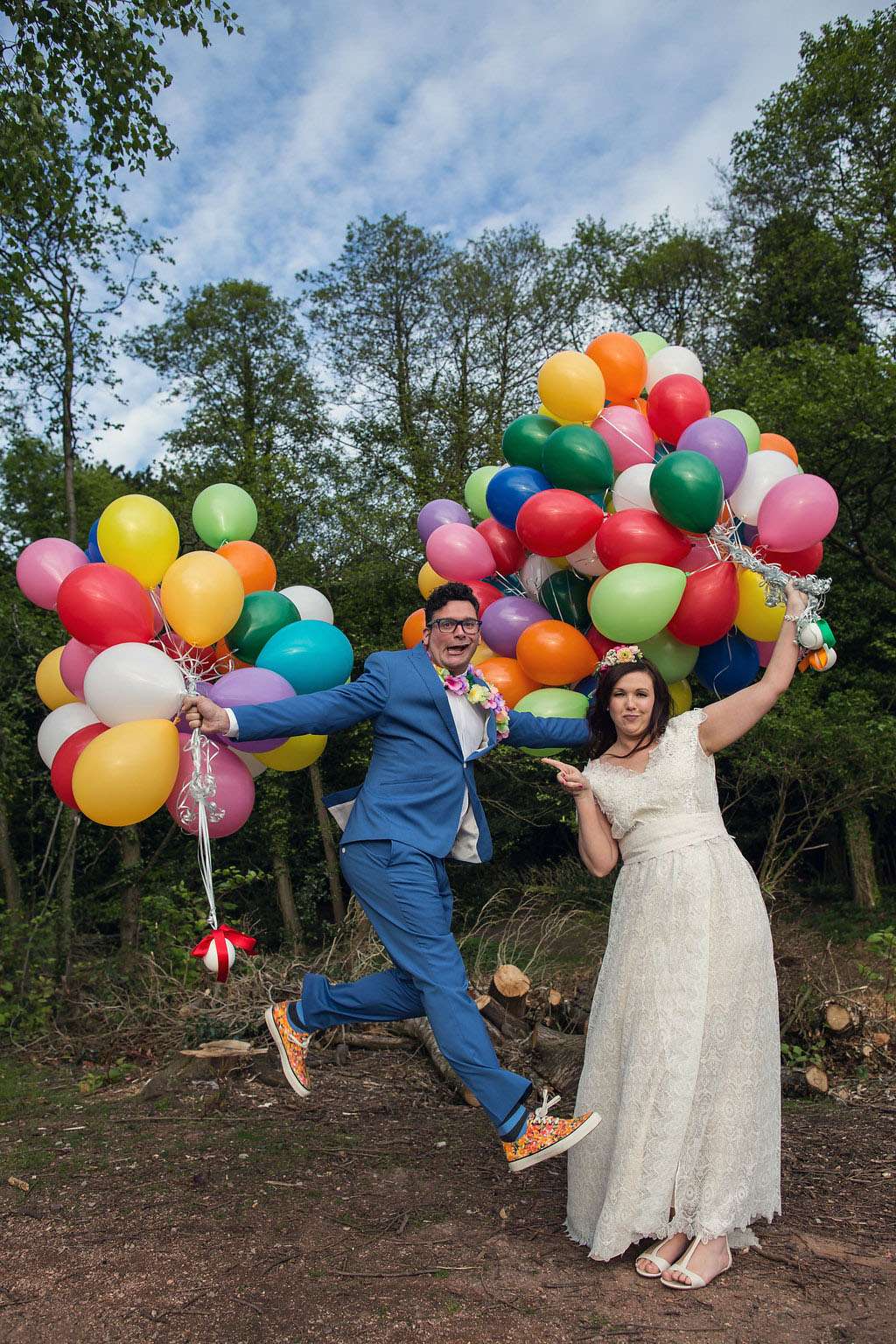 Aimee and Lenny met when they were both working in Cruise Liners in the Caribbean in the early 2000s. “It was far from love at first sight”, laughed the bride. “I used to think Lenny was a bit of an idiot! After we both left the ships we stayed (loose) friends on Facebook and in 2009 started a conversation on a photo that went like this: Aimee, ‘You look fit Lenny! You’re aging well!’ Lenny, ‘Why Thank you! No-one has ever told me I look fit before! Will you Marry me?’ From there we started messaging one another about our ‘fake’ wedding. It eventually progressed to normal conversation, then daily chat which went on for a couple of months. It soon became apparent that, bizarrely, we were falling in love over our written messages (which we cutely called ‘Love Mail’ because Lenny’s surname is Love!) So, eight years after we’d worked together, I arranged to meet up with this guy (who I used to hate) and who’s emails were giving me butterflies. It was supposed to be for one night but I ended up staying for a week. And that was that!” 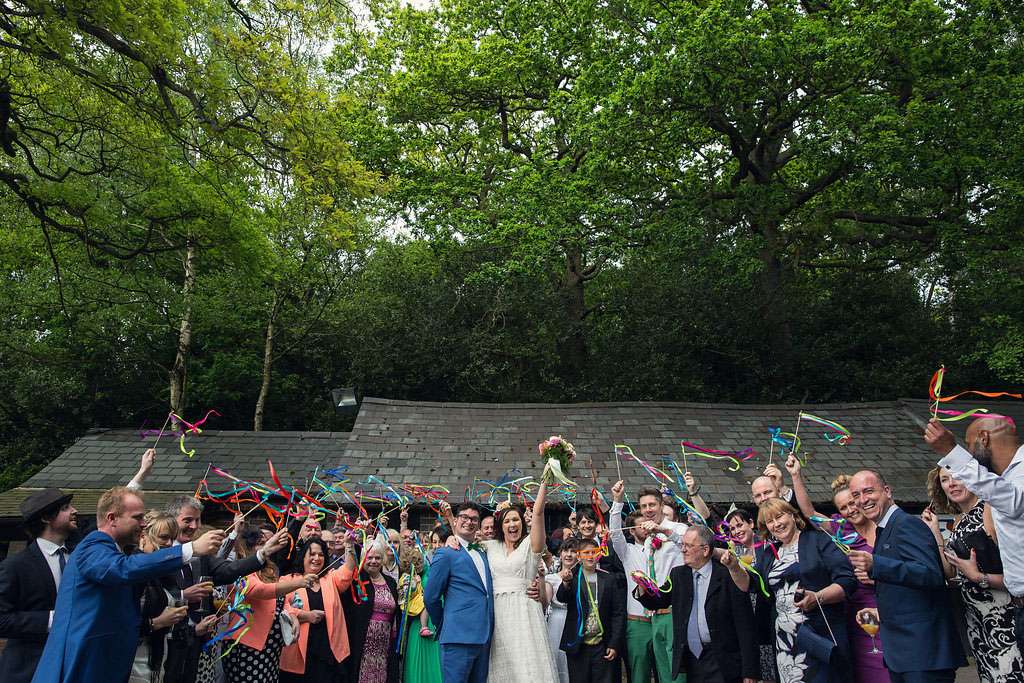 Their wedding took place in May of this year and they were inspired by their time on the cruise ships for their theme. “Initially we just wanted to have a subtle ‘nod’ to our Caribbean cruising days but as the planning went on, and not being a couple that do anything by halves, we thought sod it, lets go all out”, she continued. “It ended up being super Caribbean and mega colourful. After the ceremony we served a rum punch with floating fruit and paper umbrellas to our guests. We ate jerk chicken, with rice and peas, sweet potato and spicy salsa for the wedding breakfast. It was bloody gorgeous and our guests raved out it!” 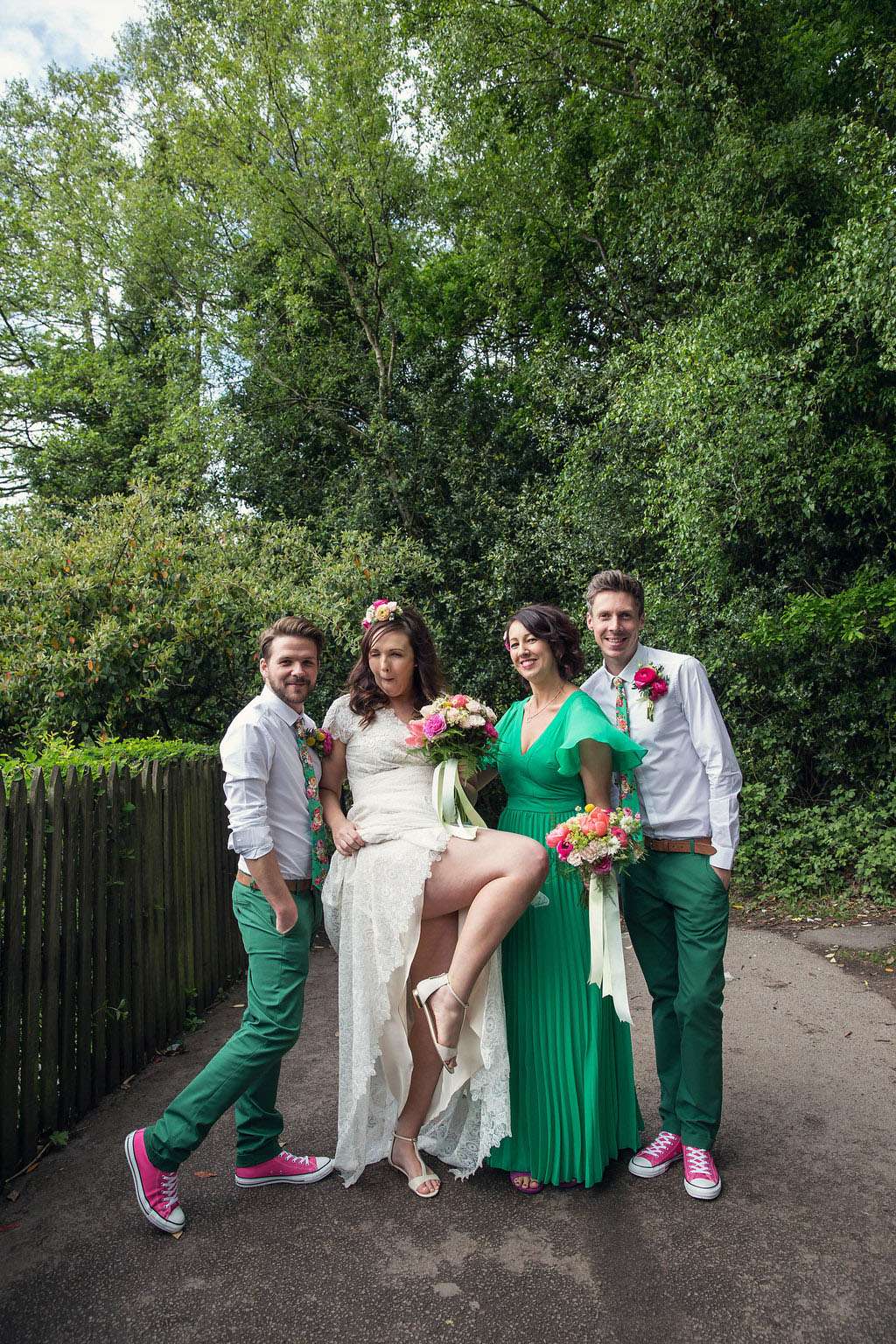 “We did the decorations ourselves. Len and I hand-painted 30 pineapples for table decorations. The pineapples were actually the very first idea I had for the wedding. They were originally all going to be gold but as the planning went on we both realised we wanted a mega colourful wedding so they ended up being painted multi-coloured. We also had 25 painted tin cans that we put our flowers in. We had a brilliant florist who did my bouquet and flower crown but to save on money the rest of the flowers were done the day before by my dear mum. She did a fantastic job.” 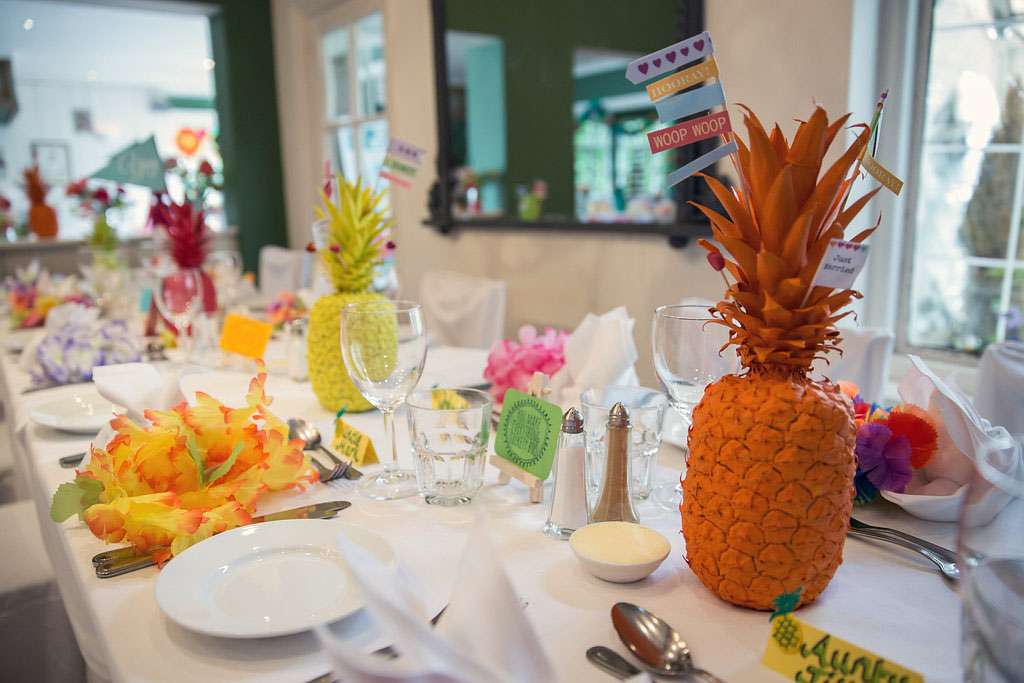 “We had a Krispy Kreme donut tower instead of a traditional cake and as wedding favours we gave everyone a flower garland which everyone wore around their necks and in their hair and it seemed to really get everyone in the party spirit! We weren’t allowed confetti at our venue so I brought some ribbon wands from an eBay seller in China and we used them for ‘the confetti shots’. They turned out great and everyone kept hold of them and danced with them on the dance floor. We also had 200 balloons. The brief I gave the balloon shop was ‘Id like them to look like the film ‘Up’.’ It was just another way of us injecting lots of colour and a fun party vibe.” 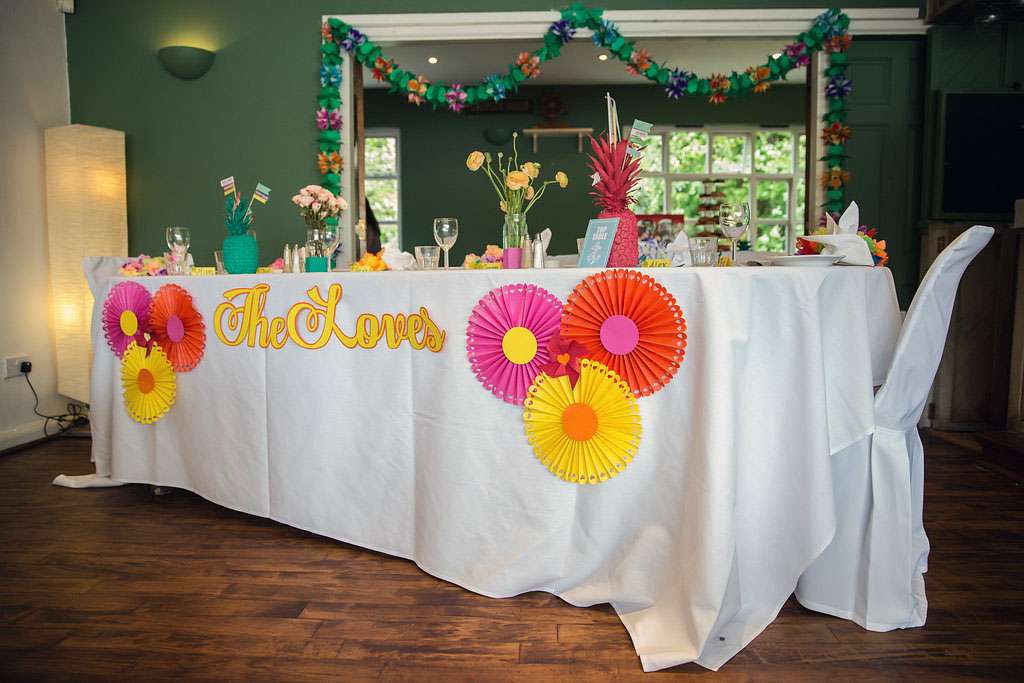 “I’ll be honest, the worst part of planning our wedding was arguing about silly things”, Aimee said. “It’s such a stressful time and, man, did we argue! The notion that the planning part is a fun process is total BS! Who are these people who lovingly do it together without a cross word? They can’t exist, surely! We rowed over the stupidest, dumbest things. Of course we laugh about it all now because arguing over Len buying the wrong ‘orange’ for the pineapple is just ridiculous!” 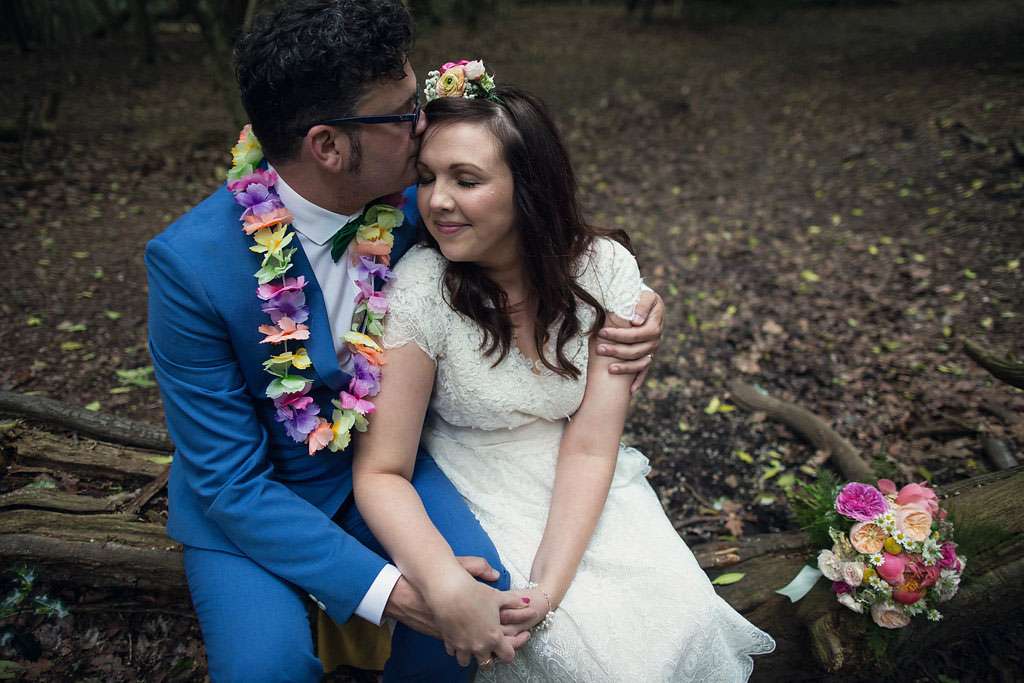 “I was also really stressed and cried and fretted about being ‘fat’ for my wedding day. It was so consuming. I cried because when I dreamt of getting married, in my head I was a svelte size 12. So when I was more like a curvy size 16 there were big problems going on in my mind that I couldn’t seem to dull down or drown out. I was worried I’d look fat in my photos and hare them all, I was worried that people would think I looked fat in my dress, I was worried I wouldn’t be able to relax on the day and that it would be ruined by my stupid self conscious thoughts… I guess I’d just like to say that if there is anyone out there feeling like this: DON’T! Don’t waste your precious energy. Why oh why didn’t I listen to my sensible, rational thinking husband-to-be who told me that it was all in my head and he thinks I’m the most beautiful girl on the planet regardless of my size? How silly am I?!? The ONLY thing that I notice in our photos now is how bloody happy I look. No-one is looking at my fat arm. Everyone is looking at my smile. It’s all about the confidence. Put that dress on and marry your man and get out of your head, because on this occasion, it’s not right! Happiness beats imperfections every time.” 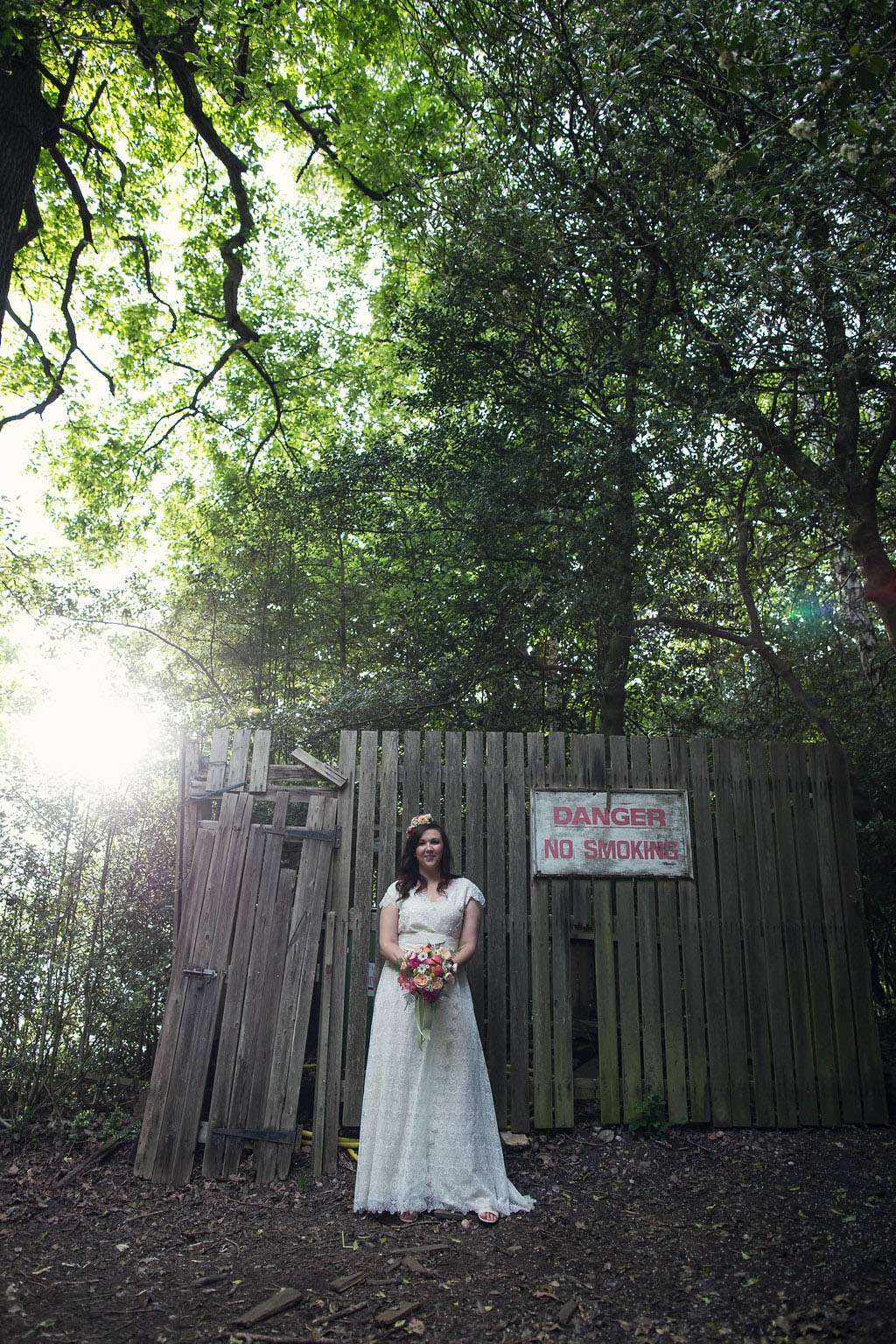 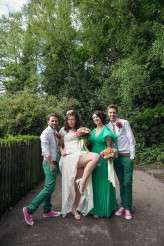 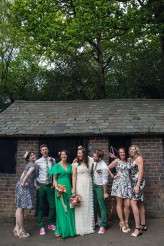 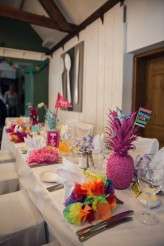 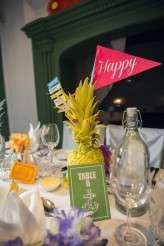 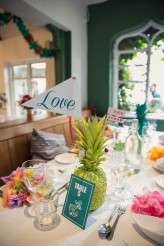 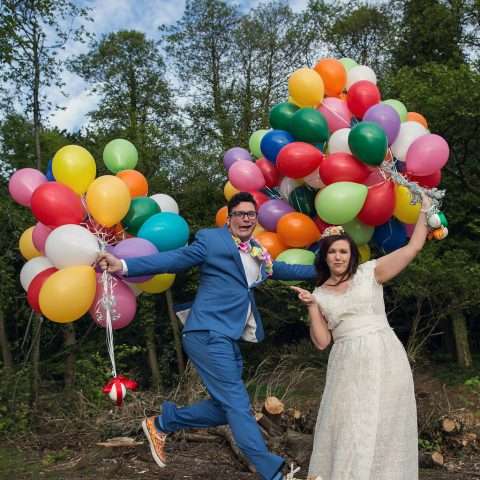 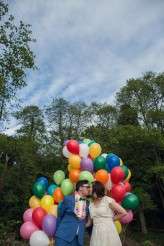 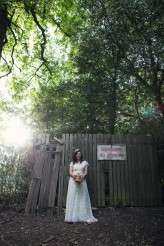 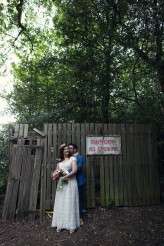