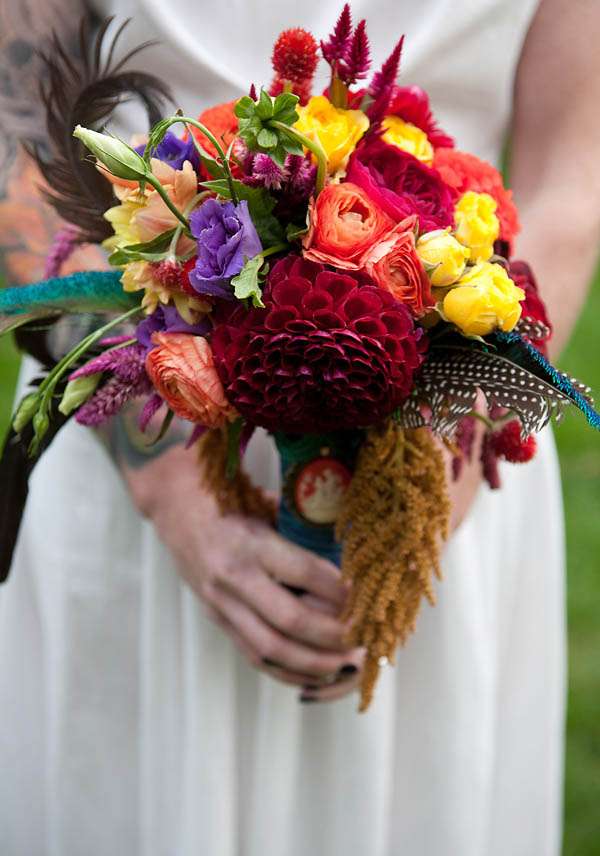 “We had the idea for a Rock n Roll themed stylized wedding shoot and one of our former client was perfect for it!” explained photographer Jessica. “MJ is a local tattoo artist and amazing painter. We set up in an apple orchard on a fall day and had a mix of vintage glass, flowers, instruments and an old radio from the 1930’s. The shoot was styled by our assistant and partner-in-crime Brooke Biette and flowers were provided by the amazing Judy Bourgeois of Flora Fauna. The bottom of the bouquet even had a record that was melted down to go around it.” 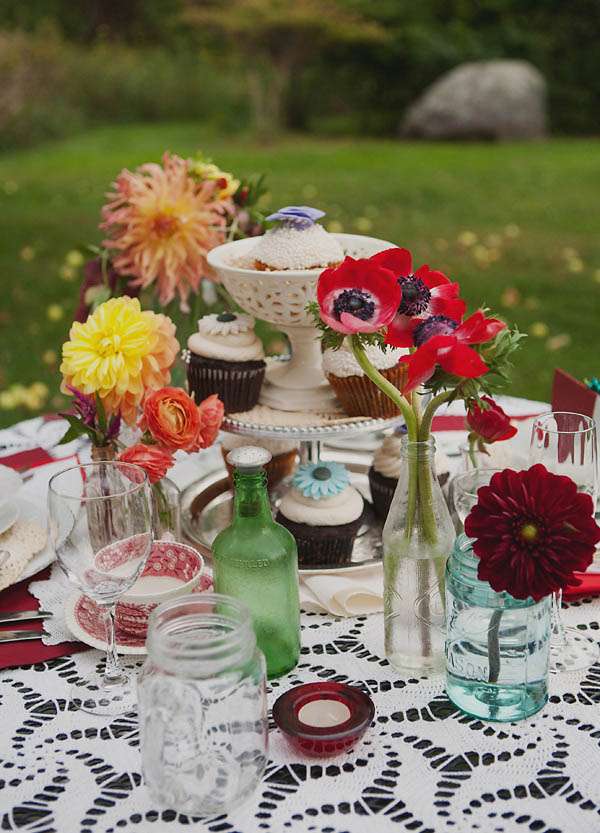 “The couple began the shoot in a vintage wedding dress and suit in the orchard and as it got darker their craziness came out and they changed into a long black dress and black tux with chain belt and red sneakers.  They were rocking the poses too!” 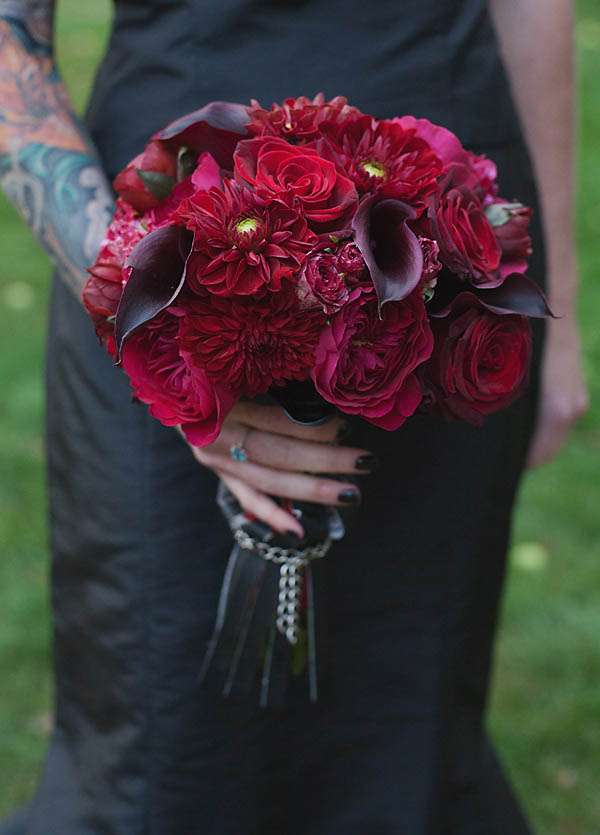 Thanks to photographer Jessica for sharing this beautiful couple and table inspiration with us today. 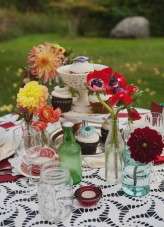 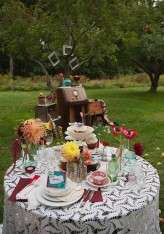 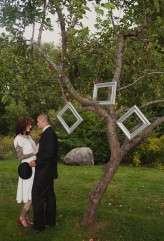 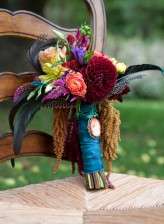 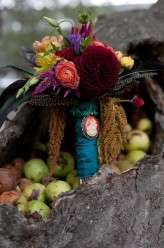 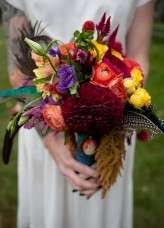 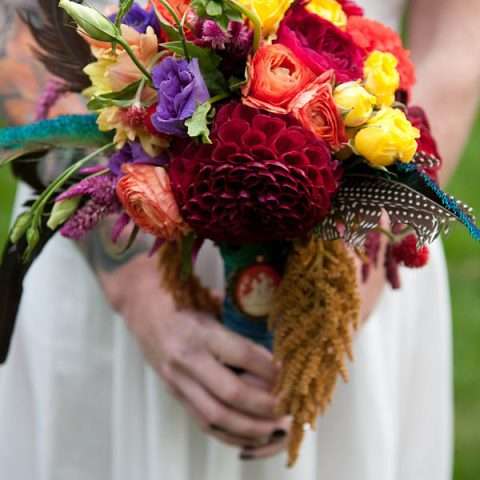 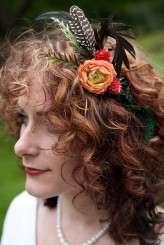 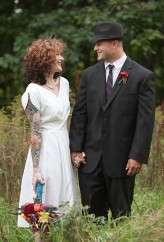 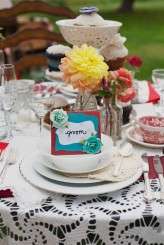 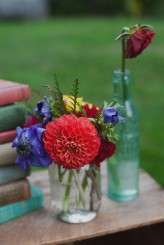 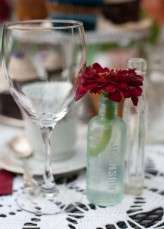 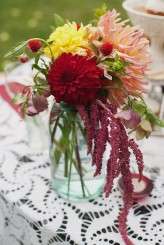 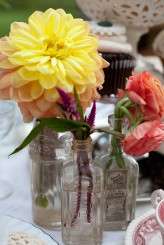 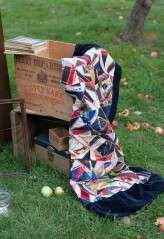 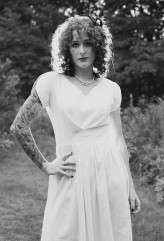 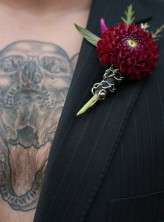 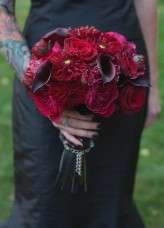 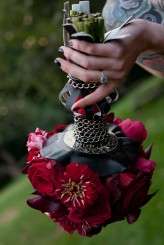 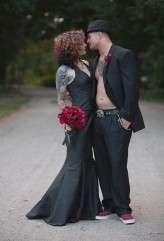 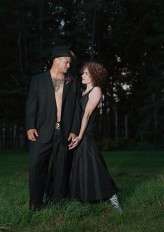 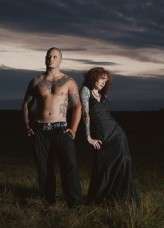 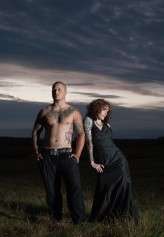 Struggling to find the kinda of clients they really wanted to work with in Yorkshire where they're based, photographer and videographer Lorna Lovecraft & Darryl Forrester decided to take matters into their own hands and show these kinds of alternative couples why they should be booking them.

If there's one thing I love to showcase on Rock n Roll Bride it's unconventional bridal styling ideas. Which is why this photo shoot really tickled my fancy.

At first glance, this is a gorgeous wedding full of all the details that Rock n Roll Bride readers go nuts for. But this is actually a styled shoot! And it has a beautiful story behind it... Vanessa ('Vanny') and Martin are very close friends of photographers Anna and Johannes. When they were all children, Anna's little sister brought her friend Vanny home from school. Vanny's father had died of cancer and her mum had a new boyfriend and so was almost never home. Vanny was mostly living off pizza and soft drinks, said Anna. "Since my family is very sociable (and crazy), we kind of adopted Vanny and so she spent a lot of time with us during those years, and we went through a lot together. Johannes and I had a styled shoot planned, and we asked Vanny and her boyfriend Martin to be the models. What they didn't tell us was that not only they were freshly engaged, but they were also expecting a baby! Our shoot then turned out to be half styled and half real wedding, with me doing a speech in church, everybody crying, and our friends playing the parts of the bridal party!"