Follwing the popularlity of the 80’s themed engagement shoot I featured on Tuesday, I wanted to share Emma & Micheal’s cabin crew themed session sent over by the wonderful Julia Boggio (who also shot my Vintage Boudoir session.)

When Emma told Julia her idea about doing her pre-wedding shoot in the Virgin Atlantic rig, she jumped at the chance! “After all, Daniel Craig had been filmed in the rig for one of the Bond films and where Daniel goes, well, I go.” Julia told me. With Emma living in the UK and Micheal in the US, Virgin Atlantic played a huge role in their relationship so far – ferrying them both back and forth across the pond. “Emma contacted Virgin about her idea and they were more than happy to oblige. ” Julia continued “They love a good love story! The Virgin Atlantic rig, or Miss Rigorous, as she is named, is used mostly for training purposes at VA. It’s an entire interior of a Virgin plane. Because the rig is quite dark and the lighting is suitable for an airplane, not a photo shoot, I had to come to the party equipped with loads of Broncolor lighting, colour gels, and an assistant. Emma rented an old style hostess outfit and Michael played the role of lusty Business Class passenger. We had a great deal of fun and I’m really looking forward to their wedding later this summer.” 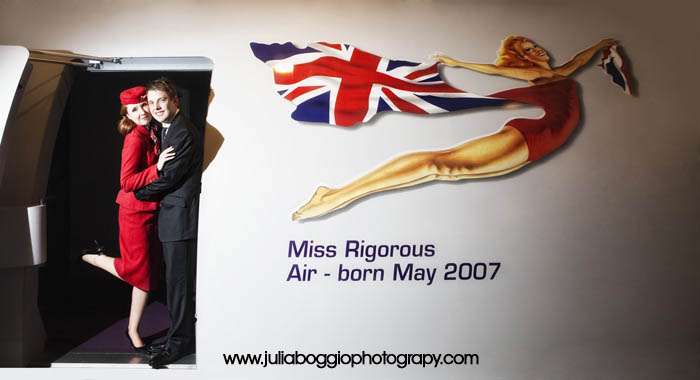 Thanks to Julia for sharing this fun shoot with us today 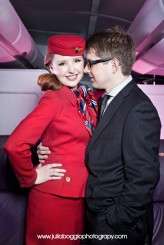 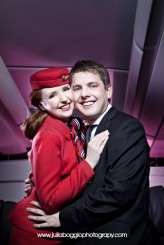 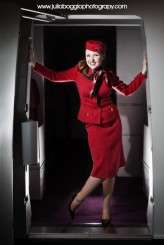