Rebecca & John’s summer wedding was so eclectic, so English and just so fabulously unique that I couldn’t wait to share it with you. Rebecca told me all about their ideas and inspiration behind their amazing day, so I’m just going to hand over to her for this one!

John didn’t want to get married in a church, as he is not religious so I had my heart set on getting married outside, because we felt there was a more powerful spirituality in the earth and nature that would bring us together with more meaning than just a civil ceremony. Almost a pagan idea I guess… The marriage scene at the end of Robin Hood Prince of thieves was a major inspiration!

We got married at Hedingham Castle, an 11th century fort in Essex, England. The castle were quite strict in what we could do so we put most of our effort into making the reception at Belchamp St Paul Community Hall, Suffolk, our own. We had said the ‘theme’ of the wedding would be ‘vintage inspired –from the 20s to the 50s’ on the invitation,  mainly because I love the fashions, music, style and glamour of those eras – but I suppose starting the proceedings in a Medieval castle fit in with ‘vintage as well.’

We felt it was really important that throughout the day everything should reflect who we were, rather than conforming to any idea of how weddings should be, Our whole wedding ethos was that it showed our personalities, as it was  day about us after all! and you don’t get a chance to do that again… many traditions stand the test of time because they are lovely traditions such as the cake, the rings and getting dressed up etc, but we didn’t want it to be a generic cookie cutter wedding – and many people said that it showed, it couldn’t have been anyone else’s wedding! 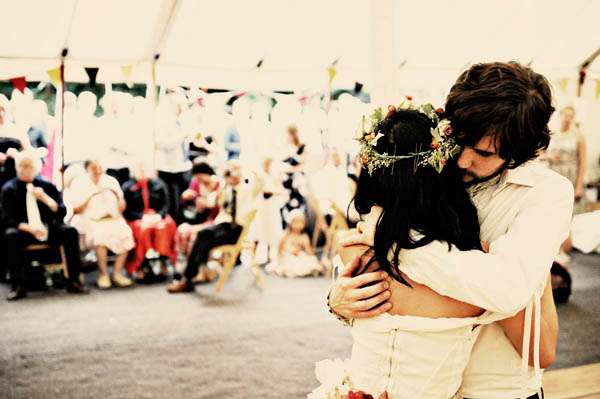 I had two dresses! One to cater for the whole woodland maiden fantasy aspect and one to party in, in the evening, that catered to my love of the 50s!

So for in the day, I went looking for a simple, floaty peasant type dress that would be a woodland nymph/Tess of the D’Urbervilles type thing! I pretty much knew I wouldn’t be able to get that from an actual wedding shop so went to a vintage clothes fair held regularly at Chelsea town hall called Frock Me. I saw the dress at a stand by a lovely lady called Flick, who has been involved in some of the Wedding and other wedding magazines fashion shoots, and knew it was the one. My mum said she knew it was the one because I went really quiet when I put it on! It was £150, so pretty much a bargain for a wedding dress.

In the evening I wore a silk white 50’s halter neck, swing/prom style dress from Vivien of Holloway in Kentishtown, an amazing 50s and rockabilly clothing place which is above a motorbike workshop! With two red petticoats underneath to give it that swooshy look, with red peep toe shoes from Zara and red gloves from eBay. I had a red heart with John’s name in also sewed into the bum! And vintage hat/head piece with a veil from a shop on Brick Lane.

Rebecca loved styling her wedding so much she set up her own vintage styling company supplying the things she loves to other brides and grooms to be. Check out her company A Most Curious Party for more info and vintage loveliness to inspire you.

Thanks to Rebecca, John and Ian for sharing this wonderful wedding with us today. 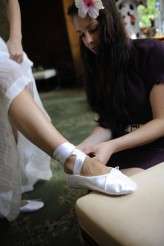 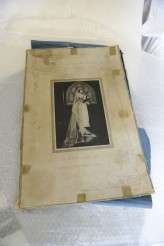 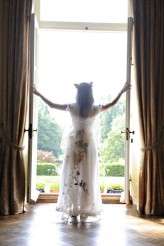 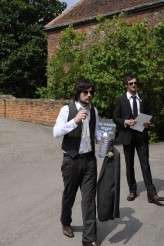 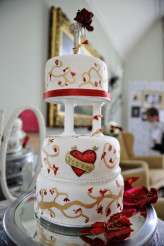 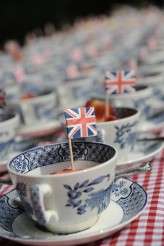 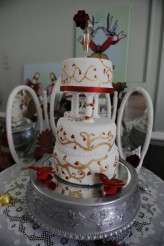 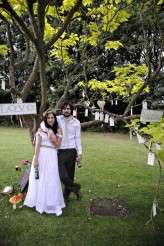 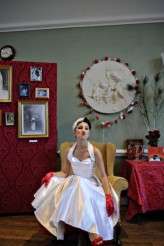