This hippy chic, picnic stylee wedding with a woodstock vibe is nothing short of phenomenal. Finding amazing hidden gems like this has got to be one of my favourite things to do. I feel as though I have unearthed a complete treasure.

Forget everything you think you know about weddings. This celebration makes all that seem futile. Can you imagine being there? Cramming into a tiny tent, siting on your friends laps or on the floor just to see your best friend’s get married. She’s wearing a stunning vintage gown (which the little girls all clearly adore!) and he’s wearing a fabulously retro velvet suit. And the car…and the swing…and the random panda head…oooh oooh oooooh! 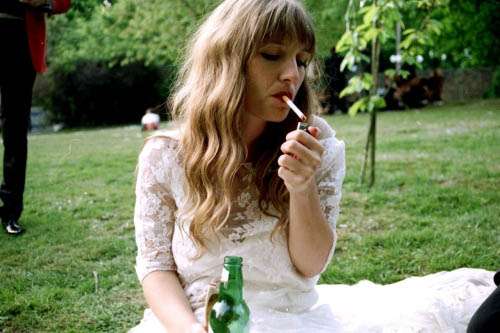 ps this is certainly my largest picture post ever…51 photographs in total, but slimming them down any further would have been a terrible crime. 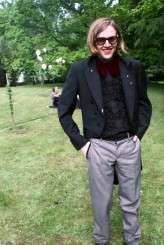 Mark and Chai both love everything about the 1970s, so it was clear that this had to be their wedding theme. They were married in Manilla in March. "Our wedding was a DIY 70s hippie-themed day", began the bride. "We jokingly called it 'hippy ever after'! We love all the elements of the 70s: the music, colours, vibe, and art, and having all these in our wedding made it very unique, unpretentious, and very ‘us’. Both of us wish we were born in the 70s and our wedding actualised that dream!"

Natasha and Shaun's wedding had a vintage 60s and 70s theme to reflect their love of retro fashion, music and style. They're both obsessed with The Beatles so that had a big influence too.