You were right Amanda…these most defiantly are right up my street!  I don’t know the proper technical term for it (maybe one of you photographic genius’ could help me out so I don’t feel like such a dummy!?) but I am loving the overall tone and hues used in all these images and they have an almost serene feel to them because of it. I guess I can’t explain it very well, but what I’m trying to say is that these are just so so so beautiful and I like them a lot! 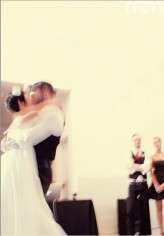 Remember Keith & Rachel's screamingly (yes I did just make that word up) awesome engagement session? well oh oh oh here comes the wedding! Yeeeeey...baby I love them - the dress, the tattoos, the succulents, the lanterns, the location (they got married under the same tree that they had their engagement shoot at), the cupcakes and the simple and beautiful yellow flower in her hair. Yes, I think I'm pretty much crazy about these! Thanks to the ever delightful Corin for sending these over and to Keith & Rachel for being just way too cool Credit: Corin Jones Photography