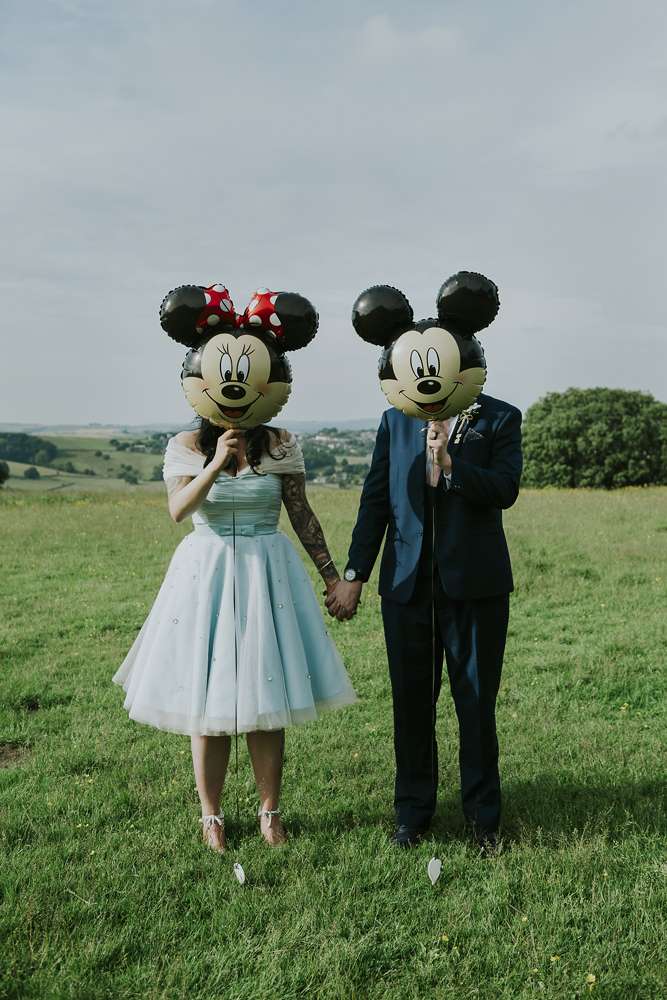 I’m not going to lie, I have a bit of a soft spot for Disney weddings and I’m pretty sure you’re all going to love this just as much as I do! That cake, the Mickey and Minnie balloons, the perfectly executed themed tables and, of course, the bride’s Cinderella shoes… I mean, there’s just SO much to love! 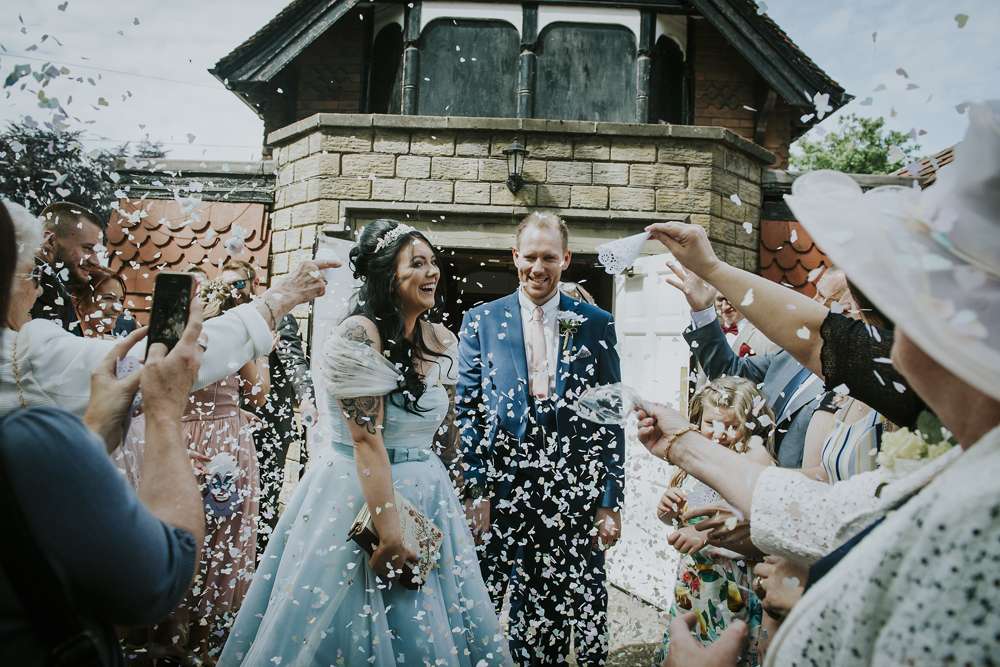 Shaun proposed to Roxie at Disneyland Paris (where else!?) and almost immediately she set about planning their dream day. “Shaun asked me in the Magic Kingdom during the Wishes (the fireworks and projection on the castle that happens at the end of every day)”, she explained. “He had taken the time to watch the show on YouTube beforehand so he could pick the right moment. He went with the part when When You Wish Upon a Star started to play and it just had me in tears. I was so happy and that song will forever mean a lot to me. This is why I walked down the aisle to it.” 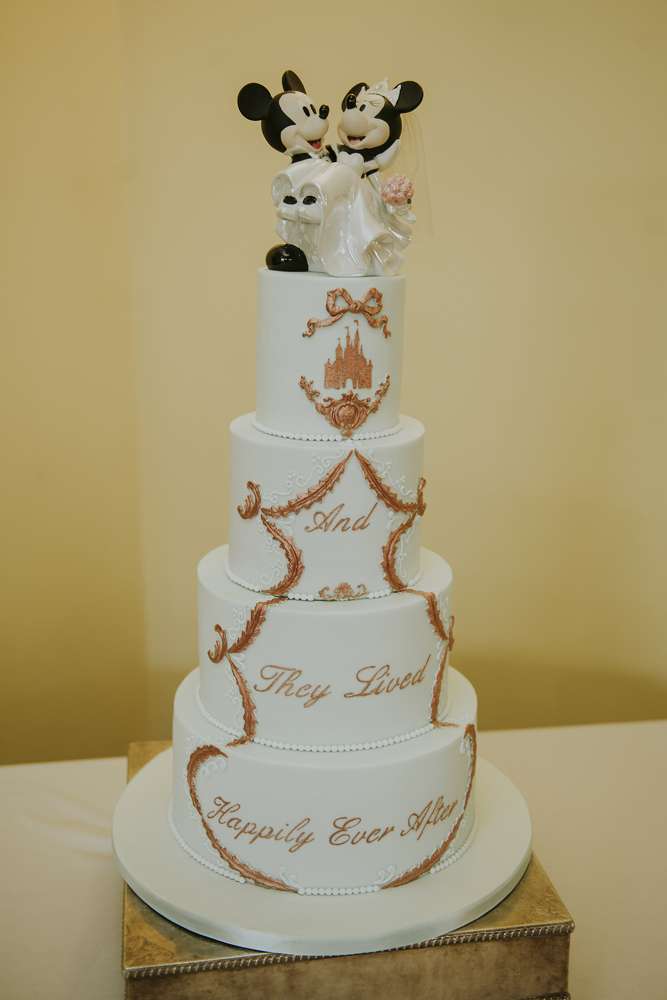 They were married in June at The Lantern Theatre in Sheffield with their reception afterwards at The Norfolk Arms in Ringinglow, “I sourced all the reception props myself – decor doesn’t have to be expensive to be effective! We bought lots of cheap items such as paper bunting from B&M Home Bargains. We had flower garlands twisted together with fairy lights across some of the wooden beams. The garlands came from eBay and the lights were battery powered ones from Primark. The balloons were also all from eBay.” 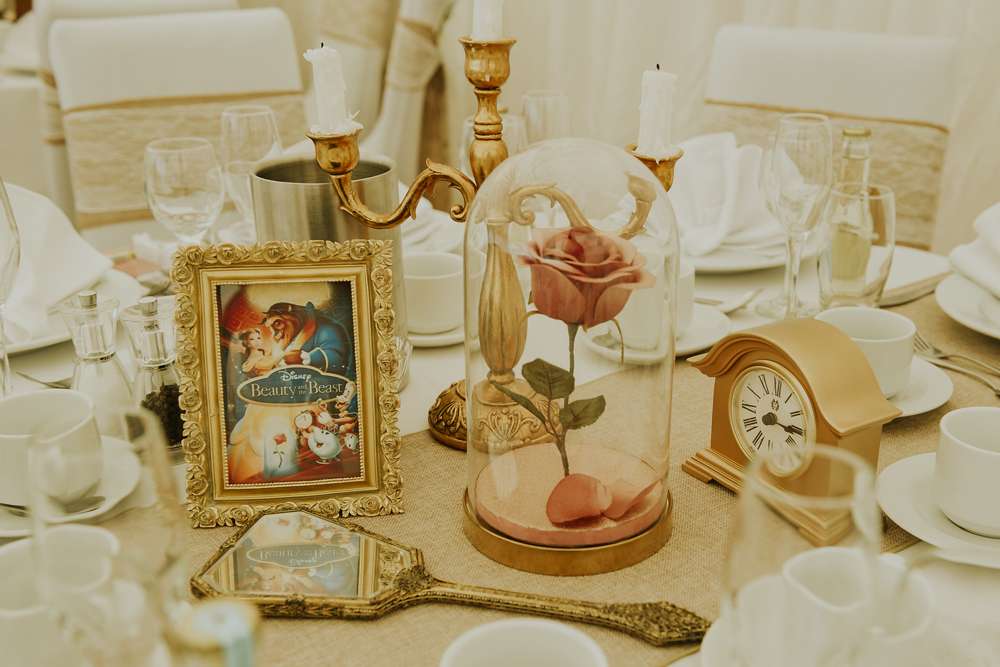 “The centrepieces for each table took quite a while to source as each table was different. I didn’t want any characters on the tables but I wanted each to look like it had come from a live action Disney movie. I spent about a year collecting pieces, I had a vision for each one and I just had to wait until I came across the right items. I went to antique markets, vintage fairs, car boots, eBay and charity shops.” 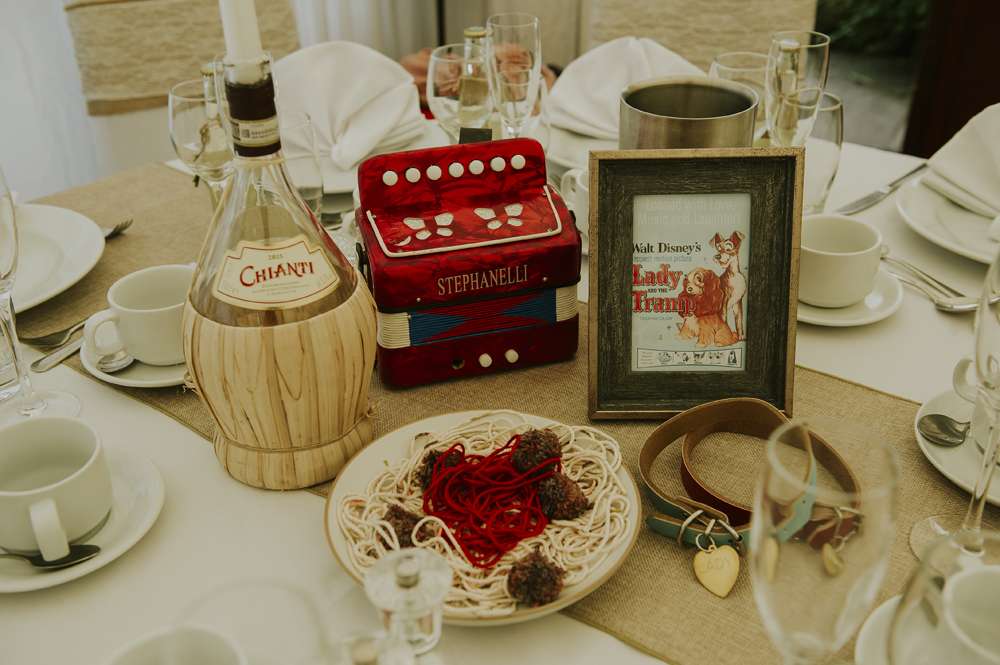 The bride’s stunning Disney Princess-esque dress was custom made for her by Esther at Frock, based in Nottingham, and it came in under budget at £600! Her shoes were from Betsey Johnson and her tiara was Alan Hannah. “Originally I wasn’t going to have a tiara or anything in my hair, but after a hair trial that I wasn’t happy with (this is what happens when you take in a picture of Michelle Keegan and expect to leave looking like Michelle Keegan). One of my bridesmaids convinced me I should get one, she was right and I’m so glad I did! What Disney princess doesn’t have a tiara on her big day? I instantly felt perfect. I also had a few pieces of jewellery on on the day – a castle necklace Shaun had bought me on a previous trip to Disneyland Paris and a Disney Couture bracelet Shaun bought me as a wedding gift that matched the rose gold colour of my engagement ring.” 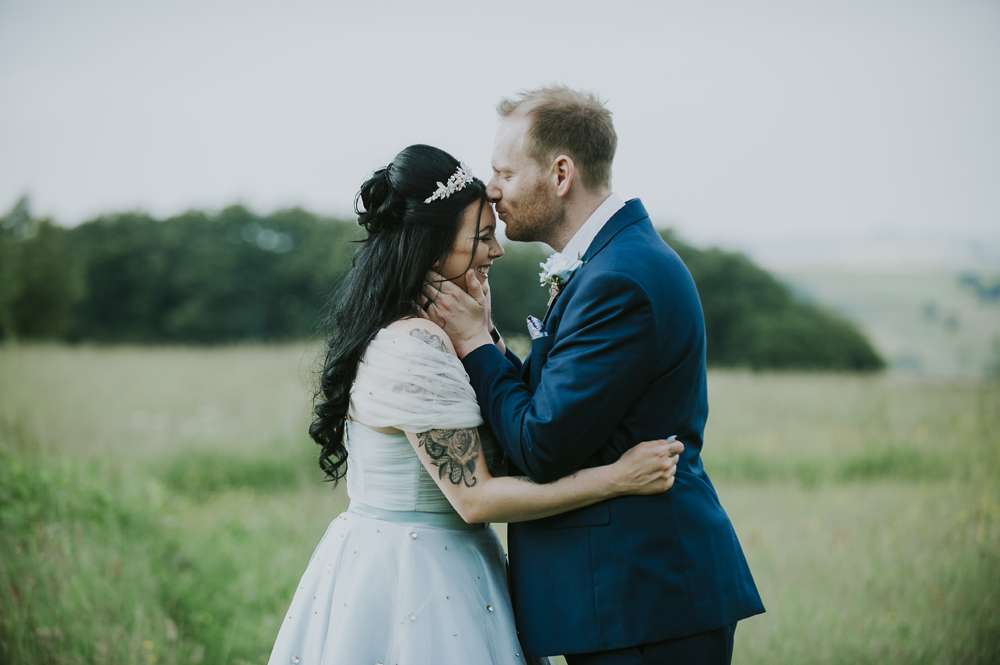 They decided to forgo the tradition of flowers, instead creating their unique table centrepieces based on different Disney films. The bride and her bridesmaids carried Disney themed handbags from Danielle Nicole instead of bouquets! The bridesmaids also each had a pair of Minnie ears that were made by Luby & Lola on Etsy.” 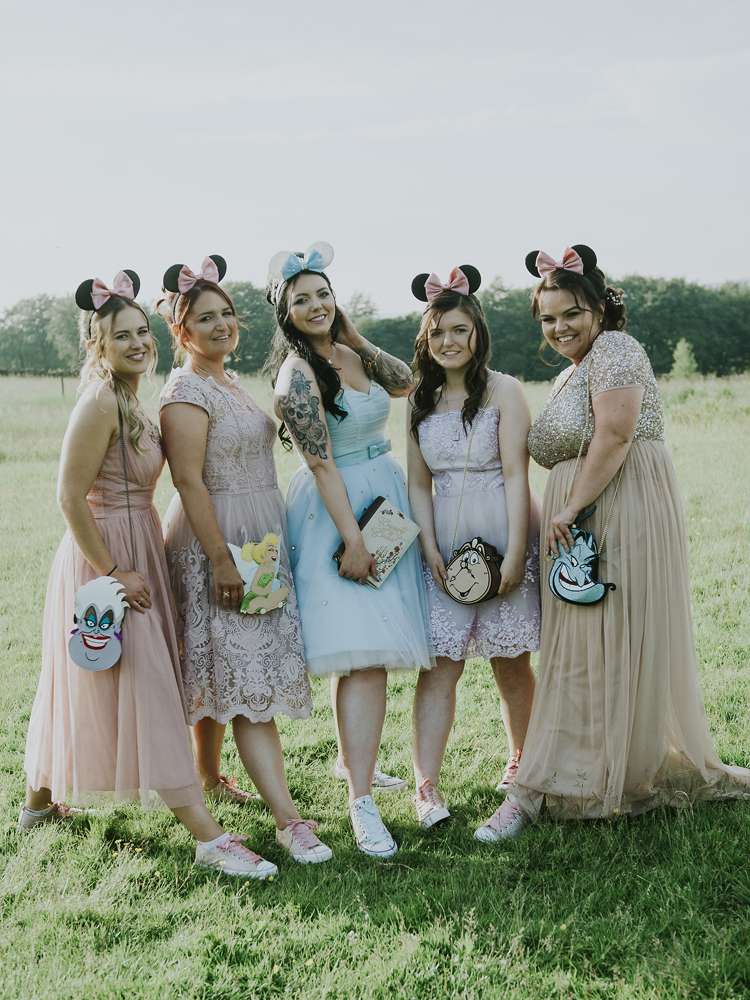 “I absolutely loved planning our wedding and I think the best thing about it was making everyone really proud”, she concluded. “People kept going up to my mum on the day and saying how much of a wonderful job she had done (she’s the creative one), but she had to keep saying that she had played no part in the day whatsoever and it was all me. I was so happy that I had managed to pull off such a day that I loved. When you first start planning it really is daunting because you’re faced with so much stuff, but there really is no wrong or right way to plan a wedding. I still to this day don’t understand what a PA system is and I had that thrown at me so many times by different venues but I assume we had one somewhere! I loved how many people came together for us both on the day and seeing both families together and everyone so happy was just perfect.” 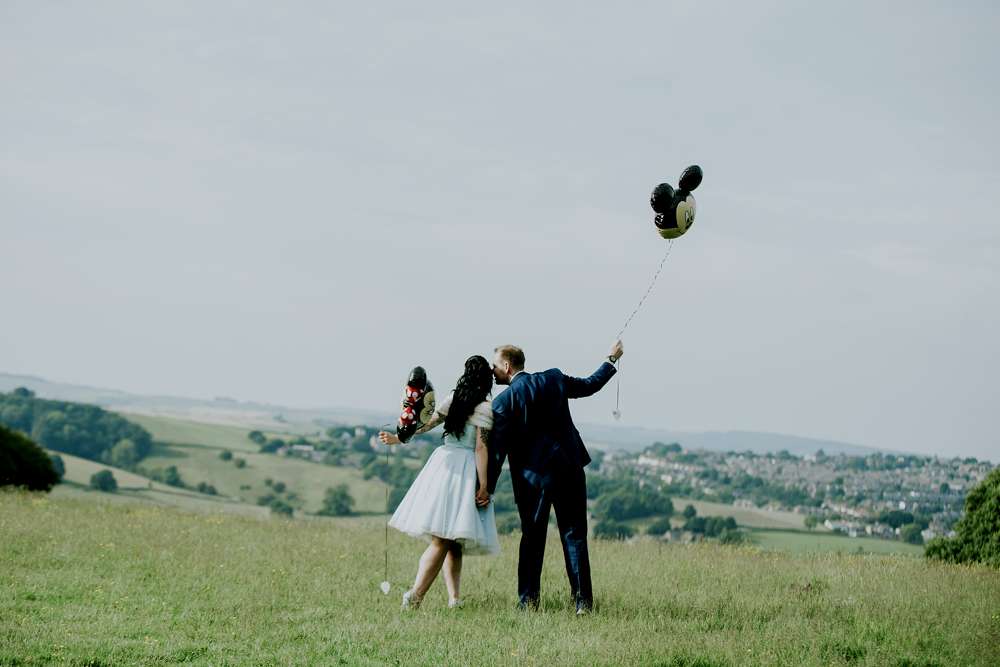 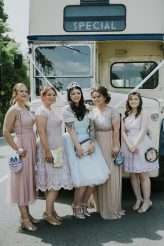 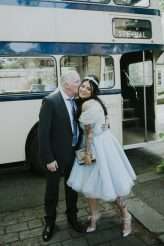 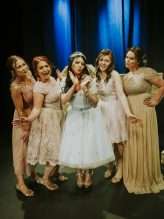 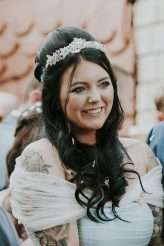 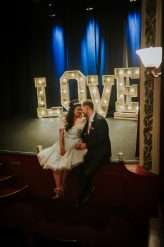 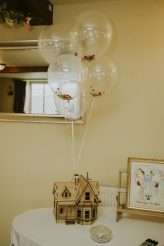 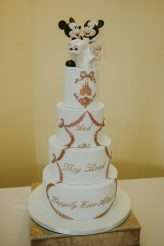 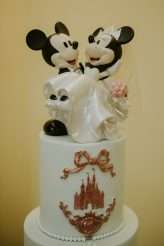 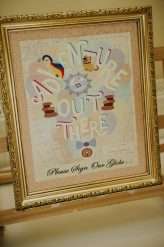 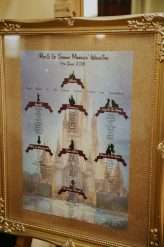 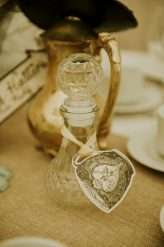 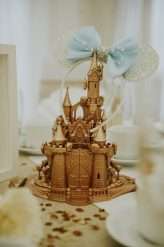 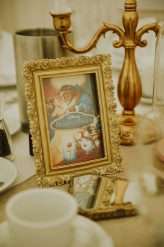 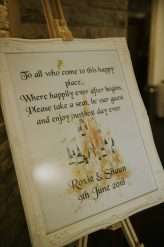 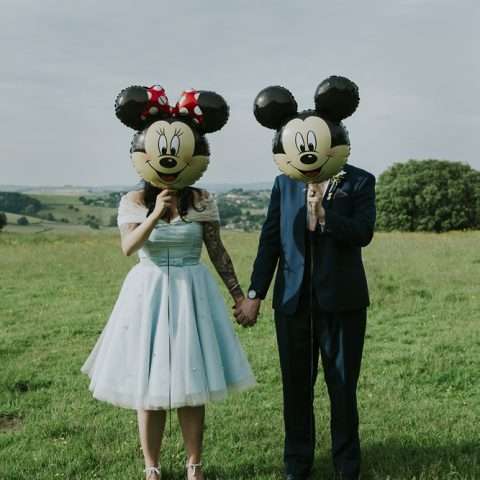 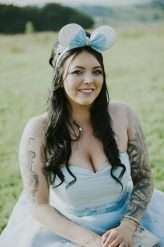 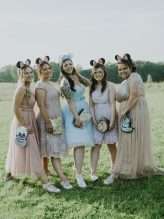 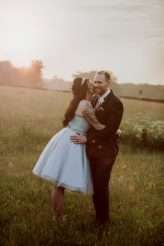 This Fairytale Wedding Gives Us All the Disney Feels

This fairytale wedding has to have some of the sweetest Disney inspired touches we've ever seen. From the centrepieces (each table was named after a movie and the props on the tables matched), the Disney inspired temporary tattoo and wall hanging favours and the subtle Disney inspired cake (those colours are just perfect!) complete with a with a glitter ‘to infinity and beyond’ topper.

“Up” Inspired Portuguese Wedding with 3000 Balloons!