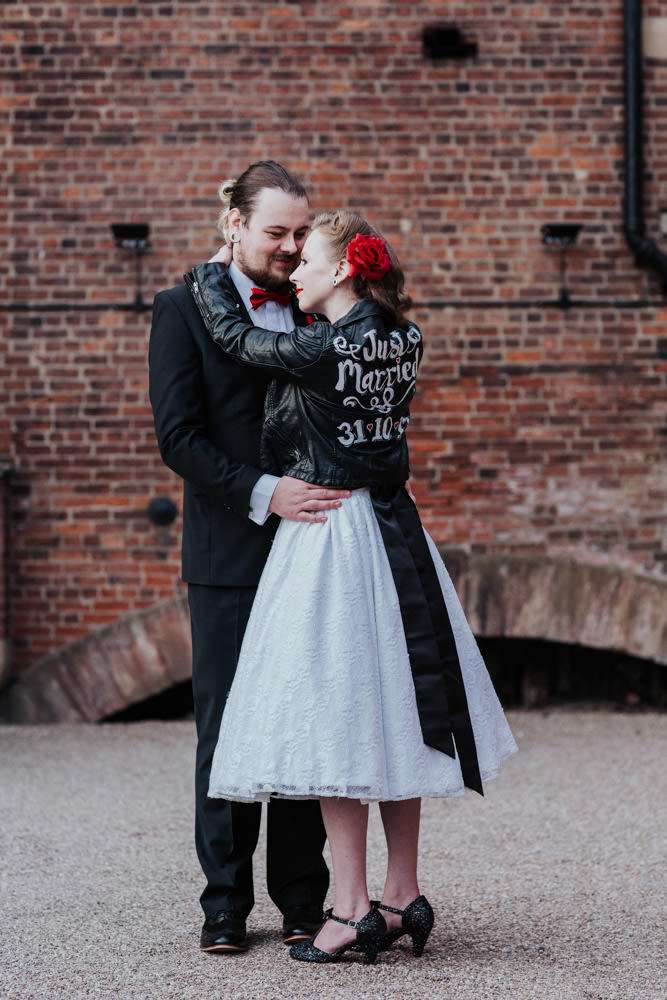 Choosing 31st October as their wedding date, Lauren and Galen opted for a spooky Halloween theme. With a £10,000 budget they planned a wedding that was quirky, creative and a hell of a lot of fun. They had hints of the 1950s and rockabilly too.

“Our wedding was It was a bit of a mish-mash of industrial vintage (particularly with the venue we chose) mixed in with 50s rockabilly and a bit gothic”, said the bride. “We wanted to squeeze both of our broad interests in there somewhere! Our main inspiration was Halloween. It has always been my favourite day of the year, so having it on this particular day was always something I had in mind. It suited the style we wanted completely so I was overjoyed the venue had this date available!” 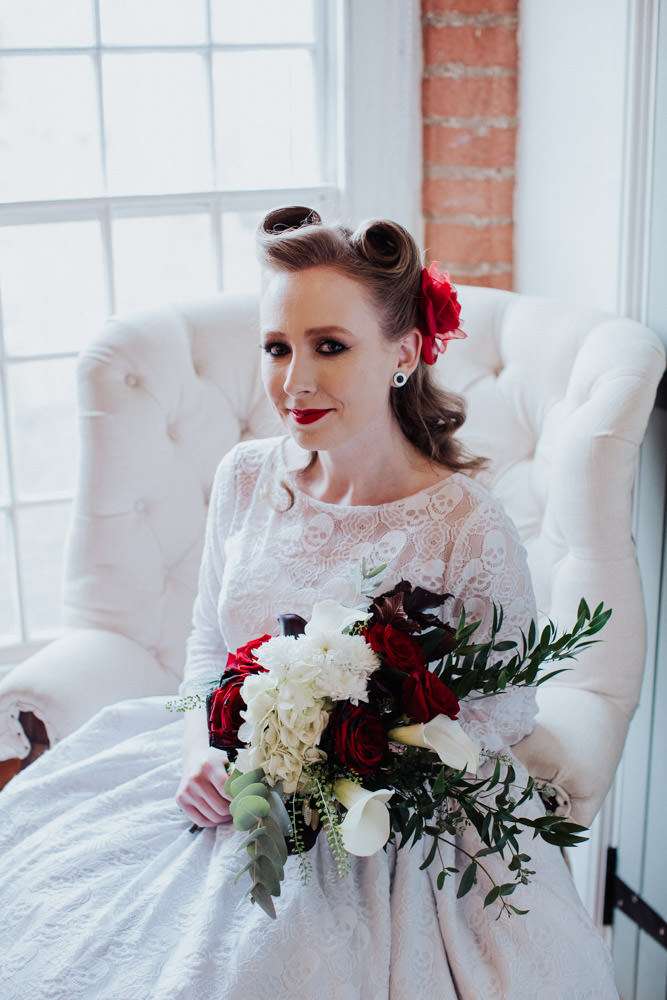 The day started with a small, intimate ceremony with just 45 guests. They decorated the ceremony room with lanterns running down the aisle and mini white squashes and flower-filled pumpkins scattered the room. “We kept a lot of traditional elements of a wedding and just gave them our own gothic, Halloween twist. We didn’t want to go too crazy but did want it to be different enough for people to talk about the day and remember it. I was very nervous before the ceremony but once my father had walked me up the aisle, I was absolutely fine!” 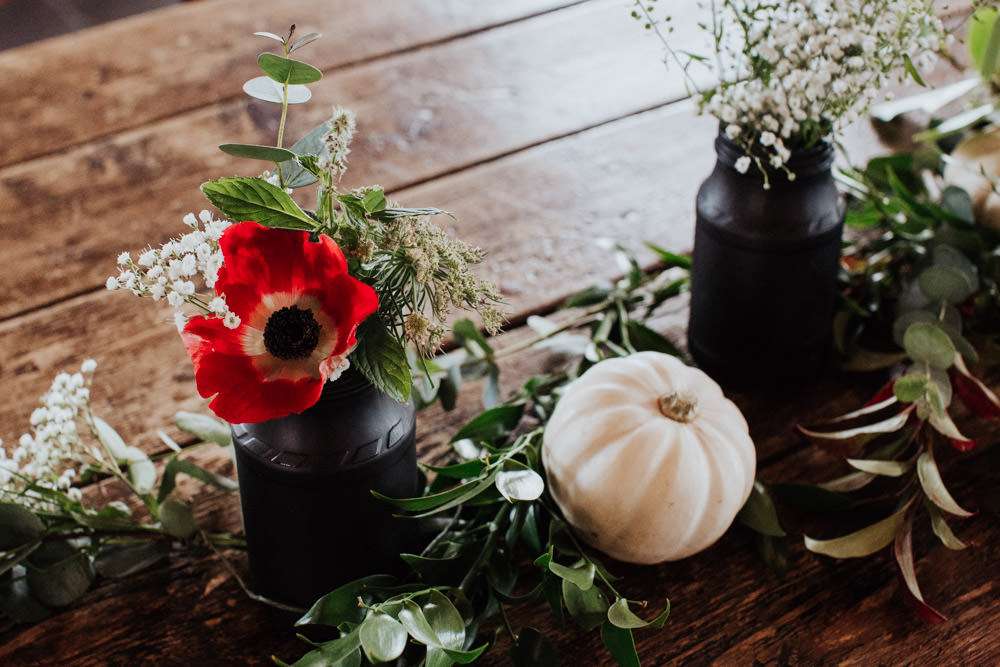 They were married in Derby at The West Mill, a really cool space with the industrial vibe they wanted. “The venue already had loads if amazing props, including lots of vintage churns and typewriters etc”, Lauren continued. “We just added our own twist with lots of skulls, flower filled pumpkins and other Halloween themed paraphernalia.” 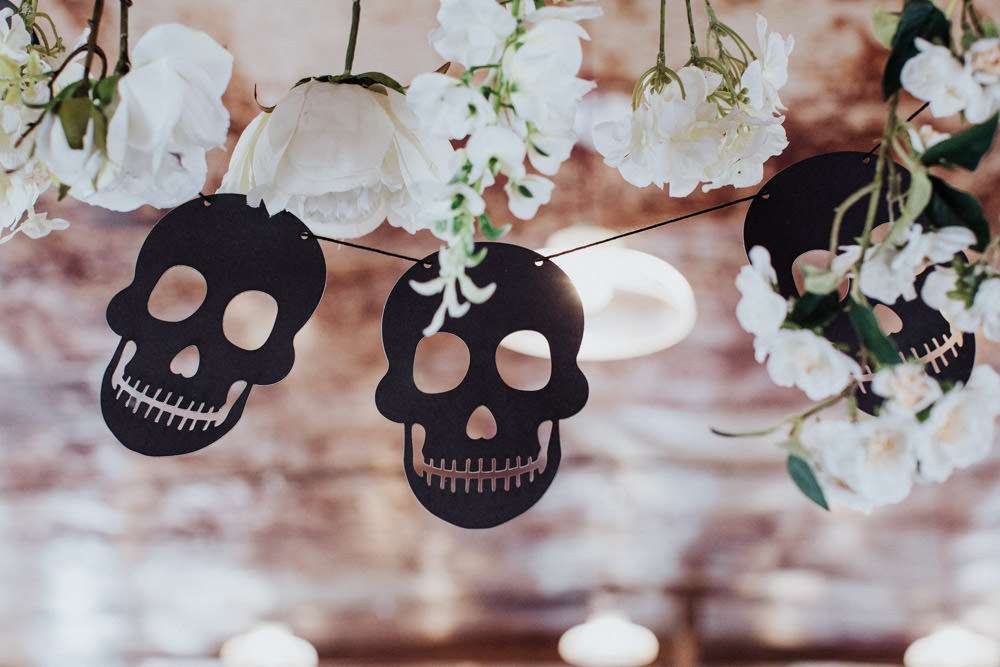 Lauren said one of the hardest bits about wedding planning was knowing where to start and the best order to do things. “After the venue was booked I had no idea what came next, I think we did everything in the wrong order!” she laughed. “At times it was very stressful but we pulled it off in the end! Also sticking to the budget was hard. We had a strict £10,000 budget and we did it almost bang on. If you’re strict with yourself but make sure you have all the bits that are important to you, you can’t go wrong, although it is very easy to start getting carried away with every little thing you think you might need!” 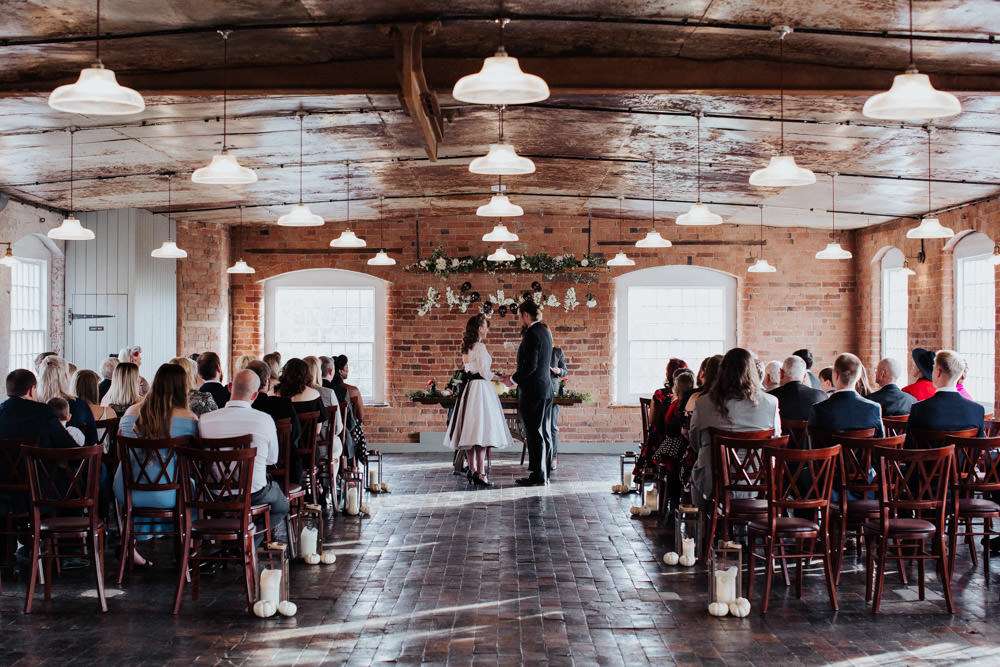 Lauren’s amazing dress was made from lace with skulls in it by Honeypie Boutique. Her shoes came from Schuh and her heart-shaped bag was by Dr Martens. One of her favourite DIY projects was painting her own leather jacket to wear after the formalities were out the way. “I bought a leather jacket from a charity shop for a whole £2 and my chief bridesmaid then painted for me! We included the words ‘Just Married’, followed with our wedding date. She did an amazing job! I put the jacket on after signing the register to walk back down the aisle with my new husband.” 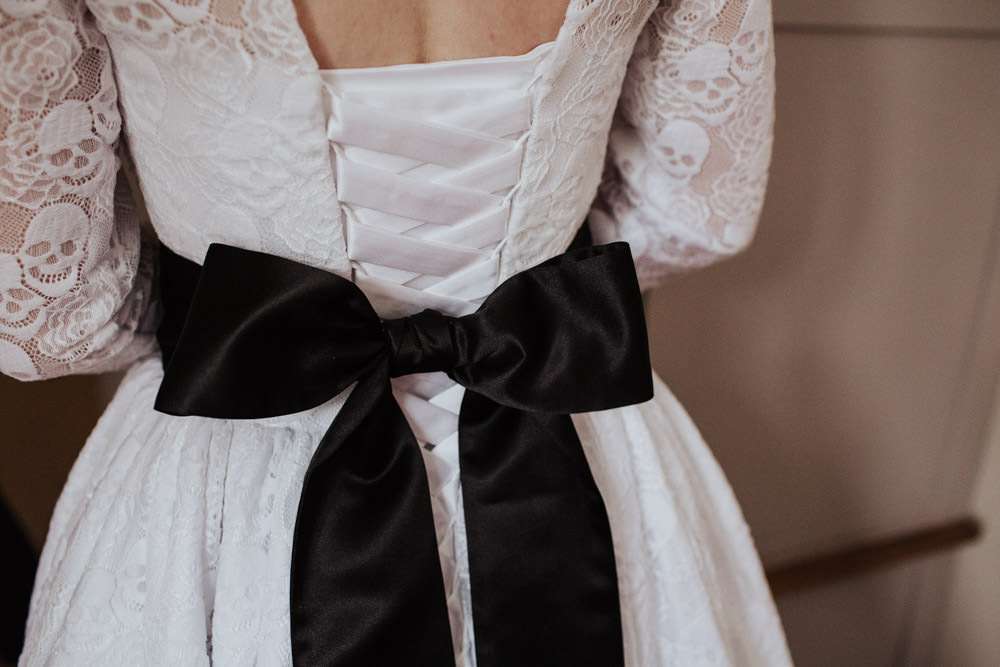 “We also painted an order of service on a palette and did various other signs too. I made white clay heart shaped ornament favours, which doubled up as table place settings, with each persons name embossed into the clay. My father made a small coffin shelf to put some of our decorations on. My mother-in-law made us our guestbook she made us a drop heart frame for everyone to write on.” 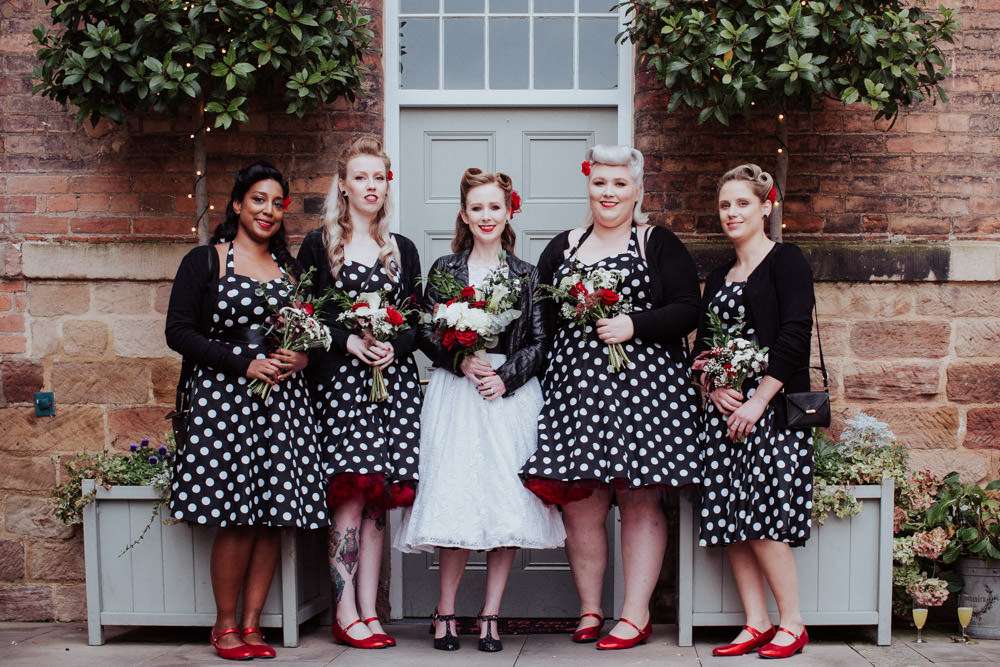 Overall their biggest expense was the catering, but it was so worth it! She explains, “As we had to use the in-house caterers we knew it would be expensive but once we did some tweaking to the menu we managed to get it to a price we were happy with and the food was amazing, definitely worth the money. We had a host a roast for the meal, which prior to the wedding I had brought silly aprons and chef hats and hidden them under some of our guests tables, they then were the nominated carvers throughout dinner and had to wear there chef hats for the duration!” 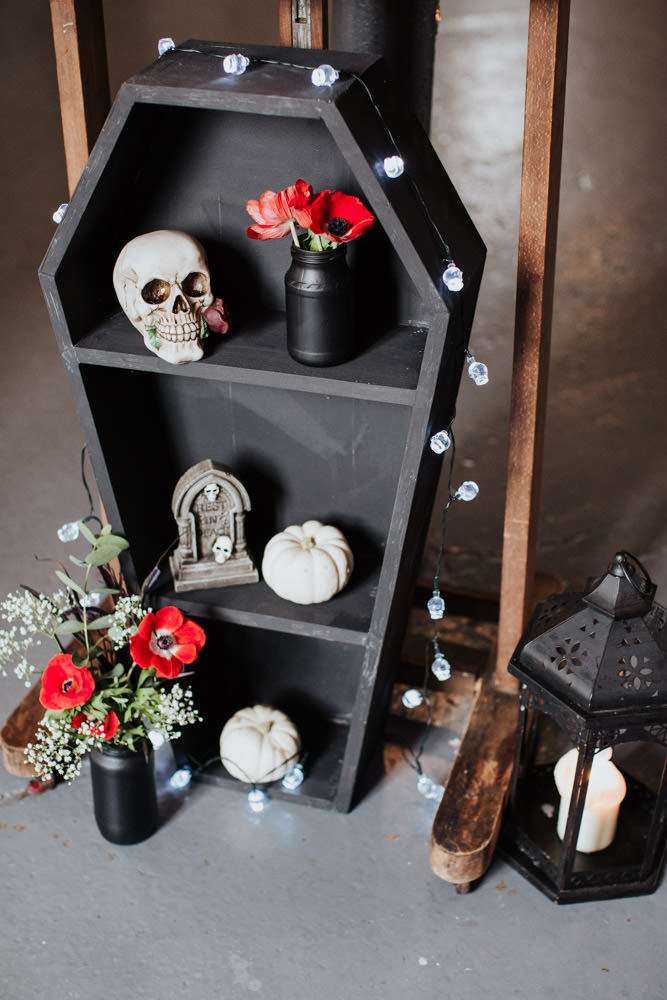 “We saved the most money by getting good deals on lots of things. As we only booked 10 months in advance we got late availability on the venue, we also booked the photo booth only a couple of weeks before so got that discounted as well and also being bit thrifty making the favours and doubling up as place cards also helped.” 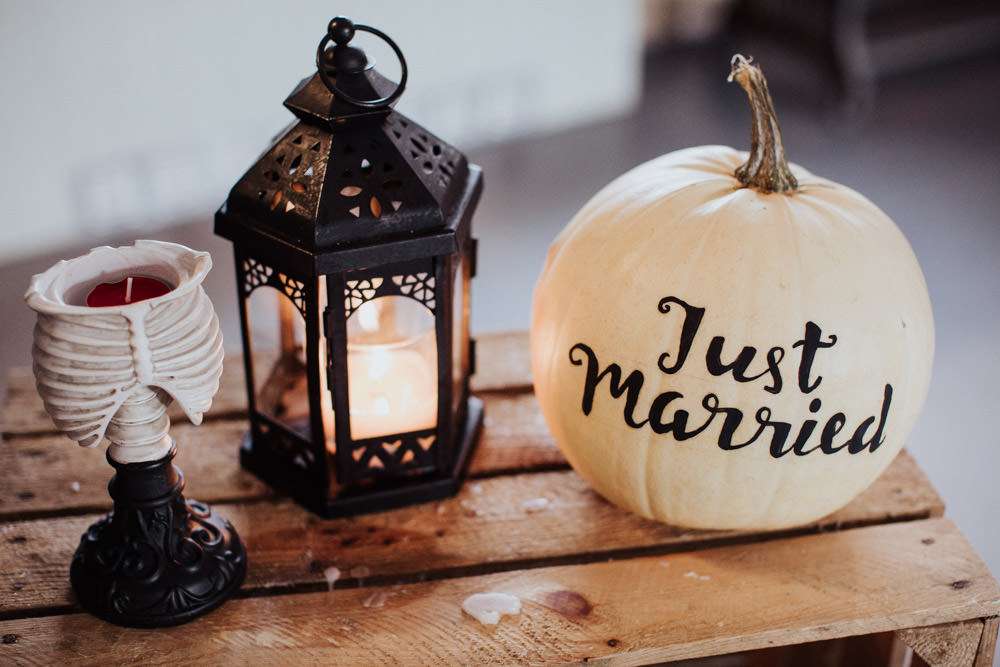 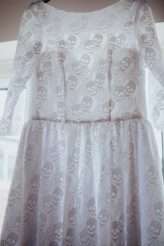 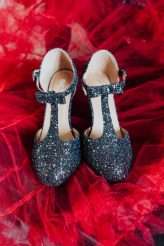 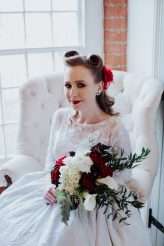 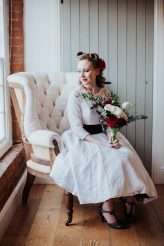 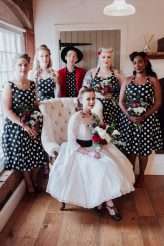 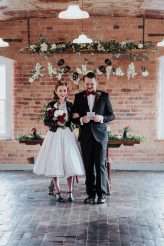 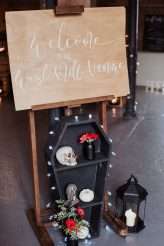 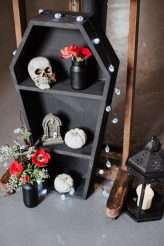 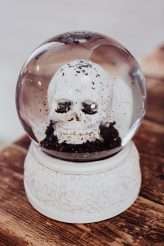 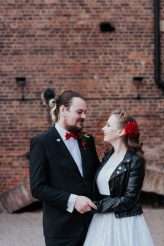 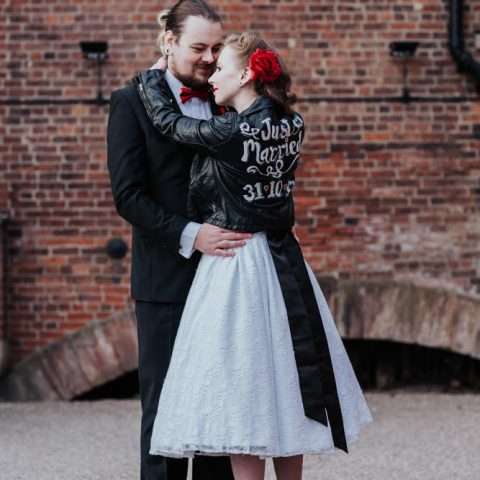 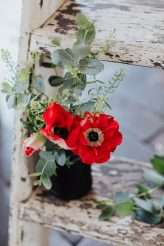 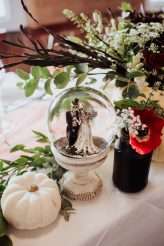 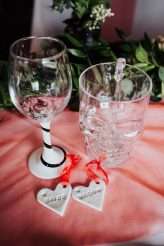 Gemma and Tom's gorgeous Brighton wedding proves that sometimes size isn't everything. They celebrated with only ten members of their immediate family and had the intimate wedding of their dreams, with a small dinner following their ceremony. They had a loose theme of 1950s burlesque, romance and Hollywood glam.

Arlene and Lee love the fifties aesthetic, rockabilly and hot rods. So, when it came to setting a theme for their summer wedding, there was no question what it would be! They chose Tomlinson's Farm Shop and Camping field for both the ceremony and and reception. Although they were the first wedding that had ever been held there, they knew it was perfect for their vision as soon as they visited. They loved the views and the owners were so accommodating - they even supplied the haybales.