Natalie and Edward got engaged in Ibiza so decided to also have their wedding there! Their day was held in a nature reserve and was bohemian in style and super creative. As they were having a destination wedding they decided to throw the rule book out and ignore tradition. 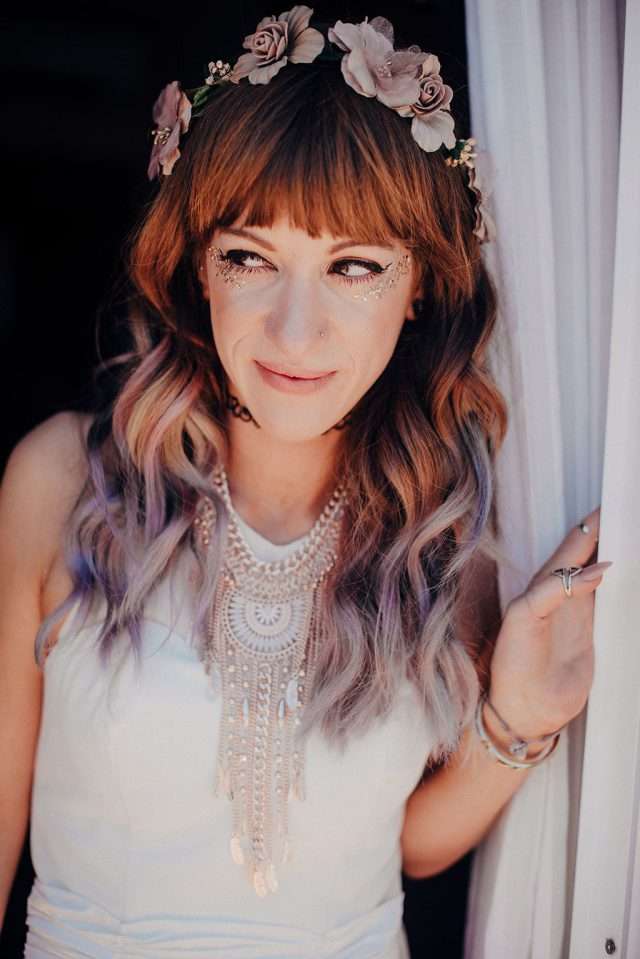 “We knew the venue well and wanted to keep the day as simple as possible,” began Natalie. “As it was in nature reserve there was a lot of wildlife and flowers around. The venue itself was very minimal and white so it just looked gorgeous as it was. We took pastel coloured paper streamers and tie dye balloons with us but that was it. Neither myself nor Edward wanted a traditional outfit. He wore a gold and black camouflage suit and the bottom half of my dress was rose gold sequins!” 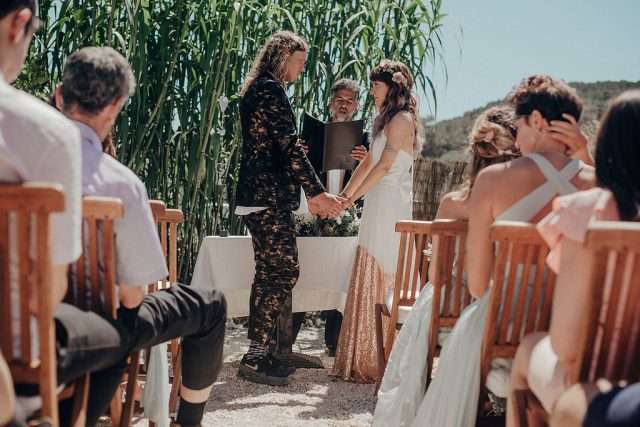 “We don’t like a lot of fuss and we wanted everyone to feel really relaxed so we didn’t want too many things going on. Yet we did want little touches of personality to make sure it still felt like our wedding. Our flowers, dresses and decorations all followed a pastel theme and all our stationery was hand drawn.” 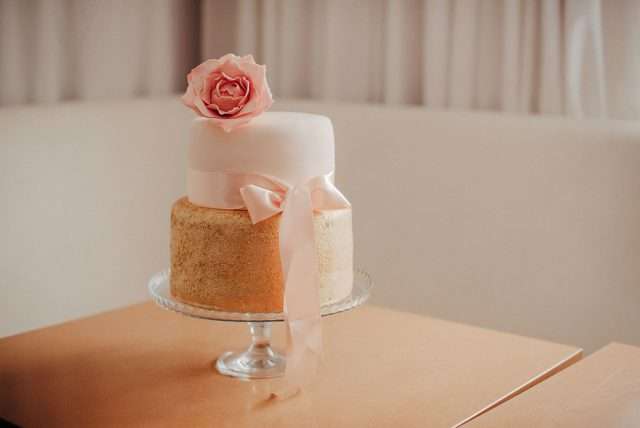 Ibiza and their venue were the main inspiration for the wedding. “We go to the venue, Boutique Hostal Salinas, every year on holiday and we love it, plus it has a massive piece of graffiti on the side which looks super cool. We were inspired by Spanish food, art, clean white walls, sunshine, the beach, birds and wildlife. The hotel were really good to us and we can’t recommend them enough – they let us stay up late, they were really relaxed about everything, and even though we were naturally worried about how the food would turn out (because they’re in Ibzia and we’re in England so we never got to sample anything) it was exactly what we wanted from start to finish. Their staff were great, nothing was too much trouble, they coordinated everything smoothly on the day and we didn’t have to worry about a thing.” 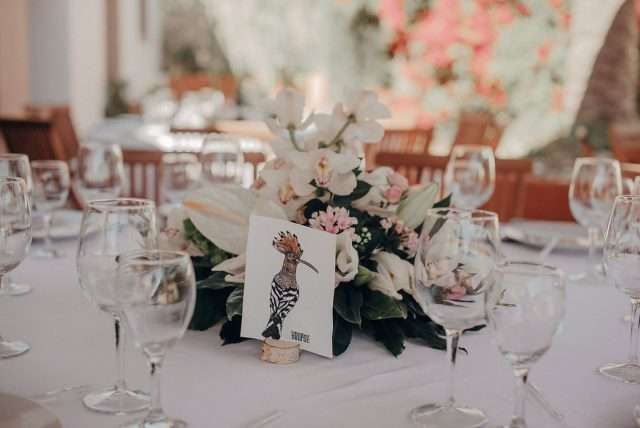 Natalie actually didn’t start looking for her dress until five months before the wedding. “I went into a wedding dress shop five months before the wedding to start looking for a dress and they were all horrified that I hadn’t chosen it a year before! I guess our method of planning was so laid back that we hardly mentioned it until it got close to the date (apart from the bridesmaids, we had plenty of WhatsApp messages about their dresses haha!) A lot of couples planning a wedding seem to let it take over their whole life, but we didn’t want that to happen.” 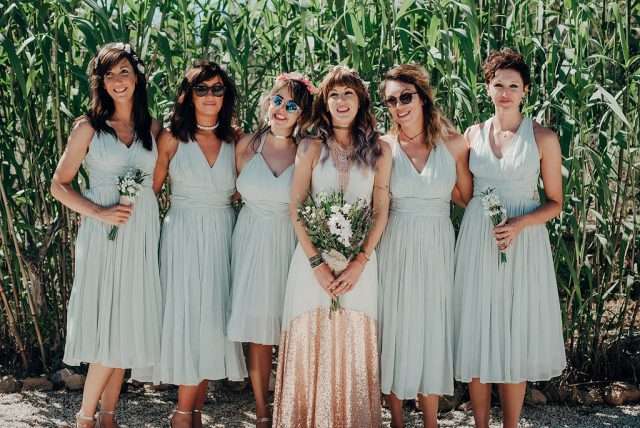 To make things easier as the wedding was abroad, all the bouquets were made of fake flowers. “It was a lot easier and cheaper to just take them over in a suitcase instead of paying a lot for real ones over in Ibiza – plus they last forever! We got some individual fake flowers for the bridesmaids and made them into a little bunch, the flowergirl had a trio of silk white roses, then my bouquet was ready made. I added some hessian and twine around the stems of all of them to make them a bit more rustic. We didn’t order any flowers for the tables, but we had a stroke of luck when a wedding from the previous day left theirs behind! So we ended up with some gorgeous flowers and I can’t even tell you where they were from!” 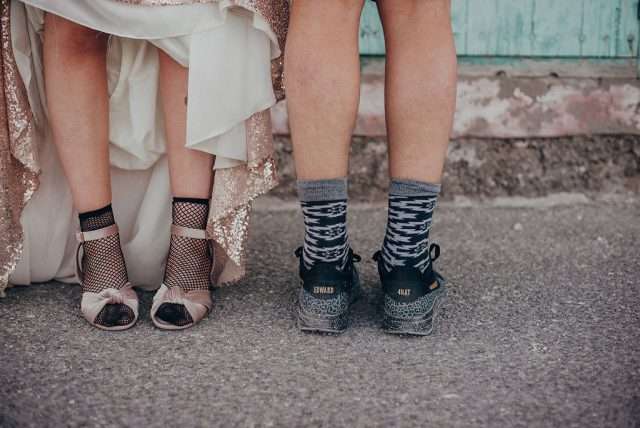 As the groom loves birds, they named the tables after them and he draw pictures for each. “The table theme was ‘Birds of Ibiza’. Edward loves birds, so he drew an individual bird to go on each table. All invitations, table plan and menus on the day were hand drawn by him too.”

“For us, the best thing about wedding planning was when you’d got the main things sorted and we could sit back and plan the little details”. she said, “such as the table plan, what was going to go in my hair and how much glitter I could fit into my cabin bag! The worst thing was feeling like you’ve missed something or you don’t have enough cool things going on because it’s over budget. But while having LED-lit flamingos leading up to the aisle would look totally great, once the day gets going you realise that nobody’s bothered if you don’t have these things.” 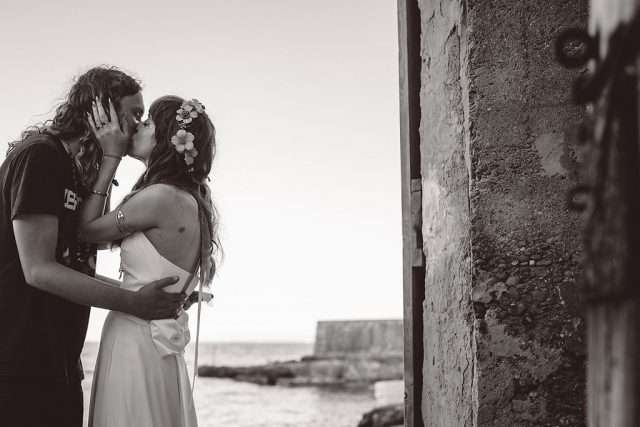 “Our advice for future brides and grooms is to make sure you make some kind of list for the day with exactly what needs doing, who is doing it, and where the equipment and decorations will be. Also, take a moment out with each other after the ceremony otherwise you’ll hardly get to see each other. The day will go so much faster than you expect and all your friends and family will want to congratulate you, especially if people are there you haven’t seen in a while.” 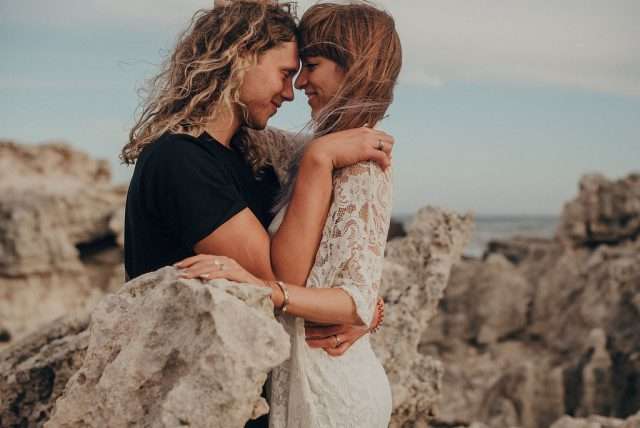 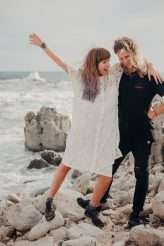 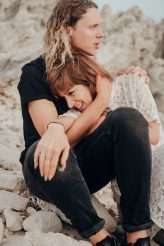 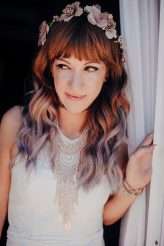 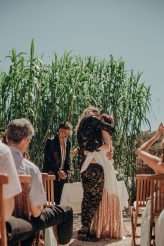 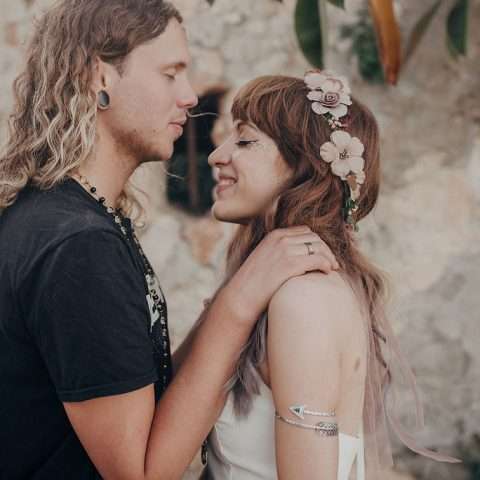 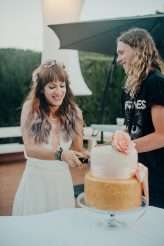 Here we go then - part two of Sarah & Doug's Cornish wedding and things are about to get colourful! On Saturday 16th June the couple hosted a humanist ceremony and reception at Rosewastis Manor in St Columb Major. They had a quirky tent marquee from Ashley Events which they decorated themselves. In fact the couple and some of their guests actually rented the manor for the whole week before to set up and just enjoy spending some time together before the wedding. For this second part of the wedding, Sarah wore a Lisa Redman wedding gown which she found at a charity bridal sale in London. Her shoes were from Irregular Choice, her headpiece was made by her and a friend from vintage pieces and her ring was her Grandmothers.

Naomi and Glen spent just £4000 on their amazing boho wedding in a yurt in September. They saved money everywhere - from the bride having her dress made by a friend, the food being made by friend and family, DIY stationery, the flowers being arranged by Glen's mum and the cake being made by Naomi's sister in law!

Viki and Ben's wedding day was princess themed, but with added personality. Their official theme was 'Alternative Disney' and they were inspired by The Magic Kingdom and the fact that Viki, who is covered in Disney tattoos, had always adored the idea of a huge sparkly dress and a beautiful backdrop. Their cake was Beauty and the Beast themed, the bride's dress was the Cinderella gown from Alfred Angelo and they took their photos with a Disney inspired prop book.