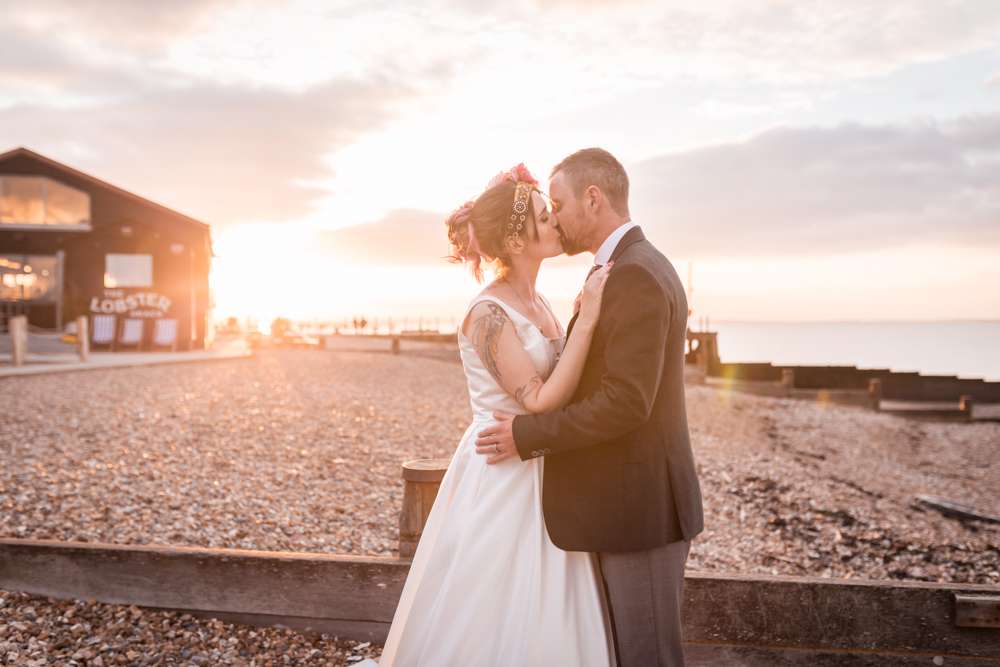 Rosie and Alex were married in Kent in October. They did things on a budget, spending no more than £5000, and planned it all in eight weeks!

Initially they weren’t even sure if they wanted a wedding, but after speaking to a photographer at another wedding, the bride changed her mind. “I said to the photographer that I wasn’t even sure I wanted to get married”, she explained. “He replied ‘I know it’s a cliche but it really is the best day ever. Everyone you like is in one place, looking great, having fun and wanting to hang out with you.’ That was really what inspired us to actually go through with it. It just seemed like such fun. We tried to keep that in mind with all our choices; it had to be fun for our guests and for us.” 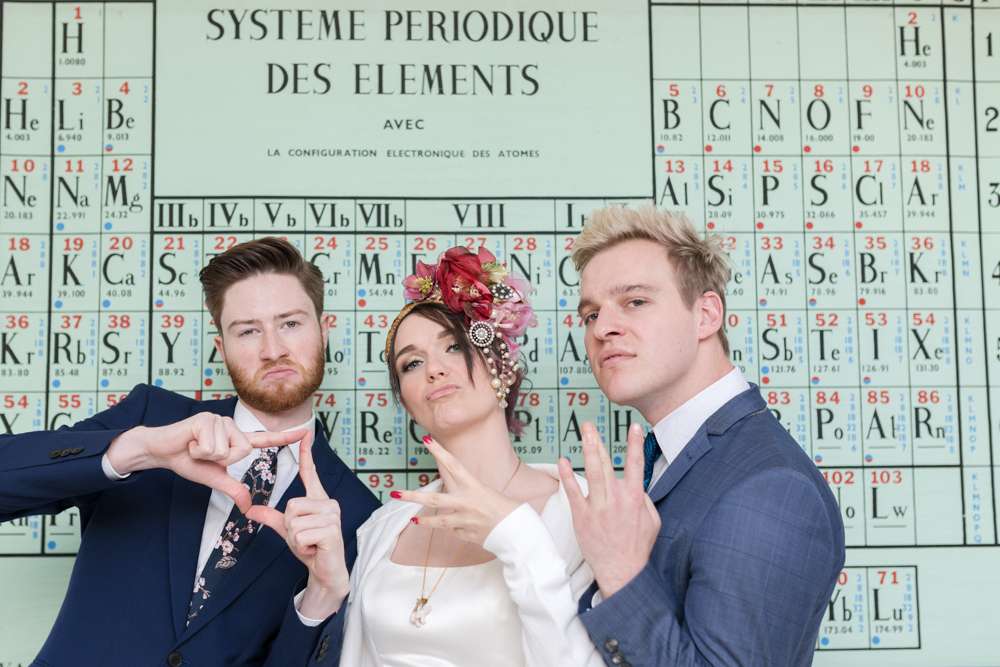 They didn’t intentionally have a theme but there were nods to some of their favourite films dotted throughout the day. “Our tables were named after characters from movies, I walked down the aisle to You’re So Cool by Hans Zimmer and we skipped the first dance and had a mass twist competition (a la Pulp Fiction). I wasn’t interested in getting everything to match and I’m not naturally a ‘planner’ so the prospect of a theme that I‘d have to stick to just scared the crap out of me.” 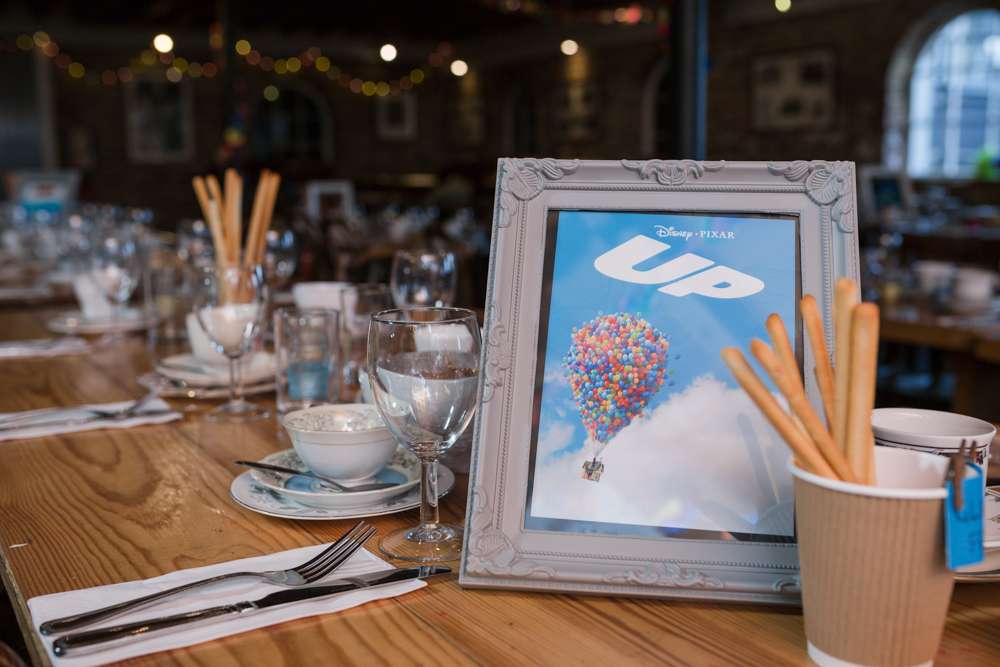 “We skipped a bunch of traditions because they either seemed stuffy and pointless or because there was a much cheaper alternative. I wasn’t ‘given away’ by my Dad because I’m not keen on the notion of being anyone’s chattel and my Dad is probably the only human as awkward as I am so, with our powers combined, that was never going to happen. We also didn’t have a cake but a bunch of our guests are amazing bakers so we had a ‘bring your own pudding’ buffet table. I had my two ‘bridesmen’ mostly because they are the best at organising things and look so dapper in photos. Alex didn’t want to choose a Best Man so he just didn’t. I don’t really think of it as being unique or alternative, we just did what we wanted.” 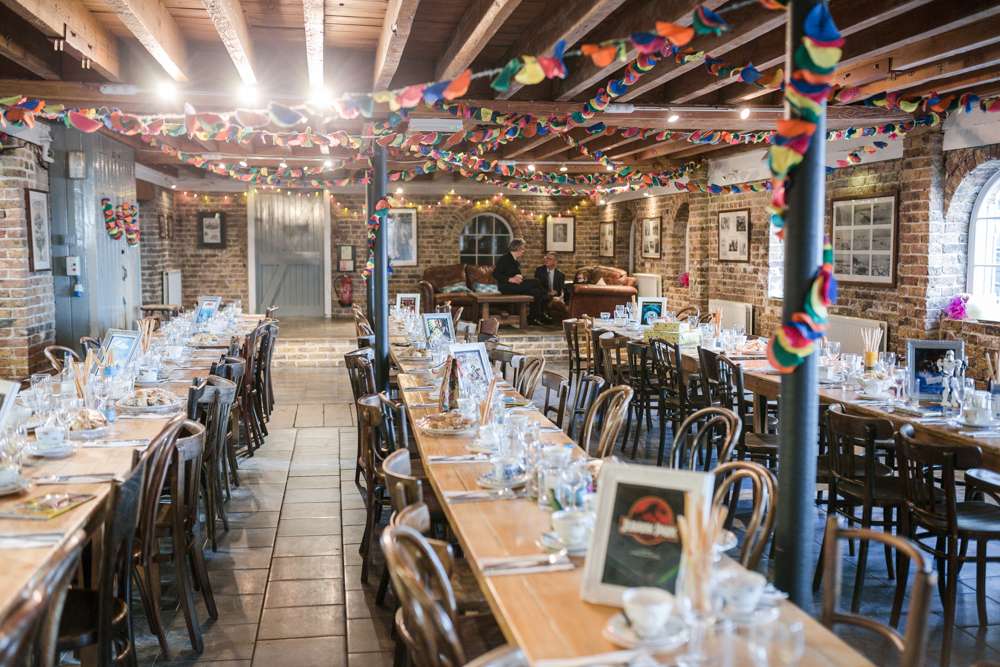 The ceremony was a non-denominational, humanist service and they changed things that didn’t make them comfortable. “I didn’t want to do a big reveal (I’d just implode with embarrassment) so I tried to arrive at the venue around the same time as my guests,” Rosie continued. “This helped with my anxiety A LOT. I walked down the aisle with my 4-year old daughter in the hope that her cuteness would distract from my awkwardness, which it totally did. We were already legally married so we were able to have my aunt, who is a humanist celebrant, perform the ceremony. We are both atheists, but a few of our friends and family aren’t so a humanist ceremony seemed to work perfectly. With the focus on unity, positivity and acceptance, it seemed spiritual enough for those who wanted it to be and distinctly non-religious for those of us that felt that was important.” 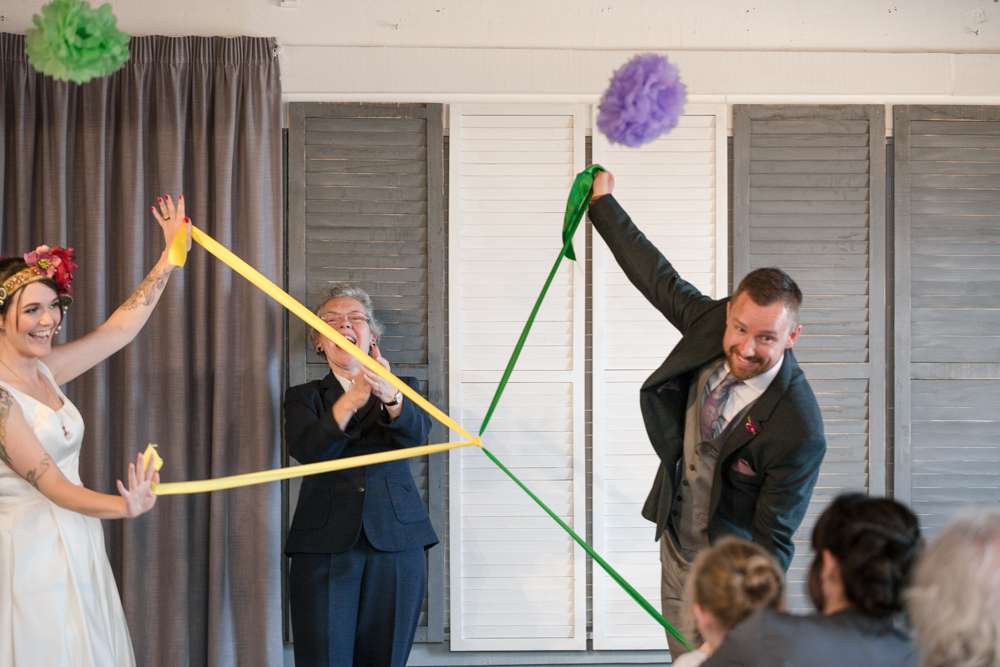 “Our favourite part of the wedding was really just being with everyone. With babies and jobs and life happening, it’s so rare that we get to spend time with everyone we want to so the whole day just felt like such a treat. On a totally personal level, I absolutely adore my headdress. I’ve been swooning over Hippy Poppins’ headdresses for years and I’m so chuffed that I finally have my own, custom-made piece of glorious head art. I felt like a freakin’ QUEEN!” 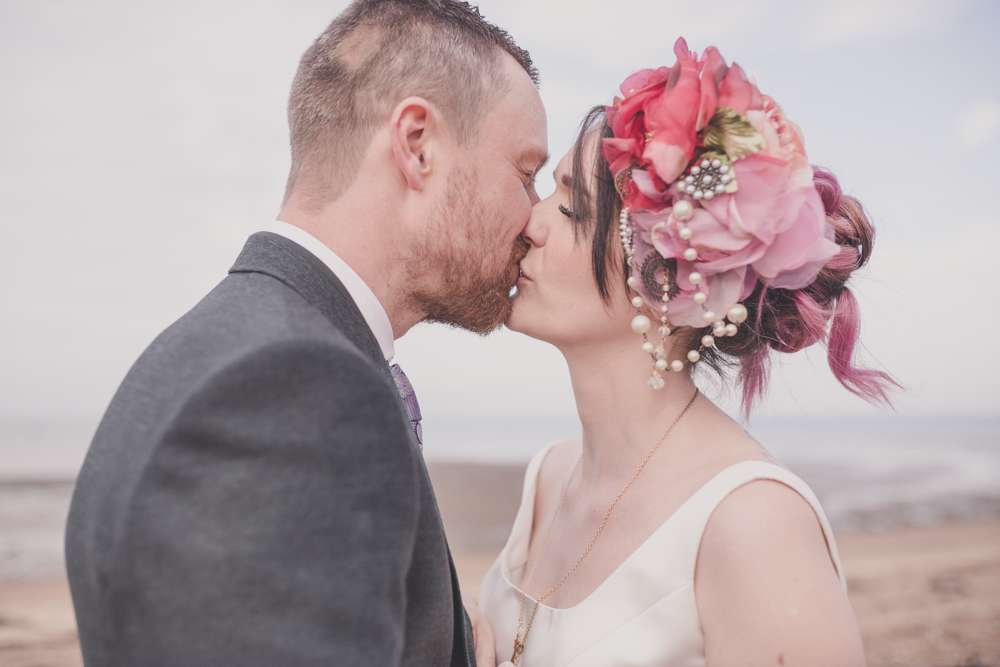 “To be honest, I didn’t really enjoy wedding planning”, she concluded. “It’s essentially events management and that is a proper job that people get paid to do, and I can totally see why. I just found that I didn’t relish the responsibility at all. Having said all of that, having that excuse to spend time with my bridesmen was really great. They were super supportive and kept me from disappearing into an anxiety filled hole, mostly by reminding me that Beyonce would never let herself be beaten by a table plan.” 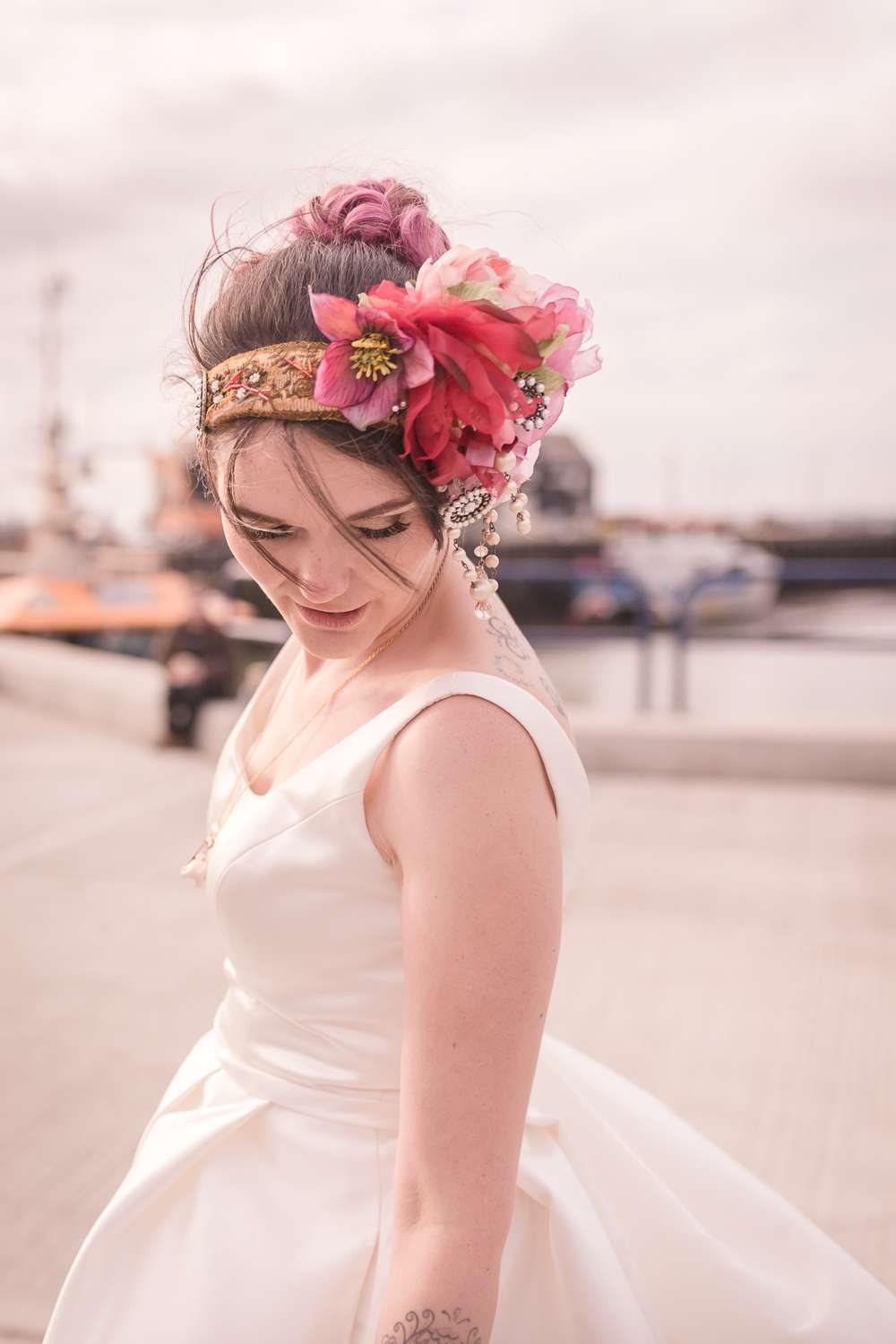 “In hindsight, I definitely would have started planning earlier, we left about eight weeks to get everything together and that was a massive mistake. I’d love to have had the time to really flesh out some of the grand ideas I had last minute, which just had to be missed because of the limit on our time and budget.” 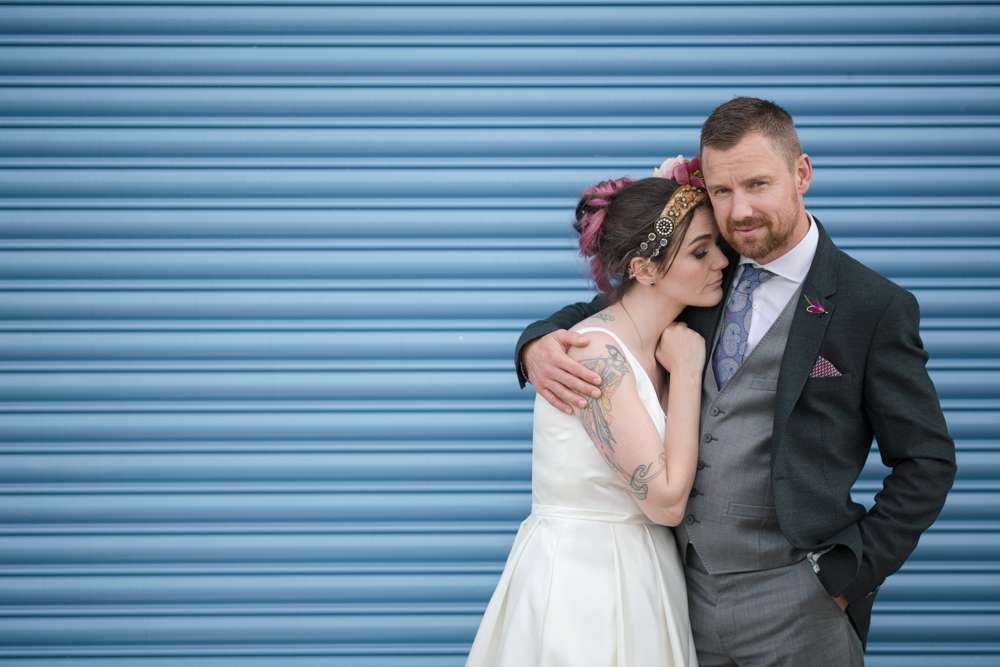 “Our advice to brides and grooms would always be not to put too much pressure on yourselves. It doesn’t have to be perfect and it almost definitely wont be. Do the things that make you feel calm and confident and try to remember that it’s a party, have fun. Also, if you can have a big fancy headdress, then you probably should.” 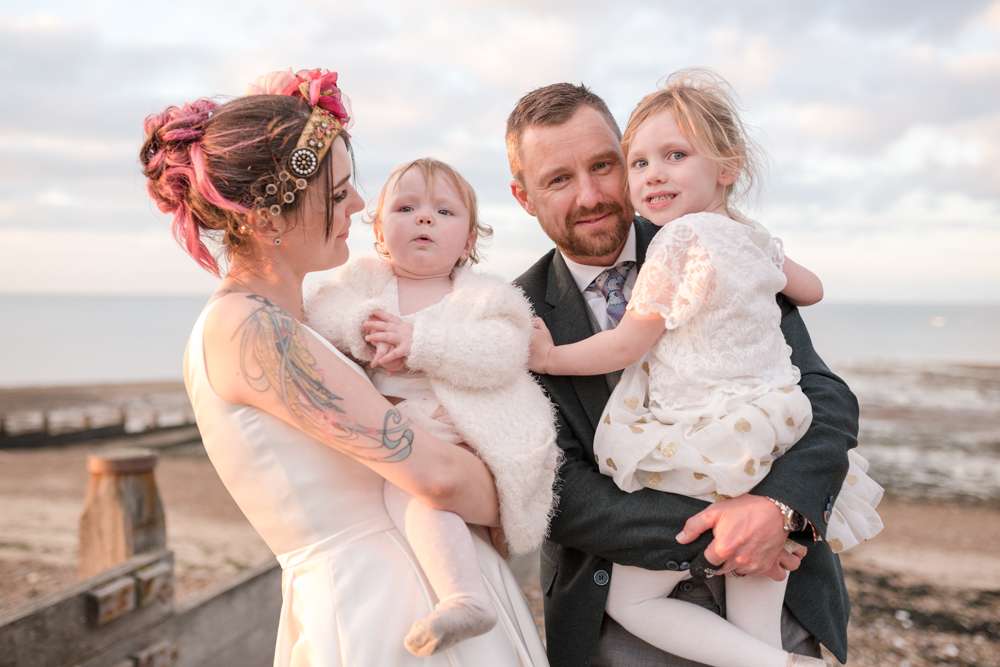 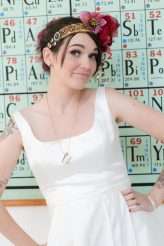 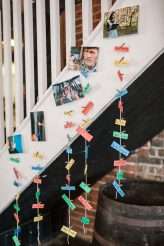 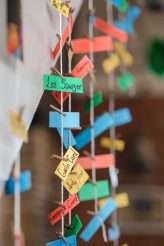 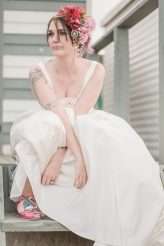 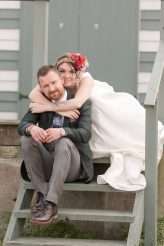 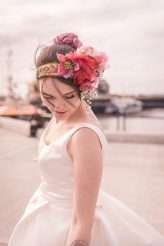 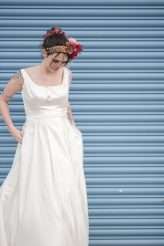 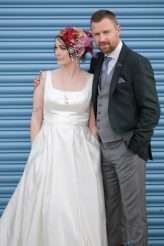 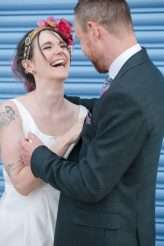 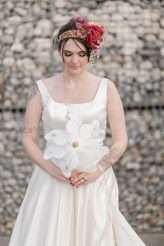 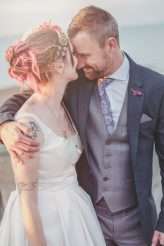 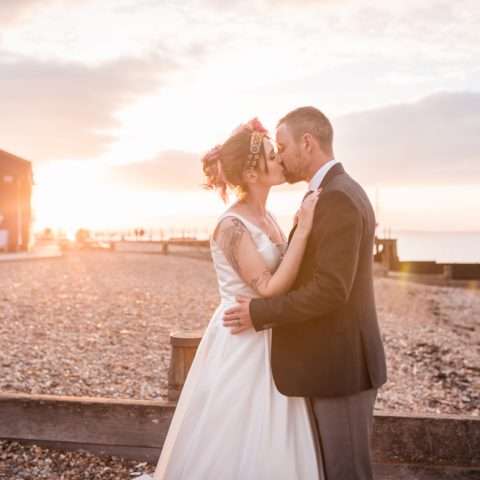 Turquoise Wedding at the Seaside with 31 Guests

Claire and Chris were married in June at The Dome in Worthing. The inspiration for the wedding was to have a small, intimate day with their closest friends and family. "We wanted to feel surrounded by love from those dearest to us", said the bride. "We had 31 guests and found this to be the perfect number. We had plenty of time to speak, hug, laugh, cry and dance with all of them."