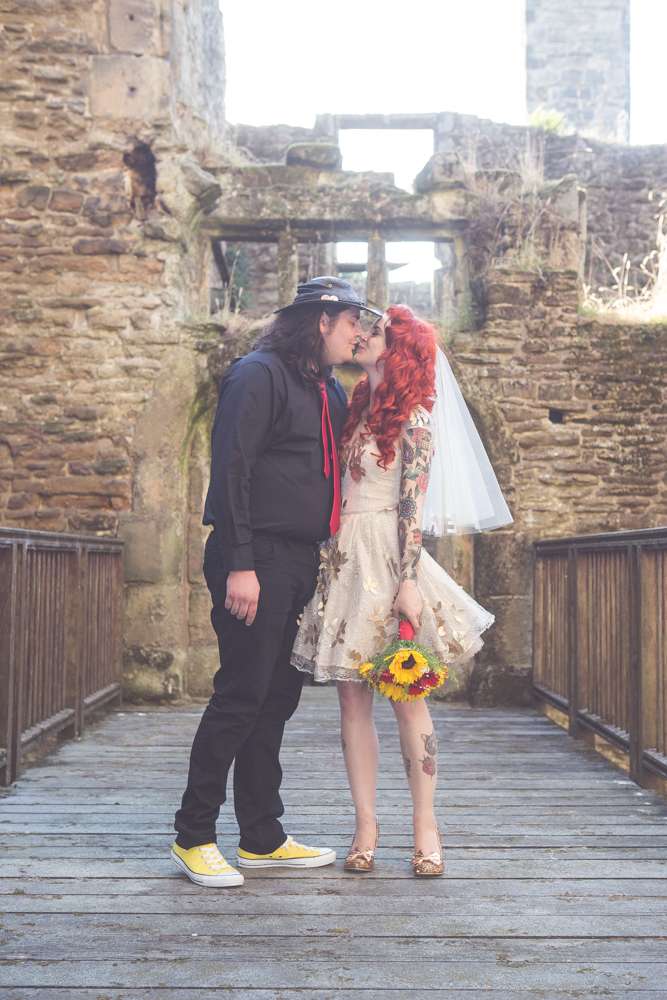 Katie and Jeff met at school and have been together since they were 15! They were married in August and described their wedding theme as ‘complete randomness’. They were inspired by their love of music so Jeff wore a yellow jacket as a tribute to Queen, and Katie had their favourite Foo Fighters song on her Crown and Glory veil. They also asked all their guests to request a song on their RSVPs so that everyone would enjoy the music on the day. 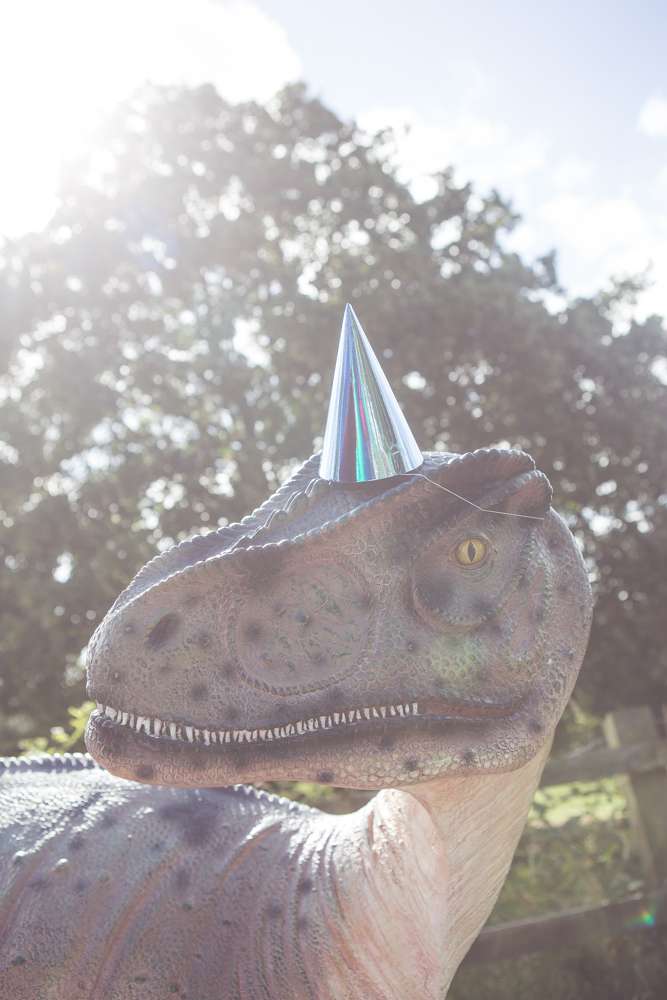 The couple got married in Jeff’s family home, Wingfield Hall. “We took a lot of time to get Jeff’s parent’s house registered for marriages so we could have it at his family home”, began Katie. “The ceremony was everything we wanted it to be. We got married under an archway in the middle of the room so it felt really intimate and all the guests were close to us. We wrote our own vows that mentioned our cat Frank and our favourite song lyrics and had my brother give a reading (which made everyone cry).” 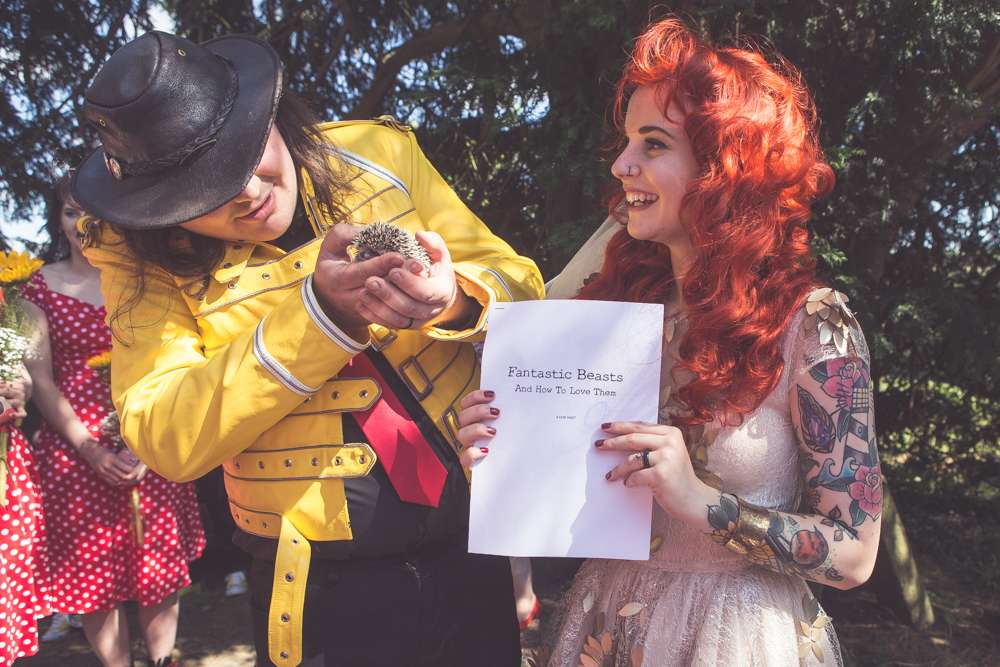 “Actually getting married was definitely the best bit, but the whole day was amazing too. Everyone had so much fun and it was incredible to have all of our favourite people in one place at once. Straight after the ceremony one of our best friends gave us our wedding present: an African Pygmy Hedgehog! She is so beautiful, we love her to bits.” 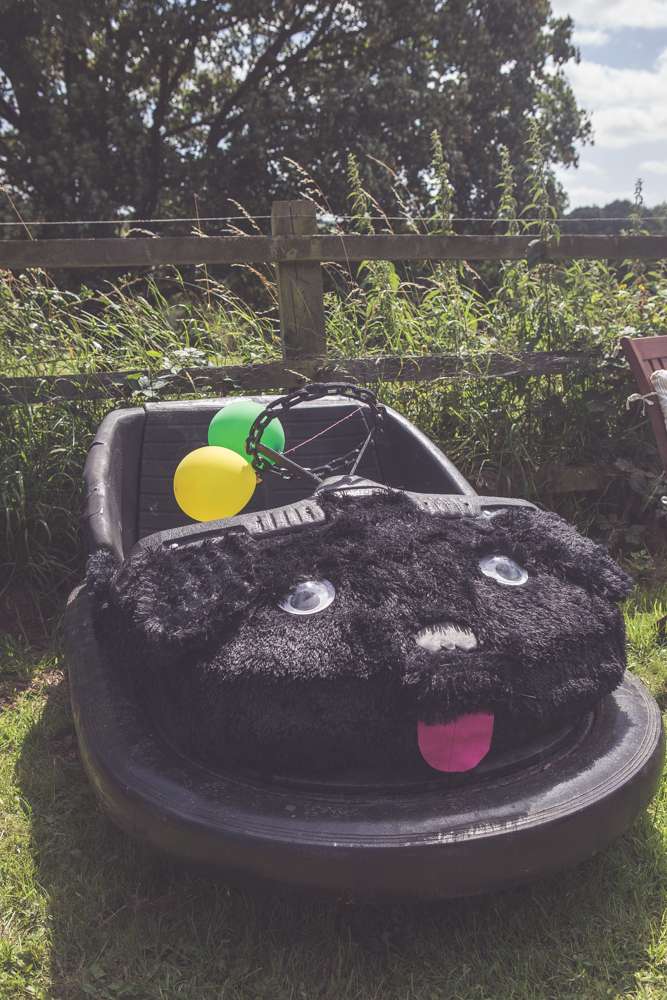 “The first thing we bought for the wedding was a dodgem car”, Kate laughed. “We also had two life-size dinosaurs, a homemade mini car ball pit, an ice cream van, popcorn machine and inflatable cacti and flamingos for decoration.” 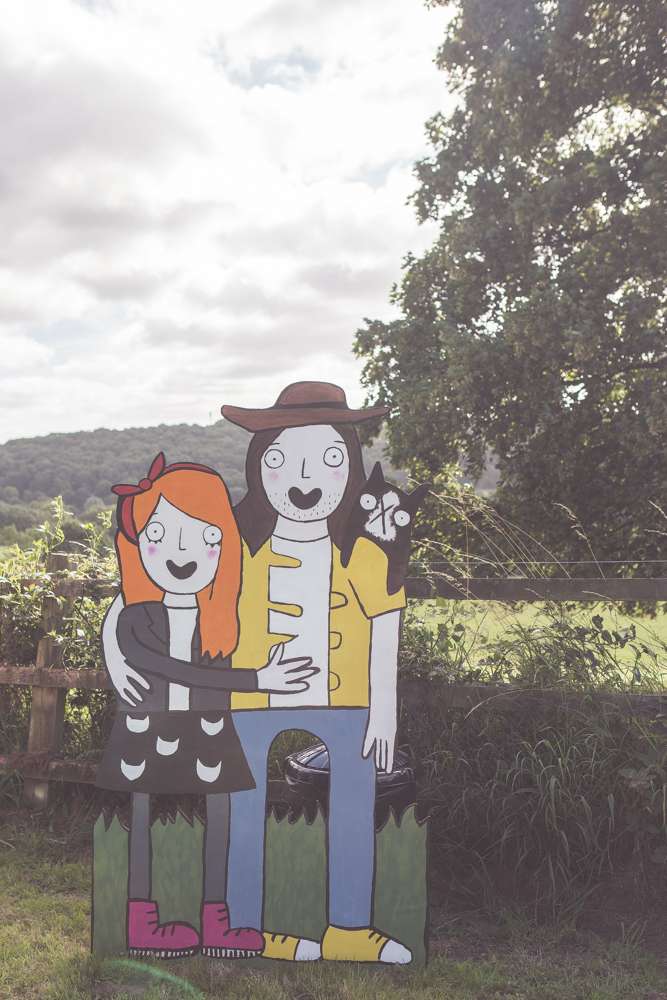 As she’s an Illustrator, Katie designed all the stationery as well as some unexpected surprises! “For DIY projects I designed all of the save the dates and invitations for the guests, I also helped my dad to make a giant painted cutout of me, Jeff and Frank the cat! My mum made some of the bridesmaid dresses and lots of bunting, and the guys turned a Mini into a ball pit! My parents and brother helped us to turn a dodgem into the late family dog!” 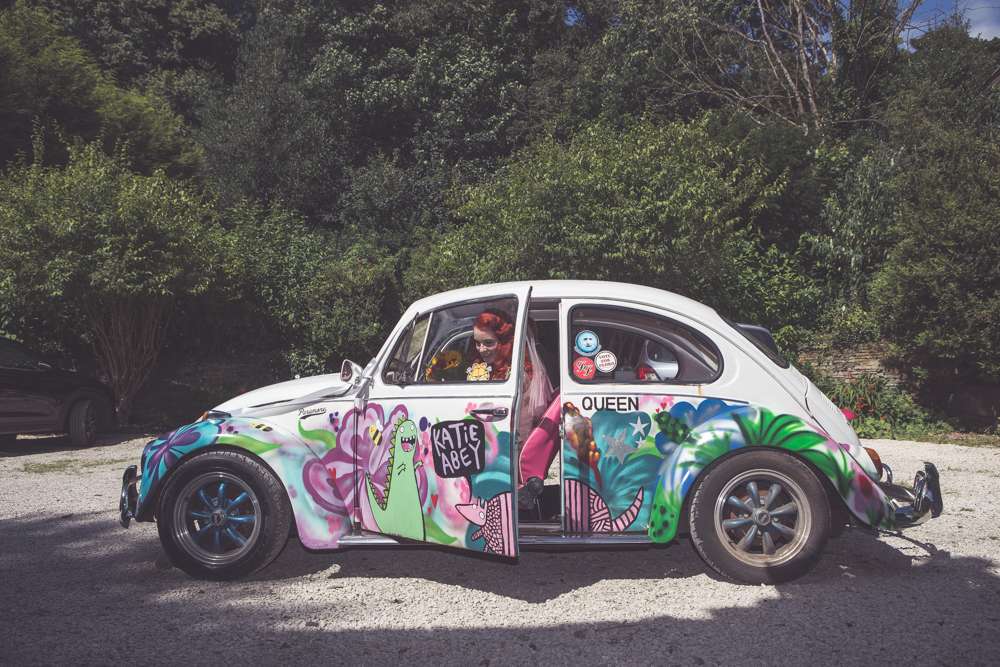 “Our marquee for the evening reception was our biggest expense as we wanted to get one that was big enough and we also wanted it to be stripy (we had always imagined having a circus tent as part of our big day). However we managed to save money on my dress as I found one really by Chotronette that was not only under budget but was exactly what I wanted.” 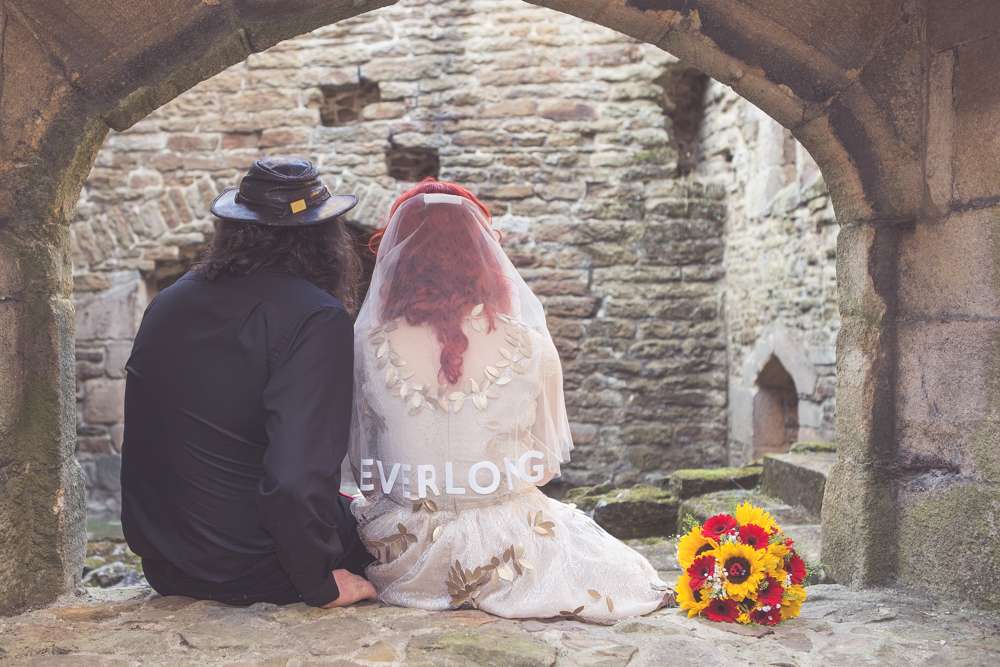 “Our advice to future brides and grooms is to keep your guests in mind”, Katie concluded, “they have to be there all day so make sure you have plenty of food and things to keep everyone occupied. If everyone is having fun the rest will honestly not matter. And basically make your day as true to yourselves as you can. Don’t feel like you have to follow the traditional wedding template if you don’t want to.” 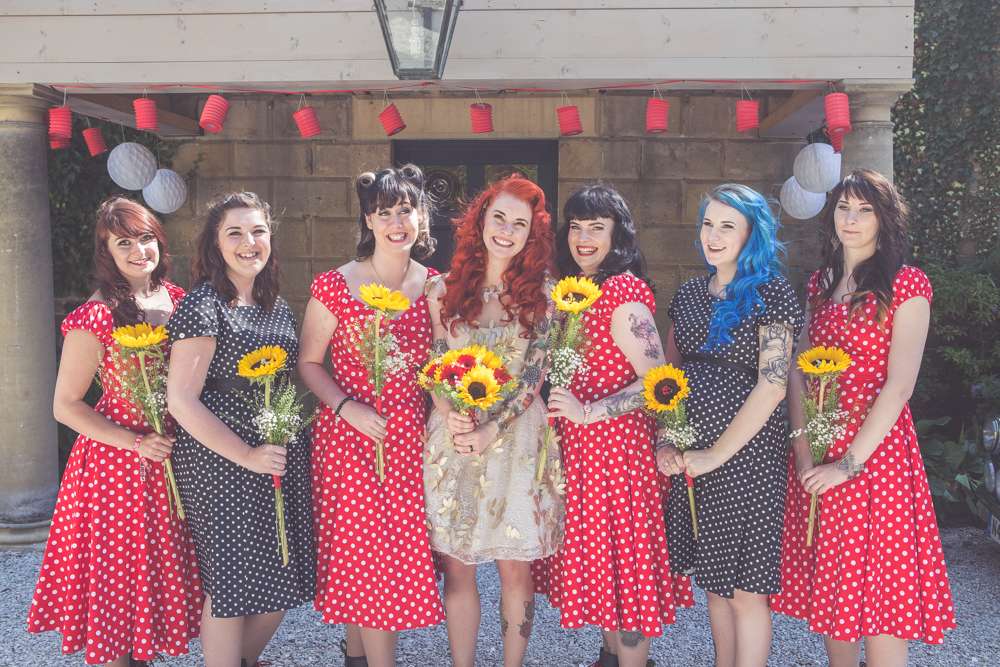 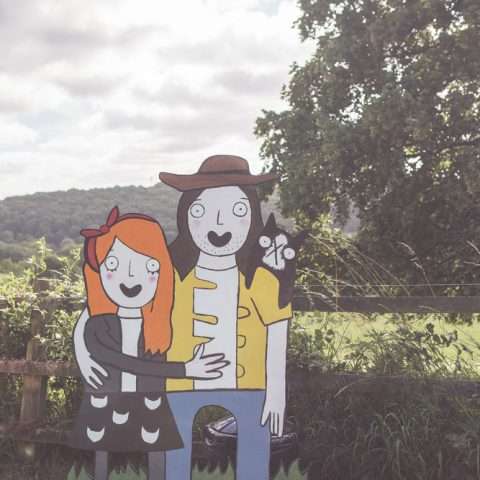 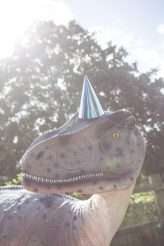 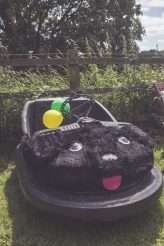 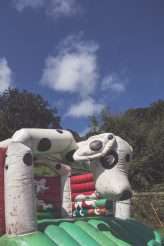 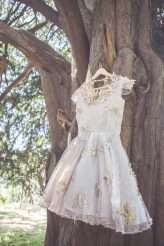 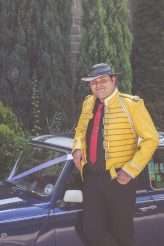 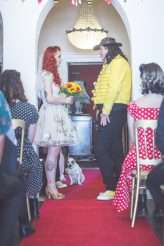 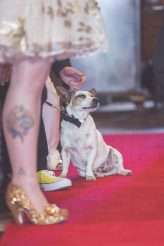 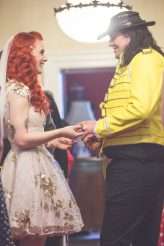 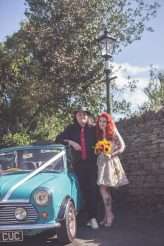 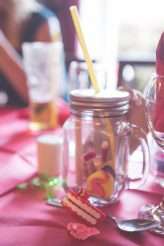 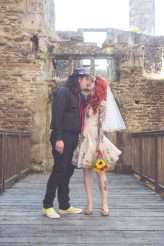 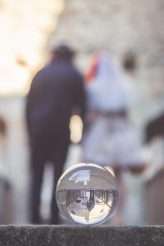 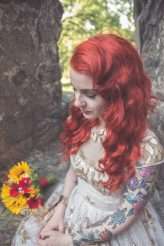 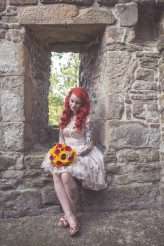 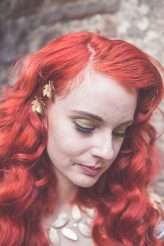 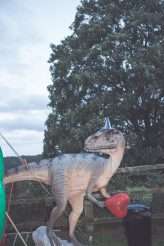 Lynette and James' wedding was quintessentially 'them'. They were married with just the bride's brother, the groom's mum and their two children as guests. Their son wore a dragon onesie and their daughter fluffy ears and a tail. The bride wore leopard print leggings under her dress. After their short ceremony they all went to a local restaurant for lunch together.

Sarah-Lily and Jon wanted a fun wedding that they'd created themselves. Their main theme was dinosaurs and glitter and all their family and friends pitched in to help.