Josh and Katie, both from the UK, travelled to San Francisco in September to elope. They had a reception for their loved ones back home at a later date.

“We are both very fond of the 70s era”, Katie explained, “Our living room is like something out of a mid-century furniture magazine. I knew my dress would be vintage, but I didn’t have a set style in mind. When I came across my 70s, handmade Mexican dress on Etsy, I knew it was the one. I had bought it within a month of us getting engaged. It needed a fair bit of work, but a friend is a seamstress and fixed it up wonderfully. Perhaps the dress set the bar for the laid-back, bohemian feel.” 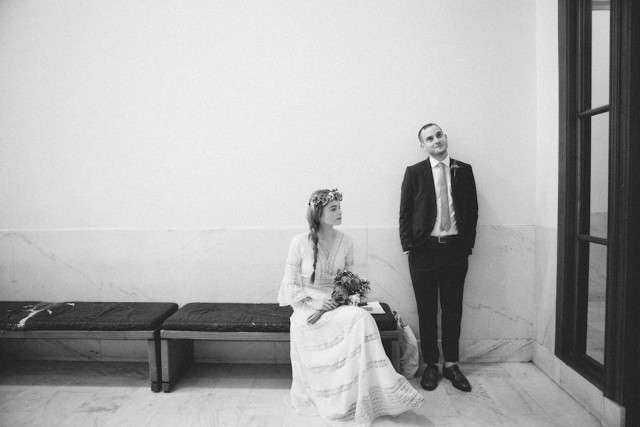 “Our wedding was different just because of the way we did it”, she continued. “We decided to elope alone to San Francisco at City Hall. It is one of the most beautiful and grand buildings either of us has had the pleasure of visiting. It was perfect and neither of us can imagine doing it any other way. We got married exactly a year after Josh proposed in New York with an Edwardian ring of opals and diamonds, on the rooftop bar of The Wythe Hotel in Williamsburg.” 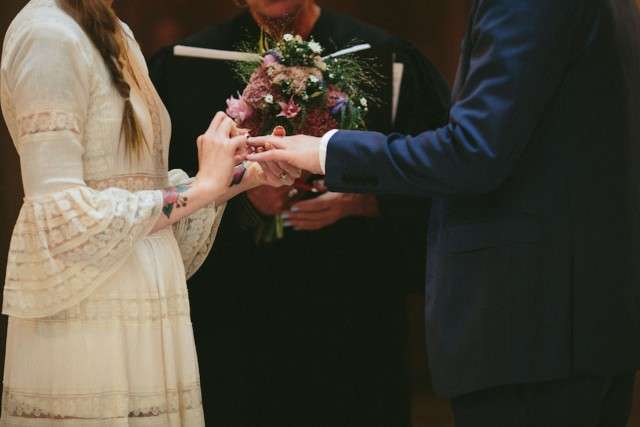 “We knew we wouldn’t be having a long engagement so almost straight away viewed some venues, priced up food and drink and soon realised just how much it was going to cost, even with the humanist DIY/ barn/ outdoor shindig we envisioned. This, paired with our impatient natures and the idea of all the traditional aspects of a wedding, such as speeches and a first dance (we would probably rather swim in shark infested waters), led me to – jokingly – suggest that we run away to California. It unravelled from there. We had visited San Francisco in the first year we got together and fell in love with the city, so much so that we both have a tattoo of the Golden Gate Bridge on our arms.” 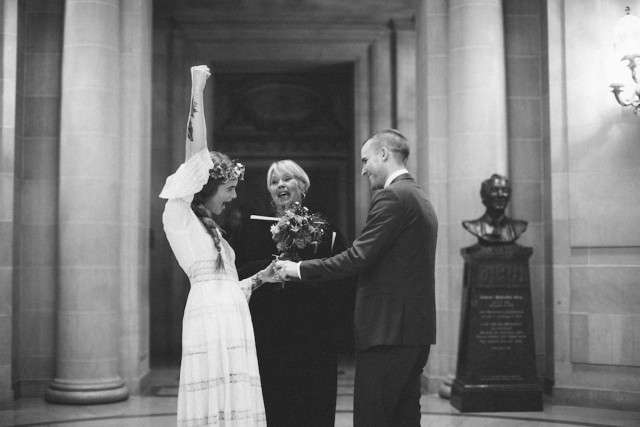 “The ceremony itself took a grand total of 6 minutes”, she said. “It was short and so very sweet. We were in City Hall for two hours. We had an appointment to get the license at 1pm and the ceremony followed at 2pm. There was a lot of waiting in line and paperwork to fill in and we also had to carry out a sworn statement and put our right hands in the air, so very American! It was super fun waiting with all the other couples lined up outside the County Clerk’s office. There was a lovely atmosphere and Diana (our wonderful photographer) was snapping away, capturing candid moments. We also met the officiant who was going to conduct the ceremony beforehand.” 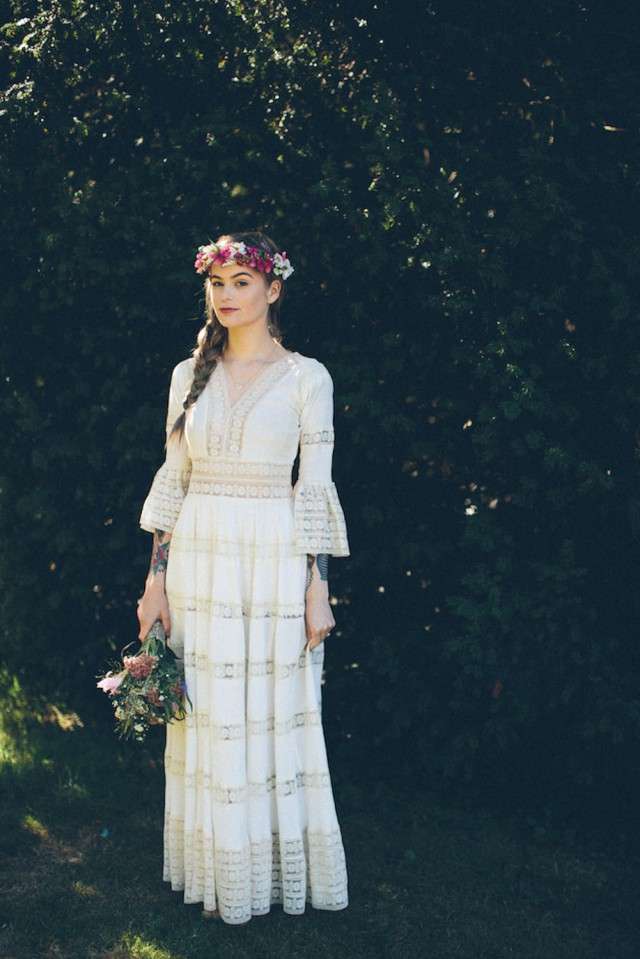 “As we were far away from home, we took a mini tripod and used Josh’s phone to stream the ceremony on Periscope. We placed it discreetly on the floor in front of a column so that our closest friends (and my mum!) could watch in England. Before we put it down, our officiant, Ms. Anderson, introduced herself and said hello to everybody watching. My best pals got together with pizza for the occasion. Isn’t technology brilliant!? We were married at the top of the grand staircase in City Hall. We didn’t need witnesses as we opted for a confidential marriage license, so it was just us, Diana and Ms. Anderson. City Hall was buzzing with people, but in those few moments it felt like it was just the two of us.” 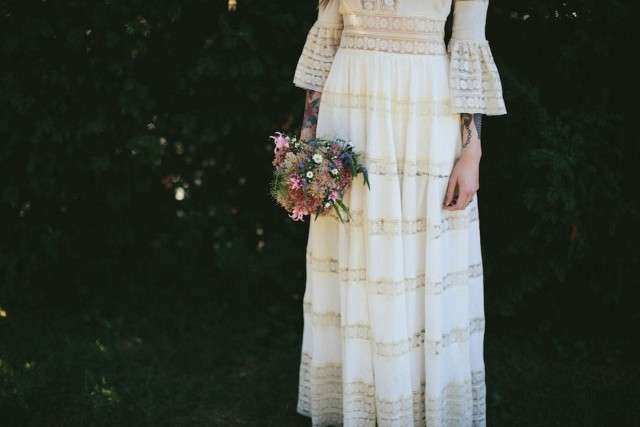 “We wouldn’t do a single thing differently, but I wish I had spent more time on my hair on the day”, the bride concluded. “I was in such a flap and had to iron my dress and Josh’s suit because we were too lazy to do it beforehand. I felt my hair was a bit messy, but my friends promise that it looked bohemian and undone in an intentional way.” 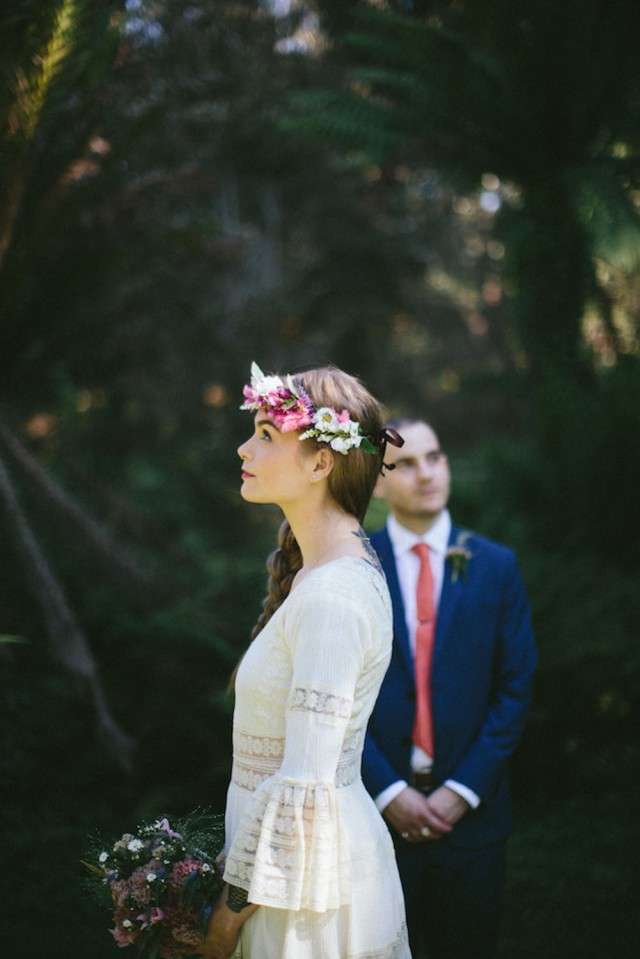 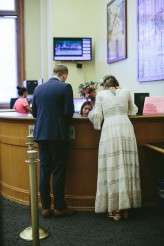 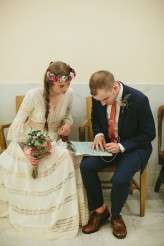 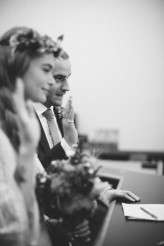 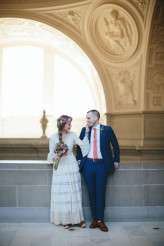 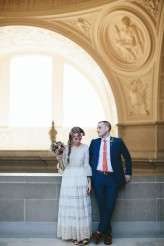 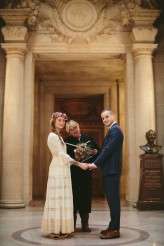 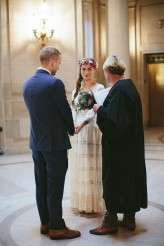 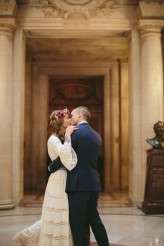 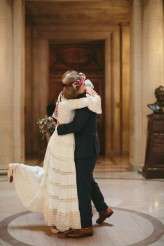 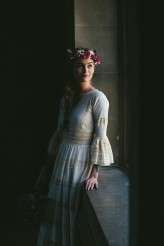 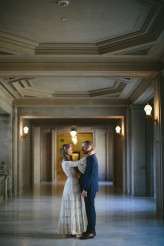 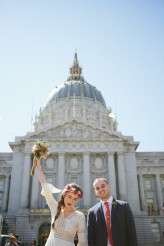 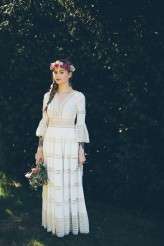 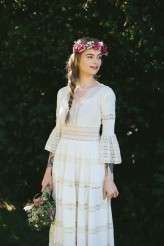 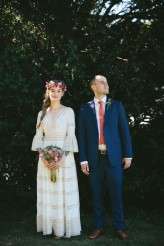 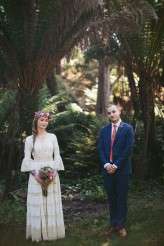 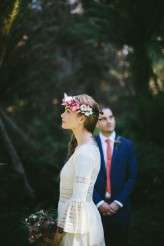 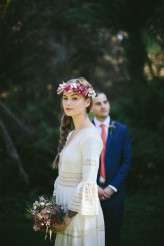 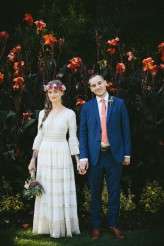 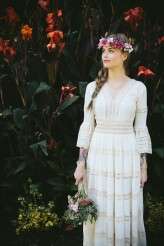 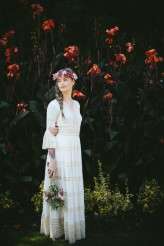 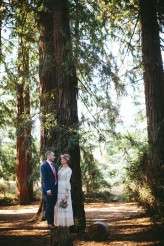 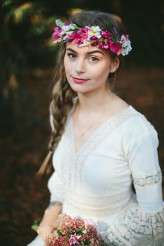 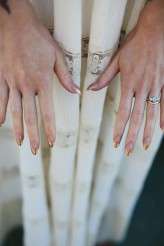