Over the next week I’ll be recapping some of my favourite posts from the past twelve months, so this is the last real wedding feature of the year! Er where has the time gone please?! But believe me when I say we are going out with a bang. Claire and Ste’s wedding is not only beautifully modern and glamorous, but the way it was photographed by The Crawleys has blown my mind. I love all this creativity and this wedding might just be the epitome of Rock n Roll Bride! 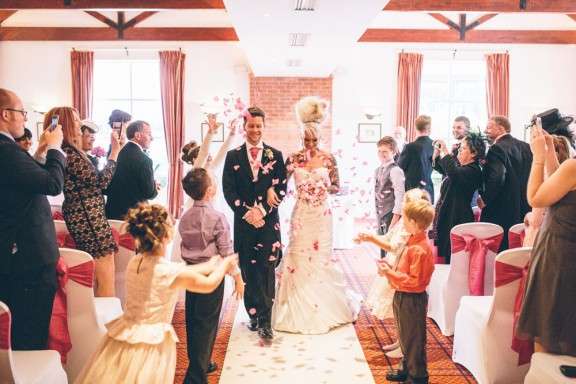 “We met while at performing arts college in 2000”, began Claire. “When we first met we couldn’t be more different. Ste was painfully shy and I was quite the opposite. However when we left college I was preparing to get married to someone else!!! We lost contact for a year or so but then reunited to form a band in 2003. I got married in 2004 and went on to have a baby in 2005. Ste had several relationships but our friendship remained strong throughout and he became my daughter’s godfather at her christening. My marriage fell apart in 2006. It was a very hard time for me but Ste was always there for me. As time went by our relationship grew into something else. That was 7 years ago and we are still madly in love with each other and better than that we are still best friends!” 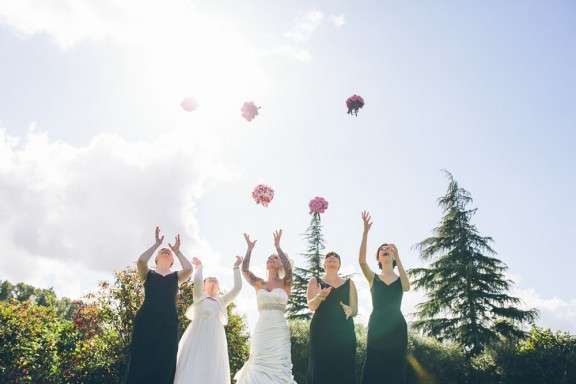 “We both wanted a wedding day that people went away saying ‘That was so Claire and Ste’”, she continued. “As I had been married before it meant a lot to me to do things differently. I had been very traditional the first time around and my parents had arranged and paid for my first wedding and this meant that things were done their way. This time we were paying for the whole thing ourselves and this wedding would be done our way! We both wanted the day to be a bit traditional but with quirks everywhere that made it very us.” 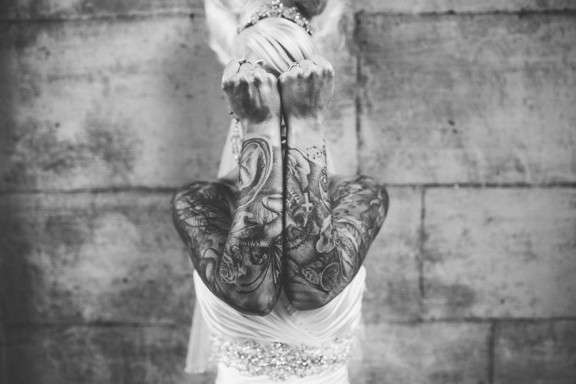 “As music features so heavily in our lives it was important for us to feature this in our wedding day especially rock music! We also had skulls on the tables and fish and chips as our evening meal! We chose a striking colour scheme, black and pink, and wanted to avoid pastels at all costs. I had always wanted my bridesmaids in black (despite the association with funerals and the macabre) and we decided the best way to avoid making the black look too heavy was to team it with bright pink!”

Claire wore a Sottero & Midgley gown and Iron Fist shoes. “I knew straight away that I wanted to wear something elegant, and something very fitted to accentuate my new figure (we had both recently just lost a lot of weight). While the dress ended up being quite traditional, I added some quirk and wow factor with my massive hair and rock chick shoes!” 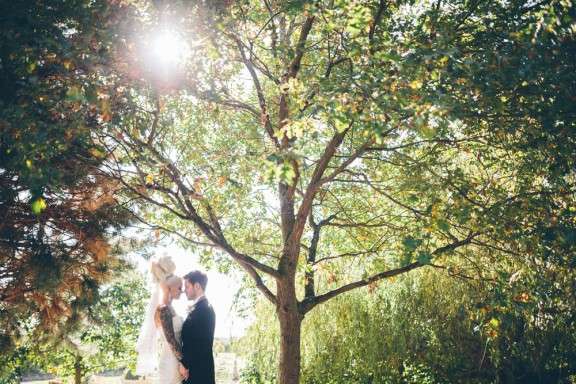 “One of the things we splurged on the most was our beautiful wedding cake. Whilst visiting a wedding fayre I found a cake decorator making the most individual the cakes I had ever seen! I knew straight away that I needed a cake like that at my wedding. We discussed our colour scheme and what makes us tick and we wanted our cake to mirror our personalities so it meant a lot to have things in it that would be so very ‘Ste and Claire.’ I certainly didn’t want a traditional 4 tier cake that could be at anyone’s wedding and I certainly didn’t get that! The cake was a work of art, it was 6 tiers of various flavours covered in sugar paste embellishments that mirrored details in my dress. It also had copies of my tattoos, had the words ‘till death do us part’ etched on it and was covered in skulls! It was breathtaking to look at and devastating to cut!” 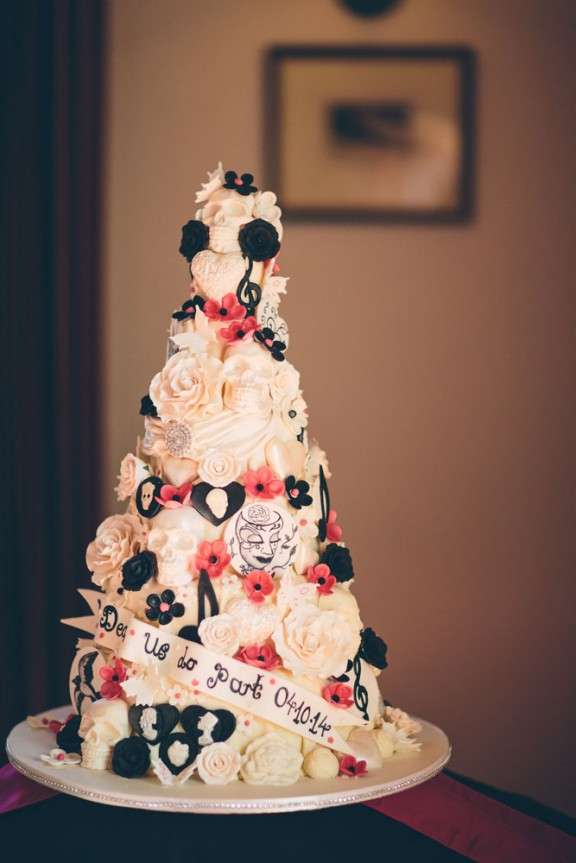 “Enjoy every minute of the day, and drag it out as much as you can”, Claire advises other couples. “Our evening reception finished at midnight and several friends stayed at the hotel and suggested going to the residents bar for more drinks. I was reluctant at first as I was very tired but then I realised, ‘Wait a minute, this is the only chance you are going to have to be the bride and wear this dress so enjoy these last few moments.’ It turned out to be one of the highlights of the evening. I completely relaxed, put my feet up on one of the sofas and chilled out with my friends until the early hours!” 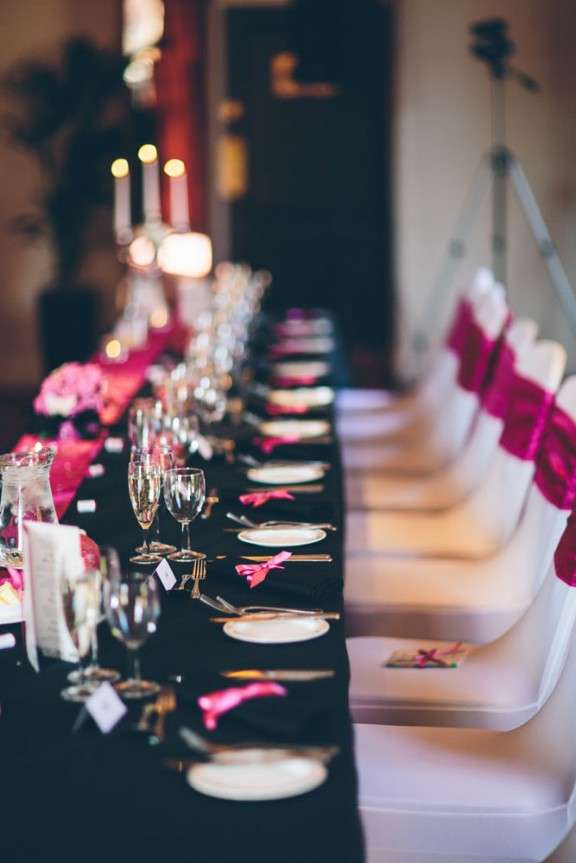 “Our wedding really was the best day of our lives”, she concluded. “We don’t regret spending a bomb on it as it really was a magical and special day that neither of us will ever forget. Knowing our guests enjoyed it as much as we did makes me very content with the whole day and happy that our friends and family could share with us this beautiful day. We really really wish we could do it again, totally the same, no changes at all. The day mirrored our relationship and our personalities perfectly and everyone we wanted to be there was there to wish us well.” 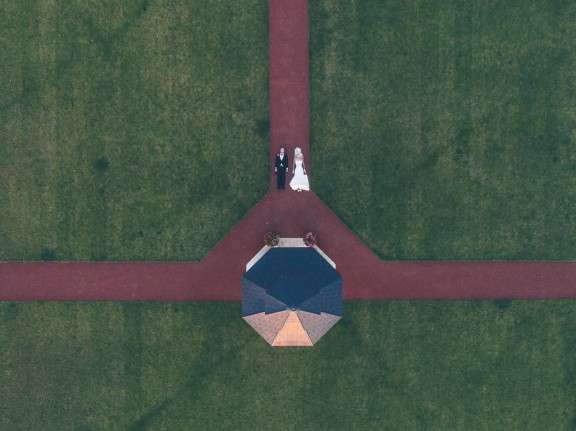 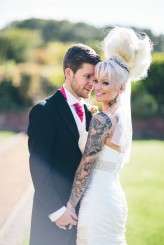 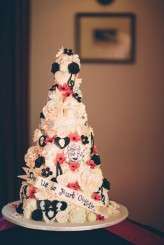 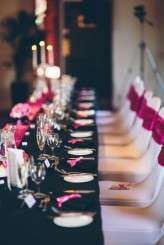 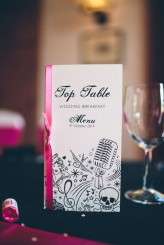 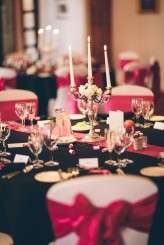 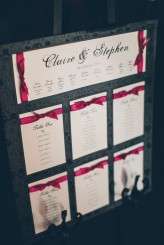 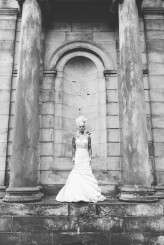 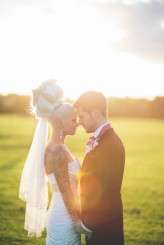