Iris Apfel, American businesswoman, interior designer, and fashion icon is a pretty amazing woman. At the ripe old age of 93, she still consults and lectures about style and fashion, and she continues to rock the same inimitable style that she became so well known for.

I might have said it to you a million times before, but looking at someone like Iris only reinforces my belief that you need to wholeheartedly be yourself. Standing out in a crowd is awesome, but in life (no matter how you choose to present yourself) you’re always going to come across people who are threatened, intimidated, offended or annoyed by you. You need to keep prancing along doing your own thing anyway. If you don’t, you’ll end up being a carbon copy of everyone else and just as bitter as the rest of them.

I’d rather people disliked me for who I actually am, than have them dim my sparkly light because it might – GASP! – offend their boring sensibilities. I already know my style, opinions and choices are going to annoy some people, so I might as well just be myself and enjoy life on my own terms regardless! 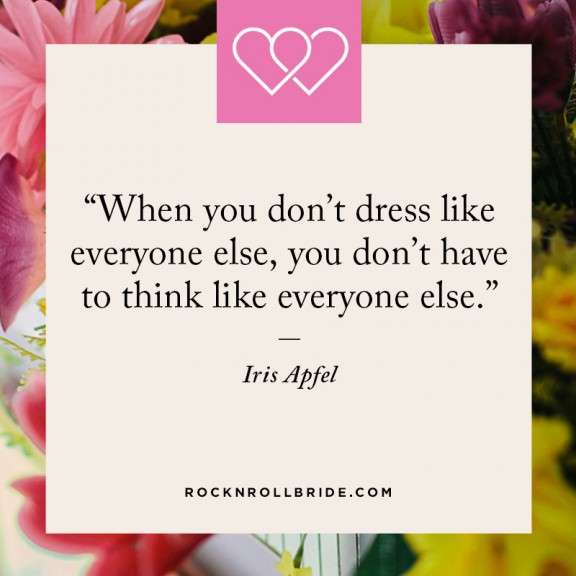 If you think about all the really successful people that you admire, I bet they’re not the ones blending into the background. David Bowie, Damien Hurst, Gus Van Sant, Wes Anderson, Kurt Cobain, Elvis Presley, Michael Jackson… they’re all weirdly unique and awesomely wonderful in their very own ways.

No matter how many grumpy fashion victims might turn their noses up at Iris Apfel’s eclectic style, I’d much rather be like her. I want to live loudly and shamelessly in a way that makes me overjoyed every day. I want to be colourful and creative and to not care what anyone else thinks.

My wish for you is that you do too. In doing that, we can show other people that is possible to be different, weird, unique and successful, and that they too can go out and live their own truth.