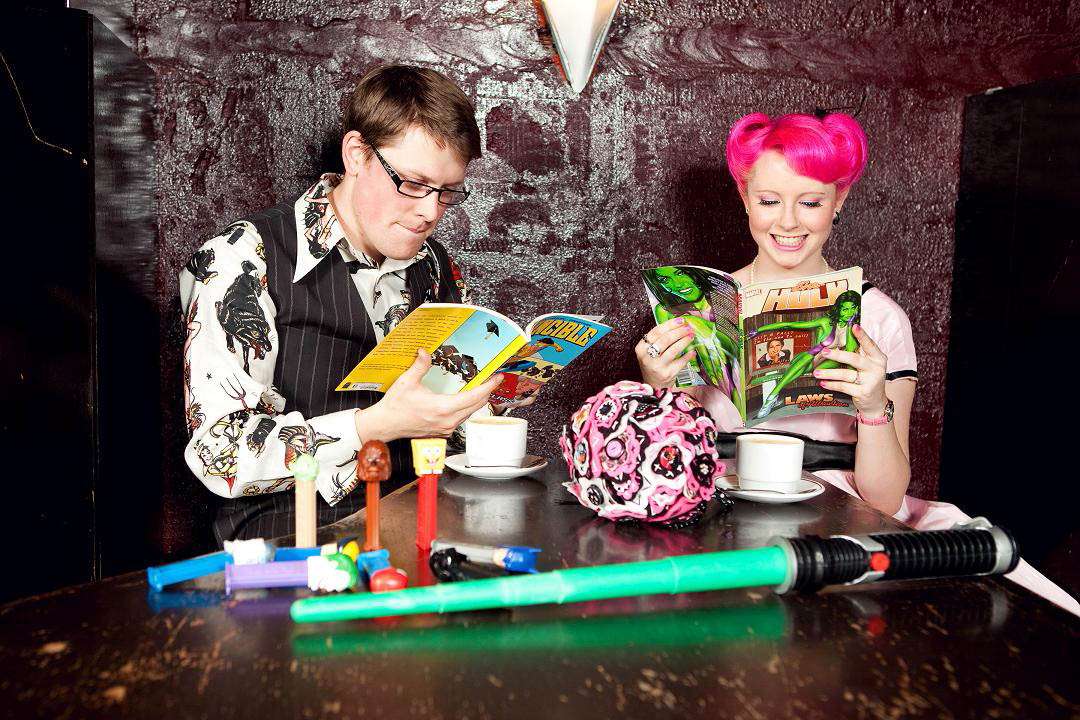 “Everyone said for me to wear white would be the shocking thing” the bride, Cazz, told me. “My dream was to look like a cupcake. A big pink cupcake. It had to be pink, black and with polka dots. My dress was purchased off eBay for $40. It was a used costume from Buddy Holly the musical! One of my lovely maids of honour altered it for me and added my dream large black bow.” 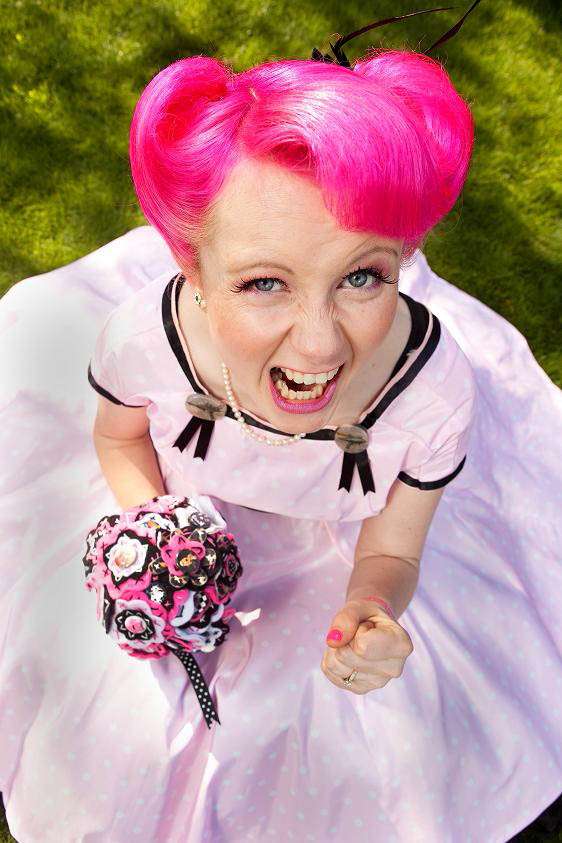 I think that Cazz’s dress might have helped to set the whole theme for her awesome wedding to Liam – a big pink cupcake of a wedding! Cazz wore shoes with cupcakes (and skulls!) on them and as well as a slightly more traditional tiered cake, which was gift, they had…you guessed it…cupcakes! 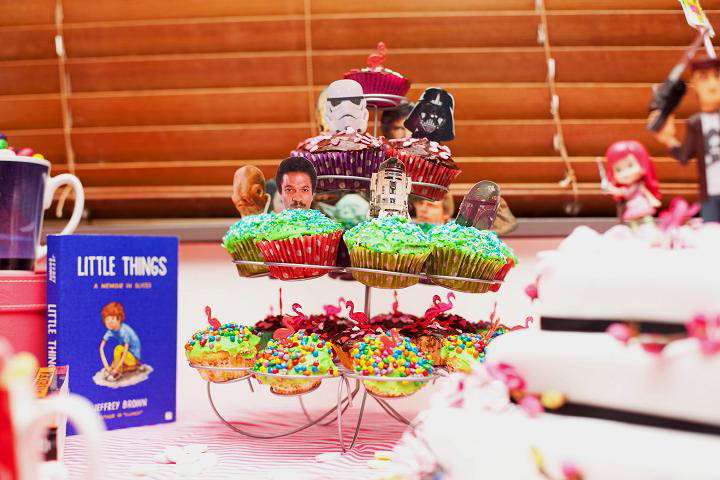 “The theme turned out to be Rockabilly/Tiki comic book geekery,” Cazz continued. “But in a sense the theme was ‘Liam & Cazz’. I wanted the world to see who we really were. At that time. I don’t care that if i’m 50 and think… “what was I thinking” because it was us. I wanted EVERYTHING that we liked to be represented in some way. All the comics that meant something to us were scattered around, hung in trees and read at our ceremony. Action figures of everything from Marv from Sin City to she Hulk were used as table decorations. Darth Vader attended my wedding and was featured on the bottom of the cake fighting zombies and covered in blood. Tiki stuff was everywhere and pink flamingos were used to represent film director John Waters.” 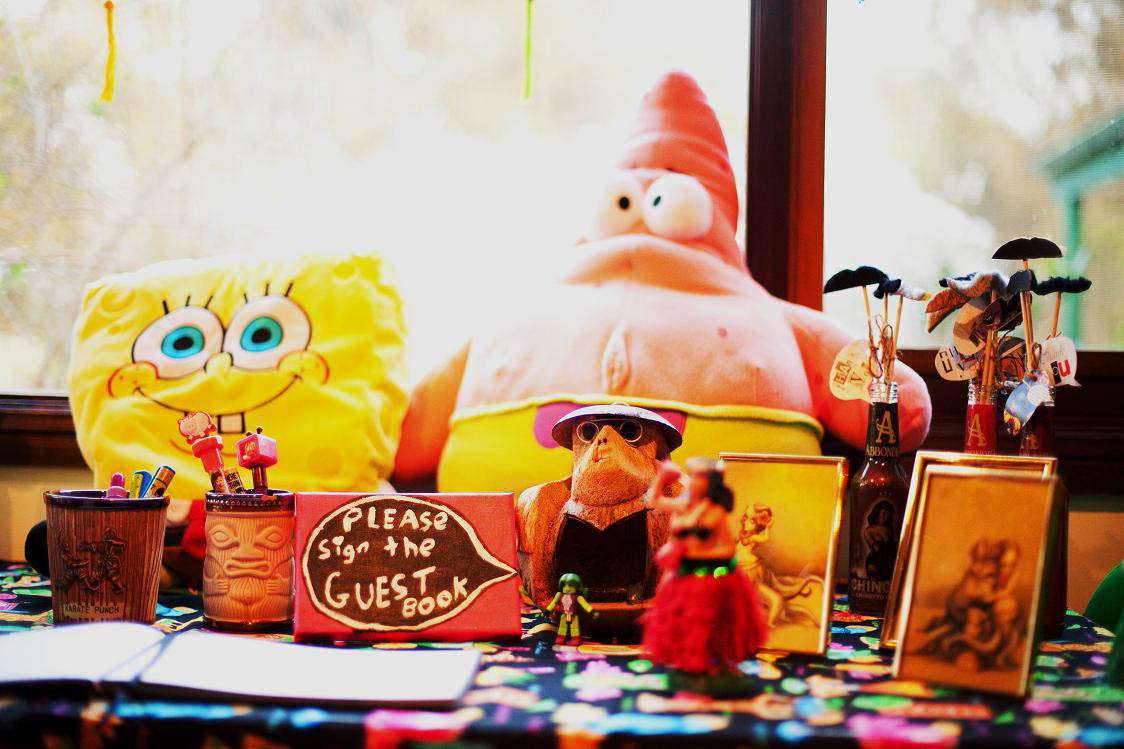 “I would like to end by saying, I know you hear it a lot; but it really is your wedding day. If your family and friends truly love you, they will get it.. all off it. And even if they are offended, it won’t matter because it’s not about them. I wore pink, had blood and zombies on my cake, had 5 bridesmaids, the dude of honour was a girl, walked down the isle to Kiss and showed all my tattoos. And the one family member I thought would hate it, could not stop saying how much love they felt. ‘Best wedding ever’ they said. And to us… it really was.” 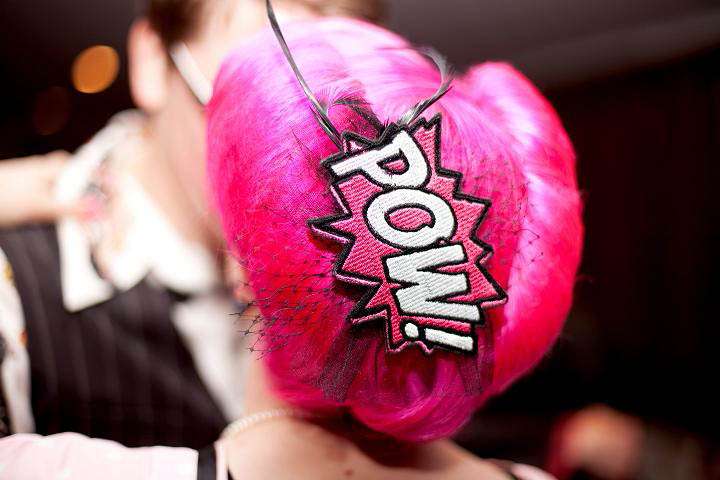 Lots of love to Cazz & Liam and huge thanks to them for sharing their awesome wedding with us today. 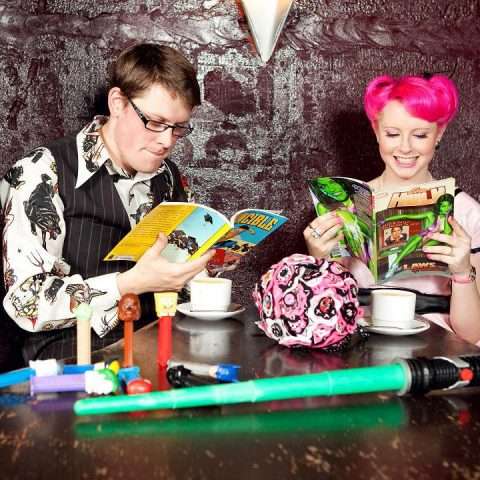 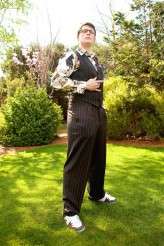 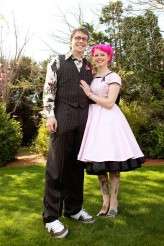 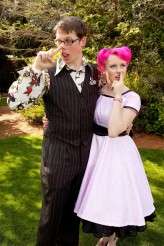 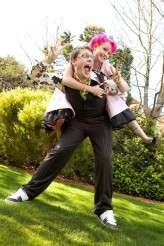 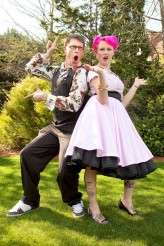 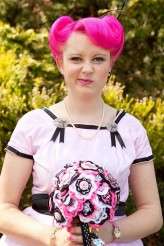 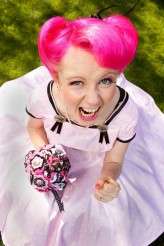 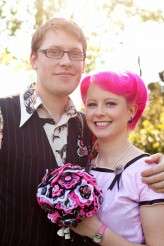 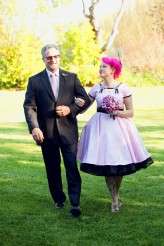 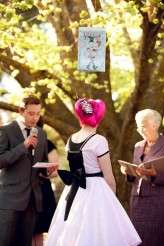 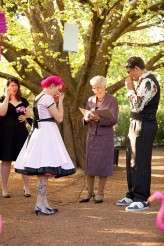 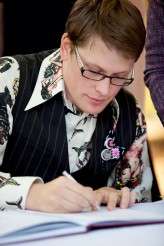 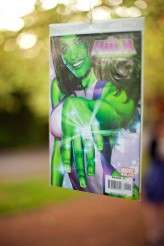 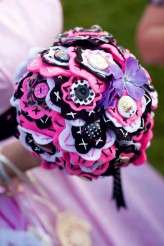 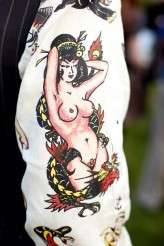 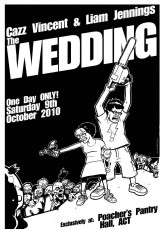 Off the Hook Carnival Eye Candy

I knew Amy & Jesse's wedding would be off-the-hook with it's intense awesomeness as soon as I saw and blogged their engagements a while back. Surely a couple this offbeat and rockin' couldn't have anything but a super crazy, kooky, inspirational and incredible wedding day could they? However, even I was blown off my chair when I laid eyes on these little beauties. Their DIY, carnival wedding was not only ridiculously creative and awe-inspiring but the couple themselves literally looked like a candy covered explosion of kick ass attitude and fun all over! (By the way I fully realise that my explanation of my thoughts on this wedding probably make little or no grammatical and linguistical sense - however my intense excitement over getting to blog these appears to have rendered by logical brain dysfunctional!) Got it? Right...on with the show... A HUGE Rock n Roll thank you to Marina of Red Heart Photography for sending these over. I couldn't wait to blog these (as always) and so the photos below are actually only part 1 & 2 of her posts. Go check out her blog over the next few weeks for even more eye candy!

A DIY, Heart & Confetti-Themed Wedding in The Netherlands: Laura & Nils

Laura & Nils were married at a vineyard in The Neatherlands. The laid-back nature of their venue was reflected throughout their entire day. It was important to the couple to put their own stamp on their wedding and so they DIY'd a lot of the details including the bride's dress, the favours (a sweetie table), the cakes and the flowers.