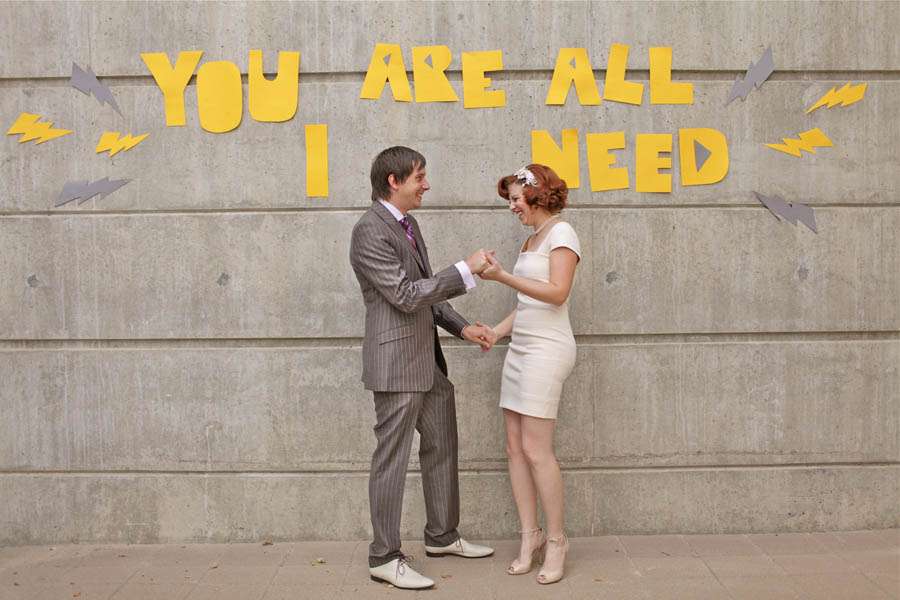 Tim & Jodie were hitched at The Natural Science and History Museum in Denver and I am more that a little bit in love with them and their wedding. Not only becuase Jodie looks fabulous and the venue is a beaut, but becuase the idea behind their wedding was to celebrate more than just their love for one another…they celebrated their love for everyone!

The couple explained, “We both agreed that the wedding was just as much about our friends and family as it was about us, so almost every detail was considered with our guests in mind. We looked at the wedding as our chance to throw an unforgettable party, and we definitely succeeded. It’s hard to put my finger on one particular detail that made it so great, but we heard, “Best. Wedding. Ever.” over and over again from guests, staff, and even the off-duty police officers who were working security. We tried to stick to a few basic tenets (emphasis on the “tried”) and they included: Don’t overthink it. Don’t worry about “the rules”. Don’t do anything just to impress someone else.  Do have fun.” 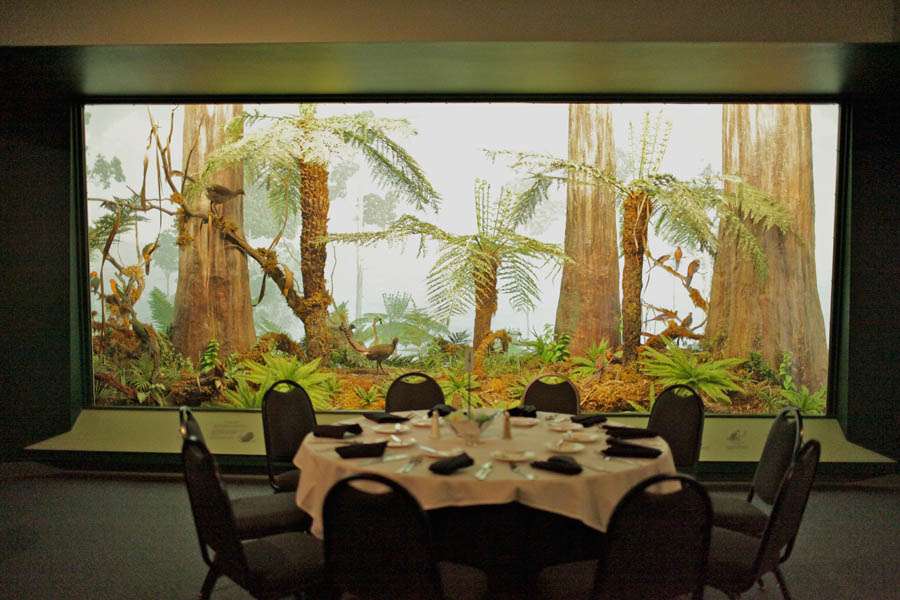 “Regarding the rules, we did little “by the book.”  Even our ceremony was far from traditional.  Our officiant was Tim’s former boss from Twist and Shout, a long-haired hippy named Paul.  Paul is, as he says, ordained through the powers of the internet, and our ceremony was not religious in the slightest bit.  Rather than having a reading from the book of [insert bible book here] we chose to have a reading from “the book of Starship.” Before exchanging vows, Tim’s brother and Jodie’s college best friend took turns reciting the lyrics to Starship’s Nothing’s Gonna Stop Us Now.  Besides being one of Jodie’s karaoke standards, the song had the right amount of familiarity to make people smile and feel “in” on the joke, and yet the lyrics to the pop tune took on a new meaning in the context of a wedding ceremony.” 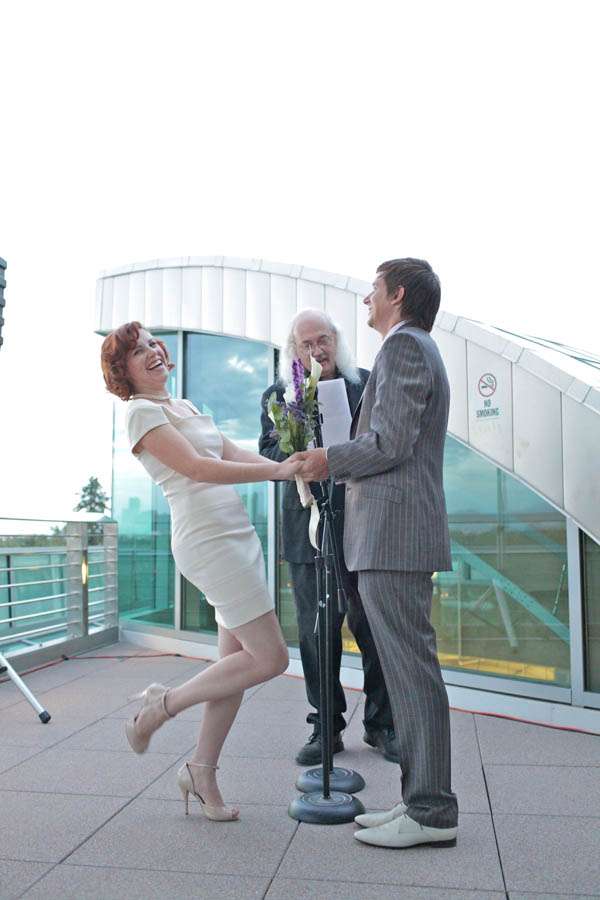 “We have a lot of gay friends and are both keenly aware that they are denied the right to engage in a legally-binding ceremony such as ours, and we wanted to be mindful of that and have our wedding be as inclusive as possible.  To achieve that goal, we registered with the Human Rights Campaign’s marriage equality advocacy division as part of our bridal registry, and it was great to see so many people donating money to their cause on our behalf.  And, in another break from tradition, we asked our officiant to read an excerpt from the court decision early marriage equality case – Goodridge v. Dept. of Health. The judge’s decision considered marriage as fulfilling yearnings for security, safe haven, and a connection that expresses our common humanity.  Tim’s a recent law school graduate, and focused much of his studies on the rights of sexual minorities.” 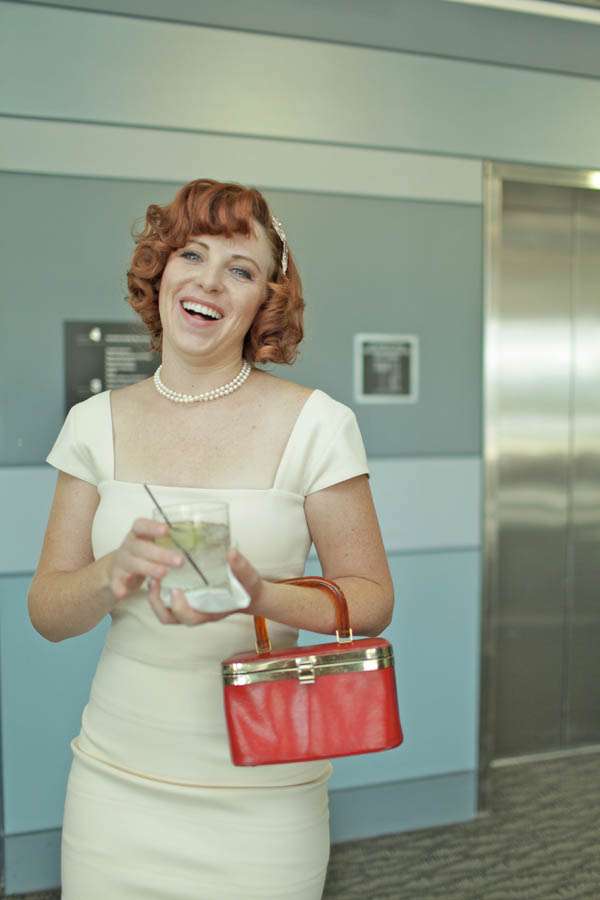 Jodie wore two dresses. The first, a sexy body-con number by The Row and the second a sheath dress by Dolce & Gabbana – she bought both on sale at an outlet mall! “I consider myself a pro bargain hunter – both dresses combined cost me less than $500,” she continued. “I never imagined that I would wear anything remotely resembling a wedding dress in color or design, but both of these dresses jumped off the rack at me. Plus, I liked the touch of slut factor in the tight short dress by The Row. Neither of us wanted to break the bank on items we would never wear again, and so we both went for pieces that didn’t scream “bride and groom”. I will wear all items again and again. The second pair of shoes were the ubiquitous Vivienne Westwood jelly heels. The pearl necklace was Tim’s mom’s necklace that she made herself by adding pearls to throughout the years as her budget allowed. She passed away in 1998, so there was no doubt that it would be worn at our wedding in her honor. I made the red and turquoise beaded necklace, again, because I am a cheap date.” 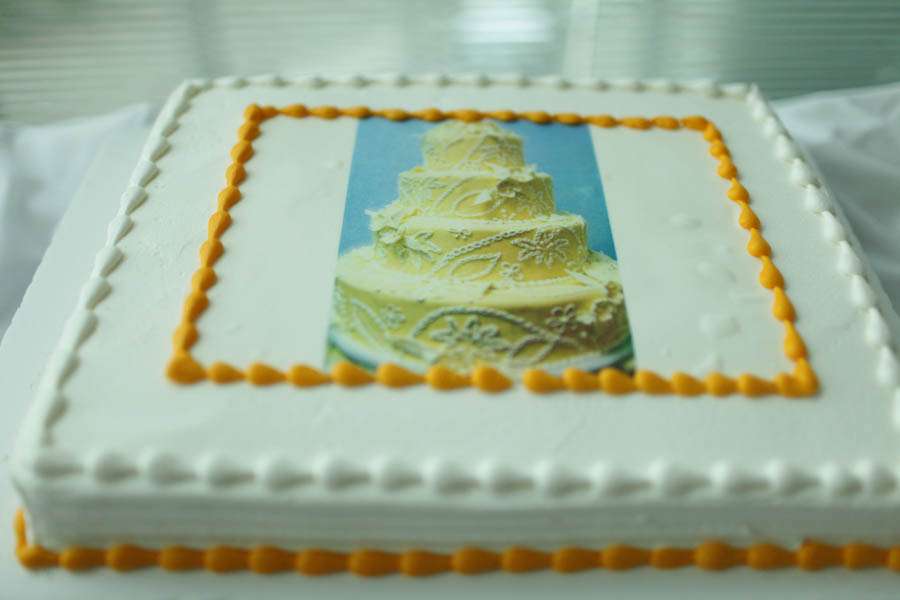 The unusual wedding cake was also a talking point at the wedding. I’ve personally never seen anything like this but I think it’s a great (and funny!) idea for those on a budget, “The cake was another expense that we thought could easily get out of hand. We thought about all the weddings we had been to where guests don’t even touch (sometimes don’t even see) the cake, yet the couples had probably spent a fortune on them.  In order to avoid this happening at our wedding, Tim came up with the idea to screenprint an image of one of those fancy cakes on top of a sheet cake from Safeway. We ordered three sheet cakes, each with a variety of fillings and frosting, and called it a day. My sister picked the cakes up at her local grocery store, and happened to know the woman working behind the counter…she gave my sister a discount. We were charged $10 each for three cakes.” 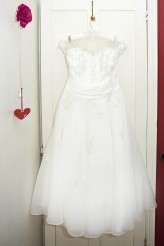 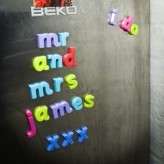 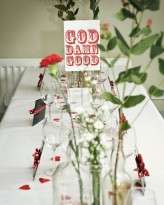 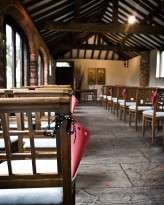 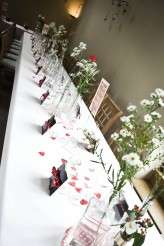 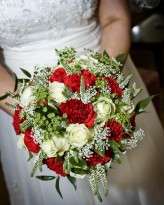 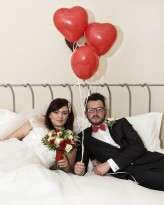 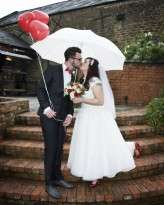 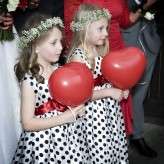 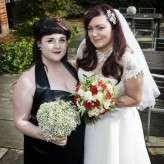 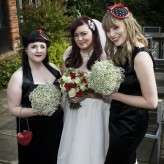 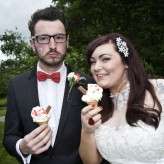 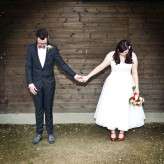 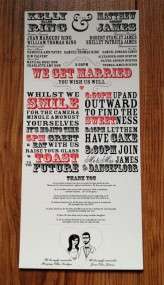 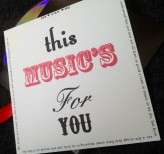 Fay and Michael met in the most bizarre way - they were set up by Michael's ex-wife! After 10 years together they decided to get married and wanted their wedding to be an eclectic mix, representing all of their passions and loves. They included ballroom dance, costume, circus, art, festival, sugar skulls, Tim Burton and vintage influences. They also wanted it to be an opportunity to show off their creative artistic flair to their family and friends.