This girl has got some wicked style! Gotta love the Hollywood glamour/Japanese fusion of her whole outfit, from the shoes to the veil to the dramatic black sash…
If you too are planning a black, white & red themed wedding, you have absolutely got to check out the rest of the wedding details. Gorgeous and inspirational! 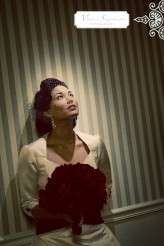 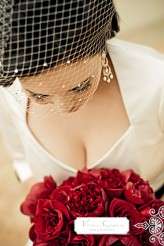 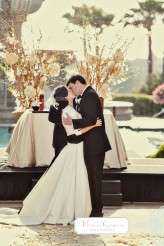 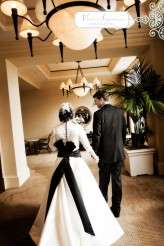 All the Luck of the Irish

You might remember Maggie & Sean from their rockabilly engagements in an Irish pub. Well photographer Karen Lisa just sent me their wedding, which rocks just as hard! The wedding ceremony was held at a small park across from the couple's apartment in downtown Boca Raton and the reception was at the Spanish River Library outside on the terrace. For wedding favors, Maggie & Sean had custom labels made for their favorite Irish Cider, Magners, and they created a replica of their favorite pub to serve as the bar. At one point the couple even got behind the bar to tend and serve drinks themselves. The guests had a blast! The music was played by a rockabilly band, Slip & the Spin Outs. Aaron's Catering of The Palm Beaches provided a unique menu of 50's diner style food made elegant - mini slider burgers, lobster rolls, grilled cheese sticks in a mini martini glass, and delicious desserts. The cake was designed by a friend of the family and featured the bride and groom enjoying their Magner's Irish Cider - complete with tiny bottles and labels. It was one of the most unique and personal cake toppers I've ever seen! Thanks to Karen for sharing this fabulous wedding with us today