Why happy Sunday one and all. I trust you’ve had a fantastic weekend so far? I thought I’d just pop by this morning to give you a few Blogcademy updates because it’s all go go go over here!

After we wrapped NYC and got the photos, video and some pretty awesome testimonials from all of our lovely graduates (we love you!) Shauna felt that the website could do with a bit of an overhaul. I swear to God that woman doesn’t actually sleep. Ever. One morning I woke up to an email from the lady herself saying “So girls, I must be mad cos I completely redesigned the website over night!” Now, mad she may be, but oh so bloomin’ talented as well. We love you babe.

The new design isn’t a radical departure from the original but it’s been freshened, polished and new sections have been added. There’s new pages for testimonials, to announce new locations (seriously, watch this space eek!) and to invite sponsors to get on board. And talking of sponsors we’re still on the look out for goodie bag items for London so if you make something cute and you’d like to get it in front of 70 enthusiastic bloggers AND get it featured on all our blogs then get in touch!

Poor Gareth then had to code the whole thing in a weekend but needless to say he did an awesome job as ever. What a dream team! 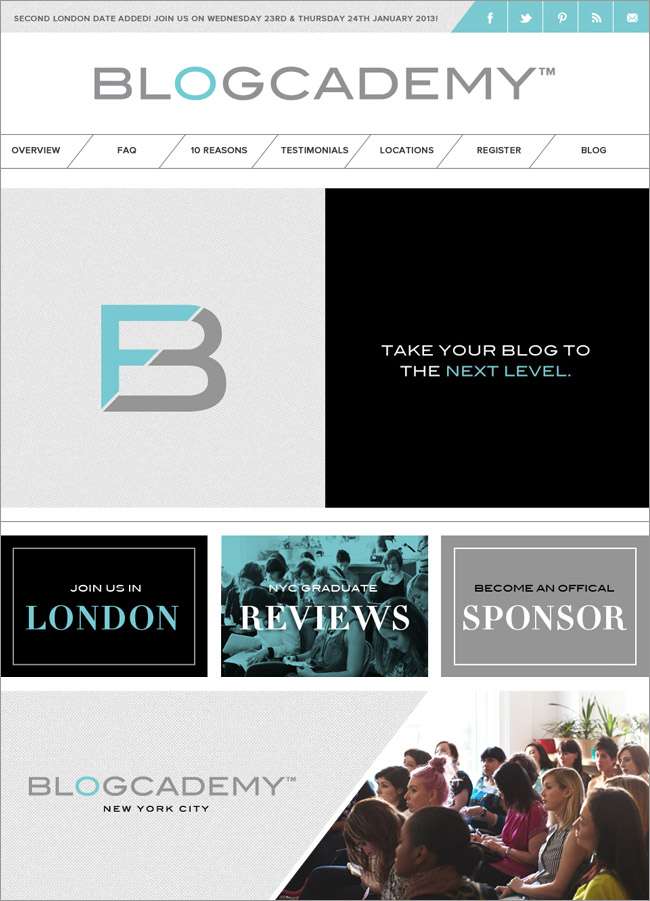 In other news it was the closing date for scholarship entries on Friday, and after a last minute flurry of applications, the other headmistress and I debated back and forth until we picked our winner. It was tough decision (SERIOUSLY) but I’m super excited to report that the lucky babe who has won a free spot is… PENNY!

YEY! We love your video and we can’t WAIT to see you in London!! There were so many awesome applications so you simply have to go and check them all out on our facebook page!

And finally, we still have a few spots left for the second London workshop on 23rd & 24th January. If you’d like you come and learn with us then don’t delay, book your spot today!

I'm currently lying in bed in my East Village apartment (well, I wish it was mine!) with Nubby the day after the first ever Blogcademy. It's 7am and we're both bolt upright excitedly gabbing about the events of the past 48 hours. It was a weekend of magical, unexpected, positivity and excitable exhilaration. Loving, learning and inspiring each other - all in our own imitable fashion. I feel mentally exhausted and my feet hurt like hell but it's oh such a good feeling. Our 30 attendees were just what we hoped & prayed for and more, and I honestly feel we've all made some new BFFs for life.