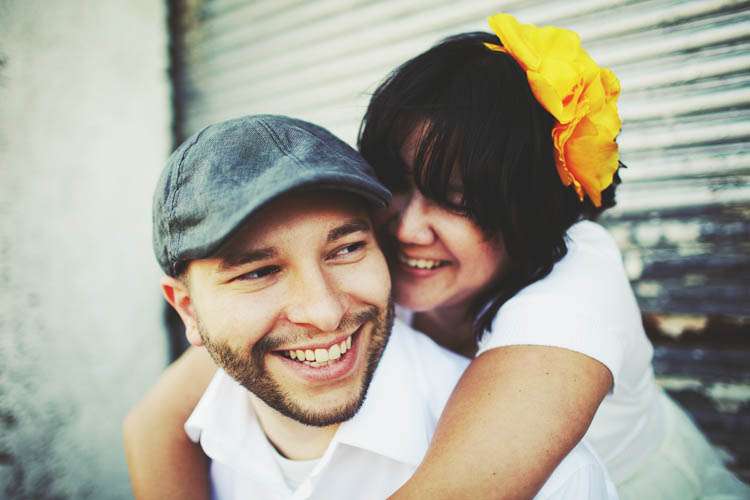 “We had two requirements for our wedding day: that it be in our favourite season of autumn and that it be just the two of us,” explained newlyweds Kevin & Shawna. “We’re both a little uncomfortable with a ton of people showering us with attention, and we knew we would not be happy with a traditional wedding. It was important that we be able to focus on us and only us…to have that intimacy. Our families were not initially thrilled, and we considered many possibilities of changing our plans because honestly, we were feeling guilty of depriving them of witnessing our wedding day. Yet every time we thought about planning a traditional ceremony and a reception, we quickly lost sight of what we were doing and why. It became more about making everyone else happy, and we were becoming more and more miserable and stressed out, and that’s NOT how we wanted to start our lives as husband and wife. So, we stuck to our guns and did what we wanted! We’re also so freakin’ Rock n Roll that we shot down an after-honeymoon reception idea. We admit we’re being selfish, but we have a lot of stuff going on in our lives, and we want to focus on us and building a solid foundation to our marriage. In lieu of a reception, we’re thinking of throwing a one year anniversary party because what better way to celebrate a marriage than by actually getting through that first year together!?” 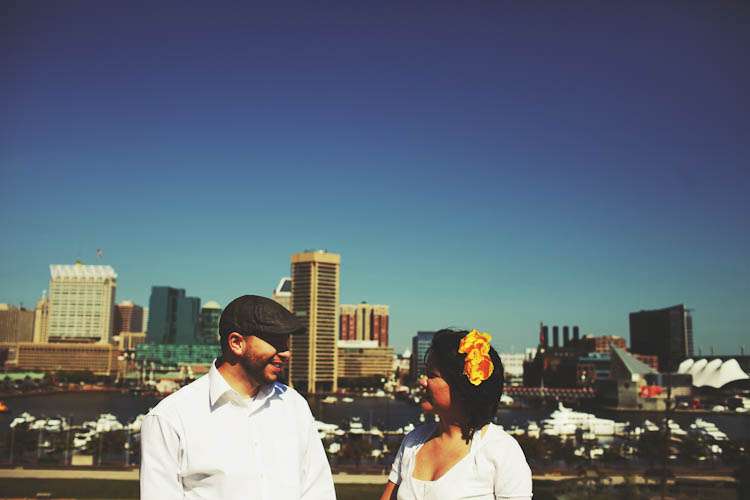 The ceremony took place at the top of Federal Hill Park which overlooks the Inner Harbour, “It was very fitting for two history nerds” the bride laughed. “It turned out to be a beautiful day, although quite windy! We had a simple, quiet ceremony under a tree while there were children playing at the playground and high school kids from a nearby school watching and cheering as we kissed! Luke then drove us to a more urban, gritty setting in Baltimore for a short photo shoot.”

Shawna wore a dress she was lucky enough to find on sale at the last minute at a local department store, “I love clothes and more importantly SHOES, but I loathe shopping. I couldn’t find a dress I liked online that didn’t cost a fortune or that I could get in time (I waited until the last minute!), so I grudgingly went to the mall a few days before we were to leave and found the cutest, short white dress I could find off the rack in a department store. Bonus of my procrastination: my dress was on sale and cost $35 AND it was super comfortable.” With this she wore super cute red pumps and a gorgeous yellow fabric flower headband in her hair. 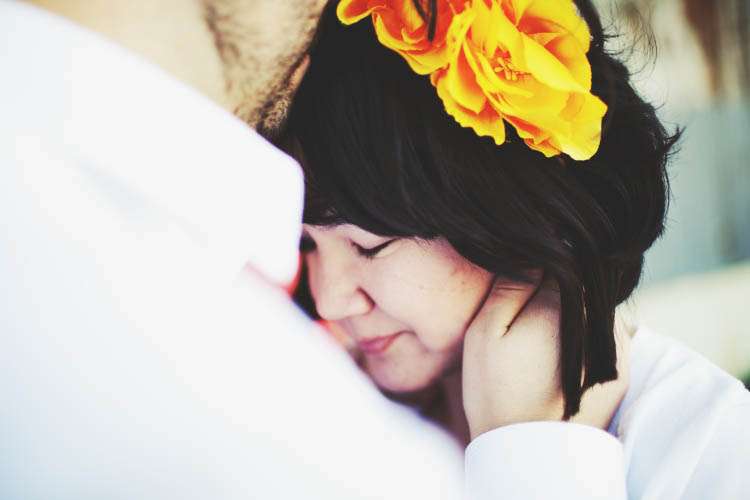 “After we landed in Baltimore, we had an hour to spare before meeting our officiant and photographer,” continued the bride. “I’m not sure if I’m the only bride out there who’s gotten ready for her wedding day in an airport restroom, but I have to be in the minority here! I went into the restroom wearing jeans, a t-shirt and a hoodie and wearing no make-up at all and came out a half hour later all dolled up that Kevin did a double-take because he didn’t recognize me at first! And I’m so happy I didn’t waste any time on my hair and let it do its thing and just slapped a headband on my head…the wind was crazy!”

“Our day began at 4 in the morning, and in the span of about nine hours, we drove to the airport that was about two hours away, waited… hopped on a plane for an hour flight, changed clothes and tried our best to make ourselves look good with the airport restroom facilities, grabbed a taxi for a half hour drive to Federal Hill Park, got married, ran around with Luke (our photographer) for about an hour, and after he dropped off us off at the cruise terminal (I told you he was amazing!), we stood in line to board the ship. We then found food!” 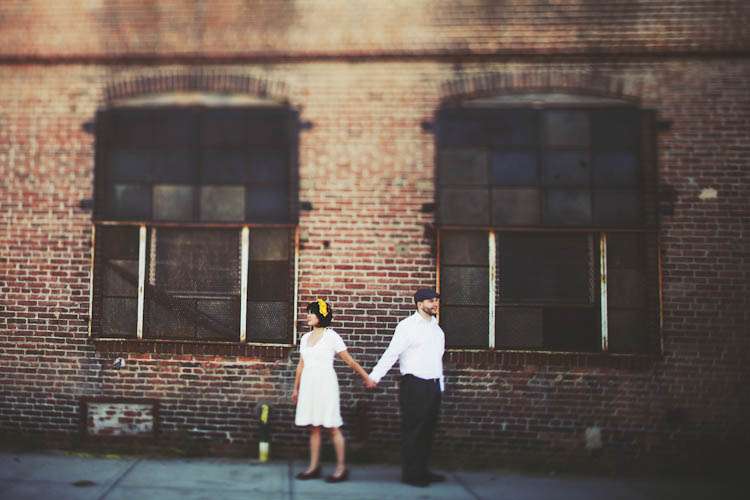 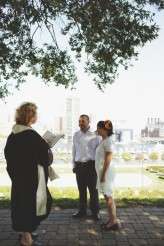 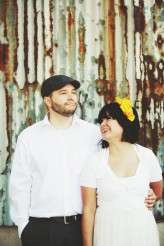 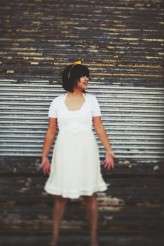 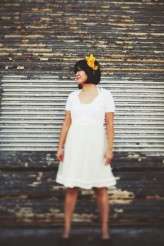 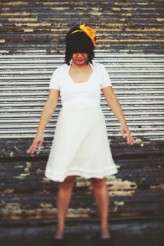 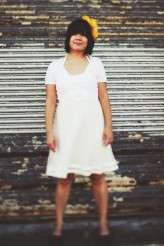 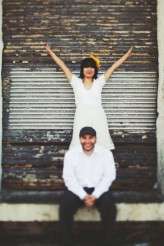 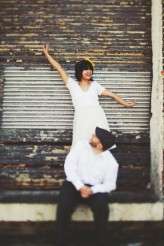 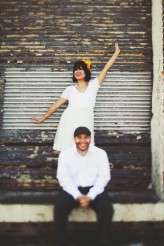 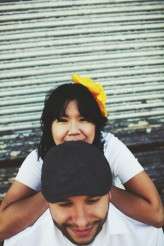 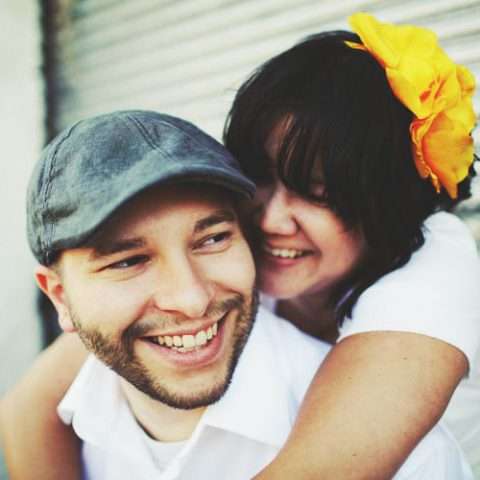 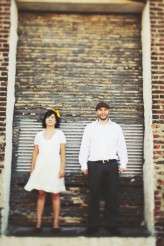 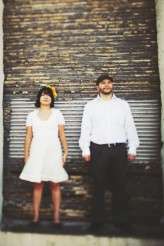 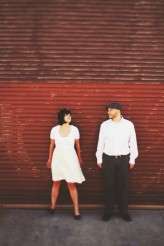 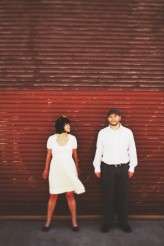 In the most part Italian weddings are undeniably beautiful - the landscape, the buildings and the effortless chic of the people. Huge and family orientated traditional weddings are big business in Italy, with alternative or quirky nuptials being a rarity. So I was thrilled to receive Mariangela & Ignazio's quirky Italian wedding recently - I love to show both sides of the story after all!