I just got back from meeting out wedding photography competition winners with my friend and photographer David McNeil. Vana & Damien are even cooler in real life than they are on paper. We got on like a house on fire and spent about 2 hours chatting non-stop!

I knew Vana and I would get on as we have chatted on the phone a number of times (for like an hour at a time…we’re both big chatterboxes apparently!) but it was great to meet them both and to see how excited they are about their upcoming wedding. The couple have some amazing, unique and totally rock n roll (Damien is in a band after all) ideas and I can’t wait to see them all in November.
So…my next task, my wedding outfit! To hat or not to hat?

We will be meeting the couple again in the next couple of months for their pre-wedding shoot, hopefully including some shots in the S&M Cafe! Didn’t I tell you they were bloody cool?

Here we all are drinking wine in the middle of the day and chatting all things wedding, and the photo of David – I took that..I’m pretty sure I’ve missed my calling!

ps if you want to still enter the contest to win the gorgeous little diamond necklace, you have one day left. Contest will be closing midnight tomorrow and I will be drawing the winner on Sunday..so get your nominations in if you want to be in with a chance! 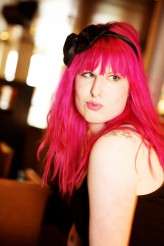 "I got married in August", said pink haired Blogcademy attendee Charlotte after the workshop was over. "Your blog was a huge help so thank you." "Amazing, I responded - make sure you send me your photographs!" And she did, and oh boy am I glad. What a wedding! "Our wedding theme was decided on a drunken weekend in Palm Springs in May when we were on a work trip", Charlotte told me. "We ordered 50 pink plastic lawn flamingos to be delivered to the Ace Hotel… then panicked when they arrived and we had to buy four huge holdalls to take them back on the plane! I was convinced customs would think we were smuggling drugs and cut them all open but they really made our wedding!"

British babe Nicole met Canadian Jon at us stop in Byron Bay, whilst both travelling in Australia in 2006. He was a skateboarder and so she tired to impress him by going on it... he nudged her and she broke her ankle! Far from being a disastrous first meeting though, Jon then changed his travel plans to be with her, aww!