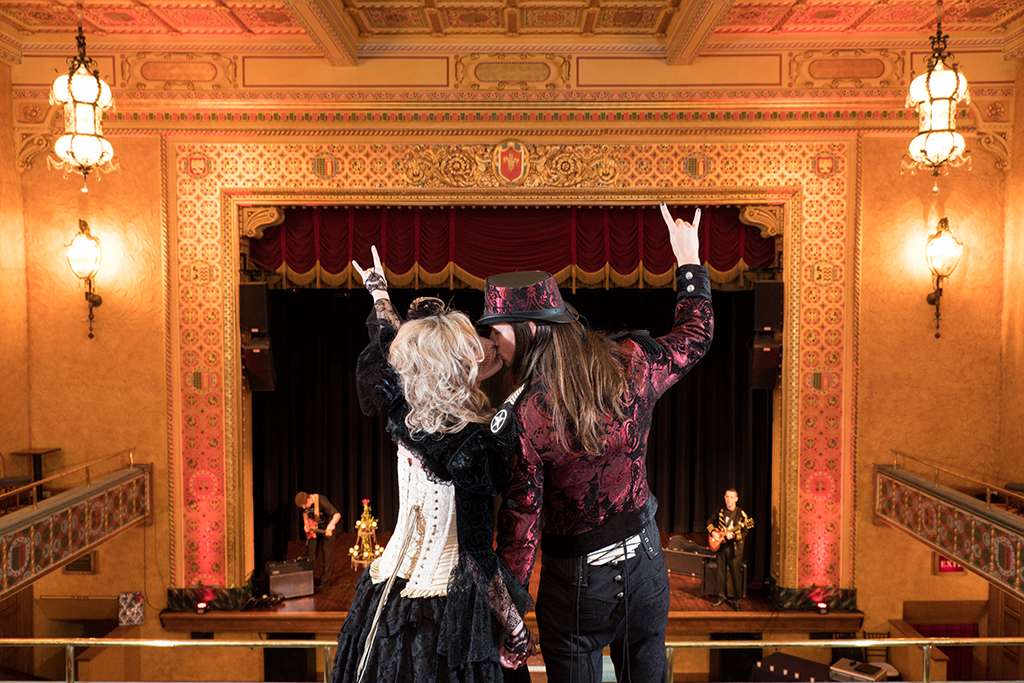 Alex and Ashley are bonafide rockstars through and through – even their engagement was Rock n Roll!

“We were travelling home from the first of eight weddings we were attending in 2017, and had spent the whole day joking about how awesome it would be to do a heavy metal wedding; what plans we’d make and touches we’d have to make the day inspired by us,” explained Ashley. “While we were doing a touch of dream shopping before the flight, Alex fell in love with with a jacket that fit him perfectly. I told him he had to get it and he responded ‘The only way I’m going to buy this is if you promise me I can wear it down the aisle in our Rock n Roll wedding!’ I told him that would be fine by me… a couple of tentative ‘OMG are we really going to do this?’ moments later and that was that, we were engaged!” 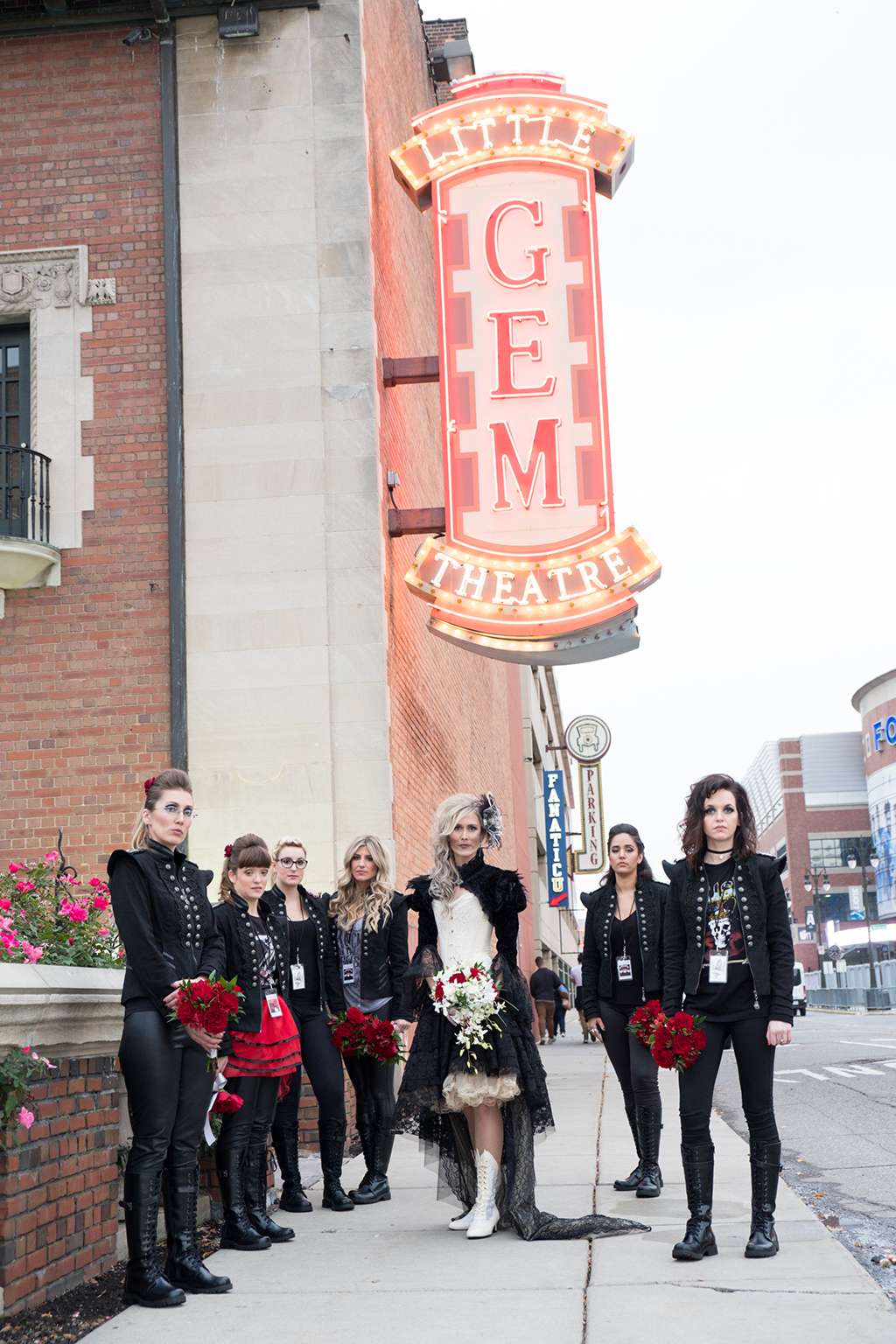 They picked their outfits out then and there and that sealed the deal. On the plane ride home, they composed the entire ceremony and music. Within a week they had a venue and their completed outfits. They decided to have the wedding in the same October, which gave them under five months to plan.

The inspiration for their day was music, of course. They based every decision around creating a high-end concert atmosphere. They both love dark/romantic themes which go hand-in-hand with Rock n Roll history, and were particularly inspired by 80s heavy metal.“We wanted to feel like rock royalty!” they explain. 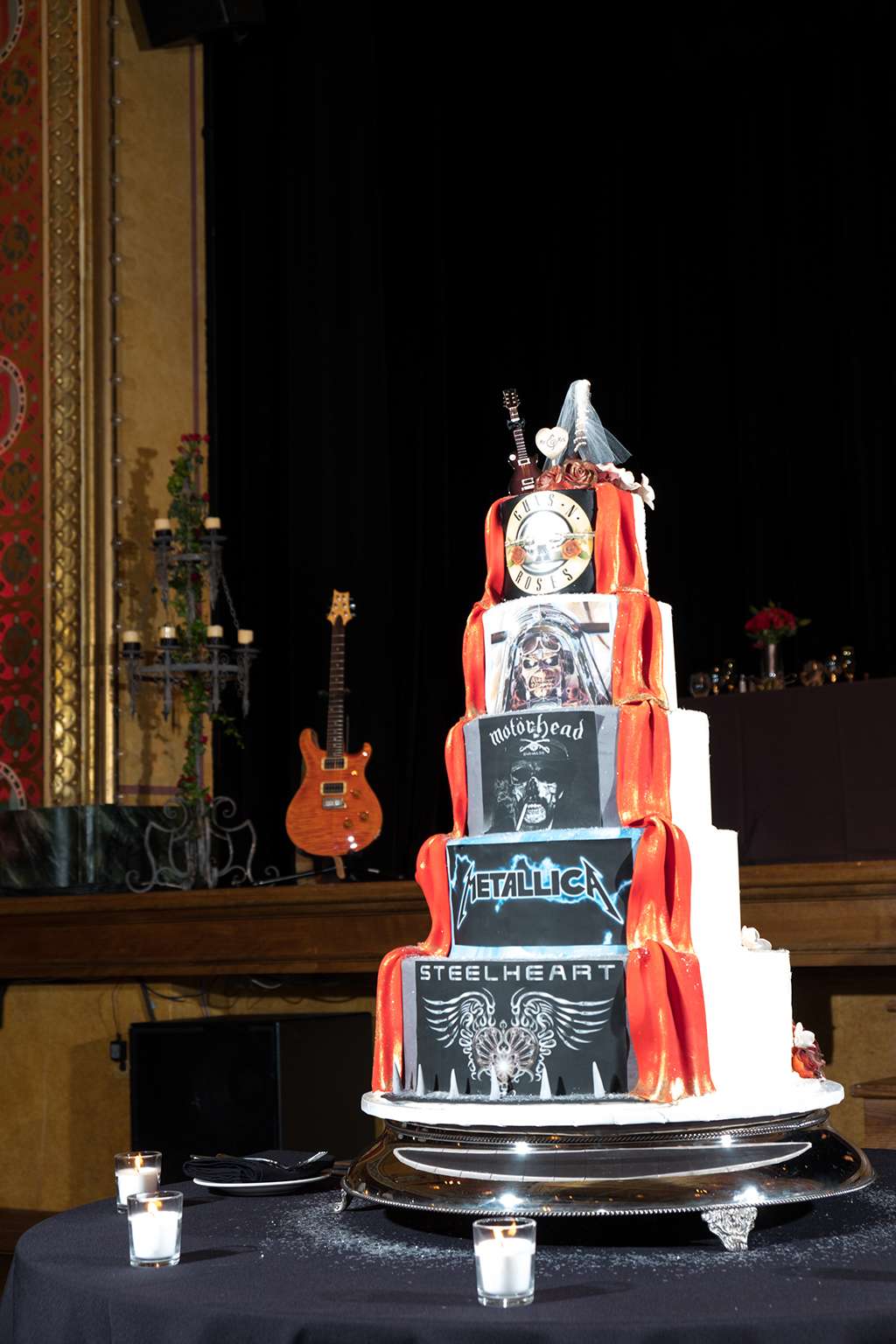 Their ceremony started with their guests arriving at their theatre venue, receiving backstage pass lanyards and being ushered onto the balcony. As the lights went dark, a medley of the couples favourite songs played, from Number of The Beast by Iron Maiden, to the groom walking out to Mr Crowley by Ozzy Osborne, followed by the groomsmen to From Whom The Bell Tolls by Metallica. 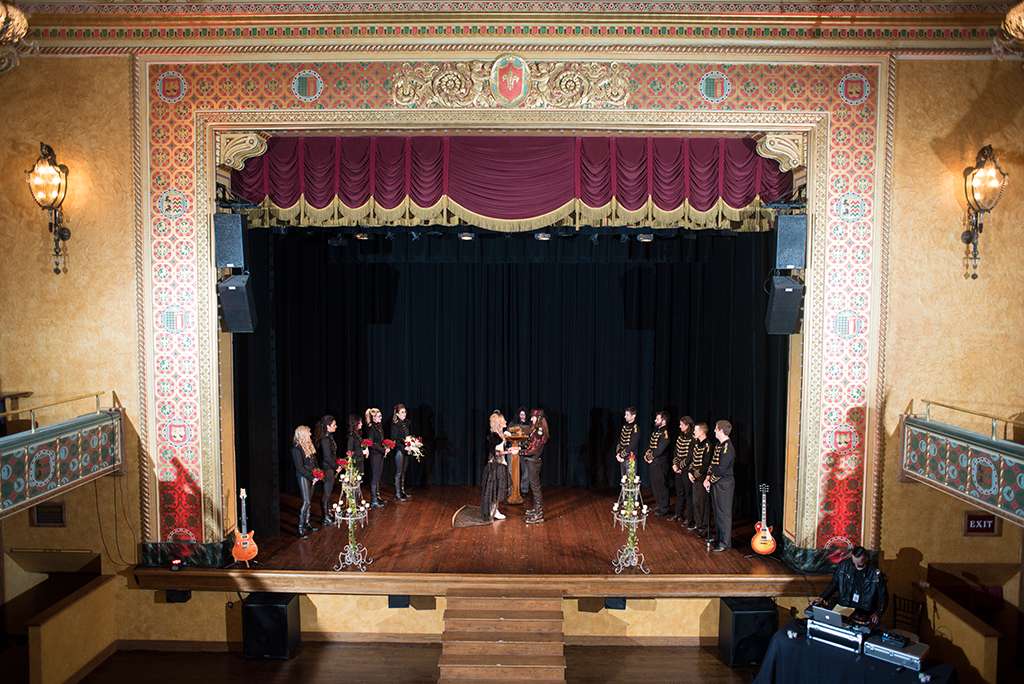 The bridal party were accompanied by Foxy Lady by Jimi Hendrix, lastly I’ll Never Let You Go by Steel Heart accompanied Ashley on her bridal walk. Their ceremony was conducted by Alex’s uncle dressed as Ozzy Osbourne, with hand written vows that they’d based on lyrics, songs and bands. After sealing with a kiss, they rocked off stage to Detroit Rock City by Kiss and cheers from their guests. 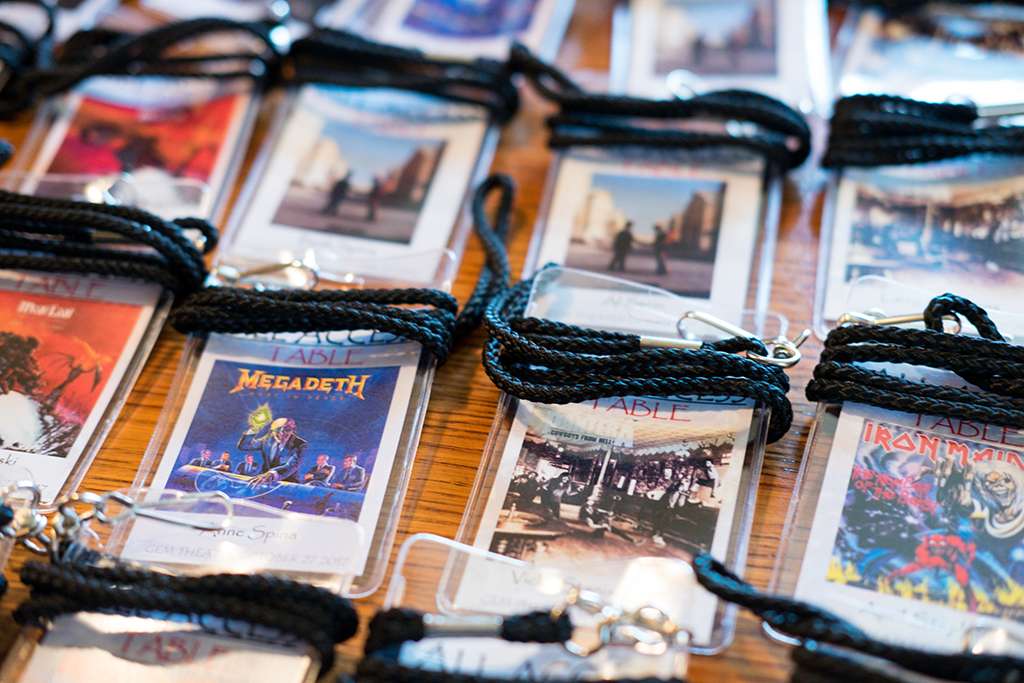 After cocktail hour, their guests moved downstairs in the theatre for dinner, where they had to match their backstage pass cover to the vinyl on their table. Each one was decorated with a classic rock vinyl, black candelabras and skull decanters, red roses and petals.

They had custom guitar picks as party favours, a handmade spiked card box and an incredible metal themed cake, which they cut before giving away best costume prizes to their guests – Ashley’s 85 year old grandfather dressing as Ted Nugent requiring special mention. 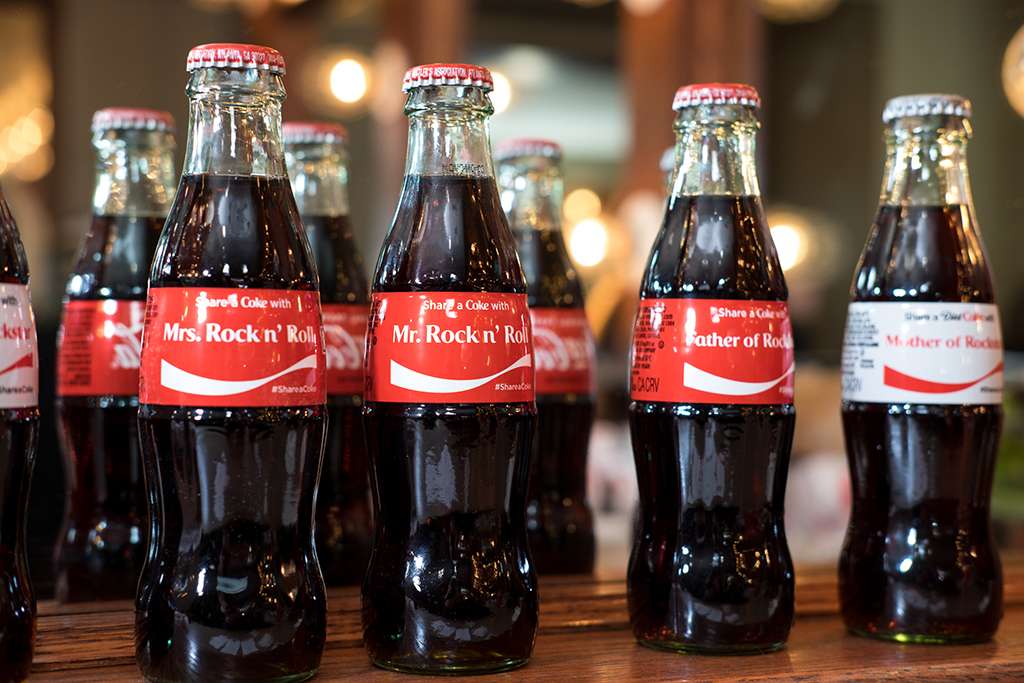 There was absolutely nothing Alex and Ashley would change about their day, and loved it so much they’re already planning to renew their vows in ten years’ time! “We’re going to have a ‘reunion tour’ and have the same party and everything! We can’t wait to continue rocking through the years.” 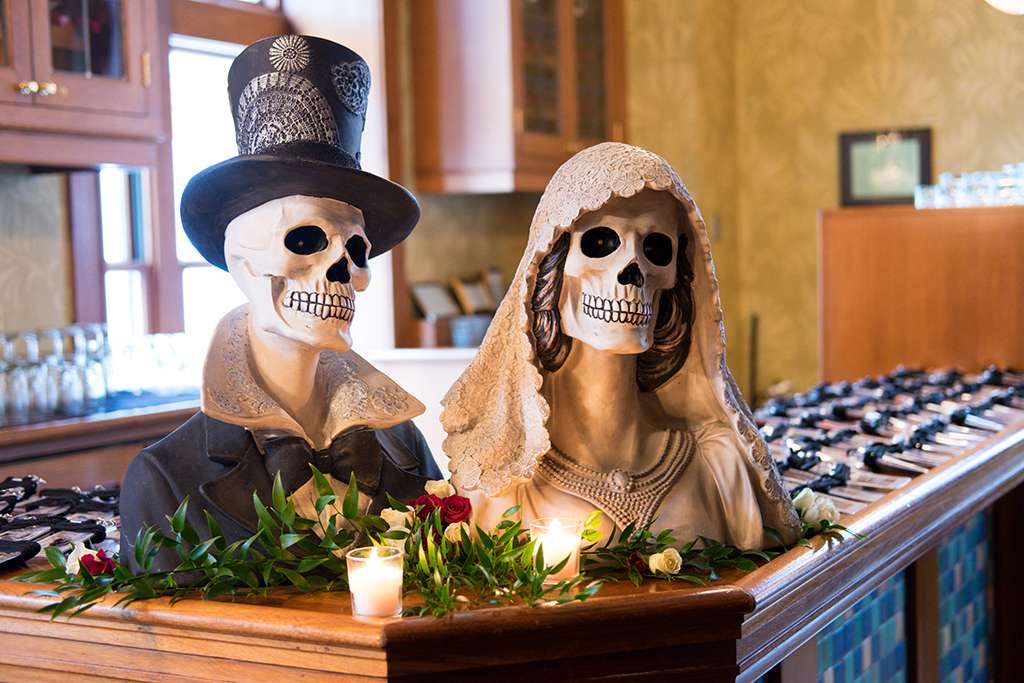 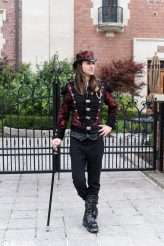 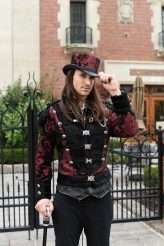 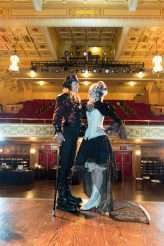 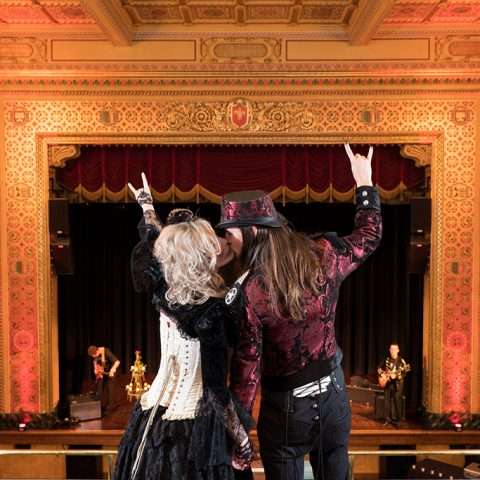 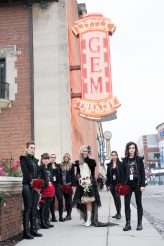 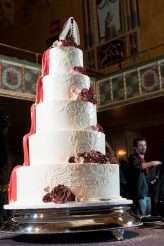 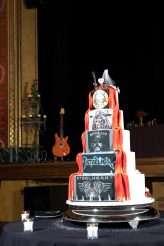 Sara and Gigi combined their mutual passion for motorcycles, 80s hard rock and heavy metal music to create their wedding theme. Married in Mantova, Italy, they created their wedding to feel just like a festival or biker party. A friend who is a graphic designer created their unique wedding logo which they then used on the cake and stationery. Their table plan was a denim jacket with patches on the back, just like a biker would wear!

One of the main reasons I love Filipino wedding photographers MangoRed so much is because their wedding photography is quite odd. In fact it's darn right bizarre. It breaks boundaries that I didn't even know existed, and it challenges my concept of what wedding photography even is. These images aren't going to be for everyone. In fact I'd bet my entire sparkly handbag collection that some of you will not like them at all. But I bloody love them and their unapologetic weirdness. I'm inspired, intrigued and totally and utterly confused all at the same time. It's pretty darn wonderful. And that's before I even say anything about the actual wedding in the images - fake cotton wool clouds lining the aisle? OH MY GOD YES!

I have to say when I first laid eyes on Bodie & Beck's wedding I went all girlish and excited and started thinking very naughty thought about that party of groomsmen... I'm sorry, I'm sorry... but come on! How sexy are these boys? I even sneak peeked a shot of them on my facebook page (to share their beauty you understand) and... well... I've never seen so many smitten girls all in one place. It was pretty funny! So just when I thought it couldn't get any better, I saw the rest of the wedding! How gorgeous is the bride (hello tattoo envy anyone?!) In fact I just about cried with jealousy over how damn cool the whole thing is... and they are. I'm very professional indeed. I love this wedding more than life itself. Who's with me?

Are you ready to start the new year with a bang?! Oh boy am I! In actual fact I saved Gemma & Delaney's awesome wedding until today because of that very reason - I wanted to start 2013 as I mean to go on. Rock n Roll couples all the way baby! Gemma & Delaney were married in September at Rushton Hall in Northamptonshire. The elaborate backdrop worked so well as a contrast to their quintessential Rock n Roll and neo-postmodern 80s-inspired wedding. "We got engaged in Malibu in LA on holiday there a couple of years ago", began the bride. "It was a perfect sunset and totally spontaneous. Delaney had only brought the ring a few hours earlier from a gorgeous little antique shop in Santa Barbara. We were married a day after our 7 year anniversary."

As soon as I saw Amy's amazing fairy princess ball gown wedding dress I knew I wanted to see more of her wedding, but when I found out she and husband Stephen planned the whole thing for just £5000 I knew you'd be dying to see it too! The wedding had a 'fun and games' theme with 80s toys on the tables, an egg and spoon race and the bridesmaids (and bridesman!) carrying giant lollipops instead of bouquets.

en and Joe met at a Slipknot gig four years ago. They got talking and bonded at the bar over black Sambuca. When it came to planning their April 2019 wedding, there was only one theme that would work - heavy metal, of course!