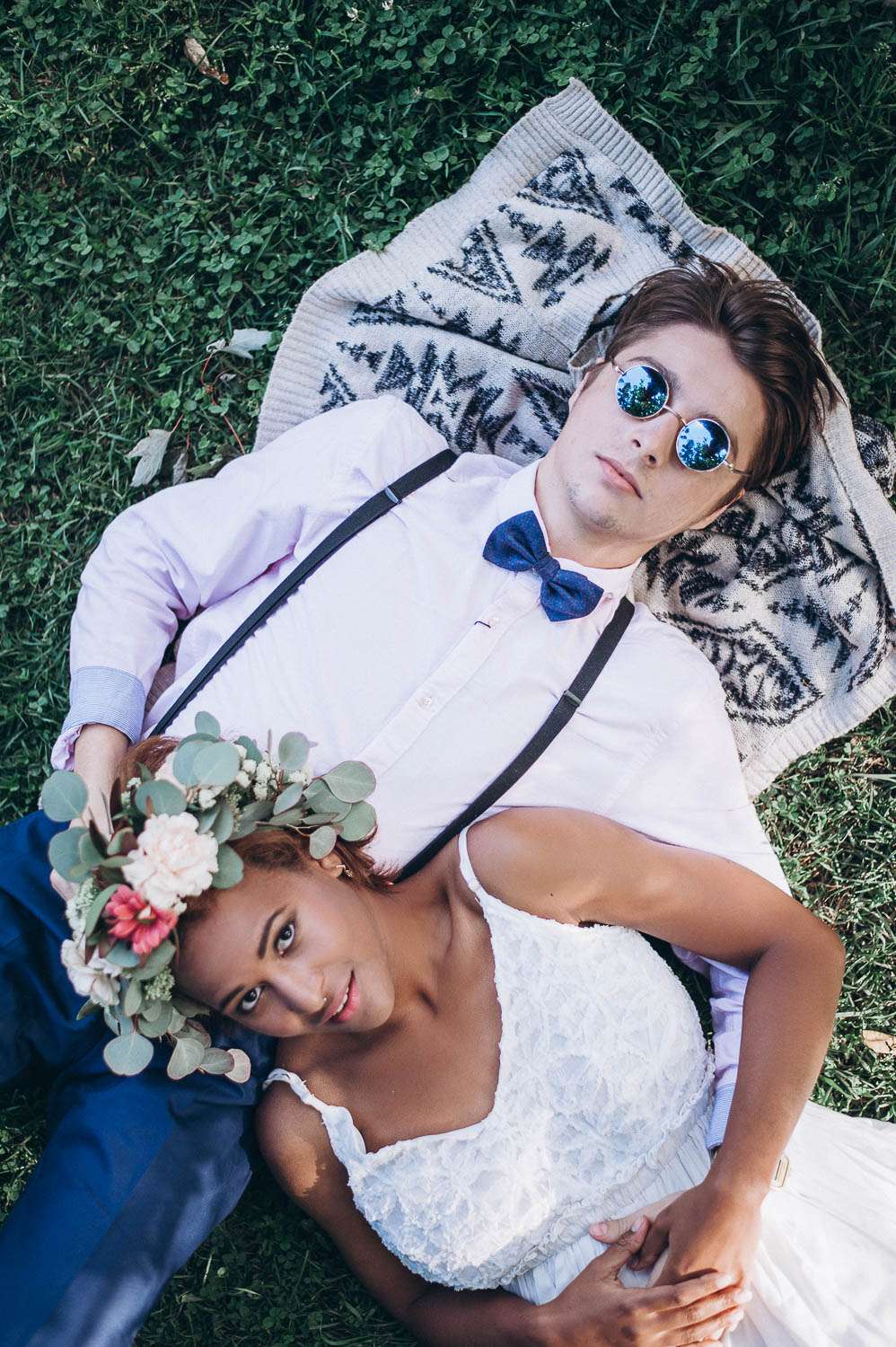 Using a real couple in a styled shoot is always going to raise the game. As well as getting to see the artistic licence and creative freedom of the wedding suppliers involved, you also witness the mad love and the chemistry of the couple hitting you square in the eyes. It’s a heady combination, as this shoot proves.

Marie-Line and Amiel, along with photographer Julia Garcia-Prat and her assistant Soha Isaatafreshi, took to the beautiful location of Mount Royal, the triple-peaked, green and idyllic hill that is the heart of Montreal in Canada’s Québec province, with the aim of capturing magic. 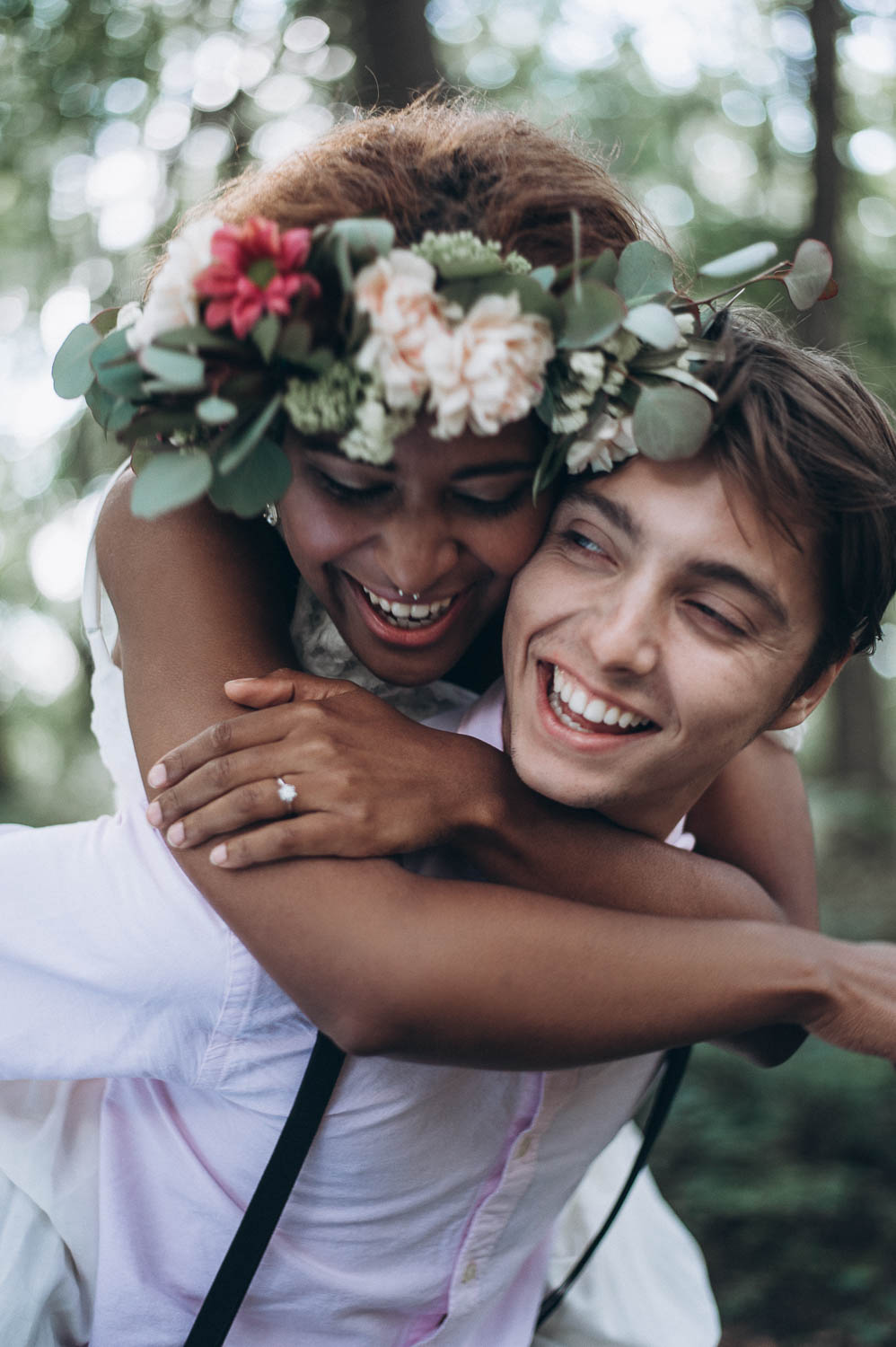 Mount Royal itself is the inspiration for this shoot, said Julia. “A stroll on this urban mountain tells you so much about Montreal’s spirit, and it’s where people from all walks of life are meeting, exchanging and connecting – LARPers, TamTam drummers, runners, yogis, hippies, couples who come to canoodle, and the ones who just dig the sunset while reflecting on modern buildings.” 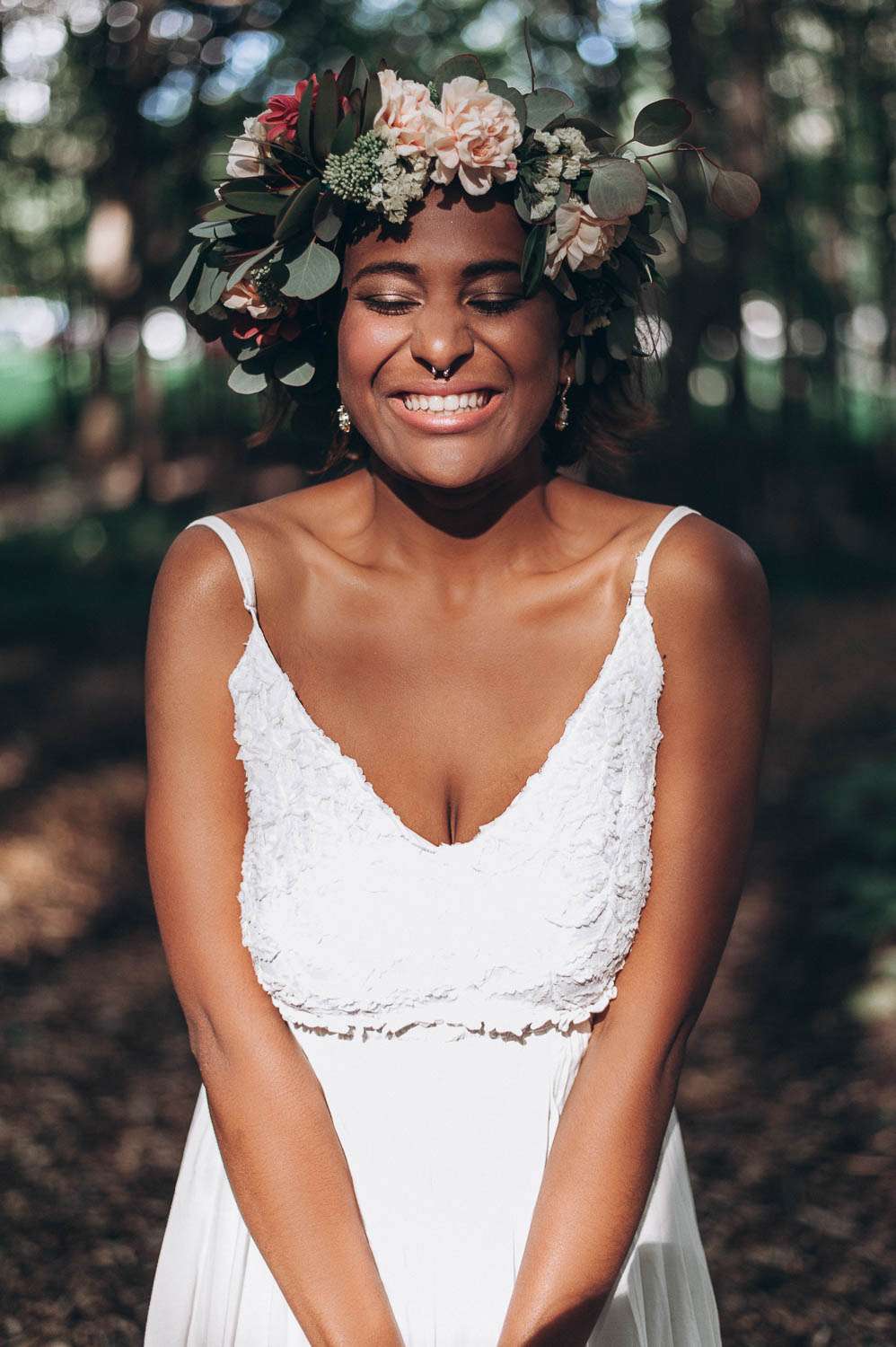 Julia described the pair as two big kids in love. “When they talk, only they can probably understand each other. They laugh all day every day and seize every opportunity to crack jokes, even when they fight. But like big kids, they are also very transparent: they tell each other everything without having to look for the best words. They don’t polish anything or try to fake it because everything is authentic and raw. They actually video called their friends on the day of the shoot and pretended they were going to get married for real, which their friends believed since they are so in love, and everyone was truly disappointed not to be at the ceremony!” 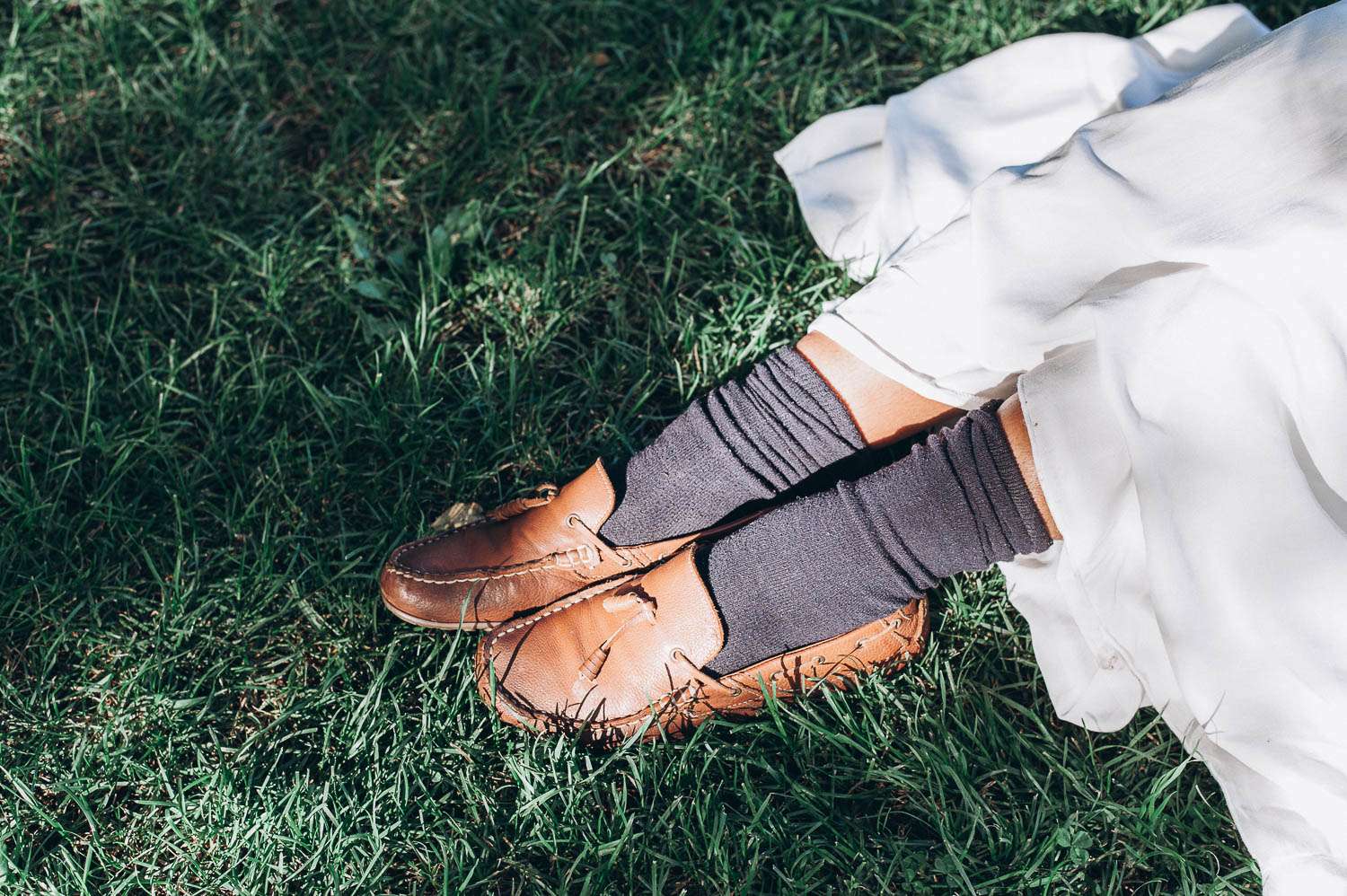 “Marie-Line is the most artistic and bohemian person at heart” said Julia. “Together, their fashion style is simple, without fuss or frills, because that is who they are. At one point, Marie-Line, who has some Native American heritage, wore her moccasins with comfy socks, just because!”

Stylist Marinelle Jean-Baptiste of Oh My! Glam Studio tapped straight into those laid back bohemian vibes with the addition of some ‘summer of love’ sunglasses and the beautiful cover-up jacket with the Native American design. While the bouquet and oversized flower crown by Sheena Savaria of Hellébore Créations Florales finished everything off with an attention-grabbing flourish. 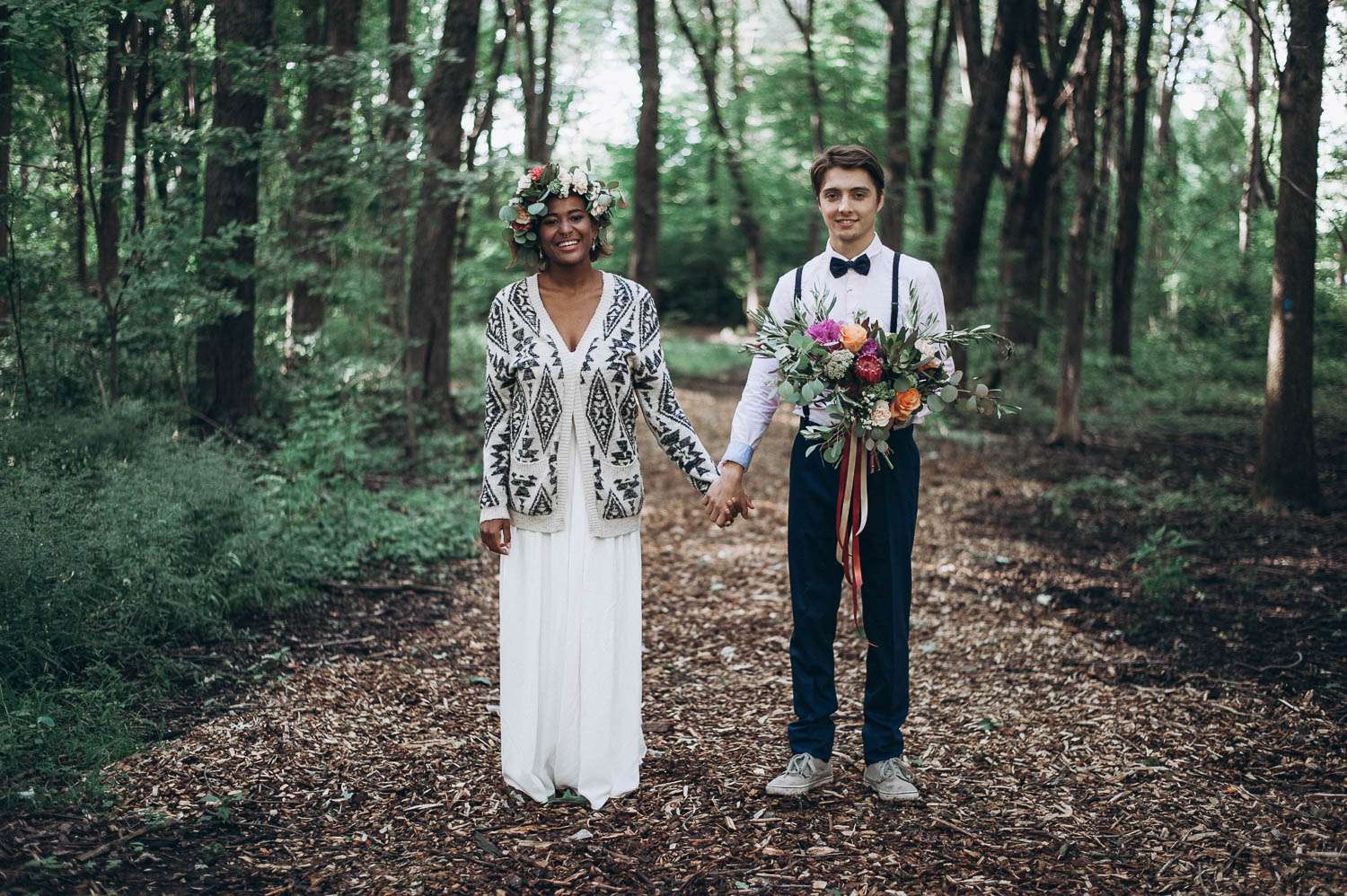 Julia said the feel of the shoot is very raw and organic (unconcerned with seeking perfection – whatever that is…), and so having Panka Csilla Kiss from Green Beauty by Panka do the make-up was spot on as she only uses vegan and natural products. She gave Marie-Line the most glowing skin, and those nude tones with a hint of sparkle just sing in the dappled light.

Julia knew this shoot would appeal to Rock n Roll Bride readers as it aimed to show real emotions, and real people, rocking their flaws and all. “The way they interact and how that was unfolding in front of the camera was so beautiful, and the pictures look real and genuine, which I feel is an inspiration for anyone so in love who want to be captured exactly as they are!” 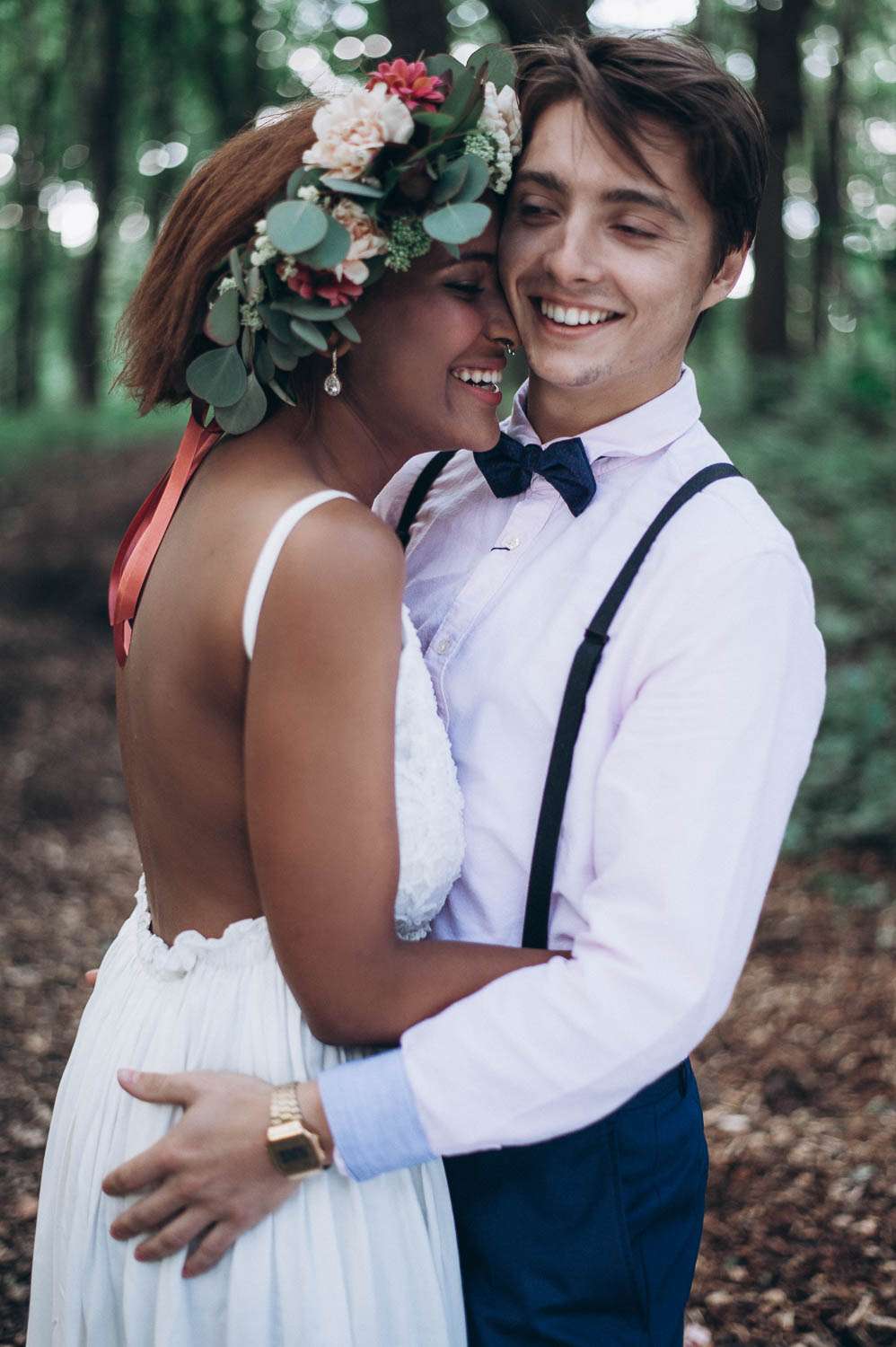 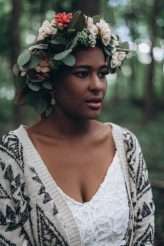 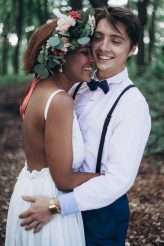 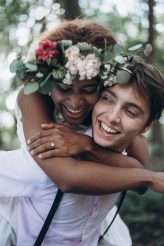 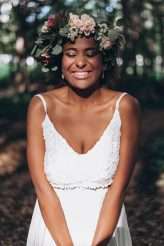 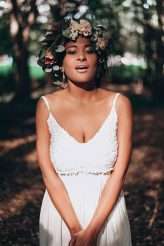 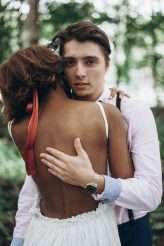 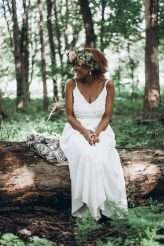 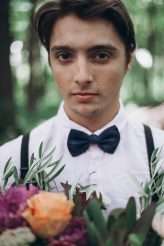 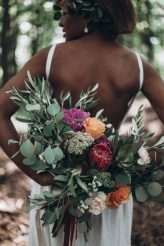 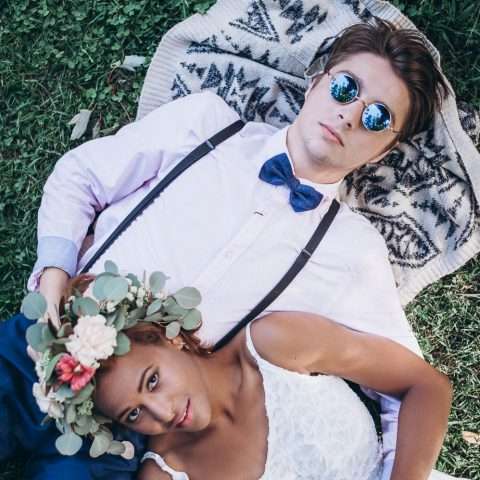 Forest Elopement with a Pregnant Bride!

What struck us most about the beauty of this styled shoot is just how rare it is to see pregnant brides featured in mainstream bridal media - for the most part we’re still being served these virginal images of slim brides dressed in white, and obviously, at Rock n Roll Bride, we ain’t down with that.

Inspiration can hit you anywhere, and for wedding photographer Lindsay Hite, it came while flicking through a fashion magazine. "The trend neutral colors paired with neon in fashion really spoke to me", she told me. "I love the almost surprising contrast between subtlety and outspokenness and was curious about how it would work in a bridal setting. I drew inspiration from far flung corners - from Lana del Rey's flower crowns, to bright bold colors of childhood celebrations and vintage circuses."