Ahh Alice in Wonderland weddings, what’s not to love? A childhood favourite of so many of us, it’s unsurprising that we see so many weddings themed around it. Meeli and Wout’s Wonderland wedding might just be one of the best I’ve seen though. Everyone looks spectacular in their costumes, and they’ve put so much effort into the décor.

The bride explains, “We were mostly inspired by Lewis Carroll books, both Alice in Wonderland and Through the Looking Glass, I also loved looking at the other Wonderland-themed weddings featured on Rock n Roll Bride. Prior to the wedding we watched many different Alice films but when it came to designing our wedding, we were strictly true to the books.” 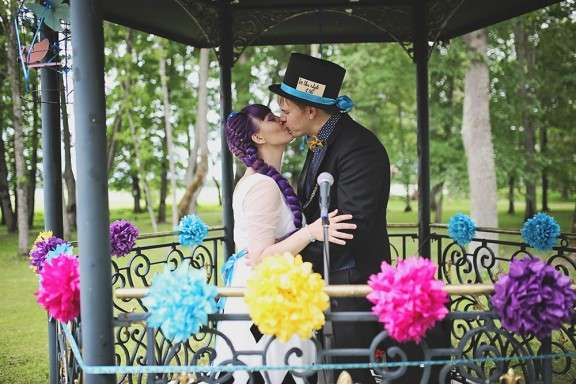 “One thing that we did very differently was the wedding ceremony”, she continued. “We had no officiant because, in our opinion, getting married is not about getting the approval of the state or god (we are not religious). It’s about making a promise to each other. So we wrote our own vows and read them out loud in front of our guests. As we had an international wedding, we did it in each other’s languages: I read my vows in Dutch and Wout read his in Estonian. We also had our guests bless the rings (every guest got to hold the rings and make a wish, but they had to say it out loud in front of everyone). The rings were handed to the guests by the best man wearing rabbit ears and the rings themselves were carried on the ears of a small bunny statue.” 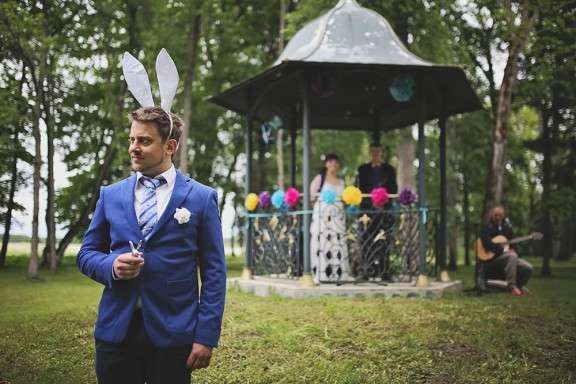 END_OF_DOCUMENT_TOKEN_TO_BE_REPLACED

Ahh Alice in Wonderland weddings, what's not to love? A childhood favourite of so many of us, it's unsurprising that we see so many weddings themed around it. Meeli and Wout's Wonderland wedding might just be one of the best I've seen though. Everyone looks spectacular in their costumes, and they've put so much effort into the décor.